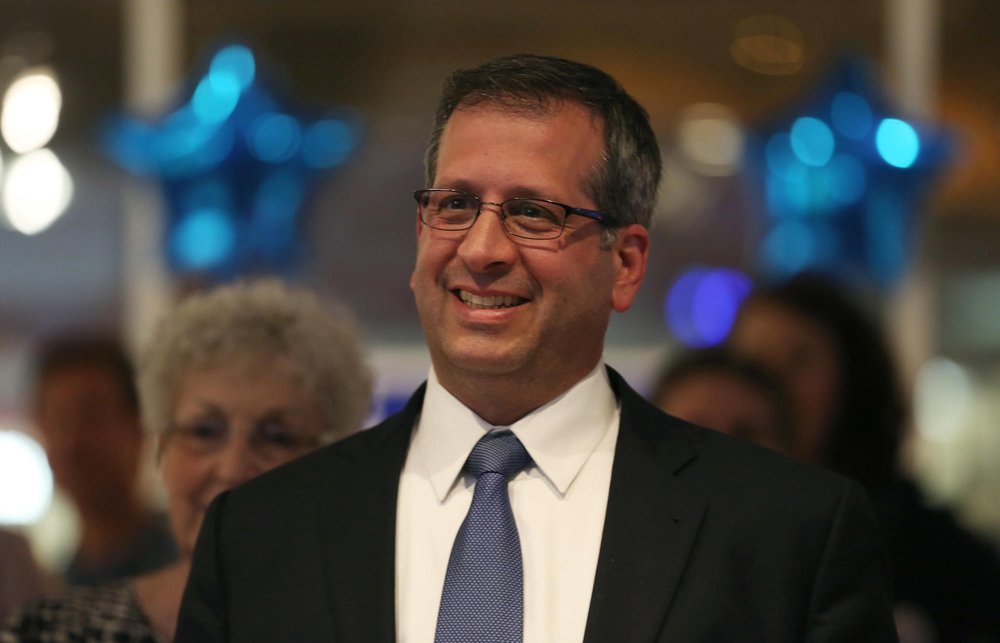 Truth be told, John Arena is known for many things, but truth telling is not among them.

In what is beginning to resemble an absurd plot in a cheap soap opera, 45th Ward Alderman John Arena is engaged in a nasty public feud with a select group of residents in the Jefferson Park neighborhood he represents in the Chicago City Council.

While many on the northwest side of Chicago are familiar with the war he has waged against residents opposed to his development plans for 5150 North Northwest Highway (5150) over the last 18 months, Arena’s current foray against inhabitants in this once-quiet neighborhood is cast at a distinct classification of homeowners who happen to be members of both the Chicago Police Department and the Chicago Fire Department. Unsurprisingly, racism figures prominently in Mr. Arena’s narrative.

Arena’s latest hustle revolves around a complaint he lodged with the Civilian Office of Police Accountability (COPA) and the Chicago Fire Department (CFD) against dozens of off-duty members of the police and fire departments who registered dissatisfaction with the alderman’s proposal to establish a Section 8 housing project in Jefferson Park on social media. Opponents to the plan for 5150 have long expressed concerns over the building’s height, neighborhood density, and overcrowded schools. As one may suspect, Mr. Arena insists the authors of the social media posts hold a deep loathing for minority groups. Charges based on tissue-thin evidence, Mr. Arena claims the posts on Facebook were racist in nature and in violation of the Chicago Police Department’s and Chicago Fire Department’s code of conduct.

Trembling and hysterical in a statement describing the Facebook posts, Arena moaned:

“I think officers, there’s a written book that says, ‘Here’s how you have to represent the office you hold.’ And we were getting comments from the general population saying they’re not comfortable seeing this coming from badged officers, that they’re identifying and bringing to us. So again, my job is to represent the totality of my population as it exists, which includes people who may be opposed to a development for whatever reason, but also includes people who are supportive of the development for their reason, and are coming to us saying this is intimidating, they feel like this is coercive.”

Mr. Arena continued to say he expected COPA to launch an inquiry and the matter to be handled “justly.”

A watchdog agency commissioned with exploring complaints against police officers, COPA’s most palpable trait is its hostility with police. Staffed by a junta of anti-police militants and entrusted with sweeping powers, COPA swiftly established a reputation for lusting after police blood after its creation. Aware of the fact COPA delights in the opportunity to ensnare police, Mr. Arena reacted with the speed of light to file his groundless complaint.

Mr. Arena’s protest against police officers and firefighters residing in the 45th Ward follows a string of humiliating defeats he suffered over his proposed development plans for the property at 5150. Since rolling out the plan under dubious circumstances in January 2017, Arena was handed his first loss by the City Council in March 2017 in a hearing to re-zone the patch of land. The loss in the city’s legislative chamber was followed by reversals at the hands of the Illinois Housing Development Authority (IHDA), which twice rejected applications for tax credits to fund the project in September 2017 and May 2018. Amid those setbacks, Arena was forced to wave the white flag in February 2018 and scaled back the original plan for a proposed 100 units to 75. Since incurring the May IHDA loss, the 5150 project has remained in purgatory.

A man known to rage at others for his own misjudgments and failures, it is no irony Mr. Arena filed the complaint with COPA in January 2018, a moment in which residents were registering their concerns on Facebook and the IHDA was weighing the extension of tax credits for the project for a second time. To date, those falsely accused by Alderman Arena have yet to be notified.

Mr. Arena’s complaint filed with COPA is a frantic cry of hurt.

A grievance rooted neither in principle nor fact, from the moment John Arena unveiled his proposal to develop 5150 in January 2017, the alderman has interpreted every form of objection to the development plan as a personal affront. False and misplaced outrage, Facebook posts which Mr. Arena should have dismissed as petty annoyances unworthy of his attention are now being manipulated by the alderman to malign residents unwilling to endorse his plan for 5150 or assent to his political orthodoxy. A true practitioner of noxious politics, Mr. Arena’s protestation filed with COPA and the CFD is not an ordinary use of elected office to uncover and extinguish alleged bias among police and firefighters living in the 45th Ward, but a classic example of an elected official abusing public office to exact retribution against residents.

As disturbing as Arena’s singular ruthlessness may be, one of the most striking flaws in his fraudulent charge of racism is the fact the alderman refused to furnish a shred of evidence of “racially-charged” comments in the Facebook posts or disclose how the posts were uncovered. Declining under the hackneyed pretense the matter is “under investigation,” Arena’s withholding “evidence” of “racially-charged” social media posts only saps the strength from the allegation the posts are as shocking as he publicly contends. This tactic, the concealing of facts, is a pivotal feature in Arena’s strategy to smear police and firemen in the 45th Ward: It is further proof of Arena’s deceitfulness. Unconcerned with any final outcome to the case, Mr. Arena’s expectation is the matter will gradually fade with the only lingering memory of the incident having him emerging as a hero idealized for having the mettle to unmask “racism” and police officers and firefighters tarnished as a scurvy band of online racists.

Similarly, as content as Arena finds himself with this false charge, it is every bit as troubling how his accusation is interpreted by eyewitnesses to the spectacle. A ruse fabricated to befoul the character of opponents of the alderman’s 5150 plan, by omitting or blurring vital facts related to his allegation, Arena’s purpose is to have uninformed bystanders to this incident assume the worst in those whom he has implicated. While the Facebook posts by the accused may have revealed a mischievousness, some vulgar language, or in some instances of a coarser side of human nature, in the absence of any evidence, Arena is perfectly satisfied leading oblivious witnesses to believe it was Bull Connor pounding on a keyboard churning out racist passages in front of a computer screen. A nihilistic, egomaniacal gasbag, Alderman Arena concealing presumed damning evidence to support his assertion the accused were motivated by bigotry exposes his true intent is to scandalize Jefferson Park residents with wild, unsupported claims of racism and mercilessly bully residents he now deems as permanent political adversaries.

If John Arena did not live by a double standard, he would have no standard at all.

A serial abuser of social media himself, Arena’s complaint with COPA and the CFD is entirely hypocritical and evokes memories of his online tantrum in February 2017. In a spontaneous combustion moment in which he pitilessly harangued constituents on Facebook, Mr. Arena beclowned himself in a series of appalling and subliterate posts branding residents intolerant and racist from his official Facebook page. Although the conniving Arena scrubbed his obloquy from public view, his artless posts directing animus at Jefferson Park residents have not vanished from his constituents’ memory. It is a paradox that Arena, a political grifter, now demands a probe of city employees for engaging in similar behavior.

In like manner, Mr. Arena’s antics and false charge call to mind the disgraceful behavior of his wife Jill, the princess regent of Jefferson Park, who showed no compunction in defaming the honest character of peaceful protesters demonstrating against the alderman’s shifty plan to upzone the 5150 property to carry out his plan for the Section 8 housing project. Captured on tape, it, too, is worthy of re-visiting.

What is the point of leadership according to John Arena’s principles?

Essentially a rinse-and-repeat performance, by hollering racism anew and stigmatizing firefighters and police officers who reside in the 45th Ward, Mr. Arena is revealing himself as a man whose methods are cruel; he is a man filled with malice; and, most important, he is consumed with an insatiable desire to humiliate others. Moreover, it is the torment he inflicts on his critics: It is smug and delivered with an air of overconfident sanctimony, as if those who challenge him are to be taught a lesson or are getting their due.

Another deeply concerning aspect of Mr. Arena’s action involves the impact of his behavior on the whole of Jefferson Park. In order to achieve his warped vision of a Progressive utopia in the 45th Ward, John Arena has been required to traverse political territory in which he has often crossed boundaries separating permissible lies of authentic politics and the minefield of unbearable fabrications associated with harmful politics. Mr. Arena’s concocting malicious fantasies charging widespread racism among residents in the neighborhood are not tolerable lies; they injure; it has created an atmosphere of distrust and anxiety inside and outside the community; and it has torn the neighborhood apart. An example of poor governance, Mr. Arena’s bearing has divided residents in the 45th Ward into two opposing camps. Unforgivable conduct, for his role in devastating the neighborhood, Mr. Arena’s name will forever be synonymous with demagogic slander.

It is also important to note there is a despicable quality to his charge of racism and how it further damages the reputation of police officers: Law enforcement across the nation has suffered terribly owing to the endless cascade of hyperbole and inflammatory accusations alleging widespread racism among police. While police officers have come to expect incendiary attacks from anti-police activists, for an elected official to hurl opprobrium at police officers for political gain is reprehensible. However, in Arena’s unhinged mind, his actions are defensible regardless of how hateful, false, or ridiculous his charge against police officers or firefighters may be.

In his overcaffeinated response to residents’ Facebook posts, Arena mentioned a “written book” declaring a code of conduct according to the “office you (police officers and firefighters) hold.” Bearing in mind Arena’s misuse of social media platforms in which he hurled aspersions against innocents, should police officers and firefighters face a disciplinary hearing and punishment for their activity on social media, they may be best served to claim in their defense they were only following Alderman Arena’s fine example on Facebook.

What John Arena deserves is a thumping at the ballot box.