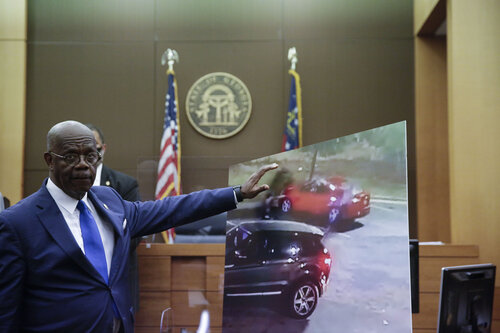 To frame Atlanta police officer, Fulton County prosecutor can learn from a model perfected in Chicago.

If ever a city hellbent on slipping down a pipeline to mob rule and corruption needed the help of Chicago, it is now.

The anti-police narrative Chicago elites have cultivated to great success in attacking the foundations of justice in this city the last four decades is in danger of not holding in Atlanta, a city where a police force comprised of nearly 50-percent African American officers is walking off the job in response to the decision by hack prosecutor Paul Howard to gin up criminal charges against an officer in a fatal police shooting.

Rayshard Brooks resisted arrest for drunk driving, assaulted two officers, stole one officer’s taser, fled, then pointed the taser at the officer in pursuit, Garrett Rolfe, who then fatally shot Brooks. If ever there was a text book example of justifiable use of force, the video of this shooting would be it. Nevertheless, Howard, in a speech reminiscent of the anti-police babble devoid of facts by Chicago’s own prosecutor, Kimberly Foxx, announced he was pursuing felony murder charges against Rolfe.

Talk about a courageous public servant.

The fatal shooting of Rayshard Brooks in Atlanta is clearly unlike the death of George Lloyd in Minneapolis, which generated disgust from officers nationwide and re-ignited the anti-police movement months before the next presidential election. The death of Floyd in Minneapolis provided the extremists who now control the Democratic Party with crucial imagery they could use to shield the overwhelming statistical evidence that the police do not disproportionately use lethal force against African Americans and are not racist. Their attempts to create the same narrative with the imagery of the Atlanta shooting won’t be so easy, despite Howard’s cowardly succumbing to the mob pressure of the anti-police activists.

That blowback from Howard’s decision has already started. Cops in Atlanta are walking off the job. Many people throughout the country are furious.

Right off the bat Howard has proven himself a prosecutor deserving of assistance from Chicago’s chic radicals, a prosecutor wholly unwilling to do his job and instead willing to bow to the leftist mob, just as Chicago’s top prosecutor, Kimberly Foxx, who, despite the rampant corruption in her administration, stands to earn re-election as an activist prosecutor willing to criminalize the police and lionize criminals.

For just as Foxx has released convicted murderers in deference to her ideological allies despite her predecessor insisting these very same offenders were guilty, so too has Howard trumped up a sham narrative to justify felony murder against police officers in the Rayshard Brooks case.

One of Howard’s first calls should be placed to Foxx to see how he can get away with this decision to indict Rolfe. Foxx could provide great counsel, telling Howard how she has exonerated violent felons and managed to drop charges against Jussie Smollett. Likely she will recommend bringing someone like Bobby Rush, the former Black Panther calling for violent revolution and killing “the pigs,” now a congressman, before the public. Rush’s bizarre and sinister take on the police, America, and justice could prove crucial for Howard, just as it has done for Foxx.

Journalists, too, can play a part in Howard’s ploy. Howard desperately needs numerous Chicago journalists. In fact, the entire cabal of criminal justice, anti-police reporters from the Chicago Tribune, Jason Meisner, Megan Crepeau, Dan Hinkel, and Rosemary Sobol, and Jeremy Gorner, are absolutely necessary. Without these activist journalists relentlessly pushing the cops-are-criminals narrative that Howard has now put in motion, there is too great a risk that the truth could get out in the open. No, this narrative needs to be guarded with an almost Soviet-like militancy, and these are the reporters who can do it.

Journalists, however, are not enough:  You need to top off this cabal of reporters with a set of smarmy, self-aggrandizing, self -righteous columnist who will put the whole narrative in context. Mr. Howard needs Eric Zorn from the Tribune. Heck, Howard could accept the help of Sun Times columnist Neil Steinberg for good measure. This is going to be a tough one.

To help with his fraudulent case against Atlanta police, Howard should put Chicago’s media army on a bus.  During the long ride down to Atlanta, these reporters can use the time to review all the successful “journalism” campaigns these media members have engaged in over the last three decades to bolster cases against police, carefully ignoring key evidence that exonerates officers and submissively caters to their extremist overlords, particularly the “civil rights” law firms for whom they are little more than lap dogs.

With their vast experience extolling the “innocence” claims of once convicted killers like Anthony Porter, Madison Hobley, and Nevest Coleman, and dozens of others, the transformation of the Atlanta police into criminals in this case is entirely feasible.

If all else fails, Chicago can send down the “reporters” from the Invisible Institute, a so-called media outlet supported by civil rights law firms. Jamie Kalven, one of their reporters, could find a witness kept hidden from the law enforcement officials investigating the shooting who will turn up and provide key testimony against the officer, just as Kalven did against the officers involved in the Laquan McDonald shooting.

Mr. Howard is definitely going to need “civilian oversight” to pursue his cause and keep this story alive. Here again, Chicago will deliver, and big. If Howard can get members of the Chicago Police Board to go down to Atlanta, it would prove a great asset. The Board could be counted on to cook up some ludicrous ruling against the officers’ actions, just as it did against Robert Rialmo, fired for shooting a man who was swinging a bat at his head. What difference does it make if such rulings leave the entire CPD completely unsure of what force they can and can’t use? So what if the more Chicago residents are killed in the crossfire? So what if more cops are injured and murdered?

We are talking about a greater good here.

Perhaps Howard could even talk the head of the police board, Ghian Foreman, into coming down to Atlanta and demonstrating against the Atlanta Police Department, then claiming excessive force against officers, as Foreman recently did in Chicago. That’s right. The head of the “independent” Police Board was out demonstrating against the police. Despite this obvious conflict of interest, this clear sign of a bias, Foreman’s actions generated little coverage in the media, and not one call questioning his fitness to lead the Police Board.

Howard can certainly find use for use a feckless little bureaucrat-activist like Foreman.

Perhaps the most crucial piece of Howard’s sordid puzzle is an Inspector General. Howard needs someone on the inside of the Atlanta city government willing to violate the officer’s constitutional rights, someone who will compel the officer to testify on the claim that IG’s office is merely conducting an administrative inquiry, then use that testimony to further bolster charges or create others, the way Chicago’s Inspector General Joe Ferguson did to officers who responded to the Laquan McDonald shooting.

Howard needs an IG like Ferguson, who will turn a blind eye to the rampant corruption in Chicago Public Schools, in civilian oversight agencies and Chicago city government, such as illegal leaks to media and concealing evidence that exonerates accused officers.

And of course, Howard needs lots and lots of progressive elected officials, for whom political power exists on little more than the clever, relentless playing of the race card and for whom the Constitution holds little more reverence than cat litter.

It’s likely Howard won’t get all the help he needs from Chicago. The human decency so long absent in the bloodbath that is now Chicago has not yet spread to the rest of the country. The political experiment of putting a machine hack politician from this swamp into the presidency is slowly revealing itself, not through the media but through the great silent majority who thinks a republic, no matter how flawed, is worth saving.

The fact that the Russian collusion scandal failed, and failed miserably, is one sign that such is the case and more evidence may loom on the horizon of the DOJ under William Barr. Anti-police narratives like the one Howard is pushing in Atlanta are generating a backlash.

Lines are being drawn, all before a crucial election.