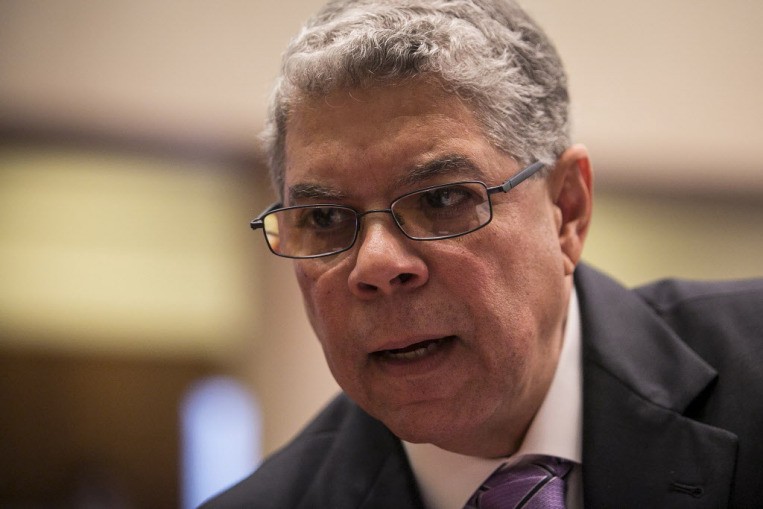 In the early morning hours of Sunday June 18, 2017, Chicago police officers involved in securing a crime scene in the Humboldt Park neighborhood happened upon a most unwanted visitor, 26th Ward Alderman Roberto Maldonado. Approaching officers under the guise of a humble resident seeking aid from police, Maldonado, in the full plenitude of power, quickly revealed himself to be an insurgent waging his very own guerrilla war on Chicago police officers. Armed with a cell phone camera and coveting a moment in which he could furnish irrefutable video evidence of police misconduct, Maldonado’s juvenile and witless effort only produced a seven-minute blooper reel in which he is seen repeatedly beclowning himself as he ignominiously ploughs into a crime scene, trumpets his position in the Chicago City Council, berates officers, and refuses police assistance to his doorstep. Following his awfully, sadly undisciplined performance in front of the cameras, Maldonado promptly filed a complaint with the city, claiming officers were “rude” to him during the affair. While it is unclear whether Maldonado was initially aware he was recorded by a police bodycam, the police videotape made available to the public by the department exposes the lack of civility in this incident rests entirely with Alderman Maldonado.

Like all things Maldonado, the attempted attack on police by surprise was organized on the fly and is fraught with failure.

Although the dawn of this episode is not captured by police bodycam, it begins with one officer approaching the position in which Maldonado is unquestionably receiving alternate directions to his home from a second officer to avoid a crime scene from being disturbed. Alternatively asking rapid-fire questions and abruptly cutting off officers attempting to answer his inquiries, Maldonado is seen sourly dismissing every option offered to arrive at his home, which was located within the secure crime scene. When Maldonado asks if officers will drive him to his home, one police officer asks if the request is made in his capacity as a member of the City Council or as a citizen. Pivoting, all of a sudden, Maldonado reverts to an ordinary citizen and is instructed by an officer to search for a legal parking spot and proceed to his home on foot to avoid intruding on a crime scene. Aghast at the vision of a man of his aristocratic bearing being forced to trudge on a sidewalk, Maldonado bitterly rejected the recommendation and replied: “I don’t want to do that; I don’t need to do that.”

It is here, however, at the three-minute mark in the video, where the graceless and combative alderman commits his fatal error and renders his attempted ambush useless: He confesses to police his motive at the crime scene is to “test officers’ power.” Visibly angry over police officers refusing to take his bait, Maldonado embarked on a wandering soliloquy in which he demands police put themselves in his position regarding the safety of his “three little ones,” reminds police officers of his official position in the City Council, refers to Humboldt Park as “his” neighborhood, and proceeds to hurl the incendiary charge police officers bear sole responsibility for the Chicago Police Department suffering a poor public image. “This is why the police officers are in such, the police department are in such bad shape with the citizens, okay,” Maldonado screeched.

Alderman Maldonado has cried wolf so many times no one hears him now.

Let’s state the obvious: A man inveterately hostile to the Chicago Police Department, Maldonado’s backbone on the morning of the 18th was the fact he is a member of the Chicago City Council. Despite his sanctimonious pose of ordinary citizen, Alderman Maldonado was never seeking guidance on how to arrive home and no police cooperation would have satisfied his queries. To the contrary, the alderman’s sole objective was to achieve a propaganda windfall through a domino effect: Orchestrate a video ambush of police officers, coo over the tape with his anti-police allies, witness the video “go viral,” and rejoice as his rank among Chicago’s anti-police crusaders was elevated to martyr stature.

But by verbally targeting police officers whom he saw as fundamentally vulnerable on June 18, Maldonado conducted himself unlike a dignified alderman or responsible citizen and behaved as a hired gun for the anti-police grievance industry. Had Maldonado been acting in the best interest of the community he purports to represent, he would have announced to police his position in the Chicago City Council, praised officers for their response and professionalism, and immediately extended an offer of help to his counterparts in the Chicago Police Department. Unable to curb his worst impulses or stifle his loathing for police being the energetic anti-police demagogue he is, Maldonado was damningly silent over the fact a violent crime had been committed in his neighborhood and was neither heard on police bodycam inquiring over the nature of the crime nor uttering a word of concern for its victims. In Maldonado’s unhinged mind, the crime scene just steps away from his home presented him with a unique opportunity to throw oxygen at smoldering anti-police flames and skewer police with a volley of insults.

Is this a surprise from Maldonado? Not in the least. The answer for his infantile theatrics is found in his simmering resentment toward the Chicago Police Department, the center of which he maliciously insists is a hard core of malevolence, thieves and renegades. A most repellent figure in Chicago politics, Maldonado is a pathological confidence trickster and this video provides ample material to refute Maldonado’s ludicrous claim of police “rudeness.” A man with a grandiose sense of himself and a very strong sense of entitlement, Maldonado attempted to taint police with all the self-congratulatory and patronizing paraphernalia of a gallery-player who believes his imagined good intentions and fraudulent virtue should allow him to malign with a method he would denounce as bigoted and inflammatory if directed at himself. Furthermore, the 26th Ward alderman is convinced his audience will see he is respectable and on the side of the angels because he is an alderman and those he targeted were Chicago police officers. Vanity is a back-breaking quality to confront in anyone, but it is remarkably difficult to accept from one who is so flagrantly dishonest, incompetent, and intellectually shallow. Most Chicago aldermen have healthy egos, but this video demonstrates Maldonado fits in a category all in his own. Unfortunately, this is the Maldonado way: The truth is always an implacable foe.

A god-awful liar and ignoramus, Alderman Maldonado believes he is not required in any way to provide a complete or even logical reason for his attempt to goad police officers on June 18 and has dodged the media seeking an explanation for his ill manners. While Maldonado will neither bear any shame for his puerile behavior on the 18th nor ever acknowledge his numerous contributions to damage the reputation of the Chicago Police Department, 14th District police officers present at the crime scene should welcome any examination into their conduct that night and his frivolous complaint lodged with the department should only elicit a roll of the eyes.

One final thought: The alderman mentioned his “three little ones” repeatedly on the 18th. Maldonado also demanded police put themselves in “his” position when discussing the safest alternative route home due to the crime scene in “his” crime-ridden neighborhood. It was 2:43 a.m. What responsible parent has their “three little ones” out at 2:43 a.m.? Aware of the fact Chicago’s streets tend to be dangerous at night and staring down an alderman more concerned with disparaging police than bloodshed on the streets, it is a safe bet the children of police officers were tucked in at home, unlike Maldonado’s children who were out with their alderman father, who was grandstanding at 2:43 a.m.

By exercising such lousy parental instincts, it is doubtful Alderman Maldonado will be nominated for a “Father of the Year” award anytime soon.