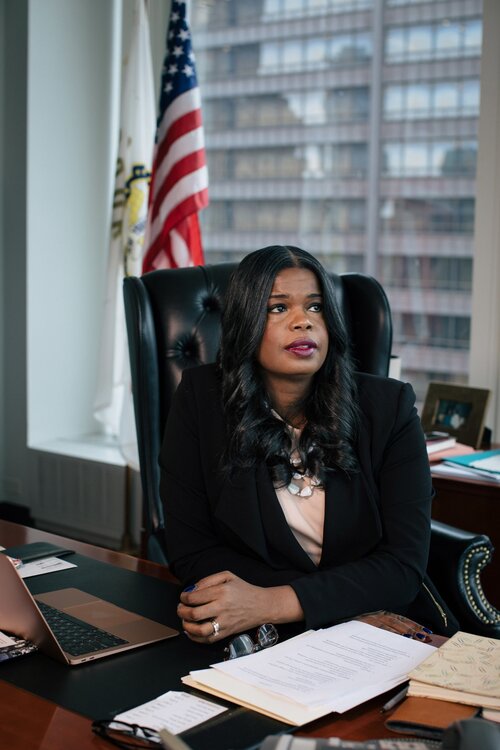 Kim Foxx continues her mission to rid Chicago of its fuddy-duddy ways.

A day which ends a 47-month journey but also marks a beginning, graduation ceremonies at the United States Military Academy are steeped with tradition.  Held on a Saturday in late May, cadets fill out rows on Blaik Field as they listen attentively to a line of dignitaries, figures accomplished in the field of public policy, and chief executives, all of whom remind candidates of the weight of their responsibilities which come with a West Point degree.  Surrounded by family and underclassmen who watch intently, as candidates smartly dressed in white hats, ash-gray uniforms, and white trousers anxiously await to receive their commission, cadets take an oath, they sing “The Army Goes Rolling Along,” and they receive a benediction from a West Point chaplain.  Following the invocation, West Point’s superintendent issues his final order to the First Captain of the U.S. Military Academy’s Corps of Cadets, who barks out:  “Class dismissed!”  Upon hearing the final dismissal order, graduates cast 1,000 white hats high into the air.

The hat toss, as it is known, may seem irrelevant, but it is a deeply felt expression of personal achievement.  The tradition of the hat toss at West Point symbolizes the corps of cadets’ successfully meeting all the academic, physical, and military requirements to be commissioned a 2nd Lieutenant in the United States Army.  Though cadets also find great pleasure in presenting their cadet saber to family and having parents pin gold insignia bars on uniforms, the hat toss remains the archetype image depicting a rite of passage at West Point.  A crowning achievement, the hat toss is the moment beyond which newly commissioned officers accept a personal and institutional responsibility, are expected to act decisively and forthrightly, and instill in others what has been instilled in themselves.  In sum, the West Point hat toss teaches new officers there is value and meaning in tradition.

Like West Point, the Cook County State’s Attorney’s Office (CCSAO) has its share of revered customs.  This was, of course, until Kim Foxx was elevated to office.  A woman whose hostility to the conventions surrounding the prosecution of criminals is generally understood, on Friday, June 19, Ms. Foxx spat upon yet another revered institution, the practice of “tie-cutting.”

A celebration of a victory over crime, under the long and noble practice of “tie cutting” the first chair in a felony case creates an office file embellished with a second-or-third chair ASA’s name, the case title, and the charges against the felon.  A unique moment for all ASAs, the sleeve is created by the first chair to recognize the junior ASA’s role in achieving a felony conviction in a jury trial.  A junior ASA’s first courtroom triumph against a defendant charged with a felony, the purpose of the file folder is to confer prestige and respectability onto the junior ASA for delivering a first knockout blow at crime from inside a courtroom.  Only the initial stage of the “tie-cutting” ritual, once the sleeve is created, the junior ASA involved with the felony case gathers with office colleagues for an informal ceremony organized by the first chair in the case.  A step in the rite in which the venerated ASA allows the first chair to cut personal clothing to adorn the sleeve, per form, female ASAs sacrifice hosiery; for male ASAs, neckwear is preferred.  To conclude the ceremony, the swatches of fabric are stapled to the file by the first chair and the folder is suspended from a wall in the office of the unit with which the ASA serves.  A most precious and vivid memory, many ASA feel privileged to re-live the moment by returning as first chairs to oversee the rite for second chair ASAs.

Though a rite of passage to commemorate an ASA’s first successful stroke at criminal activity, the practice has been abruptly halted by order of Assistant State’s Attorney Risa Lanier.  A top Foxx aide, according wisps of rumor seeping from the State’s Attorney’s office, in a missive sent to office staff following a Juneteenth address by First Assistant State’s Attorney Joseph Magats, Lanier informed county employees the “tie-cutting” tradition was to be discarded and all file folder walls dismantled and destroyed.  Lanier continued to lay out a schedule for the removal of the jackets from all Cook County offices by June 22 and to deliver a stiff warning ASAs were not to remove any commemorative folder.

In an e-mail to Cook County ASAs, Lanier wrote:

“I would like to reiterate the points made by the First Assistant.  This office stands committed to our core mission, to do justice in the pursuit of healthy, safe and thriving communities, with a priority and emphasis placed on our internal SAO community.”

“We must endeavor to uphold our shared values and be the people who we say we are, which is people who treat one another with respect, integrity, fairness……”

“As such, the “wall of trophies” will be removed from each location and destroyed by a Bureau Chief.  No one should remove the “trophies” from any location.”

A trimmer of the truth, before any discussion over the motivations behind Ms. Foxx taking an airbrush to CCSAO history is examined under a microscope, it is vital to dismantle a king-sized fiction advanced by Ms. Lanier in her e-mail to county employees.  Though Lanier refers to a “trophy wall” and “trophies” in her communiqué to county employees, previous to Ms. Foxx ascending to the prosecutor’s office, no ASA or county employee ever referred to the practice of creating a file or the “tie-cutting” rite celebrating a felony jury win as a “trophy.”  This is a delirious fabrication invented by Ms. Foxx, Ms. Lanier, and the gang of Progressive fantasists who have expropriated the CCSAO.  A falsehood aimed at stigmatizing file folders and the “tie-cutting” as a demonic ritual praising the criminal conviction of minorities, prior to Ms. Foxx entering office, the folder and “tie-cutting” ceremony was universally referred to by ASAs as “tie cutting.”  A manipulation of language Orwellian in scope, Foxx’s incentive for consigning “tie-cutting” to the dustbin of history is the tradition now fails a Progressive purity test.

This is not the first occasion in which Ms. Foxx has targeted the practice of creating files or separate CCSAO customs or traditions.  Almost immediately after taking office in 2016, Foxx swiftly ordered the CCSAO Gangs Unit to strip from its walls booking photographs of felons provided by the Illinois Department of Corrections.  Though the mugshots were images of felons guilty of monstrous crimes and ASAs mounted the images as a tribute to the removal of criminals from the streets, an outraged Foxx demanded their elimination.  Shortly thereafter, in a move which concurred with the scrapping of the Narcotics Bureau, the dyspeptic Foxx continued her offensive against the folders, quietly removing them from the former bureau’s office.  Though these customs served to build unity of purpose among ASAs, represented ASAs fulfilling their duty, and had been enjoyed by many young ASAs for decades, Foxx believes there is a sinister implication to memorializing the successful prosecution of violent criminals.

In Foxx’s warped mind, a “tie-cutting” ceremony, the presence of file folders marking felony convictions or mugshots gracing the walls of the CCSAO is an emblem of race-based persecution or oppression.  A woman who thinks only in terms of oppressor and oppressed, Foxx views an ASA performing the mission of criminal prosecution an act of aggression or oppression against the weak or vulnerable.  The CCSAO, Foxx insists, had for far too long served as an engine to engage in the harassment and prosecution of minority communities to keep minority communities checked or incarcerated.  To Foxx, to create a memento marking a successful prosecution of a violent criminal speaks the language of oppression and is both provocative and dehumanizing.  In Ms. Foxx’s worldview, the CCSAO should be non-offensive.  Although Foxx’s entire oppressor-oppressed conception is deeply misguided, it is the flywheel propelling her reform efforts, principally the dialing back on the prosecution against some violent offenses, low-level offenders, drug crime, and support for bail reform.  Although her policies have manifestly failed Chicago residents, particularly minority communities inordinately victimized by crime, Foxx has nevertheless maintained the reform measures by painting her criminal justice reform measures as balm and portraying herself a Progressive prophet and redeemer.

Though Foxx now castigates the “tie-cutting” ritual, her call for its end exposes a contradiction bordering on supercilious hypocrisy:  As an ASA in 2009, Ms. Foxx blissfully underwent a “tie-cutting” ceremony.

Olympic-level hypocrisy, though Ms. Foxx was praised for her courtroom efforts and rewarded with a file, Cook County’s “woke” prosecutor now declares the “tie-cutting” practice intolerable.  A double standard so glaring to belabor it extensively is wooing obsession, to Foxx the “tie-cutting” ceremony is acceptable until Toni Preckwinkle and money cannon George Soros privately register dissatisfaction.

File folders and a “tie-cutting” symbolize the maturation from a youthful, apprentice ASA into a veritable prosecutor.  A cherished rite of passage among ASAs, “tie-cutting” and the file folder also represent a commitment to and a competence in the fight against crime and the just deliverance of violent criminal offenders to well-deserved imprisonment.  It is also a weighty moment in which an ASA realizes they are obligated to lead and be a part of an institutional climate which demands the same excellence in the fight against crime from fledgling ASAs.  Most important, there is a private majesty to the “tie-cutting” ceremony:  It serves as an enduring testament to the victims of crime.

Kim Foxx has forgotten about victims of crime.  A woman with the feelings and faculties of a little child, Kim Foxx views file folders and the “tie-cutting” ceremony as both wrong and spiritually noxious.  Instead of celebrating her ASAs’ professional growth with a bit of festive cheer, Kim Foxx prefers shaming them.