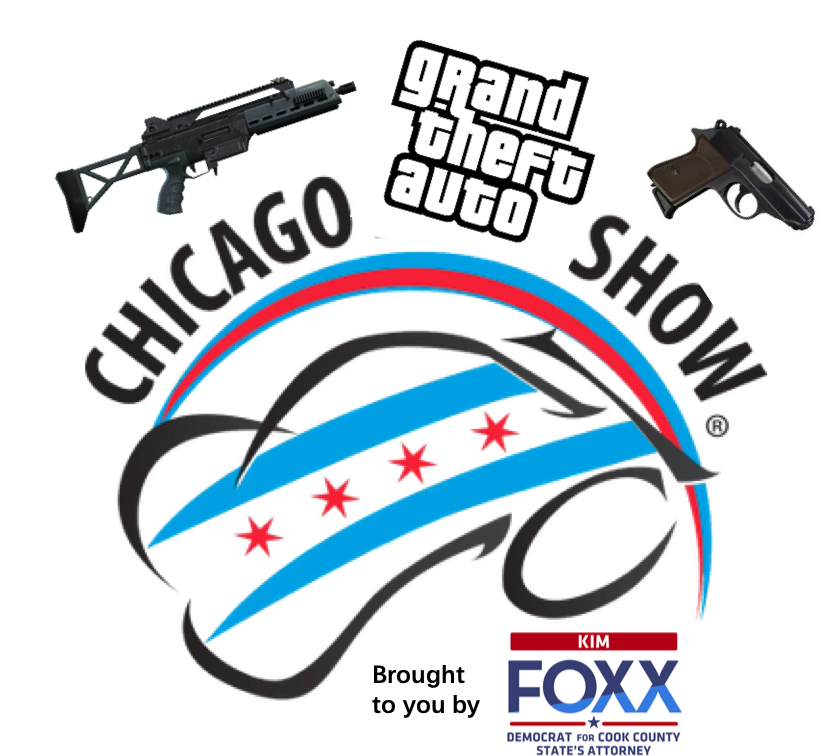 ‍From the desk of Lori:

‍With the full support of the major automotive manufacturers, Kim Foxx and Rock Star Games (maker of the video game, Grand Theft Auto), I am thrilled to announce the 2022 Chicago Grand Theft Auto Show at McCormick Place. LoJack is underwriting the event.

It is not too often a city comes together and realizes it is not just great at something, but truly exceptional. And when it comes to relieving people of their vehicles, Chicago is in a class all by itself. Carjacking has put Chicago back on the map. It’s time we stop apologizing for what makes us great, and fully embrace it.

The numbers speak for themselves: We’re nearly on track for 2,000 carjackings this year within the city limits! With what I estimate conservatively as just over 1.3 million cars registered in the city (there’s 1.6 million in Cook County), that’s one carjacking for every 650 cars. I’m even more impressed with our new social justice and equity policies that have resulted in less than 10 percent of carjackings resulting in felony convictions for offenders in 2020 (keep that statistic between us!)

We’re incredibly excited for the keynote address at the 2022 Grand Theft Auto Show. Our own Kim Foxx will headline with a reading from her new book (soon to be reviewed in the NYT 1619 Review of Books): One City, One Team: North Side + South Side. Kim will share vehicular hijacking best practices from Austin to Englewood. Following her talk, Ibrahim Kendi will join Kim in a panel discussion, moderated by The Party’s own Kamala Harris, on the intersectionality of racism and the benefits of vehicular-based wealth redistribution.

But this will not just be a party for progressive intellectuals and Party Members. We’re going to make sure everyone’s favorite Auto Show exhibits will continue! This will include a modified Jeep obstacle course which will allow attendees to practice evasive driving maneuvers and play laser tag at the same time. And Nissan will also be introducing its brand new 2023 Altima (to provide enterprising young lads something to aspire to once they take their chips off the table).

Attendees will be able to decide between dozens of educational sessions ranging from how-tos to the operationally efficient jacking. Some of the ones I’m most excited about include:

The 2022 Grand Theft Auto Show will offer a safe space to learn how CPD’s new policing policies apply to you:

You can also learn about White Privilege at the event. Robin DiAngelo will be presenting a special session, White Fragility and Vehicular Surrender, in which she will explain “how to respond to being carjacked while remaining an antiracist” and “why carjacking is a reasonable response to white supremacy and male hegemony.” Learn more about these topics shortly on the city’s official Police Vehicular Hijacking Task Force website.

Global press coverage is expected (and, per the usual, I’ll be granting interviews to all members of the press who are black, brown, or gender non-binary). A senior automotive journalist at Motor Trend who was pre-briefed on the event under embargo gave me a quote that Crain’s will lap up that the modified auto show “will be a beacon of good news in an industry plagued by supply constraints, new vehicle availability and unprecedented used car prices.” They/them/their continued on a tire smoking note: “The only chip shortage we expect from the event is a dearth of Flamin' Hot Doritos.”

Finally, Amy and I plan to kick our heels up at a companion concert which we’re holding at Soldier Field where Cardi B will perform her new single: WAP in Someone Else’s Backseat.

‍EVEN THOUGH YOU DO NOT COME TO THE OFFICE ANYMORE, you can use Twitter (@LoriLightfoot) to get a faster response than CPD when your vehicle is redistributed at gunpoint. And be sure to tag @ChicagoContrar1 as well if you like satire Lori Lightfoot style!

* Source: official CPD Facebook page (not a satire, this is real -- we can’t make this stuff up). Quoting CPD:

“The Criminal Trespass To Vehicle Workshop (CTTV) workshop is a video interview series that consists of victims and community volunteers covering topics relating to motor vehicle theft, vehicular hijacking, possession of a stolen motor vehicle, and criminal trespass to vehicle.”

“The session takes place in a classroom setting where referred youth will complete a series of worksheets between each video module that contain instructions and questions related to the following five focal topics: 1) Impact and victims; 2) Risks factors; 3) Future impact (Legal Consequences); 4) Impact on family; 5) Preparing for success (Community Message).”