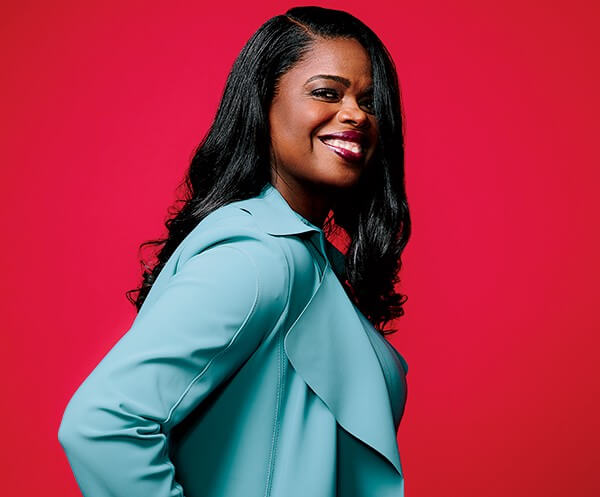 Any chance the City of Chicago claimed ownership of conscientious periodical attentive to current affairs in the Windy City went up in smoke when Chicago published an article paying honor to Cook County State’s Attorney Kim Foxx. A profile published digitally on December 10 and appearing in its January print edition, the piece is authored by contributing writer Carol Felsenthal. A Chicago native and veteran journalist, Felsenthal has contributed to both Time and HuffPost, and is the author of biographies on the lives of Alice Longworth Roosevelt, Washington Post publisher Katherine Graham, and the post-presidential life of Bill Clinton.

Titled “Kim Foxx Wants to Tell You a Story,” Felsenthal digs deep into Foxx’s past and produces a compacted version of Foxx’s personal history. A good spinner of yarns, Felsenthal sets out and interprets Foxx’s life in the fiasco of the Chicago housing projects, her escape from Cabrini Green, describes how Foxx suffered the indignity of living in a homeless shelter, traces her matriculation through Lincoln Park High School and Southern Illinois University, and Foxx’s vertiginous rise to public office.

The outcome of a series of discussions with Foxx, Felsenthal’s careful observations reveal Ms. Foxx is quite tall; her hair has grayed; her fingers are long and Foxx’s fingernails are “flawlessly manicured.” Readers will find Ms. Foxx can deliver a speech without notes; Ms. Foxx often gesticulates with her hands for emphasis; and Foxx’s footwear is “nonsensible.” From rigorously questioning Ms. Foxx, readers also learn from Felsenthal that the county’s top prosecutor, depending on her spirit, enjoys Stevie Wonder, Jay-Z, and, when feeling “saucy,” Beyoncé; Foxx won an eighth-grade election for student council president at LaSalle Language Academy; and Foxx uses her phone to read news. We also discover from Felsenthal’s meticulous questioning Ms. Foxx now has a security detail over concerns for her safety; she loves her two dogs; and the toll of public office on Foxx has been steep: Foxx’s social life has nearly evaporated.

Continuing to uncover the real Kim Foxx, Felsenthal reveals Foxx’s elevation to office has allowed her to cultivate friendships with musicians Common and John Legend; the Cook County State’s Attorney’s office was deeply flawed before Foxx’s arrival; Foxx rejects the notion she is a marionette of Cook County Board President Toni Preckwinkle; and Cook County’s rising political star was instantly recognized by California’s radical-Left senator, Kamala Harris, in a chance meeting at a recent pro-abortion function hosted by Emily’s List. Most important, from Felsenthal’s in-depth examination of Foxx, we learn the impetus behind Foxx’s bid to become Cook County State’s Attorney was the shooting death of an armed teen, Laquan McDonald, in October 2014.

Kim Foxx doesn’t have a story to tell, but Chicago and Felsenthal do.

Cook County’s chief prosecutor and her adoring biographer may have engaged in riveting conversation, but Felsenthal doesn’t tell us much worthwhile or anything we didn’t already know about Ms. Foxx. An article both stale and unoriginal, not to mention points which were absolutely ludicrous, Chicago’s and Carol Felsenthal’s resonant message is: We believe in Kim Foxx’s greatness and so too should you!

Paid news, the basic purposes of Felsenthal’s account of the state’s attorney’s life experiences are to apply sheen over Foxx, rationalize Foxx’s return to office in 2020, lay a foundation for Foxx’s legacy, and provide a boost for Foxx for higher office. Similarly, and as important, Felsenthal is aspiring to portray the Cook County prosecutor as wholly misunderstood, underappreciated, and, in a remarkably peculiar way, through the use of photographic images, present a captivating side of the state’s attorney.

A piece of ill-conceived punditry, Felsenthal’s willingness to polish Foxx’s shoes with her tongue almost entirely avoids contentious issues which could have caused discomfort or prove fatal for Foxx. Agog with Cook County’s newest Progressive darling, Felsenthal disregards Foxx’s office’s hand in the routine of bonding out countless suspected criminals, refusing to apply felony charges against the accused when both obligated and justified, and her office freeing felons in violation of parole or probation. A friendly and unchallenging interview, Felsenthal’s record of her meetings with the prosecutor neither demands Foxx defend her office’s development of a crank brochure concocted to encourage prison inmates to appeal their convictions, nor does Foxx’s newfound media handmaiden ever request an explanation for the State’s Attorney’s office under Foxx regularly overruling appropriate police requests for felony charges against the accused. Worse, with little appetite for hard journalism, Felsenthal is so delicate and solicitous of Foxx she has no interest in insisting Foxx resolve the matter of a hideous double homicide in which the two accused strolled out of prison following another round of vacated convictions. A crime so unspeakable it verged on an atrocity, the incident bore witness to prosecutors in Foxx’s office attesting publicly the accused likely committed the shocking crime, but nonetheless freed the men after testimony from the detective leading the probe was disproved. Whether Felsenthal lacked courage to cross-examine Foxx over the probability two known killers were walking the streets or was so starstruck with Foxx’s eminence is opaque, but Ms. Felsenthal shrewdly avoided burdensome questions for which Foxx has no good answer.

Similarly, Ms. Felsenthal is never inquisitive enough to press Foxx over political donations in the amount of $20,000 from attorney Arthur Loevy, the $270,000 in campaign funds from Illinois Safety & Justice Super PAC, a group connected with George Soros, or Foxx’s reaction to the frenzied support fringe group Black Lives Matter threw behind her campaign for office. A group armed with a harmful agenda and notorious for its hostility with law enforcement, the unruly band of anti-police activists apparently did not substantiate attention from Felsenthal, who rejected the occasion to solicit of Foxx whether Cook County’s prosecutor shares the aims of the grievance-driven group, which, as a matter of course, advances anti-police invective and spreads fear and panic over police intent. Likewise, Felsenthal decides against quizzing Foxx over her geothermal hatred for the Chicago Police Department. A woman with an in-built enmity for police officers, Foxx is neither held to account by Felsenthal for drafting legislation which exposed Chicago police officers to superfluous legal scrutiny following fatal, officer-involved shootings, nor does Felsenthal ever challenge Foxx for refusing felony charges for legitimate threats delivered through social media against the family of police officers near the close of the trial of former police officer Jason Van Dyke.

In one of the infrequent moments Felsenthal does condescend to excavate into the details of Foxx’s official duties or performance in office, as a rule, it revolves around the vacated convictions tied to disgraced ex-police officer Ronald Watts. More interested in muting any outrage over Foxx’s mania with vacating convictions than shedding light on her blundering, the congenial Felsenthal maneuvers with yielding questions to assemble a plinth on which Foxx, the fearless reformer, is to stand and moralize over alleged past injustice. Posing Foxx as a secular saint, Felsenthal creates a deeply ahistorical theater in which Foxx approving freedom for violent offenders is tantamount to issuing the Emancipation Proclamation. A servile gesture performed to safeguard the state’s attorney from expanding on exonerees’ criminal past independent from Watts, Felsenthal, genuflecting to Foxx’s malignant almsgiving, simply writes with a triumphant tone precisely what Foxx wishes the public to digest.

A teller of tall tales, a poor journalist, or contemptuous of opinions which differ from hers, Felsenthal completes her consecration of Foxx by soliciting opinion only from far-Left legal scholars or activists. Writing as if her words in support of Foxx reflect mainstream thinking among Chicago residents, Felsenthal ridiculously favors sustaining judgement from University of Chicago’s Craig Futterman or Loevy & Loevy attorney Joshua Tepfer, both of whom have made a fetish of loudly yelping over alleged police brutality. While dispassion is a strict virtue among skilled and punctilious writers, Felsenthal involves herself in advocacy journalism, which means serving Foxx’s best interests.

Hide the facts and truth to sell fluff and trivia.

A piece of flummery, the real story on Foxx would rest with Cook County’s State’s Attorney compromising with all but the most violent criminals in Chicago.

An absurd media devotional, the timing of this article is no accident: It arrives at Foxx’s two-year mark, a period in which Foxx has appeared in interviews with friendly media outlets WBEZ and WTTW to take in rounds of applause for her holistic reform measures and in which her policies are beginning to be fully understood by the public. In Chicago’s slanted mind, Ms. Foxx is altogether experienced through others’ prejudices and projections, to the extent she has become a caricature of the villainous, antagonist Cruella De Vil. To soothe anxieties and overturn Foxx’s growing image of a vindictive, reckless, and impulsive public official among residents, Chicago rented Felsenthal to perform external housecleaning. A writer specially chosen for the task of redeeming Foxx’s name from becoming a curse, Felsenthal artfully dodged questions pertinent to Foxx’s policies which have done unnecessary harm to the Windy City in favor of unartfully reciting Foxx’s humble beginnings. It’s a feel-good story we’ve heard over and over and over and over and over and over, and while it resembles an uplifting Gilded Age, Horatio Alger rags-to-riches dime novel, its’ oft repeating has become tedious. Moreover, it has no relevance when taking into consideration Ms. Foxx is the highest-ranking prosecutor in Cook County and her bearing in office deserves serious, lucid scrutiny.

But by declining to offer a solemn examination of Foxx’s two-years through diligently questioning Foxx over policy matters, Felsenthal accepted the role of media enabler rather than diligent journalist representing a monthly periodical determined to maintain highbrow journalistic standards. A worker bee dutifully indulging Foxx, instead of difficult questions over policy, Felsenthal wore a velvet glove in front of Foxx, with the objective of writing a brief hagiography and re-branding Foxx as an elected official renowned for her immaculate and polished appearance, not as an imperfect public officeholder. In Chicago’s and Felsenthal’s worldview, Foxx’s election was a mercy for Chicago, its last great hope, and those who disparage Foxx over her office vacating convictions fail a morality test because the monthly and Felsenthal equate Foxx’s tenure with high ethics and modern probity rather than Foxx’s arrogance, object radicalism, and manifold failures. To demand Foxx answer for her actions in office or to publish an essay critical of the state’s attorney would be a grievous violation of the prime directive of Chicago’s media elite: Thou shalt not write unfavorably of “Crimefightin’ Kim” Foxx.

An utterly embarrassing article, one which otherwise would be found in the pages of Cosmopolitan or People, its publication should cripple Chicago’s standing as a reliable barometer to measure Chicago’s political landscape. A monthly which has been in involved in a desperate search for an identity since a staff shakeup in 2016, Chicago appears to have arrived at the intersection of liberal political journalism and entertainment. A perfect example of media bias raised to an art form, this soft lifestyle article demonstrates Chicago now occupies a permanent place in the Foxx cheering section alongside the Chicago Tribune and the Chicago Sun Times.