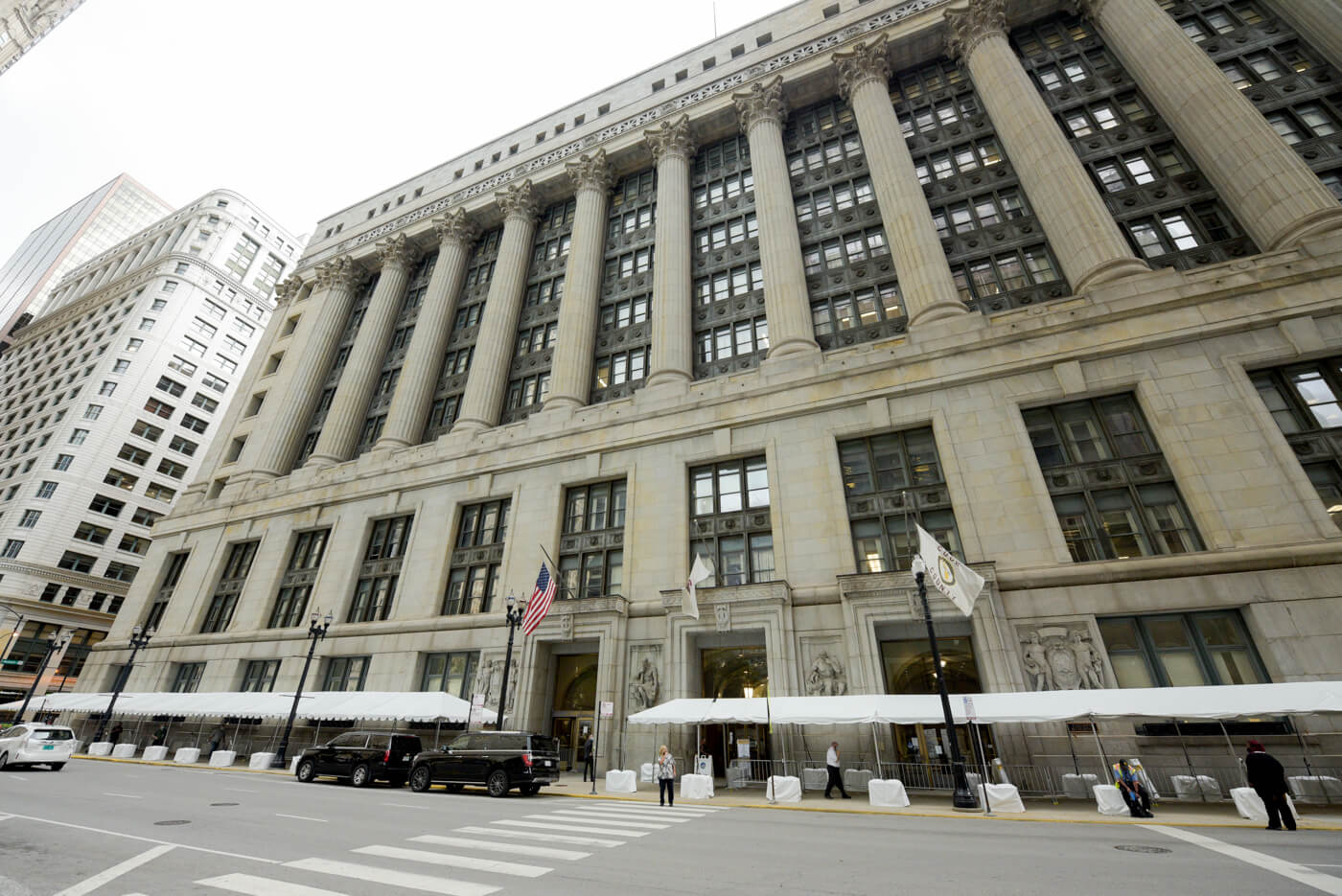 Situated on the shores of Lake Michigan on the northernmost boundary of Chicago, Rogers Park has everything to offer a city dweller.

At the eastern edge of this neighborhood lie beautiful homes, secluded beaches and parks where neighborhood residents can swim, walk their dogs and watch the spectacular sunrises. The tree-lined streets are also filled with vintage apartment and condominiums, ornate in their red-brick architecture, often opening up to magnificent foyers and lobbies.

These condominiums and apartments are affordable, unusual for an American city. Such proximity to a body of water lined with so many sandy beaches would be beyond the reach of working people in any other large American city, but Rogers Park is filled with working class residents.

Served by buses and two train systems, these workers can easily get to their jobs downtown or anywhere in the city. Many ride their bicycles on the backstreets to pick up the lake front trail.

Rogers Park is one of the most diverse neighborhoods in the city, so one can find restaurants serving almost any cuisine within its boundaries. Rogers Park is also home to Loyola University, an institution of higher learning with nationally recognized academic programs and a rising profile in the national rankings for Division I athletics, such as men’s basketball and volleyball.

Rogers Park’s fortunes are exceptional in every way except for one major problem: Crime. Because the gangs embedded themselves in the community decades ago — one ongoing gang war for over a decade — Rogers Park is a community where many potential homebuyers are drawn into the beauty of the neighborhood when led around by a real estate agent. However, these same residents pack up and leave a year later when their car is broken into a second or third time, their home is burgled, they are robbed on a street corner, or a gang murder takes place in front of their building.

Just one Chicago neighborhood suffering under the violent crime overwhelming Chicago, Rogers Park is a neighborhood that always seems to be getting better, but never gets good.

Rogers Park is a victim of the city’s failed political leadership. The previous aldermen who were elected to represent the neighborhood in the City Council never supported the police in an effort to curtail the chronic crime problems. This was one major hurdle preventing Rogers Park from becoming the jewel it could very well be, and once was. Two years into the tenure of the current alderwoman, Maria Hadden, the future of Rogers Park is dire.

One of the loudest voices in the cacophony of progressive alderman championing every measure that would turn cops into criminals and exonerate the gang members roaming free in the city, Hadden has established clearly that her policies and heated rhetoric against the police will only exacerbate the crime epidemic in the city, including her own ward.

How bad is it? According to the media outlet CWB Chicago, there have been six shootings in Rogers Park in the last month. Three teens were arrested for a carjacking on June 3rd. In April, offenders pulled up in a car outside the 24th police district in Haddon’s ward and fired several shots at the station in the middle of the day.

For progressives like Hadden, who otherwise have nothing to offer in experience or ideas, waging war on the police is the current political tactic, the path of least resistance. Here’s how it works: Aldermen like Hadden embrace the narratives of washout newsreaders like CBS 2's Dave Savini. Savini’s relentless attacks on police are based on questionable claims, omission of facts and hyperbolic coverage of missteps by law enforcement to pound useless, vague policies that will further undermine the ability of police to protect the public. This is precisely what Haddon did when she embraced Savini’s pitiful, misleading coverage of a warrant served on the home of Anjanette Young. Police error only, unfortunately Young was unclothed when police mistakenly entered her home to execute a search warrant on a man allegedly armed with a gun. After media learned of the errant search warrant story and broadcast it to the public, Hadden delightedly seized on the incident to push for more limitations placed on the execution of warrants, all but eliminating a law enforcement strategy that is essential to fight crime in her gang-infested ward.

Hadden’s ideology and tactics, shared by numerous elected lawmakers in Chicago, only reveal how officeholders are unable and unwilling to take up the hard work of governing and how their approach is causing a slow suicide for neighborhoods such as Rogers Park. It’s a political strategy that works for a while until the chronic anti-police bluster can no longer serve as a useful distraction from the incompetence and indolence of political leaders like Hadden embracing it. As the body count climbs higher, a new kind of “wokeness” arrives.

The question is whether the new wokeness may arrive too late to save Rogers Park.

There are gloomy signs this awakening may arrive too late. Over the last several months, as the rhetoric and policies that handcuff the police extolled by the likes of Hadden and her progressive allies, police officers in Rogers Park’s 24th District have begun retiring at an alarming rate. These abrupt retirements account for a loss of what approaches some 100 years of experience among officers who have served the Rogers Park community for most of their careers. These same officers have watched two generations of gang members grow up. These are police officers who have gotten countless guns off the street and removed untold murderers from the neighborhood. Officers serving in this community know every nook and cranny of the district, its business owners, its hideouts, and its high rises. Like many Chicago police, they leave the district shaking their heads at what is happening under the rule of aldermen like Hadden.

The loss of such experienced veterans is immeasurable. Their knowledge and experience would be vital to the next generation of young officers seeking to replace veteran police. Certainly, they would be crucial in restoring law and order in a neighborhood where so many people have purchased their first home. Lost on Hadden and her progressive cronies is the fact that the officers comprising the 24th police district in Haddon’s ward are, as with the police department as a whole, one of the most diverse institutions in the city. Officers working in the 24th District come from all over the world and speak many of the languages in a community that changes its identity block by block. They are members of almost every community, including LGBTQ.

There is another, more ominous sign that Hadden will prove a catastrophe for Rogers Park. It is Hadden’s choice for chief of staff, Leslie Perkins. Prior to working with Hadden, Perkins served as an aide to former 45th Ward alderman, John Arena. Perhaps no political figure in Chicago is held in lower esteem, indeed, outright contempt, by first responders than Arena. The reason is that police officers who reside on Chicago’s Northwest side learned in 2018 that Arena had filed 31 complaints against police officers who opposed Arena’s proposal for a mixed-income housing project at 5150 N. Northwest Highway. The complaint? Racism. To the officers who had lived in the Jefferson Park neighborhood for decades, Arena’s tactic of filing complaints with the city’s Inspector General appeared little more than an attempt to not only silence opposition but punish it.

Ms. Perkins’ role in the former alderman’s ploy was believed to be extensive. While working for Arena, Perkins is alleged to have accumulated information on residents, some of whom were police officers and firefighters, and maintained an intricate database of information she established by tirelessly combing the Internet. Much of what Perkins gleaned came from spending endless hours online, rummaging through residents’ social media accounts. One Freedom of Information Act (FOIA) request returned the fact Perkins searched back almost an entire decade on one of the falsely accused officers. It is believed Perkins searched the social media accounts of close to 100 residents, all while on city time and earning a paycheck from the City of Chicago.

A key player in a sleazy attempt to smear Northwest Side residents as racists, Perkins’ role in the whole affair resembled a cog in a devious, deep-state machine found in a Marxist purgatory such as Cuba. Almost immediately, the claim of racism against the police officers residing in Arena’s ward began to fall apart when aides working in the former alderman's office contacted the Anti-Defamation League (ADL). The ADL wasn’t buying Arena’s argument: FOIAs exposed e-mails between Ms. Perkins and the ADL showed the liberties group questioning the validity and severity of the residents’ social media posts. Ultimately, 29 of 31 complaints made by Arena against the officers were found to be utterly without foundation by the city’s police oversight agency, the Civilian Office of Police Accountability (COPA). For COPA to reject the allegations, the charges must have been pretty pathetic, as COPA has a long record of embracing and running with even the weakest allegations against police.

Apart from the ADL raising doubts over Arena’s absurd allegations, another factor which nullifies the legitimacy of COPA’s investigation is the oversight agency to this day refuses to tender to the accused official, written verification Arena’s charges have been determined to be unfounded.

After Arena was unseated by Jim Gardiner in 2019, Perkins shifted over to Maria Hadden's office and now serves as the 49th Ward alderman’s chief of staff.  Almost immediately upon starting her job with Haddon, Perkins courted controversy with a tweet attacking Gardiner, the man who unseated her former boss. Jumping into a Twitter spat between Gardiner, a former firefighter, and Mayor Lightfoot, Perkins responded to a jab Lightfoot threw at Gardiner after the 45th Ward alderman explicitly disapproved of Arena’s hire by Chicago’s Department of Planning and Development (DPD) with: “I wonder how a firefighter feels about getting burned so badly.” A comment so revolting it drew the disgust of Reverend Thomas A. Mulcrone, Chaplain Emeritus of the Chicago Fire Department, Mulcrone penned a letter to Haddon condemning Perkins’ hostility. Hadden, however, failed to see the wickedness of Perkin’s remark, dismissed it and characterized it as a “joke.”

Is this what Hadden is bringing to Rogers Park? What does it say about the kind of leader Hadden will be, what kind of leadership she will provide for public safety, by hiring Perkins as her chief of staff, someone with such an obvious antipathy for police and firefighters and such a record of suspicious tactics against political opponents?

Hadden's language and politics are all music to the ears for the various factions of Gangster Disciples, Latin Kings, and other gangs robbing, shooting, and terrorizing the 49th Ward. Gang members know the veteran cops who gave so much to Rogers Park are leaving in disgust. The same gangs know they have Cook County State’s Attorney Kim Foxx working for them and now a bevy of useless, grandstanding aldermen like Hadden are backing them as well.