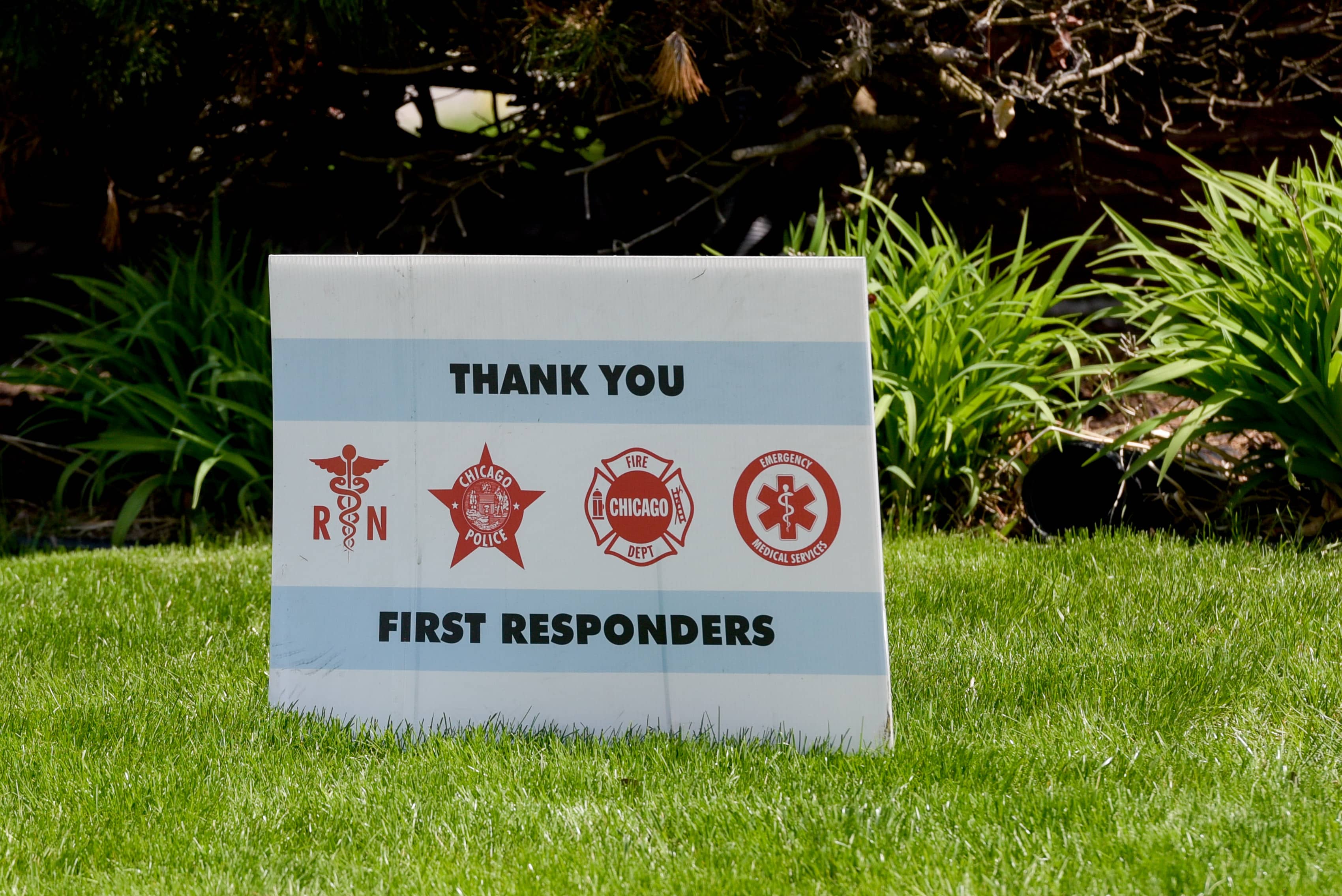 The South Side neighborhoods of Beverly and Mount Greenwood are only a blip on the radar screen, but residents in these two communities prefer to keep it this way. Two quarters of Chicago located a half-hour drive — some ten miles — from the Loop, within the boundaries of Beverly and Mount Greenwood reside almost 40,000 inhabitants. Neighborhoods in which the Church, family, the White Sox, and Notre Dame football are the center of their lives, the charm of these two neighborhoods are its tree-lined streets, lush green lawns stretching far into the distance, a suburban feel in an urban setting, and residents who are familiar with and mind one another.

A little corner of paradise where its citizens enjoy life and raise families, residents in Beverly and Mount Greenwood were recently dealt a hammer blow when a neighbor and friend, Danny Golden, suffered a dreadful injury on July 9. A day seared into the memories of residents, though a natural reaction of homeowners in these two cheerful areas to such a harrowing event would ordinarily be flight to the suburbs, not one for sale sign appeared on lawns. Remarkably, instead of waving a white flag, family, friends, and neighbors mobilized to raise $1.4 million for the injured Golden. A powerful sense of neighborhood comity has never been more evident.

Daniel Golden was born on July 11, 1990, to Pat and Colleen Golden. Parents who believed the highest of distinctions was service to others, Pat’s devotion to duty took him on a 25-year career with the Chicago Police Department (CPD). That a police life was the elder Golden’s calling was indisputable. It was in his DNA. It is the Golden family business. A natural healer, and a woman of unflinching forbearance, kindness, and humility, Colleen Golden is a nurse practitioner and is still employed at the University of Chicago.

The Goldens raised their seven children in Mount Greenwood. Parenting with foremost moral standards, the Goldens reared their children by inculcating the importance of personal responsibility, family, and faith. Pat and Colleen also taught their children empathy was the most important feature of compassion. To Pat and Colleen Golden, parenting’s best gift was not material goods, the frivolous, superficial or the ephemeral, but a home in which ordinary life was thrilling, radiant, and enchanting. A household filled with parental affection, Pat and Colleen impressed upon their children a right ordering of lives leads to greater fulfillment and to genuine human flourishing.

Masters in the art of parenting, the Golden’s children found comfort and direction in Pat and Colleen’s powerful message of decency. It was a message which helped set a moral tone for their children’s lives. It resonated particularly with son Dan.

Dan attended Queen of Martyrs in Evergreen Park, where he served as an altar boy, and then Saint Rita High School. As a student at Saint Rita, Dan never ran afoul of the rules and though he was not without intellectual flair, he never trespassed over boundaries which would place him in academic jeopardy. Put differently, Danny simply tolerated school. Preferring athletics, after suffering a broken leg as a freshman with the Mustang football program, Danny abandoned football to concentrate on wrestling. Though Chicago Catholic League honors eluded him, Dan did qualify for the Illinois High School Association state tournament as a senior in the 171 weight class.

Dan entered Saint Rita a boy. After four years under the patient and devoted guidance of the Augustinians, Dan grew as a Catholic, learned to cherish the virtues of truth, unity and love, and graduated a Rita Man.

Enrolling at Western Michigan in the fall of 2009, Dan remained in college for one year before the urge to serve was too great to resist. Emulating his twin brothers, both of whom entered military service, Dan was inducted into the United States Army in 2010. Assigned to Fort Benning for basic training, upon completion of his infantry instruction, Danny was attached to the 1st Brigade, 25th Infantry Division and stationed at Fort Wainwright, Alaska, for his length of service. While off duty, Dan reveled in Alaska’s dense forests, rugged mountains, and wildlife.

Although Danny was considered a prime candidate for Special Forces, he declined over an additional six-year commitment. Dan sought a return home to family, to complete college, and master another talent: Policing. Honorably discharged after four years, Dan enrolled at Calumet College of St. Joseph and earned a degree Criminal Justice. An ideal field of study for a career with the Chicago Police Department, though Dan tested for both the CPD and Chicago Fire Department (CFD). Dan preferred a life of fighting crime and he passed on a career with CFD.

After graduating from the Police Academy, Dan was assigned to the 4th District. A strip of Chicago known as a free-fire zone and notorious for astonishing violence among competing gangs, Dan Golden committed himself to ridding the neighborhood of the depravity spread by criminal gangs. Though danger regularly lurked, Dan established an unblemished reputation for vigilance and being a repository of knowledge on gang members in the district. In his seven years with CPD, Dan was a member of the Community Safety Team and served with the Area 4 homicide team, which assisted in the removal of killers from the streets. Dan earned numerous honorable mentions for his proactive policing and led the district in gun seizures for several years.

Though his service to Chicago only reached seven years, Danny Golden never advertised the nature of his work, nor did he seek recognition for his actions. To Danny, a life-long commitment and obligation to Chicago residents, both on and off duty, was his ethos.

It was this ethos which led Dan to intervene to end a scuffle on a Beverly street on July 9.

While it is unnecessary to rehash the sequence of events which led to the injury inflicted on Officer Golden, it is fitting to allow a Beverly resident to speak directly over the suffering of the afflicted, grief of family and friends, and the mass unity which followed Danny's wounding. What followed Danny Golden's injury — an outpouring of support both emotional and financial — has defined two Chicago neighborhoods.

In a straightforward message, one resident familiar with Danny and the Golden family wrote:

“If you are from the Southside, the real Southside, be proud because there are not many places like it.

Because of general lawlessness in the city, Chicago has earned a miserable reputation for being unsafe for residents and visitors. Chicago has also been referred to as Chiraq for amassing more homicides than the death toll than the war in Iraq. With this in mind, it’s not hard to fall into a trap of thinking Chicago is has slid so far off track that there is no hope for it to rebound and become a livable city again.

Watching television and reading news reports about the crime and carnage in Chicago can be a grind. It can also make someone second guess whether it is worth the risk to remain in Chicago and raise a family.

Despite a mood of pessimism, residents in the Beverly and Mount Greenwood neighborhoods won’t surrender nor will we allow the tearing down of what is good.

The Papa Hops Softball Tournament is a night reserved for that good. It’s an evening that residents of Beverly and Mount Greenwood have set aside to raise money for the Tom Hopkins Foundation. For several years, the Hopkins Foundation has hosted a 16” softball tournament. The money raised through sponsorships goes to assist cancer patients. It’s a neighborhood function that serves others.

Unfortunately, on July 9, tragedy struck the neighborhood in a way few could have foreseen. After the charity softball game ended, the celebration moved over to Sean’s Rhino Bar. It was a night we should have been enjoyable and filled with fun. But when a fight broke out in Rhino on July 9, we found out first-hand that our neighborhood is closer to the problems with crime and violence that other Southside neighborhoods face. After the fight ended, a man returned with a gun and shot Danny Golden, an army veteran and Chicago police officer, in the back. Danny is now paralyzed.

What happened next was incredible: The neighborhoods joined together and stood behind Danny Golden after Danny was injured, a Gofundme to assist him raised nearly $1.4 million since its creation, $800,000 of which was raised in the first 24-hoursafter it was established. Danny’s condition has also attracted professional athletes Kyle Schwarber and Tom Brady, mixed martial artist Tim Kennedy, and former Navy SEAL Rob O’Neill.

But where Danny has gotten the very best and most meaningful attention is from family and neighbors in Mount Greenwood and Beverly. Other than the thousands of visitors that Danny has had, children in the neighborhood started a lemonade stand near Mount Greenwood Park. Those kids raised $12,000 for Danny. As word spread, businesses joined the effort. None of these gestures have been small. The Tom Hopkins Foundation and Baracco’s Pizza united and made t-shirts to help raise money for Danny. Many Catholic League football teams have also agreed to wear helmet stickers honoring Danny for the duration of the football season.

The overwhelming and constant stream of support for one of our own is a symbol of what makes Mount Greenwood and Beverly communities so special. There are not many communities in this city, let alone around this country, that would have done what we have done in the face of such tragedy, but I’m not surprised because this neighborhood has faced down challenges, recovered and always moves forward. These two neighborhoods are a beacon of hope in a city of hopelessness.”

Healing is a matter of time. Though Dan Golden suffered a crushing injury, he was not driven to despair. While his agony could have caused mourning and desolation to dominate his home, peace and love prevailed.

Danny Golden may never rise to his feet again. Yet, Golden’s policing career, which had often featured success, is unlikely to be over. Though his career working the streets has come to an end, it will not crush his spirit. A man known for accepting formidable challenges, Golden will find the strength to cope and the physical, mental, and moral character to withstand some limitations.

The response to Danny Golden’s misfortune is a glistening example of two neighborhoods rising above differences to unite for a good in both thought and deed. Mass unity, the gush of sympathy and compassion for Golden elegantly illustrates a profound moral tradition exists in Beverly and Mount Greenwood and it is incorporated in residents’ daily lives.

Beverly and Mount Greenwood spoke. When the two neighborhoods expressed themselves on behalf of Danny Golden, residents declared with courage and a resolve to confront tragedy in a way characterized by grace and genuine human sympathy. And this is miraculous.