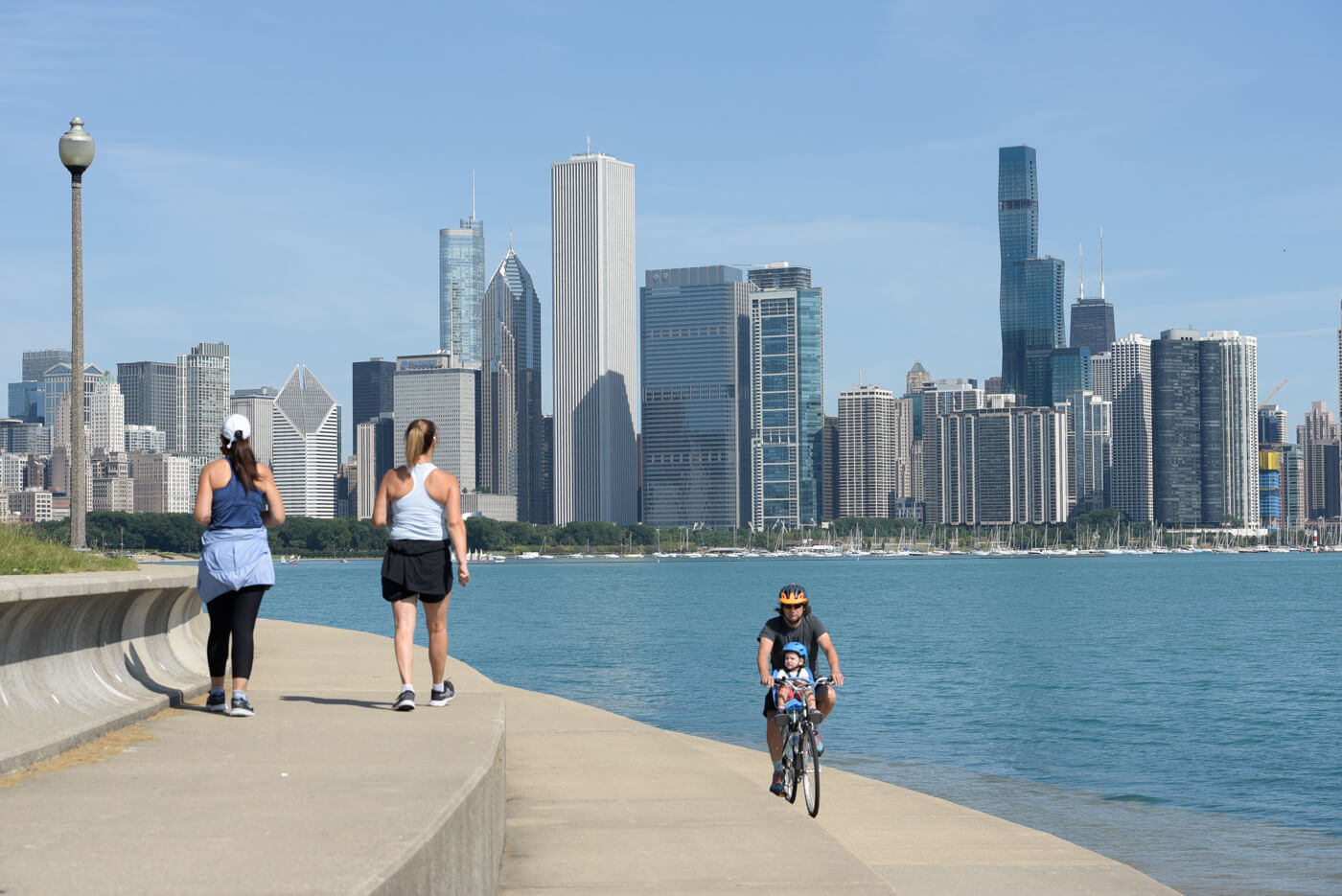 In a May 28th press conference to announce the City of Chicago’s summer violence reduction strategy, Mayor Lori Lightfoot and Chicago Police Superintendent David Brown touted an “all-hands-on-deck” approach to fighting crime which involved city agencies and outreach workers partnering with the Chicago Police Department (CPD) to bring peace to the city. If this sounds familiar, it's because the proposed idea is virtually identical to a plan announced on May 22, 2020, prior to Chicago suffering the worst summer violence in over twenty years. Even fielding a softball question about whether more officers would be deployed to high-violence beats, Brown struggled to find a coherent answer and settled for such meaningless tripe as:

Things got worse as a simple question was posed about the plan to transition CPD’s emergency communication radio operations to an encrypted system to combat interference from what officers refer to as “rogue radios.” For as little as $100, anyone can purchase a programable radio transmitter with the capability to interfere with CPD radio transmissions, creating dangerous situations for officers. Had Brown demonstrated any semblance of leadership and been present during last summer’s civil unrest, he would have heard officers and dispatchers struggling to broadcast emergency messages while rogue radios blasted vulgar music, taunted officers, and announced hoax emergency calls. Brown started with a sad but truthful statement “I don’t know what that means,” then continued to display his ignorance of his own department by saying “our radio systems are encrypted.”

Shortly thereafter, a reporter asked about the record murder numbers in 2020 and Brown took offense, claiming 2016 (prior to his tenure) was more violent. When the reporter clarified he was discussing summer violence in 2020 (the subject of the press conference), Brown criticized him for cherry-picking data and said: “There’s statistics and damn statistics.”

Days later, when a post-Memorial Day press conference was held, Brown celebrated the relatively average shooting numbers over the holiday weekend. In a televised event that felt more like a celebratory awards show, the superintendent was asked what contributed most to the “successful” crime strategy which saw four homicides and more than 30 shootings. Ignoring the mild weather, including a rainy 40-degree Friday night and the fact that every police officer was ordered to work their day off and extend their tour to twelve hours, Brown cited “street outreach” and civilian “violence interrupters.” Good to know.

Several days after at a Monday, June 7th, press conference, while facing questions after a warmer, more violent weekend saw police districts struggling to answer calls, Brown first claimed that having officers across the city imploring for manpower was a “normal Saturday night anywhere in the country.” Addressing a follow-up question Brown then shifted, contradicted himself and placed blame on COVID-19 for a lack of CPD recruits to fill the ranks. When asked if new recruits were going to replace the recently disbanded downtown deployments, Brown either pretended not to know his own Department’s reduction in downtown stationary posts or did not know the reduction was made. Brown then told the reporter: “That’s not accurate, I would check my source.” Perhaps the reporter’s source was one of the thousands of officers who received the memo that daily district deployments to downtown fixed posts would end. A weekend which witnessed five murdered and 58 shot, Brown, as expected, declined to point fingers at the presumably failing street outreach and violence interrupter workers. Damn statistics.

For all the focus on Superintendent Brown’s appearances in front of Chicago media, one may be tempted to ask what role First Deputy Superintendent Eric Carter plays in Chicago’s failing crime strategy. As the highest ranking CPD veteran, David Brown relies on Carter to provide him accurate counsel on internal operations. To look at Carter’s chest full of medals, one might be persuaded to forgive Brown for assuming Carter knows what he’s doing. A notorious micromanager who famously rearranged the assigned parking spaces at CPD Headquarters to favor his friends (a job previously handled by Facilities), Carter’s personnel details and assignments have led to over a thousand officers who should be performing vital functions sent to ineffective and incredibly inefficient city-wide teams. These teams tie up radio traffic asking dispatchers to create paperwork for meaningless “positive community interactions,” and are alleged by at least one supervisor in a lawsuit to maintain illegal quotas for police actions. Any serious CPD official willing to provide an honest assessment will share the most effective way to have an immediate impact on CPD operations is to disband or vastly reduce these bloated specialized units.

How could Carter be so wrong?  Look at all those medals!

A recent Freedom of Information Act request shines some light on Carter’s all-show, no-substance management style which has dragged David Brown to the ranks of the most ineffective CPD Superintendents. Never seen without his eight rows of CPD ribbons, it turns out Carter’s awards don’t match his official complimentary history. For example: The “Deployment Operations Award” ribbon First Deputy Carter displays indicates he received a total of five of these now-defunct awards. It turns out Mr. Carter has only earned one of these awards. Scratch one ribbon. A high-ranking supervisor when the “Top Gun Arrest” award was created under the tenure of Jodi Weis, Carter actually has one on his record. According to CPD rules, Carter somehow managed to make the most on-view gun arrests for an entire police period. This is very unlikely to have occurred for a police official serving in the upper echelon of the Department.

Another award created under Weis, the “Traffic Stop of the Month” is bestowed upon an officer who pulls over a car, writes a traffic citation and charges an additional noteworthy crime. Neither of these awards would be appropriate for a high-ranking supervisor (as the idea is to encourage hard work by beat officers) and it would be very unusual for such a supervisor to even write a traffic citation themselves. This should help explain why no “Traffic Stop of the Month Award” shows up on Carter’s record, but the First Deputy doesn’t explain why he wears the ribbon.

The William Powers Leadership Award does show up on Carter’s record, but in light of his actions as First Deputy Superintendent and apparent problems with honesty in his complimentary history, one should inquire over whether Carter actually earned it. Would the misallocation of resources under his command show “operational excellence?” Would consistently canceling days off in an arbitrary manner, then retracting the cancelation after thousands of officers have already made arrangements for childcare count toward “promoting personnel development?” Is Carter’s willingness to arrange the transfer of his wife to a cushy spot at the airport, then orchestrate her promotion to captain “encouraging and instilling high expectations in personnel under their command?” Those criteria are required of an awardee, and it’s clear Mr. Carter is an undeserving recipient of prestigious awards. The stars adorning his green “life-saving award” and yellow “police officer of the month award” indicate Carter received two of each award in his career. According to official CPD records, the First Deputy only earned one.

The fact Carter continues to falsify his career record by parading around with unearned medals on his uniform suggest a great deal about the First Deputy. First, it indicates Mr. Carter is a man of great personal vanity. Second, it implies Carter is professionally gratified by titles and decorations for the purpose of conferring upon himself prestige and respectability. While the First Deputy may consider wearing unearned awards a harmless inflation of his record, this is a terrible insult to officers who have performed acts of valor and are truly deserving of the honors. For Carter to display awards he has not earned only renders such decorations meaningless. By doing so, Carter is being honored for disgraceful behavior.

Some advice to Superintendent Brown: You are failing. You fail partly because you are receiving terrible advice from your second in command. Ms. Lightfoot has indicated she’s sticking with her poor decision in hiring you. If Mayor Lightfoot insists on refusing to admit error by retaining you as the superintendent, the fastest way you can start turning around the mess that Chicago has become under your “leadership” is to move on from “Medals” Carter.