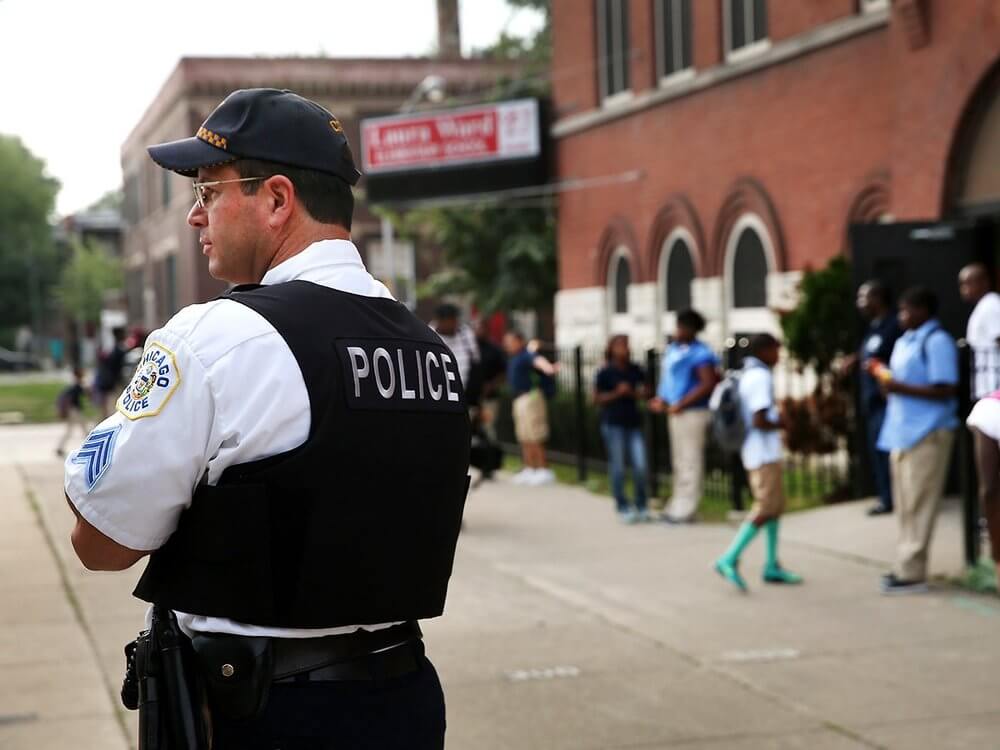 What should sound alarms and force a resignation is just another ordinary day in the organized chaos of the CPS.

Just after dawn broke on September 5, students enrolled in Chicago Public Schools (CPS) returned for the 2017–2018 academic year. The annual ritual falling on an unusually crisp Tuesday morning, students’ jitters largely revolved around shifting from the freedoms of summer to the regular sound of a bell, a strict daily class regimen, becoming acquainted with new teachers and classmates, and homework consuming part of their valued free time. For a sizable portion of students what lie ahead is relatively standard, but for Chicago’s 8th and 10th grade students, this fall will include a poisonous new mandate.

Slated to go into effect for the fall semester, the CPS mandate in question, “Reparations Won: A Case Study in Police Torture, Racism and the Movement for Justice in Chicago,” is a three-week course devoted to examining torture allegations leveled against former police commander Jon Burge. Achieved over the objections of members of the force and the Fraternal Order of Police (FOP), the mayor’s office and the CPS have offered assurances the coursework will not be misemployed to tarnish the image of Chicago police officers.

Despite the public commitments from city officials regarding the limited scope of the curriculum, citizens of Chicago were recently given fair warning of precisely how some CPS educators intend to skillfully re-tool the Burge curriculum into rhetorical cudgel to bludgeon the Chicago Police Department. Fleshed out in an essay submitted to the Huffington Post on September 4 by CPS educator David Stieber, this jaundiced article signals the intent to depict members of the Chicago Police Department as licensed bandits, sadistic thugs or outright homicidal maniacs.

Stieber’s aggrieved commentary is merely a mirror image of how he and his colleagues in the CPS intend to deliver a powerful statement inveighing against the Chicago Police Department.

An essay deeply imbued with acrimony, contradictions and wildly overblown historical comparisons, Stieber opens his disgruntled opinion piece by braying allegations against Burge, but omits the fact Burge’s first two trials resulted in a hung jury and an acquittal. Stieber also neglects to admit Burge was convicted in a third trial of perjury and obstruction, not torture. Airily dismissing further facts, Stieber fails to mention some charges brought against Burge and his fellow officers were later determined to be pure fabrication.

Quickly climbing to a stratospheric height of absurdity, Stieber then introduces the Shoah and the institution slavery in the insane attempt to draw a parallel between the deaths of over 12 million Europeans and the sin of black enslavement to allegations against Jon Burge. An utterly risible contention, Mr. Stieber only succeeds in revealing him wholly unfamiliar with historical context and demonstrates his highly-developed sense of drama. An altogether irrational comparison, no single allegation against Burge or fellow officers even closely resembles the horrors of Nazism or the blemish of slavery. Devised as an infallible response to end conversation with whom he disagrees, by introducing Hitler, the Holocaust, and slavery into a conversation involving allegations of police torture, Mr. Stieber only trivializes catastrophic historical events. As a Social Studies classroom instructor, Mr. Stieber, of all people, should know the only honest and valid analogy drawn to the Nazi dictator and his unequaled crimes are instances of mass murder, not allegations of torture. Stieber’s establishment of the Holocaust or slavery into discussion over Jon Burge is an implicit signal he intends to misuse this new curriculum to a harmful end and harness the Hitler equivalence pointedly to shut down conversation related to legitimate counterarguments over the Burge allegations.

Continuing to enjoy his anti-police boomlet with breathless giddiness, Stieber stumbles on with a series of assertions, all of which are outwardly deceptive or ridiculous. In a jaw-dropping reversal from an early declaration proudly announcing Social Studies instructors “love teaching multiple viewpoints,” Stieber taunts the FOP as bereft of a “valid viewpoint” over the Burge curriculum. Essentially admitting he intends to take every precaution required to mute any frame of reference in conflict with his own, Stieber more or less so concedes he will portray Chicago police as bogeymen terrorizing Chicago neighborhoods in his classroom. A spear carrier in the crusade against police, Stieber’s hypocritical position denying the legitimacy of the FOP’s stance opposing the Burge curriculum is potent: It is evidence he will select “a la carte” from the most damaging allegations against police, authentic or not, and advance them as consummate truths during classroom instruction in his campaign to brainwash his students. In Stieber’s insular world, contrasting opinions are unwelcome and neither to be engaged with nor disputed. According to Stieber, those who contest his perspective are to be dismissed with cruel swipes, blatantly inaccurate labels, and are morally inferior, intellectually dishonest, and crooked.

In a second jab at the FOP, Stieber mocks the union’s efforts to attain impartial treatment for the Burge classwork, and with overpowering snark derides the FOP’s “loss in court” over its protestations against the introduction of the one-sided curriculum. Continuing to sling arrows, Stieber proceeds to indict the Chicago FOP as an active co-conspirator in a scheme to provide refuge to negligent officers or pressure police officers into silence through contract negotiations. Naturally, Stieber offers virtually no evidence to back the charge.

Relentlessly spilling wrathful digital ink, Mr. Stieber then submits a string of deaths attributed to police action, but deliberately omits critical facts related to each case. Preferring to speculate on matters he is not competent to judge, in the case of Rekia Boyd, Stieber conceals the fact former officer Dante Servin was indicted, faced trial, was acquitted, and is no longer with the force. Moreover, Stieber hides the fact the officer involved with the death of Jose Nieves, Lowell Houser, was charged with murder; Sergeant John Poulus is facing dismissal from the force for his involvement in the death of Kajaun Raye; and Jason Van Dyke is currently facing murder charges. In each case, Stieber is perfectly content with misleading readers police officers acted carelessly or with malice by withholding crucial information, particularly the fact each police officer faced an internal inquiry and justice over their actions.

Steadily seething anger with police, Stieber mentions several separate cases in which individuals died at the hands of police officers, but obscures all-important truths which justified police action. Demonstrating a striking level of ignorance of police procedure, Stieber casts a shadow of cover over the fact Joshua Beal was captured on video brandishing a firearm and had refused to heed repeated orders to drop his weapon from officers at the scene. Similarly, Stieber refuses to mention Paul O’Neal was recklessly driving a stolen vehicle, endangered the lives of innocents, used the stolen vehicle as a weapon, nearly running over one police officer and striking two police vehicles, and refused police commands to surrender before being fatally shot while attempting to elude police. In the same dishonest fashion, Stieber draws a veil over the fact Pierre Loury died after pointing a weapon at police, Loury’s weapon was recovered at the scene, and Loury was affiliated with a violent street gang. Regarding the deaths of Quintonio LeGrier and Bettie Jones, Stieber shrouds in secrecy the fact LeGrier had threatened officers with a baseball bat and Jones’ death was ruled accidental. Despite all Stieber’s pious sermonizing over the need to demonstrate compassion for alleged victims of “police violence,” Stieber shows no such empathy for police officers forced into making life-and-death decisions or sensitivity for a police officer whose use of a firearm in self-defense inadvertently claimed the life of an innocent.

Of all Stieber’s outrageous and duplicitous commentary, what qualifies as both shocking and disgraceful is a passage in which he professes fear for his physical safety for authoring a series of anti-police essays.

“Anytime I write a piece critical of police I ask myself a lot of questions. Is there a risk to me in writing this piece? My spouse? My kids? Do I need to try and make sure there aren’t recent public pictures of my kids on social media? Do I need to prevent people from knowing where my kids go to school? Am I damaging my career? Am I in danger? Or are these just irrational fears that I don’t need to worry about? I think these thoughts every time my partner gives me the look that means, “Dave be careful.” I try to be, but then I think about teaching.”

Patently idiotic statements in all respects, Mr. Stieber’s contention his published work casting Chicago police in an unfavorable light places his or loved ones’ personal safety at risk from retaliation from members of the Chicago Police Department is an absolute scandal and should call into question his fitness to serve the City of Chicago. Moreover, Stieber’s remarks in his Huffington Post piece should merit careful exploration of his classroom conduct from his superiors in the Chicago Public School system. No such scrutiny is forthcoming, however. In contrast, despite Stieber’s uproarious expression of fear for his career in the CPS over his paranoid anti-police missives, he will likely see his stock rise among those at the top of the CPS leadership pyramid.

Instead of denouncing Chicago police among the circus of anti-police crusaders on Chicago’s streets, Mr. Stieber intends on being a one-man mob in the privacy of his classroom.

For all his appalling charges hurled at police and repeated assurances the Burge curriculum does not aim to befoul the image of Chicago’s law enforcement community, in what amounts to self-incrimination in front of a rolling national audience, Stieber professes he will take unlimited liberty with this curriculum to do as he pleases in his classroom.

“I realize that I must use my various forms of privilege to speak out,” Stieber wrote on Huffington Post.

A damning acknowledgment revealing him an agent provocateur impersonating a dispassionate professional educator and part-time author, Stieber’s admission completely disassembles the ramparts of objectivity he sought to erect around his classroom to mask his enthusiasm to outflank the Chicago Police Department in a school setting. A powerful message delivered by a shady courier, Stieber’s excited utterance is testimony he and his fellow educators will aim a medley of instructional tools at police with full fury to further deepen and entrench anti-police attitudes among the CPS student population. In Stieber’s disfigured worldview, the administrative and justice systems in Chicago are calamitous failures on all levels and the onus to achieve “social justice” falls on CPS educators to prevent further deprivations, misery and injustice.

Unapologetic about his deception and desire to politicize his classroom, Stieber’s methods to bring discredit to all Chicago police officers if only by association completely razes his professional pose as an impartial educator. Unfortunately, to the detriment of the citizens of Chicago, its pupils and the police department, this new curriculum will be carried out by Stieber without providing a single word of absolution for over 12,000 Chicago police officers who serve the city with distinction.

Given his baneful sentiments expressed about the Chicago Police Department furnished to the Huffington Post, imagine how Mr. Stieber plans on conducting himself in his classroom when he addresses allegations against Jon Burge. Instead of retailing propaganda about the Chicago Police Department, perhaps Mr. Stieber should utter a word or two in daily lesson plans about the obligation Chicago’s citizens have to obey lawful commands from police. Coming from a mind as frenzied as Stieber’s, this would be Greek wisdom.