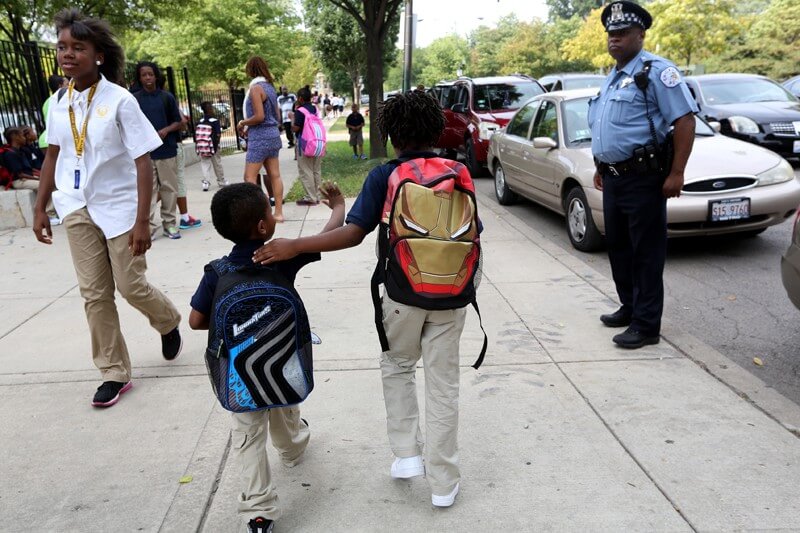 Plato once averred: “The direction in which education starts a man will determine his future life.” A man of remarkable intellectual gifts and broad range of vision, it is almost inconceivable a student of Socrates, the tutor of Aristotle, author of The Republic, and founder of the Platonic Academy could have ever envisioned the toxic culture found inside the walls of the Chicago Public Schools (CPS).

At issue is the creation of coursework destined for the CPS titled “Reparations Won: A Case Study in Police Torture, Racism, and the Movement for Justice in Chicago,” the enactment of which is certain to indoctrinate students with anti-police invective. Cobbled together by the warped minds inside the CPS’ Social Science and Civic Engagement Division and supported by Mayor Emanuel and the Chicago City Council, the planned unit is part of an extensive reparations package negotiated by the city in 2015 following allegations brought against former Chicago police commander Jon Burge. According to claims, Burge led a group of police officers who allegedly tortured and coerced confessions from suspects between 1972 and 1991.

Included in the three-pronged reparations bill is the establishment of a commission tasked with directing $5.5 million for alleged victims, a support network embracing health care, counseling services, and vocational training for alleged victims, and the development of a course of study devoted to the Burge case for instruction in Chicago public schools. While the cash payments were delivered and apologies granted, the fulfillment of a pledge to introduce Mr. Burge into CPS classrooms has not been realized. Although the curriculum has yet to meet final approval, it is beyond question it will pass. Those who dare to speak in opposition are likely to be branded insensitive, intolerant, or worse. Scheduled to be put into practice next year, it is doubtful the CPS leadership solicited input from the Chicago Police Department.

We’ve seen this movie before and we know how it ends: Once this new module is brought to bear, it will spare no word of condemnation of the Chicago Police Department.

With all of Chicago obsessing with an effort to craft and implement police reform, this CPS policy faced few legislative hurdles and its aim is very clear: It is a deliberate campaign of misinformation tailored to dismantle police authority. An immaculate example of the Left’s infiltration of public schools, this course’s unique ambition is to sear into the conscience of Chicago’s pupils the Chicago Police Department is a malevolent organization.

Led by a grievance brigade composed of hard Left-leaning administrators who devise and direct curriculum, order-taking foot soldiers masquerading as fair-minded educators in classrooms, and the traveling circus of feral anti-police agitators whose deluded rants inspire both, this sham discipline will be distinguished not by purpose served or objective, but by temperament. Advertised as opening up dialogue on a critical matter affecting CPS students, this course will neither begin nor end with educators delivering a rousing pep talk to students about the essential need to trust law enforcement or obey lawful commands from police. To the contrary, the Burge allegations will be re-shaped by CPS administrators into a symbol of widespread police brutality and corruption to open a pathway for classroom educators to depict Chicago police officers as homicidal maniacs.

While it is tempting to wish educators will address themselves to this new curriculum with prudence and delicacy, the fact many modern educators on all levels tend to identify with or sympathize with the anti-police crusade, it is improbable classroom instructors will forswear politics in an academic exercise expressly invented to inveigh against Chicago police officers. Drafted with antagonism by CPS administrators who have perfected the subtle art of fanning the flames of ugly passion, grievance and resentment, it will be carried out with the zeal of a religious convert by CPS teachers who consider their influence over their classrooms a birthright.

The creation of armchair sociologists and raving political activists who are determined to rig classrooms to achieve a specific outcome, the coursework’s basic lineaments are straightforward. Operating a range of perfectly-calibrated educational tools, skewed lectures predominant among them, CPS classroom mythmakers will distort the Burge case to grotesque levels and describe Burge as guilty of crimes of unprecedented savagery and character. Captivated by the spectacle, legions of students hearing the details of Burge’s non-stop horror show will obsessively take notes, complete untold assignments, participate in numerous activities, and be assessed to demonstrate their understanding of the material.

But by refusing to speak honestly and painting Burge as an unapologetic highwayman who oversaw a marauding band of police officers routinely engaged in white-sheet, nightrider justice, pupils in the professed “bias-free” CPS classrooms will have constructive discourse stifled and never hear essential truths about the case. With vitriol driving this new curriculum, students will never learn Burge’s first trial resulted in a hung jury; a second trial determined Burge not guilty; and how Burge endured two decades of legal harassment before being convicted of perjury and obstruction, not torturing suspects. Likewise, it will never be articulated to students that several police officers accused alongside Burge were acquitted. While the allegations leveled against Burge were never trivial or small, and it is perfectly reasonable to scrutinize police behavior, it is also a virtual certainty CPS educators will never expose students to the fact several accusations fixed to Burge were determined to be groundless.

In the organized chaos which has become the Chicago Public School system, anything is possible.

Stubbornly determined to go after the Chicago Police Department as hard as they can from any angle, lectures attacking police officers alone will be determined as insufficient. A schooling system in which educators do as they please, the CPS’ road to student enlightenment is wide enough to embrace a whole catalog of educational devices to measure students’ “learning experience.” To teach their version of Jon Burge, students and parents should expect an entire arsenal of weapons thrown into the CPS’ battle to discredit police, all of which will be defined as wonderful contributions to “learning” about police behavior.

While CPS educators busy themselves planting their poisonous intellectual seeds, consider the lively retellings students will offer when CPS classroom instructors assign students to record in writing their or family member’s experiences with Chicago police. Picture the CPS assembling a panel of alleged victims to address students on Burge. Would the CPS actually verify claims in advance of the invitation to speak or would dubious “survivors” be given an audience to pillory Chicago police? Would devious CPS officials grant con-artists who pose as “civic activists” or quack clergy access to schools to verbally pursue vendettas against police officers or recruit pupils to their cause? What about the prospect of attorneys known for representing thugs or pursuing vexatious litigation against officers or the department? Could they be among the cast of characters involved in speaking engagements? With Hollywood offering an endless string of films rendering police as armed lunatics with homicidal instincts, visualize a CPS classroom instructor organizing a discussion with students following the showing of Cop Land (1997), Righteous Kill (2008) or Witness (1985). Likewise, it is certainly not out of the question to envision an artistic dimension introduced to this curriculum. Imagine a teacher instructing students to paint murals in school hallways to represent what they have learned as a result of the Burge coursework. Is it possible to conceive educators directing students to resuscitate the vital lie of “hands up, don’t shoot” by producing an image of Michael Brown, the thuggish, notorious attacker of Officer Darren Wilson, as a victim of police “violence” mercilessly deprived of life by a blood-thirsty police officer? With the predatory nature of this curriculum in this CPS, let your imagination run riot.

This misuse of education is no solution to any problem anywhere in Chicago and will undermine civic harmony.

While controversial curriculum is nothing new, coursework as hostile as this crosses into new territory. A powerful indictment of the CPS, this curriculum does not represent a loss of control, but a loss of pretense the CPS is committed to maintaining a pose of cultivated neutrality when leading instruction in classrooms. In contrast, the pursuit of this curriculum reveals the CPS to be enlisting children to the propaganda purposes of educators and openly encouraging pupils to engage in political activity. Worse, this will be accomplished by providing students with blatantly false historical fact and misleading political information. For those willing to see reality, this distorted fiction about the Chicago Police Department is already being taught, but it is soon to be officially-sanctioned policy under the Burge curriculum.

While problems exist in policing, there is absolutely no justification for this curriculum. Despite the gravity of the Laquan McDonald shooting and the events which surround his death, it is an obscenity to nourish the lingering memory of a youth’s loss of life for the purpose of discarding educational standards. Doubly appalling, these educational yardsticks are cast on a scrapheap in order to depict police officers as licensed bandits or describe police tactics as verging on genocidal. Deplorable as it is to witness educators confuse animus with education and exploit tragedy to promote division, it is equally lamentable to see Chicago’s layabout mayor, Rahm Emanuel, and Police Superintendent Eddie Johnson remain passive as the CPS makes hostility toward police a virtue in classrooms. Accomplices with the CPS, neither have expressed public disapproval of the plan and both men likely consider this an effective mechanism to improve relations with the public.

However, the most devastating consequence of this short-sighted curriculum is the fact the CPS fails to recognize any potential hazards: Bitter and embittering, this instruction plan will contribute greatly to the creation of a new generation of students skeptical of police truthfulness and intent and possibly breed an avenger, which could someday soon herald in a new wave of violence. Similarly, the CPS fails miserably at recognizing a portion of students enrolled in Chicago’s public schools are children of Chicago police officers; these pupils could suffer shaming and humiliation as family are disparaged in classrooms.

This coursework reveals quite a bit about the leadership of the Chicago Public Schools and the direction they intend on taking its students. Having long lost sight of the noble goal of expanding knowledge, inspiring, exposing pupils to fact, and creating a marketplace to promote a free exchange of ideas, the CPS has abandoned all moral probity with the Jon Burge curriculum. By effectuating the Burge coursework, the CPS is forsaking compassion, tolerance and enthusiasm for educating children in an impartial atmosphere in favor of indoctrinating students, cementing an irrational hatred for police, and teaching attitude in the classroom. Now a cesspool of hatred, this misdeed will remain with the CPS for an eternity.

For all the hyperventilating over alleged police brutality and the need for federal oversight of the Chicago Police Department, perhaps it is more sensible for the Department of Education to descend on Chicago and negotiate a consent decree with the CPS.

Kim Foxx is Why Chicago is Doomed
The Cook County prosecutor and the bomb throwers.
Martin Preib
Kim Foxx Poisons the Well for Two Chicago Police Officers
Cook County State’s Attorney can never leave well enough alone.
Florian Sohnke
The Hijacking of the Illinois Governor's Office
By all means, Governor Pritzker, let’s look at everything that “has occurred” in the exoneration industry's takeover of the governor's office.
Martin Preib
Chicago Police: One Percent For Lori
The size of Mayor Lightfoot’s “Command Post” comes under scrutiny.
Benjamin Blair