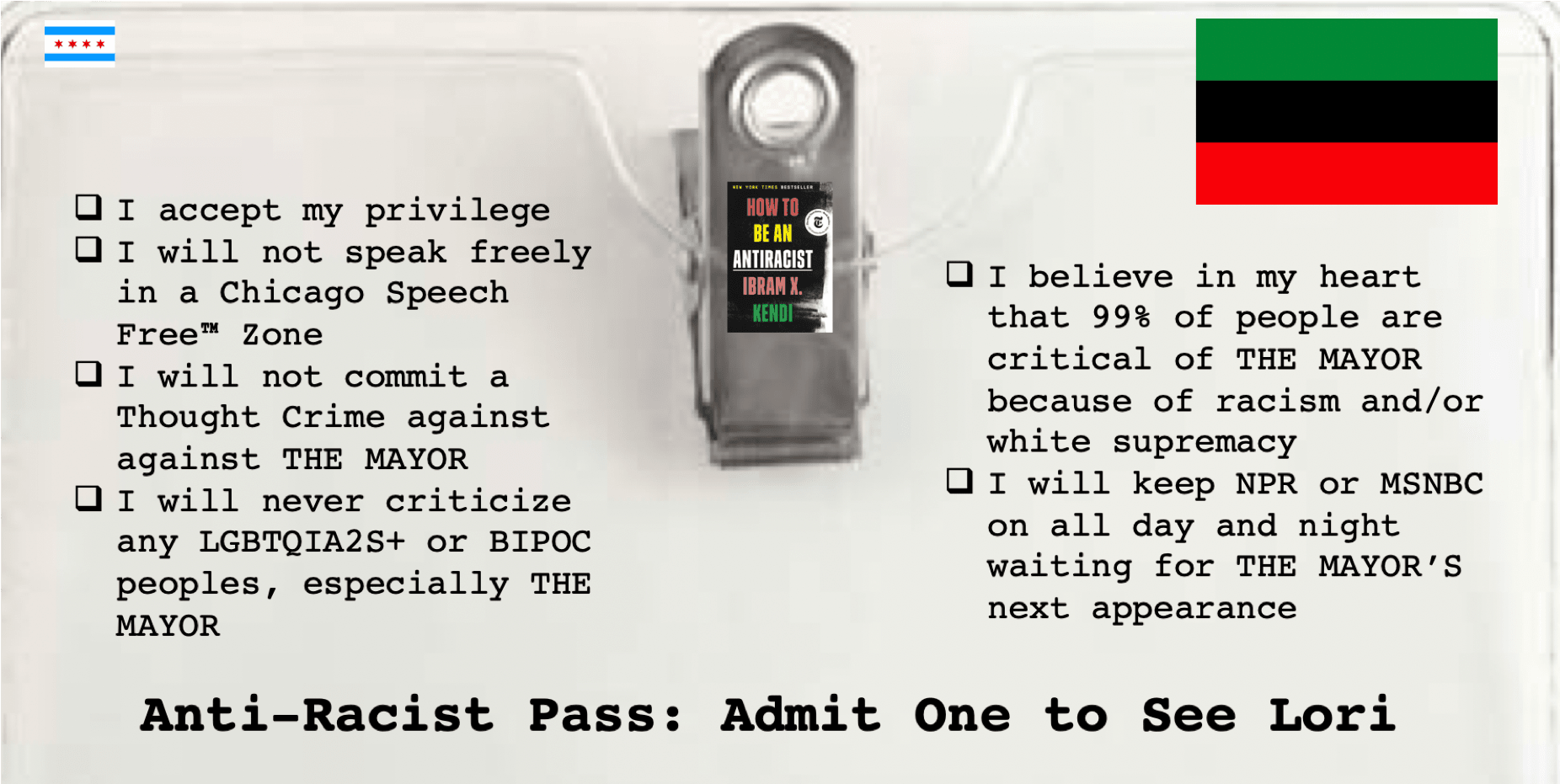 “The choice for Chicago lies between freedom and happiness and for Northsiders, happiness is better”

From the desk of Lori:

On the advice of Dr. I Kendi and his entourage, we’ve launched a new anti-racist initiative to make the entire Northside of Chicago the first Speech Free Zone™ in Illinois (I registered the trademark for The Party just this week.) ShotSpotter is contracted with us to expand their business into thought monitoring to provide enforcement. And we’ve secretly been working with the full support of the CTU to pilot Speech Free Zones in high schools thanks to the hard work of the new crop of Restorative Justice leaders.

Even that bastion of white privilege, the Latin School, has implemented a zone as part of its anti-racism programming. Rumor is they made an example of a student for violation of the Gold Coast Speech Free Zone (the thought crime: failure to be attracted to another race) as part of this year’s “Two Minutes of Remote Learning Hate.”

I can’t wait for the new Latin teacher’s union (Illinois Federation of Teachers) to take full control of the school – yep, we helped behind the scenes to push it through – and launch this to a new level with full-time in person learning this fall. According to those white supremacists at The Daily Wire, Bernard Zell Anshe Emet Day School has already fallen into line too. Even Jews are now confessing their privilege. Mission accomplished!

This stuff plays so well on the Northside, which I hear is even close to renaming Lincoln Park to something more equitable (Lincoln was a colonial oppressor and racist, you know). There’s a problem though. Syb is advising me that if I have any chance of re-election, that I need to stop blaming my job performance on racism. She told me that these claims never worked with the African American community who care most about reducing crime and real policing, despite what Northside progressives and Kim believe. In addition, one Englewood minister told me his congregation “wants to be judged on the content of their character” per Dr. King, which might help them, but it does not help The Party or your MAYOR.

Still, I’ll listen to as much of Syb as I can when, as it has been an absolute pleasure to watch her passion for equity, inclusion and public service deepen — values that are essential to have as the Chief of Staff. Syb also had a great idea last week: The issuance of an Anti-Racist pass to everyone who wants an audience with me.

The pass will offer unfettered access even for journalists who identify as oppressors (Asians will require it too):

Obtaining an Anti-Racist Pass will require signing a pledge:

Northside progressives will eat this up. And we know who all of you are! I’m thankful to Amazon for sharing their list with me – God bless big tech – of every XC90 or Range Rover driving Karen who bought White Fragility in Lincoln Park, Andersonville, Gold Coast and Lakeview. That formed the basis of my initial top donor list, and they’re still lapping this stuff up. You go Robin! And thanks, Jeff!

To encourage a frenzy to get the pass, I’ll run a lottery with my fans on the North side, with the winner getting a private audience with Kendi (he’s so cute, I almost want to pinch his butt!) next time The Party meets in Chicago. And we’ll toss in a free pair of glasses featuring me on the Millennium Park Telescreen.

With a Northside Speech Free Zone and my Anti-Racist pass, Big Sister is ready for DC next!

EVEN THOUGH YOU DO NOT COME TO THE OFFICE ANYMORE, you can use Twitter (@LoriLightfoot) or any Party-approved social media app to voice your support or blame racism for everything wrong with Chicago. And be sure to tag @ChicagoContrar1 as well if you like satire Lori Lightfoot style!