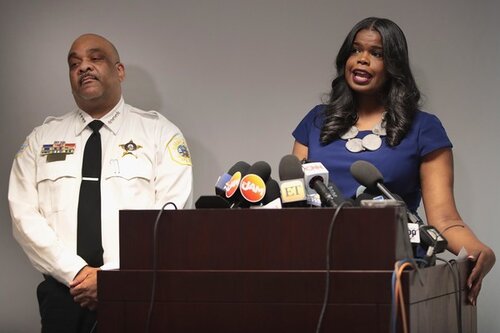 We’ll take tough on crime over leniency any day of the week.

Throughout history, mankind has witnessed falsification on both a small and grand scale.  In the course of man’s existence, rarely has there not been time period in which some figure has come forth to claim, untruthfully, they are indeed the Messiah, predict the apocalypse, or advance crackpot conspiracy theories.  In a claim a bit closer to home late last year and on a much smaller scale, Eddie Johnson, the former superintendent of the Chicago Police Department (CPD), held a press conference to announce officers had confiscated 10,000 guns from city streets through the end of November 2019.

A slight rise from guns seized in the two years prior, a re-creation of the briefing on November 25 saw the former police superintendent greet the press and reveal the milepost to a city which, at the time, had suffered over 400 homicides while surrounded by First Deputy Superintendent Anthony Riccio and Chief of Patrol Fred Waller.  While the claim 10,000 guns removed from the streets does not reach absurdity, to come to terms with Mr. Johnson’s claim would more or less require a sacrifice of logic.

While all public officials are guilty of puffing up an achievement to burnish their record at some point in their career, Mr. Johnson’s assertion is worth a brief examination.  To fully grasp the complexities surrounding the circumstances under which a weapon is removed from Chicago’s streets, it is crucial to understand the methodology under which the CPD classifies a weapon recovered.  According to CPD procedure, a weapon seized from the street falls into one of three categories:  (a) The result of an arrest of a suspect in possession of a firearm; (b) recovery by a sworn officer; or (c) what is referred to as a “turn in.”  While countless firearms taken from the streets are the outcome of impeccable policework, it similarly must be taken into consideration some weapons are subject to the constant flux in laws enveloping legal gun ownership.  Apart from this plain truth, officers state as many as half of the weapons the former superintendent claimed were recovered in 2019 came into possession of authorities by virtue of a court order as a condition of bail or bond, a revoked Firearm Owners Identification card (FOID), which requires owners to surrender a weapon, gun buybacks, which are held almost on a weekly basis, and conscientious residents randomly turning a firearm over at a local police district building.  While the court carrying out its duties, good citizenship, and gun buybacks are commendable, the harsh reality is a majority these weapons are often legally owned and the probability any were ever used to commit a crime is exceedingly low.

Though the estimated 5,000 weapons removed from the streets under these circumstances is meaningful, and it is fair to assume the remaining 5,000 guns taken from the streets is testimony to superior and heedful policing, Johnson’s claim 10,000 guns were removed from Chicago’s streets should swear to serenity restored in Chicago’s neighborhoods.  The fact it does not, however, does come with an explanation.  A city which suffers astonishing violence, Chicago police officers say there are several factors involved with homicide and violence levels remaining consistent in defiance of 10,000 firearms removed from the street.  Despite moderate success in removing firearms in the course of duty, police say one obstacle to civility restored to the streets is the persistent, hyperbolic yammering from anti-police groups, which dissuades police from engaging in any form of vigilant policing.  Similarly, officers say interference from civil liberties groups such as the American Civil Liberties Union (ACLU) handicaps police from removing criminal offenders and netting unlawful weapons.  To cope with the liberties group’s meddling, police have been compelled to abandon proven methods of policing.  While police say the freak show put on by Chicago’s anti-police posse and the prying eyes of the ACLU have forced them to forsake efficacious policing strategies, officers say the greater menace to mitigating gun violence and maintaining law and order in the Windy City is Cook County State’s Attorney Kim Foxx.

If 10,000 firearms were removed from Chicago’s streets in 2019, where are the felony charges from Kim Foxx’s office?

While Mr. Johnson’s claim of 10,000 firearms removed from the streets is a misdirection, he should not be accused of being a trafficker in the illicit merchandise of fake news owing to the fact his claim is anchored in the politics of crime statistics.  However, if we set aside politics influencing crime data and concern ourselves with the fact approximately 5,000 weapons are taken off the streets in the course of police performing their duties, a natural question arises:  How is Kim Foxx’s office responding to police requests for felony charges to gun offenses?  Though police are plainly completing their duties by recovering weapons from criminals, officers say Ms. Foxx is willfully neglecting to fulfill hers.

A fact not to her credit, to grasp how the relationship between police and the Cook County prosecutor’s office functions regarding criminal investigations, it must be understood at the outset police present the facts of a criminal case to the State’s Attorney’s Felony Review Unit.  Generally speaking, the facts of a case can include various forms of evidence:  Eyewitness accounts from a police officer, witness statements from observers to a crime, and a weapon.  Although Ms. Foxx is keen to broadcast with a bullhorn her office approves 92 percent of the illegal gun cases presented by police, what Foxx declines to advertise to the public is the fact her office, in what is obviously a matter of deliberate policy, often reduces the initial felony charge to a misdemeanor or dismisses the case altogether.  Put differently, the reduction of or dismissal of felony gun charges on a regular basis returns the offender to the street.  A standard unlike what occurred under her predecessor Anita Alvarez, this is Ms. Foxx treating gun crime remarkably lightly.

Kim Foxx presents a unique challenge to Cook County residents and the law.

On the most fundamental level as prosecutor, Kim Foxx’s duty is to play a significant role in protecting public safety.  Ms. Foxx, however, has forgotten this core function and has opted to satisfy social justice precepts.  Public safety is intended to be civic government’s foremost concern, but under Ms. Foxx’s policies a drastic shift has occurred, one which places a greater emphasis on protecting or observing the rights of criminals.  Far from a sustainable policy in the prosecution of crime, if we pull the curtain back and expose the implications of Ms. Foxx’s “holistic” thought, we behold example after example of people with villainous intent charged with violent crimes or with possession of an illegal weapon who, by her grace and with her blessing, dodge felony charges and are promptly returned to the streets.  Most resume their criminal behavior.  A school of thought which in practice resembles a jailbreak, the guiding principle of Ms. Foxx’s “holistic” anti-crime prescriptions is leniency.  The logic of such leniency, Foxx insists, is to end “mass incarceration.”

However, by pursuing her “holistic” vision for confronting crime to a maximum, Foxx is abandoning genuine victims and survivors of real crimes and placing innocent people at risk.  A fundamental moral measure of the criminal justice system is how it reacts to violence and how it responds to those harmed.  At the moment, Kim Foxx is neglecting the hurt and needs of victims and survivors of crime, and as a consequence many neighborhoods have lost all sense of security.  Moreover, by allowing criminal offenders to escape any repercussion for their actions and making their return to the street possible, Foxx is allowing larger, more serious crimes to flourish.  Worst of all, Foxx is failing to recognize how the consequences of her permissiveness with crime fall most heavily on law abiding residents in high-crime neighborhoods.  While Foxx’s holistic philosophy may be effective in Mayberry, a sleepy community in which the worst case of recidivism is the town drunk, Otis, this is Chicago, a city in which heartless, wanton brutality are common fare.  What Cook County residents deserve is a chief prosecutor committed to restoring a sense of civility to everyday life.  Cook County residents are owed a prosecutor who understands the common good is undermined by criminal behavior.  Most important, Cook County residents deserve a prosecutor who believes submission to the law is essential to man, people’s lives should never be held together by fear, and punishment should reside next to humanity in the course of justice.