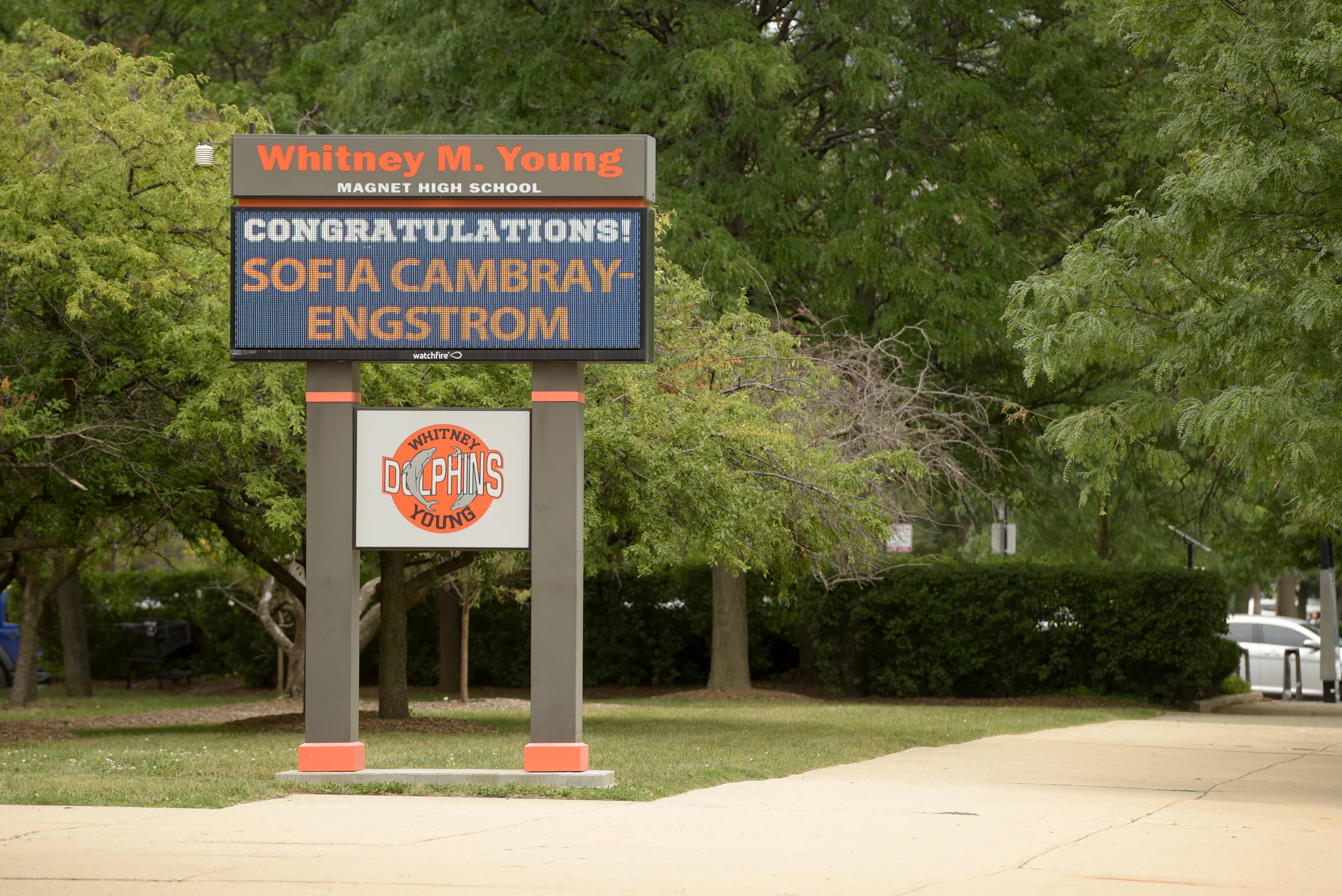 For some of these top schools, the city-wide admissions rate can be as low as 2-3 percent overall (<1 percent in certain zip codes), based on past data, although current numbers are not published. However, the overall admit rates and requirements are deceiving as they can vary by an order of magnitude based on zip-codes as a proxy for race, as traditional race-based affirmative action was struck down as illegal for school admissions in the city.

For example: A child in a South or West Side neighborhood can score an order of magnitude lower than one for grades and/or tests in an affluent neighborhood on the North Side and still gain admission. The specific formula for determining tiers is based on neighborhood income, educational level, home ownership, single-parent family rates and local school performance, among other criteria (because clearly “income” alone as a criteria would not provide an outcome equity enthusiasts would want, given whites are the second most impoverished group in Chicago after blacks).

In addition, students can also gain admission under “Principal Discretion” which one North Side parent described to Chicago Contrarian as “another tool in the equity-centric admissions toolbelt.”

Historically, both Select Enrollment and Choice schools require an application, each with different criteria for admission. In the case of select enrollment high schools, children are scored via a rubric consisting of 900 points. Pre-pandemic, the points came from three separate variables: A child’s grades, test scores on the NWEA MAP test and the city’s Select Enrollment entrance exam. The Choice schools historically used only grades and NWEA MAP scores with heavier weights placed on each to tally to the 900 points.

‍As a result of the pandemic and lobbying on behalf of both parents and CTU, CPS decided to jettison the NWEA MAP scores entirely as part of the admissions process to, you guessed it, “promote equity,” in their words. But make no mistake: “Equity” is a cover for declining standards, as the separate test would have shown the staggering decline in the academic progress of the city’s children, including the most vulnerable black and brown students.

Moreover, by placing 50 percent (vs. 33 percent) of the admissions criteria on the non-directly comparable “grades”, which are generally all “As” for students applying to Select Enrollment schools given grade inflation, and only 50 percent on standardized tests (vs. 33 percent), CPS will be dumbing down the admit pool from all but the most tony zip-codes.

Under the cover of equity, these changes came about because of Chicago’s rallying cry around equal outcomes for students regardless of inputs, the hallmark of progressive equity-centered education policy.

But beyond eliminating the central standard test to measure comparative student progress nationwide as part of the enrollment process for these schools, CPS also quietly shifted the number of seats available to Individualized Educational Plan (IEP) kids from 10 percent of each school’s total student body to 15 percent as part of the sweeping changes taking place behind the scenes.

In other words, each school now has fewer spots available for deserving children based on merit. Chicago Contrarian does not begrudge these IEP children or take a position on this change, specifically, but the increased numbers of IEP students does mean a profound shift in student makeup is quietly occurring.

In short: Whereas many parents believe this will give underprivileged children a greater chance of obtaining a coveted select enrollment seat, it also means the new losers include students who would have previously earned a seat based on merit if they live in the affluent North Side. Fewer of them will obtain those seats despite bringing significantly stronger grade and test-score credentials (even before “Principal Discretion” is considered).

For example: For the first time in the school’s history, only “perfect scores” will get you into Northside College Prep and Walter Payton in the “Rank-based” applicant pool. The notion of "Rank" seats includes the school’s set asides for students that have absolute scores high enough to obtain a seat, regardless of what neighborhood the child hails from.

Furthermore, the Tier 4 (Gold Coast, Lincoln Park and other tony North Side neighborhoods) cutoff for Payton requires a perfect score. In other words, if a bright child from the North Side obtained an 898/900, they could not attend Payton based on rank.

At Northside College Prep, the Tier 4 cutoff score is 896, again, near perfection.

Said differently: Because of the increase in IEP kids per each school and the continued proliferation of the race-proxy tiered system, fewer and fewer slots are available to children based on merit. Consider Lane Tech College Prep. Last year’s graduating class of seniors got “accepted” as freshmen in the Tier 4 zip codes with an 842/900 score. For 2022-2023, that number climbed to 870.

Yet outside of the “Rank” and “Tier 4” tiers, admissions standards continue to decline.

That means pupils with lower scores in other tiers can obtain coveted IEP spots, as well as lower tiered spots. For example, at Lane Tech, the cut-off score for 2022-2023 for Tier 1 was <800. To put this score in perspective, a Tier 4 student would need to score over 30 percent higher on their standardized test according to CPS data (assuming similar grades) to obtain admission to Lane. This percentage difference rises to ~40 percent for the difference between Tier 4 and “Rank” admits.

The result of all of this is kids that actually scored higher find themselves potentially without a seat at their school of choice, given that a majority of the seats at these schools will now go to kids who were admitted not based on merit, but based on other criteria as the determining factor.

In other words, CPS is furthering a program of “selectively for me but not for thee” along equity lines. And it’s only going to get worse, which in turn will drag down the overall outcomes and performance of students across CPS but especially at the city’s best schools.

CPS recently introduced two proposals for comment — one of which will likely become policy for the 2023-2024 school year:

‍"Chicago Public Schools is recommending the board reconsider the selection portion of the Admission Policy for Magnet and Selective Enrollment schools. It is recommended that the board consider reweighting the tiers in one of two ways."*

* Editor’s Note: IEP students are selected in a separate pool, taking away spots from the above percentages.‍

Along with an increasing number of seats reserved for IEP admissions, and the swift phase out of standardized tests as a factor for admissions and “Principal Discretion” admissions, the implementation of either Option 1 or Option 2 will represent the beginning of the end of anything “Selective” about enrollment at Chicago’s top schools for the majority of applicants.

The danger of doing away with merit-based admissions (e.g., testing standards and grades) means select enrollment high schools will swiftly become more like many of the poorer performing neighborhood schools. Consider the data from the Illinois Assessment of Readiness or IAR exam taken each spring for students from third through eighth grades. According to an article from the Chicago Sun-Times last December, “At CPS, 21 percent of kids met or exceeded English standards this year, compared to 28 percent in 2019. In math, only 16 percent met or exceeded expectations, down from 24 percent the year before the pandemic.”

According to Niche.com, other data, likely pre-pandemic, also paints a very sad picture of the efficacy of a CPS education. (Ed Note: Some believe the C+ grade appears gratuitous)

‍According to a recent report, Los Angeles public schools have seen significant enrollment declines from 737,000 students 20 years ago to 430,000 today. Whereas enrollment has continuously fallen in L.A., the pandemic accelerated families’ decisions to leave the public school system. Distance learning and teacher demands for that have caused parents nationally to reconsider where to send their kids for school.

In Los Angeles, the decline in enrollment will continue as long as the performance of the district as a whole continues to underwhelm. The data here appears dismal, similar to Chicago. Math scores across all of California’s eighth graders suggested that they had attained the knowledge and skill level of fifth graders, according to standardized test data. Moreover, and perhaps more insidious, an analysis of the data shows that students had been falling behind each year well before the pandemic. Of course with distance learning, progress completely stalled according to the article.

Chicago enrollment and academic performance mirrors the failures of Los Angeles. It’s why charter schools, home schooling and many alternative private schools have thrived. In fact, CPS enrollment declined by 22 percent between 2004 and 2021 (434,419 to 340,658), dropping approximately three-times as fast as the population of Chicago overall during the time period, while the average age of residents remained similar.

‍Critical Race Theory (CRT) and Gender Equity: The icing on the cake

‍Now with a new, political focus on gender equity to complement racial equity over the many other critical topics necessary to provide today’s youth with the tools to become successful citizens, neighbors, employees, community members and leaders, the academic integrity of CPS and its schools have paved the way for a very rapid decline indeed.

Heaven forbid schools teach children “how to think.” Instead, the new social justice activism has peppered every single aspect of student life, further detracting from time spent learning the fundamentals that drive, you guessed it — MAP and standardized testing scores.

For all of the hullabaloo over Disney attacking Florida Governor Ron DeSantis’ “Don’t say gay” law (which of course, does not even mention the word gay) it should go without saying, though we will reiterate, the reality in Chicago: CPS believes all kids at all ages should learn about gender and elements of CRT, even at the tender age of preschool — over math and reading.

The district’s obsession with equity means administrators and those that set curriculum have spent their time developing gender identity protocols instead of examining how to improve students’ reading and math scores. Consider the time and dollars devoted to bathroom gender considerations from a recent communication from CPS (editor’s note: yes, tax dollars at work):

‍In addition to the Frequently Asked Questions document, we have provided additional resources and materials for you, including:

It doesn’t require knowing the pronouns for all 63 genders to realize that identity politics combined with the recent changes to entrance standards and 2023-2024 admissions changes will bring further inequitable outcomes for all children at these formerly “elite” public schools.

Perhaps the ultimate tragedy of this is that it is precisely the poor black and brown students who are poised to suffer the most from the dumbing down, and eventual elimination of anything resembling select enrollment in Chicago. And for that we have CPS, the CTU and Lori Lightfoot to thank.

But at least boys (or those boys that identify as girls) now have the chance of leaving the toilet seat up in the girl’s bathroom.