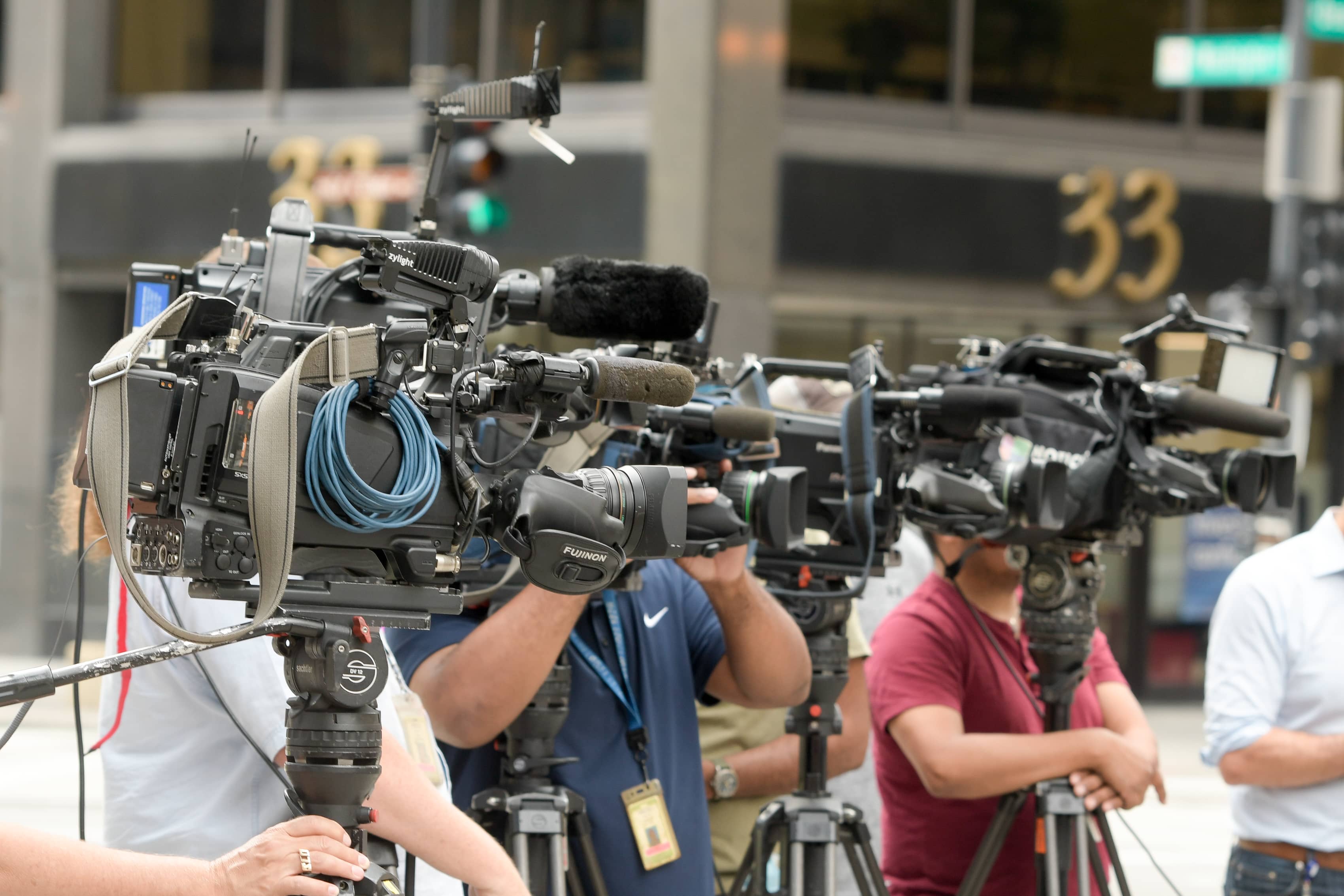 A funny thing happened to “journalist” Carlos Ballesteros on his way to publishing an “investigative” article about two Chicago police sergeants who review visa applications for immigrants wishing to remain in the country because they have been victims of crime.

The writer for the non-profit news outlet Injustice Watch seems to have left out or lost some compelling facts and context in his bizarre article, “Chicago Police Denied Scores of Undocumented Crime Victims a Path to Citizenship.” When taken together, the missing pieces in the article cast yet another dark shadow on the substance and motives of Ballesteros and Injustice Watch.

The missing pieces in the article are nothing new. Injustice Watch is illuminating not so much for the articles it calls journalism, but as a paradigm of how contemporary journalism has degenerated into pathetic, extremist advocacy in the name of journalism.

In this latest manifestation of journalism gone wild, Ballesteros tells the story of an apparent, unfortunate truck driver, who, Ballesteros says, was the victim of a battery and robbery while driving his truck on the far South Side.

The immigrant truck driver, Nodirjon Zakirjonov, pulled over after having brake trouble when he was struck on the back of his head and stabbed in the abdomen, the article claims. Ballesteros does not mention if there were any witnesses.

But unfortunately, the truck driver’s ordeal continued. The villain? The big bad Chicago Police Department. Brace yourself for this tragic, harrowing agony: When Zakirjonov went to apply for the visa, he was turned down, according to the article. How could it be?

Well, brace yourself, because it is a doozy.

“First, police officials said he needed to prove his identity,” Ballesteros tells us.

The nightmare continues, according to Ballesteros.

Chicago police then told the truck driver that “a detective had tried to reach him to no avail.” What? So, the police took up his reported crime and tried to investigate it, but they couldn’t get ahold of the truck driver? Here is a question Ballesteros might ask: Why couldn’t the detectives get ahold of you? If you want to stay in the country because you were the victim of a crime, shouldn’t you at least be accessible to investigating detectives?

In the strange world of Injustice Watch, it appears not. It is as if they are arguing, who cares if the police are trying to conduct an investigation and establish the elements of a crime, to get the facts of the incident as best they can and then write up a report on it? Who cares if detectives cannot even get ahold of the complainant?

First, no identification, no establishing the crime. How tyrannical can the police get?

Well, apparently much more, so brace yourself.

"After Zakirjonov sent a sworn affidavit promising to help investigators, CPD denied him a third time, telling him that he needed to call detectives and ask them to reopen his case," Ballesteros tells us.

The victim of a crime had to make a phone call? Reopen the case? This injustice cannot stand! Who do the detectives think they are, attempting to fully establish a crime before they grant someone a visa? Talk about an out-of-control police department!

So it goes. An article so full of journalistic holes that it should have been the subject of embarrassment and ridicule by the rest of the media, the ones almost clamoring about transparency, accountability, and diverse voices, was in fact shared by journalists on social media as a compelling work of investigative reporting. Such is the state of journalism, or rather non-journalism, in Chicago.

The Injustice Watch article is one of many manufactured hits on the Chicago Police Department cranked out by the publication. Everything the police wanted before handing out the visa seems not only perfectly reasonable, but also appropriate given the explosion in crime throughout the city.

The migration of some five million immigrants across the border since Democrats took over the White House never found its way into the Injustice Watch article. Among the millions who have crossed the border into the U.S. since President Biden entered to Oval Office include some 100 people on the terrorist list.

Perhaps the greatest fault in the article is that it zeroes in on two sergeants who oversee the approval procedure for obtaining visas. The two sergeants, Brandon Ternand and John Poulos, Injustice Watch tells us, “have fatally shot civilians and had serious questions raised by investigators about their credibility.”

Ballesteros is kind of missing some important facts, Injustice Watch. Both Ternand and Poulos were cleared by the Chicago Police Board after an exhaustive investigation by a civilian oversight agency, COPA, which most police officers in Chicago believe is an extension of the anti-police movement. So fed up are police with COPA and the Police Board, they have made replacing this process with arbitration a central focus of contract negotiations between the Police Union and the city. For the officers to survive scrutiny from the Police Board and COPA, both likely had a compelling case.

And they did: In Ternand’s Police Board hearing over the shooting, top supervisors testified he was one of the best officers in the district. Though not mentioned in Injustice Watch’s P.R. piece for the war on police, Ternand reasonably believed the man he shot was armed because Ternand was chasing him and saw a gun on his person. The “civilian” was a known violent predator in his neighborhood.

Although Ballesteros does mention a .22-caliber revolver was found after Ternand fatally shot Dakota Bright, he never refers to the discovery of the weapon at the very location at which Ternand and his partner began chasing the teen, which strongly suggests the teen had the firearm in his possession before he fled police. Also not mentioned was the fact that Ternand was awarded a Special Commendation for his actions that day.

Ternand is a shining example that once an officer faces an accusation, the media, political, and legal forces will use these accusations time and again to further attack them, even when there is ample evidence both men were doing their job not only correctly, but heroically. Such evidence, like the award Ternand was given, is merely ignored by the media, as it was by Injustice Watch in their hit piece.

It didn’t matter. Like a collection of cowering circus animals awaiting treats for their obedience, the sycophants in the Chicago City Council took up the nonsensical claims of Injustice Watch and called for hearings. Absent of any principle or backbone, the cheap theater of government in Chicago reveals itself as vulgar political pornography. There is little doubt Ternand’s heroic work in fighting gang violence on the South Side will be tossed aside as he faces grilling from the posturing of the City Council gaggle, with a drooling collection of quasi-reporters scribbling down their every utterance.

The real obligation of governing, the one calling out for their attention and wrath, the one justifying that the city should be questioning the process of allowing immigrants to remain in the city, will never make it to the floor of the City Council, let alone the vapid pages of Injustice Watch.

This would be the chicanery and corruption of Kimberly Foxx, whose prosecutors withdrew from fighting a certificate of innocence for two men exonerated of double murder in 1998. The two men, Gabriel Solache and Arturo Reyes, were illegal immigrants at the time they were convicted of slaughtering a couple in their home and kidnapping their two children.

In one of the most bizarre chapters in Chicago crime history, Foxx’s prosecutors refused to retry the men even though prosecutors openly admitted they were convinced both men were guilty. Then, only weeks ago, Foxx’s prosecutors quietly withdrew, without explanation, from contesting a certificate of innocence for the men, bolstering their crusade to not only justify their unjustifiable release from prison, but also obtain a multi-million-dollar settlement from the taxpayers via a federal lawsuit.

When will Injustice Watch tell the public about this dark story of crime and illegal aliens and Foxx’s role in it?