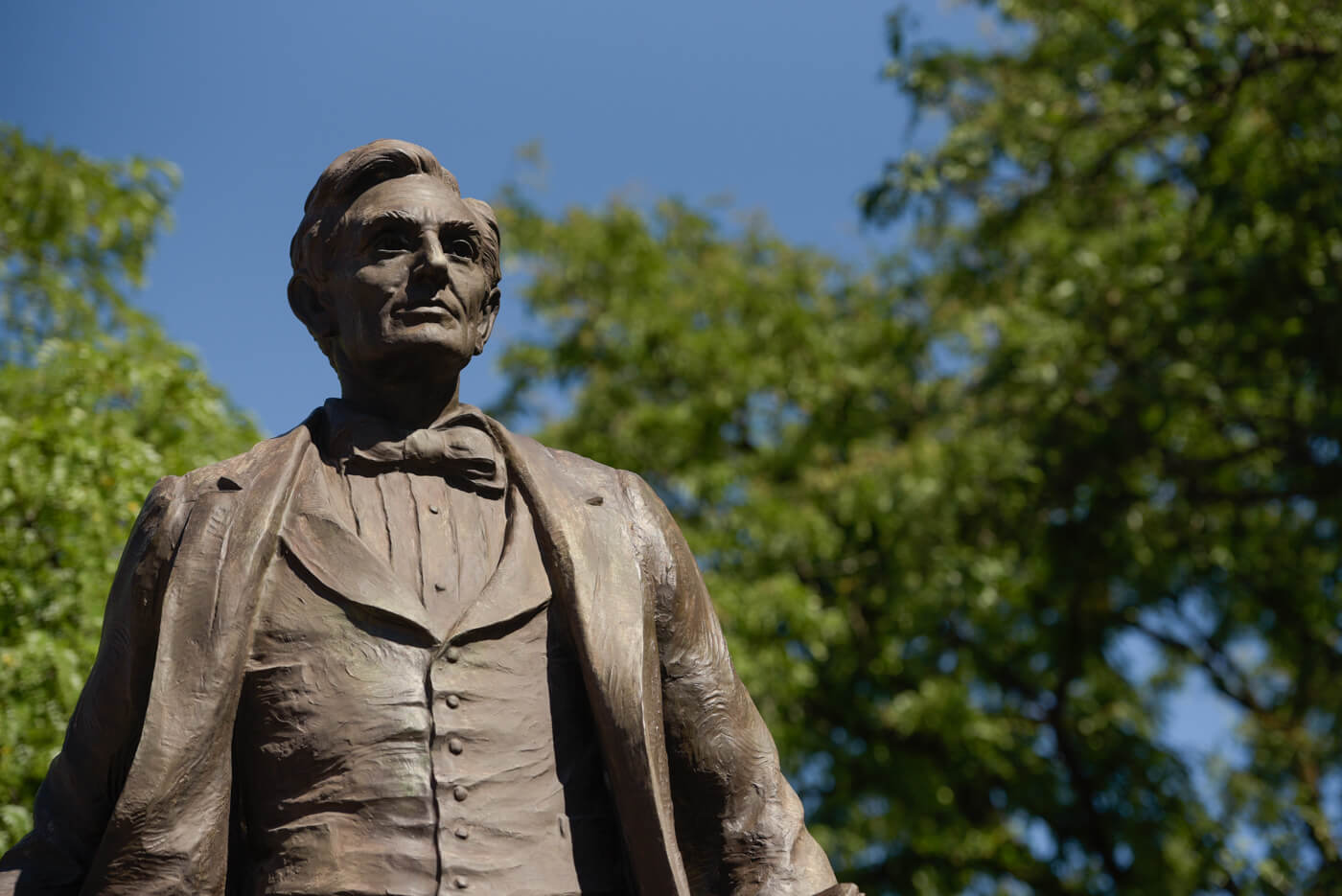 The Windy City has its history right.

From the very moment cities first arose, their residents have erected statues and monuments in public spaces. Respectful gestures to men, women, and significant events, the placement of these memorials and statues have become a vital feature representing enlightened urban life.

Like most cities which experienced the 19th century, Chicago is adorned with statues and memorials. Though Chicago does not claim ownership of the quantity of sculped images found in Washington, D.C., New York City, Boston or Philadelphia, the Windy City does claim a great tradition of figurative civic sculpture. All are appealing, undeniably grand monuments to men and women of exceptional courage and virtue and events worthy of honor and celebration.

Until a decade ago, few gave any of these statues a second thought. Nevertheless, following the death of George Floyd while in the custody of Minneapolis police in May 2020, a mass-grievance movement aiming to mangle history was stoked. Though the mob’s intent was to rampage through public space and cast important figures on the ash heap of history, their embrace of violence, vandalism, and property destruction was defined as “peaceful” and righteous by the political Left. Burning with a cold fury, in cities across America masses of unruly woke fanatics toppled statues of beautified figures in American history. Declared putative symbols of white supremacy, dozens of statues were defaced or felled. Of particular interest to this woke mob was early explorer, Christopher Columbus. A man whose reputation has been marred by the fantasy his arrival in the New World led to the deliberate extermination of the local populace, eventually officials in over 30 cities either tolerated mobs tearing down Columbus statues or soon removed their Columbus statues.

Columbus, however, was not the mob’s only object of vilification: Across America’s fruited plain, the monuments targeted by the crusade to topple statues grew exponentially to encompass the likenesses of America’s Founding Fathers, President Abraham Lincoln, and, oddly, abolitionists. The mob’s impulse to sanitize American history and compel its inhabitants to comply with modern moral benchmarks, the movement to purge a collective heritage swiftly matured to move beyond demanding the removal of statues to insist on the re-naming of streets, schools, roads, and bridges.

Regrettably, Chicago did not enjoy immunity from the woke insanity which swept the country during the summer months of 2020. By mid-July of last year, only weeks after angry mobs left sections of Chicago smoldering, vandals with a strikingly different interpretation of the role Columbus played in world history attempted to remove his image from its plinth in Grant Park. Though a gang of social justice activists and members of far-Left terror groups Black Lives Matter and Antifa failed in the attempt to overturn the Columbus statue, in a spineless capitulation to social justice warriors seeking retribution, Mayor Lori Lightfoot removed two Columbus statues from Grant and Arrigo parks in the dark of night.

Though the mob was briefly appeased, the absence of Columbus in the public square did not settle the controversy associated with the statues. In a shameful moment of civic irresponsibility, Mayor Lightfoot fanned the flames of racial discontent by empaneling a commission to study over 500 landmarks on public property. Fundamentally a truth and reconciliation commission for art deemed offensive, the Chicago Monuments Project has thus far branded 41 monuments deserving “public discussion.” Though the Chicago Monuments Project proudly asserts no decision has been made on future the 41 memorials under consideration, we should not let ourselves be fooled: The fate of these monuments has likely been decided. The fact many of the figures listed by the Project have been denounced as representing white supremacy or thinly disguised and blasphemous attacks on Native Americans in Chicago and elsewhere and the fact Mayor Lightfoot genuflected to the social justice partisans by removing the Columbus statues are disquieting signals the monuments listed have been marked as unworthy for public glorification.

Though the Chicago Monuments Project maintains it seeks meaningful dialogue to “ensure an inclusive and equitable outcome” and its aim is to consider statues or memorials which, in the panel's view, "warrant attention or action," it will be helpful to briefly consider the contributions of three men whose likenesses are on the Project’s chopping block. Of the three, Christopher Columbus, George Washington, and Abraham Lincoln, none fought for the Confederacy, which stood for slavery and secession, and none served a deranged, murderous dictator bent on genocide. In contrast, all three are towering figures in history, two advanced freedom and democratic principles in America, and none were ordinary. The fact these three men are listed for removal by the Chicago Monuments Project reveals there is no limiting principle to the panel's mission.

It was only 29 years ago, but 1992 marked the 500th anniversary of Christopher Columbus’ arrival in the Americas. An event which, doubtlessly, pronounced a momentous turning point for mankind and in the fortunes of two continents, an unbiased reading of Columbus’ log reveals his insistence on fair treatment of the people he encountered. Columbus’ logbook also records his desire to see the population “converted to our Holy Faith by love than by force.” Though revisionist historians have created a villain of the man and contend he brought genocide and disease to the New World, prior to the campaign to re-write history, Columbus was known to treat natives fairly, even when some of his contemporaries chose otherwise. Moreover, critics of Columbus ignore the fact the native population struggled with communicable diseases unknown to Europeans and slavery was widely practiced by Indians before his arrival. Despite attempts to befoul his reputation, what Columbus did was risky: Columbus’ courage to voyage into the unknown opened the way for others to sail to the Americas and inspired early navigators to journey elsewhere around the globe. A man who sailed for a much higher goal than wealth, Columbus should be remembered for a daring found in few men, establishing contact between the continents, fair treatment of the conquered, and civilizing a hemisphere.

The Father of our Nation, George Washington’s greatest strength was found not in strategy, but in leadership. Though often outmanned and outgunned by superior British forces while in command of the Continental Army, Washington brilliantly held together an untrained, poorly equipped, malnourished, and often unpaid army from collapse. Though Washington achieved the ultimate military feat — defeating and driving the British Army from the Thirteen Colonies — it was his career following his service during the Revolutionary War for which he should be venerated. Realizing he had much more to contribute to the fledgling nation, Washington was unanimously elected president of the Constitutional Convention of 1787 and his impeccable stature helped secure passage of the Constitution.

Assuming the civilian presidency in 1789, although Washington stated he was “unpracticed in the duties of civil administration,” he remained mindful how his behavior in office would influence future presidencies. Beset with the enormous task of contending with fervid domestic divisions while building a nation, as president Washington oversaw the adoption of the Bill of Rights, the creation of a central bank, the steadying of U.S. finances, and the entry of five new states into the Union in his two terms. In his second term, Washington quelled the Whiskey Rebellion and, despite intense pressure from Treasury Secretary Alexander Hamilton, kept a position of strict neutrality regarding intervention in foreign conflicts. Though a slaveowner himself, history has documented Washington’s sincere wish for a plan to abolish slavery. Never driven by personal vanity and free of soulless ambition, one of Washington’s most significant achievements was the example he set for future chief executives by declining to seek a third term.

The man who saved the Union, no occupant of the Oval Office ever faced a greater crisis than Abraham Lincoln. Though the threat of civil war existed prior to Lincoln, compromise between Democrats and Whigs delayed inevitable conflict. While anti-slavery candidates sought the presidency in every election after 1836, in 1856 the newly formed Republican Party emerged after its creators recognized the sense of moral and social superiority of the political forces on both sides of the slavery argument placed any political compromise beyond reach. Armed with a manifesto committed to ending polygamy and containing slavery, both of which were described by the Republican Party as “relics of barbarism,” four years after the foundation of the modern GOP, Lincoln became the Party’s nominee. Lincoln’s elevation to the White House in 1860 forever changed the relationship between the federal government and the institution of slavery: For the first time in history, an anti-slavery candidate had triumphed in the Electoral College. Faced with states which were seceding from the Union before he was inaugurated, Lincoln’s signature on the Emancipation Proclamation in 1863 while the Civil War raged doomed slavery to extinction.

Justifiably given lasting visual form in innumerable places nationwide, Lincoln’s greatest accomplishments are generally recognized as preserving the Union, vindicating democracy, and the eradication of the institution of slavery. While all are remarkable achievements, to fully grasp the magnitude of his presidency, it is vital to recognize Lincoln for having the will and the authority to defuse the most complicated exigency in the nation’s history and on the journey toward the notion slavery was unacceptable, appreciate Lincoln for having the wisdom to persuade a majority of Americans slavery was morally wrong and socially corrosive.

Chicago’s statues and memorials honor special contributions to the character of American life.

Our history is plentiful with moral complexity. Nevertheless, the City of Chicago has publicly venerated the right people and events for all the right reasons and every memorial or statue under consideration by Chicago Monuments Project deserves to remain firmly in place.

While Mayor Lightfoot considers the creation of the Chicago Monuments Project an audacious step toward racial reconciliation, it is nothing more than a goofy form of public therapy and a ridiculous attempt to indulge activists on a long march to re-write history. While the matter at hand has been discussed in public, it is worth mentioning Chicago Tribune columnist John Kass pointedly reminded his readers on February 19 a committee weighing the dismantling of statues or memorials will not reduce crime, re-open schools or lessen traffic congestion. Kass is correct to point this out. Building on Kass’ point, the removal of memorials will not prevent any mass shooting or a legitimate hate crime, nor will removing statues change events from the past. Nonetheless, this is not the point of the call for the removal of the statues or the creation of the Project. In contrast, the purpose of the movement is a mass catharsis by people who consider themselves powerless and are seeking agency. Instead of joining the band of reckless activists with a misguided sense of America’s past, Ms. Lightfoot would better serve Chicago by pushing back at the social justice movement by rejecting calls to remove statues and limiting the range of the Projects work to consider only the erection of new memorials honoring individuals neglected by history.

Memorials are never erected to obscure an individual’s flaws. Statues and memorials are a potent expression of noble ideals from once-in-a-lifetime moral visionaries, lawgivers, figures of unparalleled wisdom, and men and women of distinct character to whom we owe a great debt. Memorials stand to commemorate great conduct and remind future generations of the need to appreciate genius and emulate the deeds which built a great society.

Chicago’s memorials give life to the greatness of individuals in our past. Mayor Lightfoot should keep the flame of their memory alive.