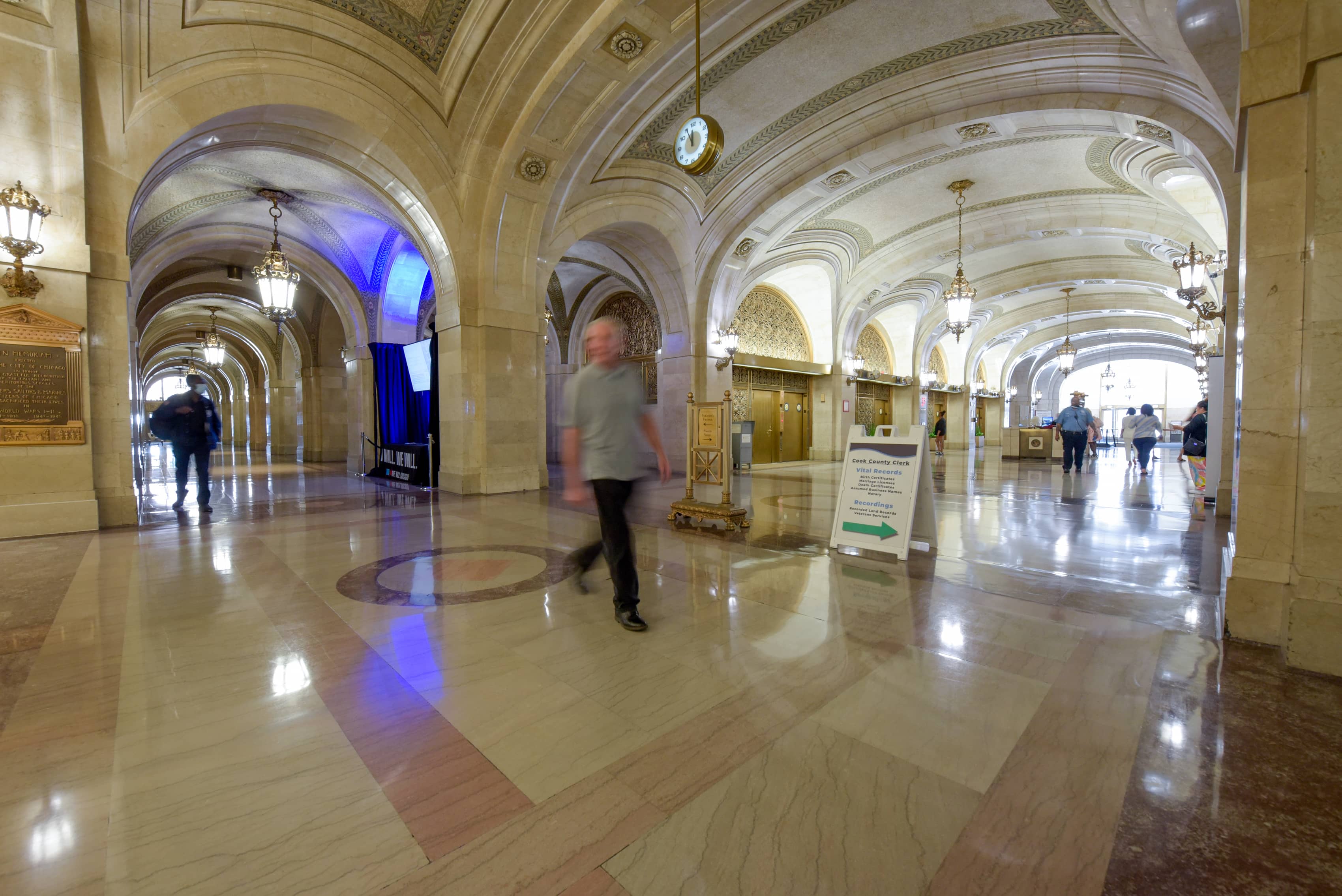 Mayor Lori Lightfoot got exactly what she wished for

‍By the early 1970s, the anti-war movement in the United States had been agitating for a pullout from Viet-Nam for over five years. At the time, tensions surrounding the war, the civil-rights movement, and radical leftism spilled into the streets in the form of mass demonstrations and rallies, violent clashes, and murderous domestic terrorism.

A time of counterculture and activism, the anti-war slogans and domestic eruptions had begun to sap the military of its faith in the U.S. mission in Southeast Asia. In November 1971, an anti-war sentiment bloomed on a U.S. Navy warship, the USS Coral Sea, which was moored in San Francisco Bay. Due to sail for Viet-Nam from Naval Air Station Alameda, in the days before the aircraft carrier’s departure, some 1,000 of the ship’s 4,500 crew members resisted the return voyage to Asia. Forming a group “Stop Our Ship,” eventually 35 crew declined to carry out their duties and instead implored for a refuge.

Amid the “Stop Our Ship” controversy, the Berkeley City Council joined several churches in Alameda County to offer “sanctuary” to any Coral Sea crewmember opposed to the war. A bastion of far leftism which worshipped Castro’s Cuba, Ho Chi Minh’s North Vietnam and Mao’s China, Berkeley’s City Council later drafted and approved Resolution #44,784, which gave sanctuary to naval seaman who, for reasons of their own, did not feel compelled to fulfill their sworn duty. The birth of the “sanctuary city,” since 1971, Berkeley’s codification of a sanctuary law has served as an inspiration to activists and politicians to support initiatives across the nation which forbade city employees from assisting in the enforcement of federal law.

Less than a decade later, when Marxist insurgents were shooting their way into power in Central America, the sanctuary movement expanded nationwide as civil conflicts displaced hundreds of thousands of civilians from El Salvador and Guatemala. Responding to a wave of illegal immigrants entering the U.S., the federal government attempted to tighten border enforcement. However, with sheer number of illegals crossing the border undetected and facing criticism from a range of civic organizations, enforcement was met with a raft of legal challenges.

With churches and synagogues playing an active role in housing illegals, cities nationwide began passing ordinances and resolutions sketched and shaped to provide illegal immigrants from Central America protection from immigration laws. Among those cities was Chicago. Led by Mayor Harold Washington, by executive order in March 1985, Washington issued a decree denying collaboration with federal officials or federal law on immigration enforcement.

Over the next 37 years, successive mayors, Richard M. Daley, Rahm Emanuel, and Lori Lightfoot, enhanced Chicago’s “sanctuary city” stance in a series of executive orders or approval of acts by the City Council. Gestures which ranged from calling on Congress to craft and enact immigration reform or refusing to cooperate with Immigration and Customs Enforcement agents to the 2012 “Welcoming City” ordinance, most of the measures ratified appeared to sustain Chicago’s mark of moral distinction as a “sanctuary city,” until it couldn’t.

When the first buses delivering illegal immigrants from Texas arrived at Chicago’s Union Station on the evening of August 31, 2022, a shocked Mayor Lightfoot responded by describing Chicago as a "welcoming city" with its moral foundations intact. Shifting quickly with overwrought indignation, Lightfoot then indicted Texas Governor Greg Abbott guilty of a moral failing:

“Shame on Governor Abbott. What he is doing is immoral, unpatriotic, and it defies the values of who we are as Americans.”

A stale and unimaginative platitude, Lightfoot continued to lament the depth of the immigrants’ plight, insisting Chicago was “ready and prepared” to manage the influx, but hinted with apprehension the relocation of illegal immigrants to Chicago “cannot continue” and a “better way” must be found to resettle migrants.

One day later while flanked by immigration activists and lawmakers at a news conference, Lightfoot accused Abbott of creating a crisis for political purposes. Preening for her like-minded audience, the mayor then repeated her denunciations of Abbott, declaring Texas' governor to be “a man without any morals, humanity or shame.” Predictably, Lightfoot then labeled Abbott’s practice of expulsion of immigrants from Texas “racist and xenophobic” and, oddly, squeezed in a sharp criticism of Texas’ restrictions on abortion.

Moments later, when quizzed by media over whether conditions for the illegal immigrants would be more favorable in Chicago than Texas, Lightfoot grinned and stated exuberantly: “I’m happy to take and drain Texas of all its residents.” The mayor later said she would be willing to “rent the buses” to bring immigrants to Chicago.

Yet as more illegals arrived from Texas in the days following, Mayor Lightfoot’s righteous, pious mood quickly shifted to a mood of panic. No longer the masterpiece of dignity and composure, Lightfoot engaged in hysterical denunciations of Governor Abbott as “unpatriotic” and, expressing alarm, issued a plea for assistance from local civic organizations. Lightfoot then continued with a resounding rebuke of Abbott for declining to “coordinate” with Chicago officials prior to sending the immigrants north to Illinois.

Days later, in a twist worthy of a television drama, it was learned Lightfoot had quietly directed dozens of immigrant arrivals to suburban Burr Ridge. Lightfoot did so without giving advance notice to Burr Ridge officials.

As the days passed and the number of migrants arriving from Texas continued to flow in, Mayor Lightfoot enlisted the support of Governor J.B. Pritzker, who issued a disaster proclamation over what was at the time approximately 500 migrants moved from Texas. Standing side by side with Governor Pritzker at a September 15th press conference in Chicago, Lightfoot was determined to elevate her grudge against Governor Abbott. A woman with a notoriously furious temper, Lightfoot continued to upbraid Abbott as a racist and whipped herself into a frenzy as she implored for federal assistance.

If a migrant crisis was created in Chicago, Mayor Lightfoot must shoulder much of the blame

Mayor Lightfoot celebrated Chicago’s standing as a sanctuary city until it became a problem. A victim of her own arrogance, from the moment she was sworn in as mayor, Ms. Lightfoot forcefully supported Chicago’s “sanctuary city” policy. As mayor, Lightfoot signed declarations which inaugurated one of the most aggressive “sanctuary” policies in the country by ending all cooperation with federal immigration authorities. However, when the model was tested with the arrival of illegal immigrants from Texas, Lightfoot learned it created a problem beyond her ability to solve.

Of the many lessons to be learned from Governor Abbott sending migrants to Chicago, the most obvious is the “sanctuary city” policy is not manageable. While the sanctuary stance makes perfect sense for a deep-blue city such as Chicago, its strengthening by Lightfoot could lead to a repeat of conditions which allowed a five-time deportee, Francisco Sanchez, who murdered Kate Steinle in San Francisco in 2015. While Mayor Lightfoot and pro-immigrant activists have either ignored this possibility or dismissed it as conservatives whipping up xenophobic sentiments, the sanctuary model does court danger and it does thumb Chicago’s nose at the law.

In addition to the unlawfulness of sanctuary cities, for Chicago to embrace asylum for illegal immigrants reveals Chicago Democrats and progressive political activists are in thrall to immigrant and activist groups. Although part of the sanctuary policy is inspired by a genuine sympathy for the dilemma immigrants face, the undue influence exerted on Chicago’s lawmakers by activists is furthermore motivated by the attitude immigration laws should not be so much changed but ignored altogether.

As well, though Lightfoot’s lasting commitment to sanctuary policy and her fierce response to Governor Abbott is driven by progressive social priorities, there is a political element to Lightfoot’s response. A woman in the midst of an uphill battle to be returned to office, to win reelection, it is critical Lightfoot maintain immigrant support.

When Abbott bused migrants to Chicago, Mayor Lightfoot was finally forced to confront the real-world consequences of a flawed policy. Finding herself on the wrong side of the law, instead of accepting blame, Lightfoot threw a tantrum, demonstrated her taste for insult, and revealed, once again, she cannot manage a crisis.

While the origin of Chicago’s migrant crisis is a result of the Biden White House’s deliberate failure to secure the border and congressional inaction on immigration reform, Mayor Lightfoot is chiefly to blame for what occurred in Chicago. If President Biden and congressional Democrats continue to resist meaningful immigration reform, immigrants will continue to cross the border illegally, and eventually require permanent placement.

If Ms. Lightfoot insists on creating a haven for migrants in Chicago and continues to support the policies espoused by the Biden administration, then the placement of migrants should not be a matter of convenience for the mayor of deep-blue Chicago.