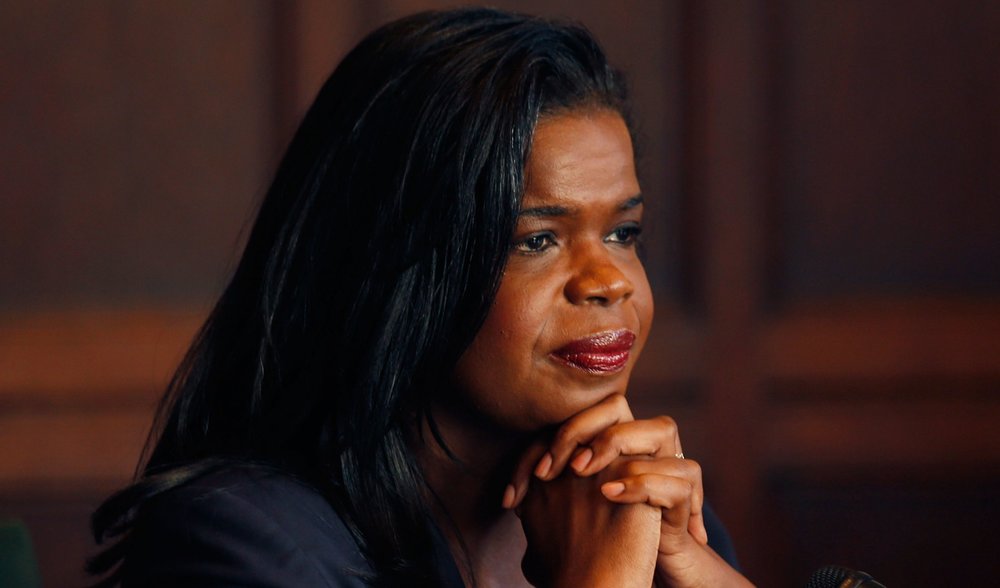 Laughter is a brilliant form of subversion.

Struggling to contain raw inner monologue, Cook County State’s Attorney Kim Foxx chuckled, briefly halted, and then replied: “I can’t separate it.” A response to a query from WBEZ Morning Shift interlocutor Tony Sarabia over how her upbringing influences her work as the county’s top prosecutor, Foxx’s first impulse was to chortle. An unsurprising answer from Ms. Foxx, her comeback only revealed no gap exists between her inner and outer life. One of several comments delivered during a November 8 appearance on WBEZ aimed at appraising her first two years in office, the gabfest between Foxx and Sarabia quickly transformed into one of the most transparently-planned Left-wing beatification campaigns in recent memory. A pro-Foxx propaganda shop, WBEZ specializes in peddling the dreary side of Chicago on which Foxx’s 2016 campaign was predicated: This is to say, pessimistic news about the Chicago Police Department.

Still celebrating Foxx’s election victory, host Sarabia provided a passably manly shoulder to cry on as Foxx spent 15 minutes alternatively lamenting Chicago’s system of justice prior to her election and smugly proclaiming her achievements as county prosecutor. A careful distillation of remarks offered on previous appearances on WBEZ, Foxx began her reminiscing with a hearty self-congratulation by bugling the latest batch of convicted felons her office turned loose to Chicago’s streets, bringing the total number of vacated convictions tied to disgraced ex-police officer Ronald Watts to 25.

Moving on, Foxx’s handwringing began as she referred to Chicago as the “false confession capital of America,” and, predictably, mentioned police misconduct, Jon Burge, and lawsuits lodged against police officers. Cheering up a bit, Foxx spoke glowingly of her Conviction Integrity Unit’s association with the Defense Bar, revealed to her surprise the city is confronted with an undue amount of retail theft, and outlined steps her office took to concentrate on gun crime. Nearing the end of the pair catching up, as Sarabia nudged her to elaborate on the bearing her rearing in a low-income community has had on her career, Foxx clutched her pearls and described the neighborhood in which she lived in her youth as stricken with violence.

Remarks worthy of attention, Ms. Foxx’s radio appearance on WBEZ gingerly exposed her lingering animus with Chicago police officers. Although Ms. Foxx never explicitly stated Chicago police were responsible for grotesque actions against residents in the community in which she was raised, it was explicitly implied with the assistance of laughter when responding to Sarabia’s final question over what sways her stance in office. An imprint fundamentally woven into her conscience by the very loved ones of whom she tenderly spoke, the distorted and pernicious notion Chicago police officers are brute devils with an excessive capacity for savagery and oppression and the purpose of assertive, vigilant policing intends to inflict sadistic harm on minority groups is a narrative which Foxx confessed she cannot escape.

Entering office in the shadow of the death of Laquan McDonald vowing to soothe the harder edges of the criminal justice system, Foxx has for two years labored for under the delusion she led a soft but glorious revolution which toppled Anita Alvarez’s corrupt legal dictatorship. Daggers drawn, Foxx has essentially consecrated herself a one-woman “justice tribunal” of which she is the judge, jury and executioner. On a feverish mission to sniff out supposed evidences of unfairness everywhere and find redress for past errors, injustices or excesses on the part of the police, Foxx cobbled together a new approach to the prosecution of criminals. Although Foxx has referred to the new anti-crime prescriptions as “holistic,” underneath the veneer of her fresh objectivity in the prosecution of criminals lay a slapdash pastiche of crackpot legal concepts akin to the mollycoddling of criminals and marking Chicago police officers for disgrace.

An appearance on WBEZ offering a powerful insight into how Foxx operates, what was remarkable is precisely what the county’s chief prosecutor chose not say to Sarabia. While crowing over raising the threshold for felony retail theft from $500 to $1,000, Foxx failed to mention her office placed the absurd caveat ten prior convictions would be required for Cook County to pursue a felony charge for the crime of retail theft. Hardly a measure to curb recidivism, Foxx also declined to reveal her prime motivation for the change: It allows gun crime to eclipse retail theft as the leading felony prosecuted in Cook County, whereby Foxx can burnish her image and credibly establish herself as a strong “anti-gun” crusader. Foxx similarly refused to discuss her relentless support for legislation which called for the expungement of juvenile criminal records. An unforgivable act, the obliteration of juvenile records eliminated one of the most effective police tools to locate suspected criminals. In Ms. Foxx’s contorted universe, minors are not violent criminals, but tragically-misguided youth held hostage by an oppressive justice system. Additionally, Foxx concealed the fact since arriving in office she has carefully recruited assistants who apprenticed with some of Chicago’s most-noted anti-police law firms.

More troubling than her pampering of criminals is Foxx’s brooding preoccupation with reviving the past. A woman who has for decades nursed a cutting grievance with the Chicago Police Department, Foxx’s methods to achieve her own special brand of fairness hinge not on the vigorous prosecution of the accused, ensuring felons remain behind bars, or assisting police, but on burrowing through the files to undo the work of previous police investigations and criminal court decisions. A chore accomplished by her office aggressively re-evaluating and vacating convictions of violent felons, a proportion of Foxx’s noxious form of justice rests on naively accepting as truth unconvincing claims of police brutality and torture, or the cock-and-bull stories from hardened offenders despairingly asserting their innocence. While touting the release of over two dozen felons connected to Ronald Watts on WBEZ, Foxx neglected to mention those convicted through their link to Watts held criminal pasts and were serving well-deserved sentences. Moreover, Foxx dismissed the occasion on air to discuss prosecutors in her office publicly acknowledging two men accused of a heinous double homicide were in all probability guilty of the crime, but were freed principally because of the discredited testimony of the lead officer in the case, and not exculpatory evidence unearthed by her office.

Everyone has a loyalty somewhere, and Foxx’s is to the anti-police Left.

If there is any lesson to be learned from Ms. Foxx’s appearance on WBEZ it is her “holistic” methods as state’s attorney are not a policy, but an excuse to dismantle Chicago’s justice system and bring the Chicago Police Department to its knees.

Campaigning on the platform of “restoring credibility in Cook County’s criminal justice system,” Foxx entered office convinced she was uniquely suited to the position. Since assuming her duties, Foxx has toiled furiously behind a legal curtain with the object of connecting the dots to the past. In Ms. Foxx’s bizarro world, the Chicago Police Department and Cook County courts are historically tainted and incapable of administering justice because both consciously ignore conditions in which justice could be fulfilled. Had Ms. Foxx simply stated errors had been made and offered gestures of restitution, a remedy would have been realized. Foxx, however, has gone much further to imply widespread corruption and bias ascend over modern policing and the Chicago Police Department is liable for a smattering of excesses or honest mistakes committed by men and women of a past age. A mock prosecutor, Foxx’s obsession with returning to the past has become all-consuming, but serves one main purpose: To re-invent the Cook County State’s Attorney’s office to serve vague and ill-defined social-justice concerns under an aggrieved “holistic” ethos. To achieve the subjective version of equality and egalitarianism of which she aspires, Foxx is warmly embracing collective retribution.

An insurgent offensive against law and order, under Foxx’s “holistically re-formed” prosecutor’s office, criminal behavior is re-defined, incarceration is discarded in favor of schoolmarmish slaps on the wrist, consequences to crime are virtually nonexistent, and the authority of her office is recklessly misused to achieve personal, parochial social-justice objectives. Most important under Foxx’s “re-formed” prosecutor’s office, members of the Chicago Police Department are to be publicly scourged by means of reversing their previous work. An avenger masquerading as a law-enforcement official, Ms. Foxx insists only through a public humiliation can the Chicago Police Department be cleansed and revived.

A deception on the matter of crime performed on Chicago residents, Foxx’s “holistic” reform hobbyhorse will allow her to pose as a forward-thinking public official, avoid her responsibility to prosecute criminals, become a social-justice heroine, and indulge both her far-Left supporters and anti-police base. Moreover, this ruse will let Ms. Foxx sit with her WBEZ media enablers and tell soothing stories about her accomplishments and earn effusive praise from her cheerleaders at the Chicago Tribune and Chicago Sun Times while Chicago turns into a charnel house.

All of this, of course, is making it virtually impossible for Chicago police to cope with Chicago’s growth in crime and encourages lawbreakers to flout the law at will. Unfortunately, while Foxx is infatuated with pursuing vendettas, she fails to articulate to the public how any alleged past error, injustice or excess reflects on the 12,000 police officers serving the city today, how the past is rectified through the release of felons from imprisonment, or how Chicago is becoming materially safer in her term. Sadly, the sum of Foxx’s record as Cook County prosecutor demonstrates her priorities and preferences are arranging a sort-of détente with criminals, retributive justice, and not penalizing criminals as the office demands. By refusing to view the Chicago Police Department through any prism but her own prejudices, Ms. Foxx is fanning anti-police flames, widening the abyss between police and the public, and creating a law-free zone in the very marginalized communities she purports to help.