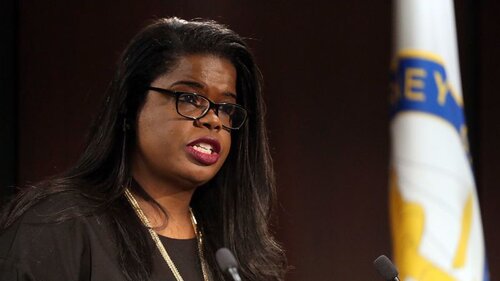 Digital ad kicking off re-election bid a study in victimology.

For Chicago residents, good news over the Windy City’s crime-ridden streets is often in short supply. Although denizens awoke on November 18 to the familiar noise 27 people were shot, one fatally, over the previous weekend, the revelation Chicago experienced a 28-hour period between November 17–19 without a shooting briefly induced high spirits among the general public. However, it did not take long for grim headlines to return; this time, the bearer of the unwelcome news was Kim Foxx, who took to Twitter November 19 to announce her bid to extend her nightmarish term as Cook County State’s Attorney beyond 2020.

While it is well known Foxx’s tenure in office is deficient on achievements, it is also generally understood her greatest liability is the Jussie Smollett fiasco. A scandal of her own making, with efforts at damage control collapsing and unable to escape the shackles of the ridiculous episode, Foxx has spent the last six months rarely emerging from her lair on Washington Street and dodging the media to no great end. Although months have passed since Foxx has done anything so egregiously stupid it dominated the front pages, Cook County’s laughably incompetent prosecutor returned to the public sphere on Tuesday to get her re-election bid off the ground with a digital campaign video.

A short film brimming with sentimentality, galvanizing slogans, a whole catalog of accusations and insinuations, and dominated by Progressive themes of “injustice” and “inequity,” Foxx opened her campaign video to swelling piano music with her driving a car in a light snow. Her voice grating on the ear, Foxx dreamily reminiscences over her upbringing by shining a light, again, on the hardships she faced in the crime-infested Cabrini-Green Homes. Conditions of her past Foxx has expressed unreservedly for years, from her palette, Foxx paints a portrait of her youth in public housing living in fear of police, overcoming racism, enduring poverty, and surviving a sexual assault. Visual junk food for Foxx, the montage depicts public housing projects as being overpoliced and, to taint Chicago police with the patina of criminality, includes a grainy re-creation of uniformed white men resembling Chicago police officers randomly hauling off minority residents of Cabrini to the nearest jail. Slowly and laboriously reaching contemporary Chicago, Foxx describes how the projects were razed, but Chicago police officers’ passion for brutality, violence, and spite for minorities lingered. Unsurprisingly, Foxx recites the names Jon Burge and Laquan McDonald as modern-era emblems of police abuse and random cruelty.

Resuming her narration a bit awkwardly but with a steely resolve, Foxx carries on by groaning over the burdens of the job, bellyaches at her critics, and bemoans one man and two organizations which she suggests hover menacingly in the background, President Trump, the National Rifle Association (NRA), and the Fraternal Order of Police (FOP). Artless comments, Foxx’s political ad reaches an absurd zenith when, in a long overdue gesture and in a very Rahm Emanuel-esque manner, she finally acknowledges her blundering over the special treatment her office accorded to B-actor Jussie Smollett. Staring into the camera with a blank face, Foxx numbingly asserts: “Truth is, I didn’t handle it well. I own that.” Only a partial admission of failure in office, Foxx continued with an assurance the Smollett slip-up had obligated her to broaden her reform efforts to “do better.” To the surprise of absolutely no one, Foxx declined to offer any specific remedy.

Following her vow to impose reform on herself for the Smollett flop, Foxx claims her critics are not only dedicated to thwarting progress, but determined revanchists. A statement delivered without a shred of evidence, Foxx carries on, and to uplifting music accompanied by misleading statistics and flashing headlines from her cheerleaders in Chicago media attesting to her good deeds, contends Chicago is flourishing under her watch.

Foxx’s re-election bid is off to a disastrous start.

While there are many ways to interpret the meaning of this digital ad, one fair and unbiased translation is Foxx is tendering a “poor-me” defense to inflame her base. Other logical readings of this ad could judge it a farrago of nonsense contravened by common sense, an early Christmas gift to her gullible supporters, subtle malice Foxx bears with the FOP for calling on her to tender her resignation or perhaps a recruiting tool for fringe group Assata’s Daughters. While viewers are at liberty to make their own assumptions, the most-coherent rendering of Foxx’s campaign ad is it serves two purposes. First, it enabled Foxx to engage in a hollow and self-indulgent paroxysm of rage in which she strikes the pose of a victim. Second, it is a vehicle for Foxx to mount a barely disguised campaign of vilification targeting the boogeymen of Chicago’s Progressive movement: The FOP, the NRA, President Trump, and, predictably, Chicago police officers.

Preposterous and patronizing nonsense, while victimhood as a cardinal virtue of politics may be marketing genius for some embattled officeholders, it is not a durable model for Foxx. A demagogue in the classic mold, Foxx thoughtlessly distorts the truth in this ad to play on the fears of her followers, largely by promoting nauseating historical legend to become accepted fact. By harnessing this shamefully inaccurate narrative and demonizing those who dare offer legitimate criticism of her actions in office, Foxx is deceiving her supporters into believing Chicago is racist, depraved, and both the FOP and the Chicago Police Department are secret societies enshrined to maintain intolerance. At her best when she plays victim, in Foxx’s warped mind, she is an eternal casualty, a victim of public housing, which, despite its flaws, provided shelter for both her and her family. In Foxx’s distorted world, she is a victim of the NRA, which, unlike her, believes gun crime is defeated by stopping criminals, not attacking gun ownership. In Foxx’s unhinged brain, she is a victim of President Trump, who, unlike her, believes criminal behavior, violent or non-violent, must be met with consequences. In Foxx’s conspiratorial mind, she is a victim of the FOP, which, unlike her, supports law enforcement. Inside Foxx’s head, she is a victim of Chicago police officers, who unlike her, labor tirelessly to keep Chicago’s streets free of violent criminals.

Apart from Foxx wrapping victimhood around herself, perhaps what is most galling about this campaign ad is the fact Foxx refused to fully admit error in the Jussie Smollett case. A matter in which the scummy maneuverings of an Obama surrogate and favoritism played a significant role, Foxx dismissed the opportunity in the campaign ad for sober reflection and to fully admit her missteps.

While it is entirely understandable elected officials loathe to publicly concede error, a first step in correcting a mistake and re-gaining public trust is fully admitting error. Although Foxx’s lackluster and often inept political skills are explanations for her refusal to admit a wrong in full, if there is one personal feature we have learned about Ms. Foxx in the past three years, it is the certainty she is a woman who is wholly unprepared to concede error anywhere in office. While Foxx’s digital ad allowed her to approach the margins of admitting error, her statements “I didn’t handle it well” and “I own it” fell short of a full confession for her false step. Though publicly admitting a lapse in judgement may be red meat to critics, Foxx’ refusal to acknowledge error over Smollett reveals herself as a woman with difficulty with examining her conduct in office, selfishly devoted to self-preservation, inclined to blame others, and difficulty with the realization criticism of her missteps are to be expected for any public official. Similarly, Foxx has not learned an elected official cannot expect to maintain any degree of respectability or retain public confidence if, in a fleeting moment, she neared a boundary of admitting error and in the balance of her campaign ad heaps scorn and blame on critics and declare she is the victim of a secular inquisition led by the NRA, the FOP, the White House, and police officers.

Speaking more broadly, Foxx’s refusal to recognize her faults has caused Chicago to become less safe. A woman who cannot admit, or even conceive, she is capable of erring, while serving as prosecutor, Foxx has stopped treating crime as an offense deserving relevant observation and impartiality. Instead of crime as an infringement upon the law, Foxx views crime in abstractions and has used her office to moralize over supposed social sicknesses in which criminal offenders are casualties. A woman who is not given to acknowledging mistakes or second-guessing herself, despite evidence substantiating her policies are deeply flawed, Foxx remains unaltered in her politics, and stubbornly refuses to shift tack on policy, strategy or principle.

What Foxx and her campaign team produced was, pure and simple, political smut. While Foxx may benefit temporarily from waxing conspiratorial and declaring herself the victim of a wicked plot, her campaign video reveals much about how she intends to direct her re-election bid. A video carefully arranged to trigger deep and powerful emotions among voters, by portraying herself as a truth-teller harried by malevolent forces and making deliberately provocative claims about responsible critics of her conduct in office, Foxx is delivering a potent message she intends to ply every device associated with gutter politics to retain power. That these crude tactics contribute to a climate of mistrust with police and promote an atmosphere in which opponents of law and order prevail is of little concern to Foxx.

A woman of staggering incompetence, if Kim Foxx is a victim, she is only a victim of her arrogance.