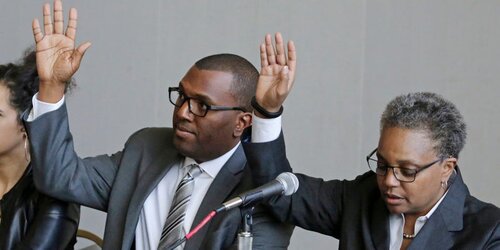 In a compelling sign of the desperate measures police unions are taking to preserve their rights, the union representing the interests of police officers serving with the Metropolitan Police Department of the District of Columbia, the D.C. Union, has filed a lawsuit in federal court claiming that recent police reform laws enacted by the District of Columbia are unconstitutional.

The legislation enacted by lawmakers in the nation’s capital made in the aftermath of George Floyd’s death in Minneapolis undermines disciplinary rights of officers negotiated in their union contract. No other union in the city has had its disciplinary rights challenged by the city, the lawsuit alleges. As such, the police union, which called the law “catastrophic,” is arbitrarily and unconstitutionally being deprived of its rights.

Filed on behalf of officers on August 5 against Mayor Muriel Bowser and Attorney General for the District of Columbia Karl A. Racine, part of the legal brief read:

“Significantly, there are approximately 40 four other labor unions that represent employees of the District of Columbia government. Each of these labor unions retained the right to negotiate with management concerning the discipline of its members and were excluded from the impact of the act…

Through the act, the district has distinguished and separated sworn law enforcement personnel into a new, distinct class, separating them from every other district government employee for the sole purpose of discriminating against a disfavored class stripping them of their rights. As such the district has created a law that provides for the dissimilar treatment of district government employees who are similarly situated.”

Only one example of how lawmakers in urban areas have targeted police throughout the country, the imposition of new policies, laws, and regulations that undermine the rights of police officers in the wake of the George Floyd death, has occurred before the entire video of the Floyd’s arrest had been released.

Chicago, in particular, has been a virtual laboratory in the development of anti-police measures and laws, largely enabled by the Department of Justice under President Obama. In a striking irony, the Fraternal Order of Police, Lodge 7, under former President Kevin Graham, decided not to fight a bizarre consent decree in federal court.  At a critical moment, Graham claimed contesting the consent decree would put the union contract at risk and the then-president of the FOP convinced enough board members to keep the union out of federal court until it was too late for the union to mount a challenge to the decree.

The decision to avoid challenging consent decree foisted on the Chicago Police Department nixed the opportunity for the union to bring forth much evidence that the anti-police movement is largely a fraud and lead the entire country in fighting the anti-police movement nationwide and preserve the ability of police to protect the public. Since the advent of the consent decree and other measures curbing police authority, crime rates and shootings in Chicago have skyrocketed.

Now, as the Washington, D.C. case demonstrates, police unions are being forced into federal court to protect their very existence.

Since police unions throughout the country are facing similar laws and policies undermining the collective bargaining rights of their members, it may be time for the unions to implement a national monitoring of such policies and laws coupled with a coordinated strategy to combat them. Without a national strategy, police unions may very well be outflanked by the anti-police movement, which holds vast power over elected officials, the Democratic Party, the media, and academics.