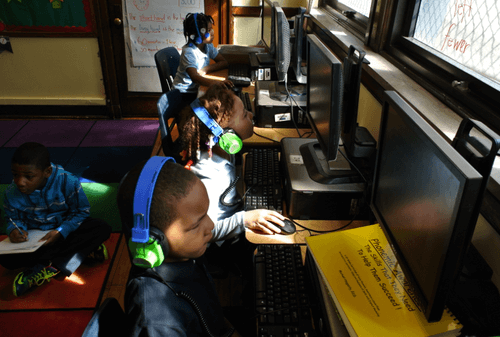 Perhaps a return to pen and paper should be considered.

In the space of a few days pupils enrolled in the Chicago Public Schools (CPS) were greeted with two scraps of news concerning their academic careers and their eventual return to the classroom.  On May 8, Mayor Lightfoot announced she intends to see the CPS resume classes in the fall of 2020.  Days earlier, the CPS released a plan to grade students for the spring semester.  Taking into consideration the impossibility of assigning a traditional letter grade amid the COVID-19 pandemic, under new guidance the CPS will fall back on a pass/incomplete means for the second semester of the school year.  A method in which a pass or an incomplete is assigned, under the CPS the temporary policy, no student will earn a failing grade and the grade point average (GPA) will remain unaffected.

Although the CPS trumpeted the plan as an “equity-focused,” it drew criticism from both the Chicago Teachers Union (CTU) and some parents who cited the malevolent specter of structural inequality over the availability of computers or the Web to students.  While there is some legitimacy to the CPS’ grievance, if we explore a little further, we may learn technology in our classrooms is overused and its excessive use may be hurting students rather than enhancing learning.

The shift to combine technology with traditional methods in education could be one of the most significant occurrences we may ever witness.  Technology in the classroom exposes our students to vast resources of information, using technology in the classroom is teaching an essential life skill, it can accelerate learning, and the use of technology can make learning more enjoyable for the student.  From a classroom instructor’s perspective, technology has similar advantages.  For the educator, technology allows experimentation in pedagogy, supports wider participation among students, and it can automate an educator’s tedious duties, particularly the need for a timely response with parents and students.

Though we live in a digital world, technology can be a culprit and can hinder learning.  While there is no denying technology is a precious instructional practice which does indeed boost learning, there are foibles to digital devices in the classroom.  According to growing research, the crucial skills such as the ability to empathize and critically analyze texts may be compromised by the shift to reading text on digital devices.  Exploration into the overutilization of technology has also revealed digital devices are wearing away at creativity among students and promoting laziness, which diverts our young learners from more scholarly pursuits.  In addition to draining motivation, technology in the classroom is increasingly exposing our students to a profusion of misinformation available on the Web.  Today, virtually anything can be posted on the Web.  The availability of information on the Internet is virtually limitless, and some of the knowledge children glean from digital devices is harmful.  A network far too vast and varied to effectively monitor, although schools do restrict websites, clickbait drawing impressionable students to view bias, ignorance, lies, and indecent material generated by eccentrics and lunatics remains a grave concern.  A unique challenge to educators, the toxic distillation of student curiosity and temptation mixed with fictions circulating on the Web presents a special challenge to over what is truth and a piece of misinformation or obscenity should require the attention of administrators, educators, and parents alike.

Apart from fantasies, falsehoods, and lewd material available on the Web, digital devices have become outright distractions and can foster academic dishonesty.  Every day brings an increasing number of stories over how use of digital devices is growing from habit to dependency in the everyday lives of most Americans.  Naturally, this carries over to classrooms.  While technology aids in learning, it has a seductive side which lures students from remaining on task in an academic environment.  Whether it be a high school student viewing Instagram, responding to an e-mail, signing in on Facebook or a third grader discovering they can draw bright yellow lines on Adobe Illustrator, computers are enabling students to shun classroom instruction.  Though an alert educator can gently re-engage an inattentive student, academic dishonesty poses a larger problem.  Decades ago, school administrators once debated whether certain calculators should be permitted in the class, as these algebra math calculators essentially solved complex mathematical problems presented to students.  The same is true for technology in classrooms which often provides applications or other tools to deliver swift answers for problems which a student should be relying on critical thinking to resolve.  Furthermore, technology is encouraging academic dishonesty by virtue of a student copying and pasting material acquired online for the completion of homework assignments.  While academic dishonesty is hardly a new development, technology has only deepened the problem in schools, and the act of lifting such material without citing the source is plagiarism.  Plagiarism is a criminal offense.

Outside of technology contributing to academic dishonesty and deflecting from coursework, technology has rapidly become an end in itself rather than a learning tool.  A genuine predicament, the fact technology is overpowering our classrooms has led to the extinction of fine handwriting and devices replacing textbooks.  Though students do continue write full-length research papers and brief essays, a majority of work is submitted by means of a word processor, Word for example.  While the purpose of such essays or a research paper is a convincing, evidenced, and well-argued piece of writing over a “right” or “wrong” answer, the emphasis on technology to perform such an assignment is eroding legible penmanship.  A lost art, so too is reading a text or a workbook; technologies are replacing both.  Most important, technology is slowly replacing educators.  Today, technology is often used as an electronic workbook to drill students on rote skills.  Though research has found no evidence this technique a benefit to students, a seasoned educator knows the most fundamental way to instruct a student is interacting with pupils.

A good educator knows how to bring out the best in any student, but the way technology is being used in the classroom is harming students.  While technology has demonstrated its usefulness, our students are becoming increasingly dependent on devices to complete work rather than relying on knowledge, thinking critically, and problem-solving skills.  Though technology is a useful tool in a classroom, it should never displace the need for concentrating on reading, writing, and arithmetic.  That the CPS has allowed technology to overtake instruction of those critical skills indicates the growth of education and humanity is headed in the wrong direction.  Perhaps the CPS should return to the basics in the classroom.