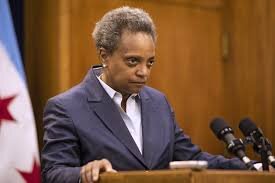 Among the most popular quarters in San Francisco, the Embarcadero is recognized for its waterfront attractions. From its numerous piers, residents and tourists can gaze at the hilly terrain surrounding the city, sip coffee at an outdoor café, enjoy the cool Bay Area breeze or catch a glimpse of the Bay Bridge or the iconic clock tower at the top of the San Francisco Ferry building. An area known for heavy pedestrian traffic, it was here, adjacent to the entrance to Pier 14 near the San Francisco Bay Trail, where 32-year-old Kate Steinle was murdered in July 2015 as she walked arm in arm with her father, Jim, and friend, Frances Williams. Rushed to San Francisco General Hospital after a bullet entered her back and pierced her aorta, Steinle was declared dead two hours after the shooting.

A crime which captured national attention, the offense was all the more enraging when it was discovered the gunman, José Inez García Zárate, was in fact an illegal immigrant who had been sought by Immigration and Customs Enforcement (ICE), but released under San Francisco’s “City and County of Refuge” and “Due Process for All” ordinances. Bywords for sanctuary city mandates, San Francisco’s “City and County of Refuge” and “Due Process for All” statutes forbid local officials from assisting federal authorities in the enforcement of immigration laws. A man who had lived a precarious life, García Zárate had been deported from the U.S. five times previously for a host of felony convictions, including possession and manufacture of narcotics and repeated unlawful entry into the U.S. At the time of his 2015 arrest for the murder of Steinle, García Zárate was on federal supervised release from a felony conviction in Texas. For a city which suffered 52 homicides in 2015, Steinle’s death in the City by the Bay at the hands of an illegal immigrant catapulted illegal immigration back into the national consciousness and compelled many to closely examine the legality and utility of sanctuary city policies.

Although many on the Left, particularly the utterly intolerant Progressive Left, portray the call for the enforcement of immigration law as a neurotic response to a fictional crisis manufactured by hysterical conservatives, the Trump Administration has placed illegal immigration at the forefront of its legislative priorities. A pressing mission almost entirely undertaken to foil the wicked activity of drug cartels and human traffickers, since taking office in January 2017, both the president and the Department of Justice (DOJ) have weighed numerous options to compel states, counties and cities to obey immigration law. From the White House, President Trump has issued executive orders, openly pondered sending illegal immigrants to sanctuary cities, proposed setting a fee for an asylum application, and withheld policing grants from sanctuary jurisdictions across the nation. However, in the search for a breakthrough to the illegal immigration conundrum, on Monday, February 10, the Department of Justice (DOJ) filed lawsuits against the State of New Jersey and King County, Washington, challenging both the Garden State’s and the Seattle area’s sanctuary laws. Describing sanctuary laws as “neither lawful nor sensible” in a speech to the National Sheriffs’ Association, Attorney General William Barr announced the legal action, which targets a New Jersey law limiting cooperation with ICE officials on illegal immigrants residing in the state and challenges a King County, Washington, executive order banning deportation flights from Boeing Field. New Jersey and King County are in violation of the law. So too is Chicago and Cook County.

Lori Lightfoot and Kim Foxx should hang on to their eyebrows.

Although Chicago was spared the DOJ’s legal petition, Barr’s gesture should send chills through Chicago politics. Sanctuary city ordinances run afoul of the law and Lightfoot is demonstrating contempt for the law. Since becoming mayor in May 2019, Lightfoot has re-affirmed her commitment to thwart compliance with law by welcoming more illegal immigrants, blocked ICE from obtaining information from the Chicago Police Department’s (CPD) databases, and joined protesters outside the ICE Chicago Field Office in September. Worse, under a bill overwhelmingly approved by the Chicago City Council in mid-January, Chicago Police are now obligated to record any request for cooperation from federal immigration officials. Additionally, the bill compels Chicago lawmakers to explore anointing public buildings “safe spaces” for illegal immigrants. A move which would bar federal agents from public facilities, the passage of the measure in Chicago’s Politburo has been advertised as a victory by opponents of law and order. Although Lightfoot has repeatedly jumped on the anti-ICE bandwagon, to her credit, the machisma mayor has resisted demands for the crafting of legislation which would sweep aside the final remaining ambiguities in the Windy City’s sanctuary city ordinances, particularly noncooperation with federal authorities’ effort to remove violent offenders from the streets.

Despite her own antagonism with the law and assertive support for a network of groups opposed to enforcing immigration law, it is similarly curious Ms. Lightfoot would endorse the re-election of Cook County’s manifestly inept prosecutor, Kim Foxx. A woman who could be credibly described as Chicago’s greatest criminal enabler, Foxx’s clinical obsession with vacating convictions is inseparable from the illegal immigration issue. With the past permanently engraved on her memory, the aggrieved Foxx has portrayed Chicago Police officers as the neighborhood bully, and the Department’s interview procedures cruelly similar to the lethal techniques applied by jailers at Tuol Sleng Prison.

Framing part of her activity while serving as prosecutor as advocacy for the wrongfully convicted, among those to whom Foxx has issued a get-out-of-jail-free card are Ricardo Rodriguez, Gabriel Solache, and Arturo Reyes. Criminal cases which implicitly reflect not all illegal immigrants to the U.S. are noble, hard-working men or women whose desire is to build a better life for themselves and their families in America, all three entered the U.S. illegally and were implicated in grisly murders in Chicago. A Spanish Cobra gang member, Ricardo Rodriguez was sentenced to 60 years and imprisoned in 1998 for the 1995 fatal shooting of Rodney Kemppainen, a homeless man tragically gunned down in a suspected gang-related drive-by shooting. After nearly two decades behind bars, on March 27, 2017, the Conviction Integrity Unit (CIU) inside Foxx’s State’s Attorney Office vacated Rodriguez’s conviction, basing grace on discredited testimony from the lead detective in the case, Reynaldo Guevara. A retired violent crimes detective, Guevara was alleged to have coerced a witness into establishing Rodriguez as Kemppainen’s killer. At the same time Rodriquez was entering prison, Gabriel Solache and Arturo Reyes were hatching a scheme to murder Jacinta and Mariano Soto and abduct their two children. Hardly exemplary citizens, in a crime so morbid it could make anyone retch, both Solache and Reyes are believed to have stabbed the couple 59 times before fleeing with the pair’s children. Convicted in 2000 for the mortifying crime, Solache was sentenced to death; Reyes received a life sentence without the possibility for parole. Although the Illinois Appellate Court upheld both convictions in 2006, over a decade later, Ms. Foxx’s office vacated both sentences in late 2017, again basing mercy on both Solache’s and Reyes’ insistence Guevara tortured them in interviews while assisting the official inquiry into the Soto murders. Foxx vacating both Reyes’ and Solache’s convictions occurred despite the fact former Foxx deputy, Eric Sussman, publicly admitted both men likely committed the crime. More appalling, in an outrage to common sense, decency, and the memory of the victims, all three loathsome figures involved in these despicable crimes have retained legal counsel and are seeking damages from Chicago.

A calamity of justice, while there is nothing wrong with experiencing compassion for those who endure hardship and face risk to settle in America, there is similarly nothing wrong with the conviction a sovereign state has the right to codify and enforce rules-based immigration policies and secure its borders.

Despite the attempt by Lightfoot to portray the illegal immigration as a moral and humanitarian issue, it is utterly irrational to stand in defiant opposition to federal law in the wake of crimes committed by three illegal immigrants. It is also foolish for the mayor to declare her support for Foxx, who has released illegal immigrants who are known killers.  While nothing can be done to return life to the victims of crime, it is a disgrace Ms. Lightfoot and Ms. Foxx are now championing sanctuary city policies, which, if not in effect 25 years ago, may have prevented the deaths of three innocent people. To preserve the memory of the Sotos and Rodney Kemppainen and to attain the higher cause of justice, Lightfoot would best serve the city she governs by renouncing Chicago’s sanctuary city stance. Should Lightfoot continue to maintain Chicago’s standing as a sanctuary for illegal immigrants, the only point gleaned from her so-called triumph on the issue is Lightfoot will now bear complete responsibility for all crimes committed by those without the legal right to remain in the U.S.