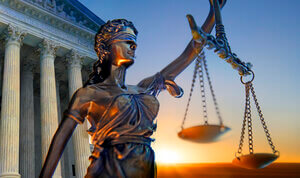 Why are the rights of Chicago Police officers denied?

In a city ostensibly committed to upholding social justice and Constitutional policing, no explanation has been provided as to why there are no prosecutions underway in connection with a riot that left some 49 Chicago police officers injured.

The officers were injured when activists attempted to tear down a statue of Christopher Columbus in Grant Park Chicago on July 17. The officers prevented the rioters from destroying the statue. For now.

What is particularly troubling about the refusal to hold the rioters accountable is the abundant video evidence that the attack was planned and included deadly weapons, such as pipes sharpened on one end that were used as projectiles. As police stood in defense of the Christopher Columbus statue, rioters hurled bricks and frozen bottles at officers and used umbrellas to conceal their identities. The entire affair bore the hallmarks of a leftist “action.”

How much more dangerous will it get for police and how fast?

The failure of the justice system to afford police officers even their basic rights as the victims of felonies or other violent crimes spells ill for a city already subsumed in violence and corruption. The silence and inaction of elected officials, including Cook County State’s Attorney Kimberly Foxx, is a sign of how much Chicago’s and the state’s progressive, anti-police political faction has permeated and taken control of the entire political machine.

However, for those willing to uphold the law and real social justice that much of the deranged youth is hysterically shouting about on streets throughout the city, pursuing the offenders in these police attacks is essential. At the very least, not doing so allows the revolutionaries know they can act without fear of the law. But there are even more reasons why these offenders should be identified and prosecuted.

Anyone even slightly familiar with Chicago’s corruption knows that Foxx has no intention to prosecute. Foxx has proven from every deed, policy, statement and action that she is on the side of the rioters and seeks to use her office to protect them.

Fine, then. Pursuing charges against these offenders can be moved to federal prosecutors, who have already demonstrated a willingness to prosecute crimes against police officers when Foxx refuses. This would put the justice system back in the hands of federal authorities without even having to use federal agents to do so.

Federal authorities would likely conduct a far more comprehensive investigation that could illuminate what most police already know: Many of these rioters are extremely dangerous, violent people with criminal intent.  For the members on the left who are still reasonable, who “have not eaten from the insane root that takes the reason prisoner” of the progressive mania sweeping the country and destroying its cities, such investigations could do well to raise the political debate from the current level of a shouting match.

What is happening in cities is a chilling sign the left is driving toward one-party rule, with Chicago the most shining example of how corrupt and violent cities become when there is no competing political party to watch over them. Chicago is a spectacular example of how wise the Founding Fathers were in constructing a political system based upon checks and balances, the political mechanism the rioters are currently trying to destroy.  The evidence reveals more and more that Chicago is the future of the country as this movement grows. Getting these cases in the federal courts is the crucial first step in pursuing equity and justice.

Pursuing charges in this case would also pave the way for the officers who were victims of crimes  file civil lawsuits against the offenders for damages, a crucial move that would provide the public with telling information about who and what organizations are possibly organizing and executing the “actions.” Isn’t it time the public knew more comprehensively who is running wild in the streets causing mayhem, and why? The media in Chicago, now wholly in the back pocket of the rioters and the elected officials like Foxx who support them, will never do so.

There are other benefits to pursuing criminal and civil legal avenues in the federal courts.

A central theme in the battle between the left and right are the accusations that the criminal justice system under Obama was politicized as a weapon against adversaries. The claim President Trump conspired with Russia in the last election is the most contentious example, with President Trump arguing that he was the victim of a conspiracy, both criminal and political.

Nevertheless, many in Chicago and in the Trump administration have also been highly critical of a consent decree imposed upon the Chicago Police Department based upon an investigation conducted by the Justice Department under Obama. That investigation lead to the consent decree, which led to the appointment of a special monitor, Maggie Hickey, whose primary function is to ensure that Constitutional policing flourishes in Chicago.

Well, what about the rights of officers attacked by criminals? Why is Hickey silent about this? Why isn’t Ms. Hickey marching into the federal courts and demanding that the police attackers be held to account? After all, if the rights of police officers are trampled into the asphalt of Chicago’s pothole filled streets, how can the police, in turn, defend the Constitutional rights of its citizens?

Hickey’s silence is another key piece of  evidence that the consent decree was indeed part of the politicization of the Department of Justice during Obama’s reign, a key strategy in vilifying the police that the deranged youth are using to justify their criminality in the name of social justice.

These rioters must be investigated, identified, and prosecuted, just like a dirty cop would be.