The Hijacking of the Illinois Governor's Office 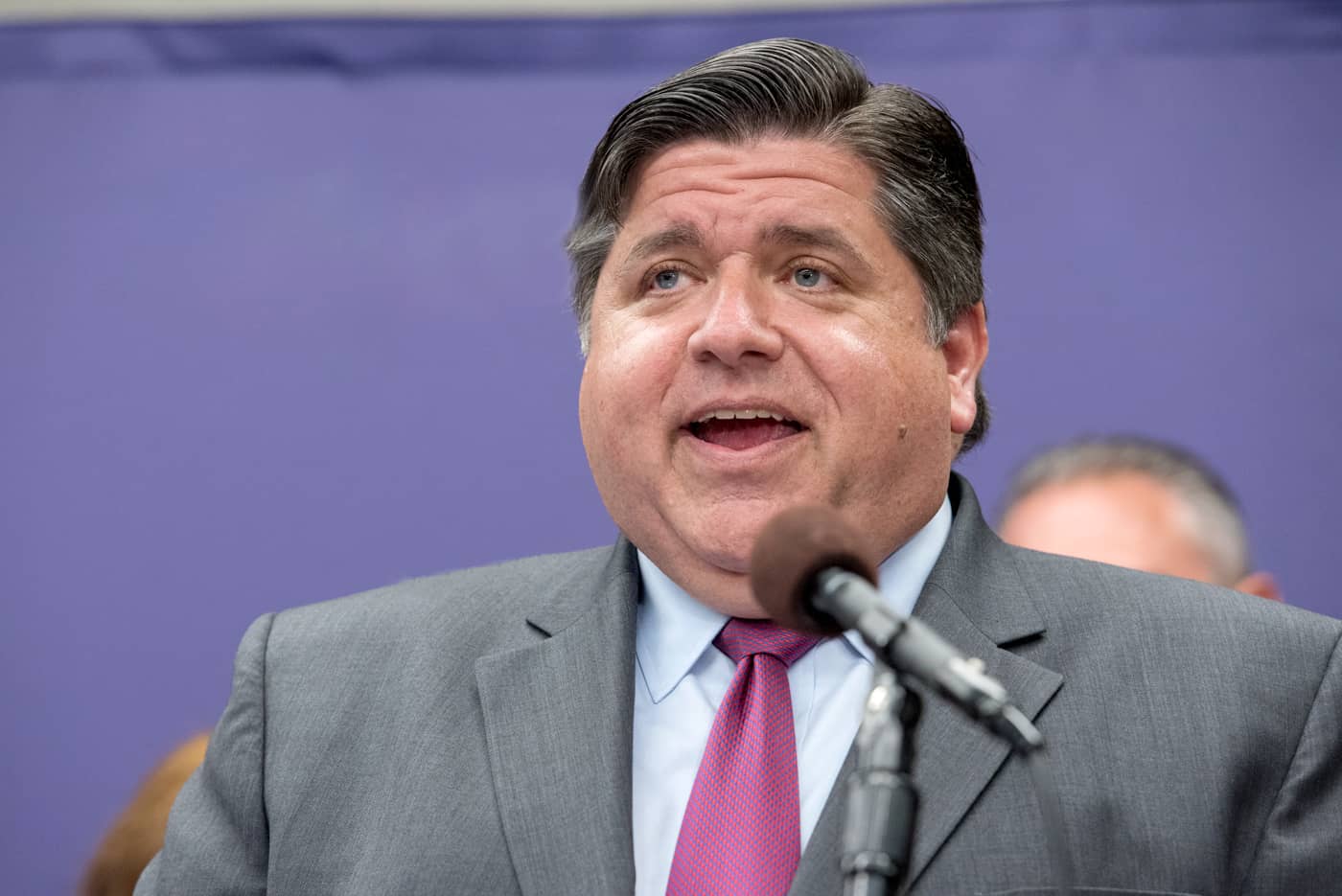 By all means, Governor Pritzker, let’s look at everything that “has occurred” in the exoneration industry's takeover of the governor's office

In an unusual challenge to Illinois Governor J.B. Pritzker, a collection of Republicans and some Democrats rejected the governor’s latest nominees to the state’s Prisoner Review Board. A state entity with extraordinary powers, the Prisoner Review Board makes recommendations on clemency, arbitrates the calculation of good time credit, and reviews cases of those who violate the terms of their parole to decide whether they should be returned to prison. The Board also determines who is released from prison.

One nominee, Eleanor Wilson, was voted down by the Illinois Senate and another, Oreal James, resigned. Both Wilson and James had voted to release two men from prison who had been convicted of killing Chicago police officers.

Faced with voter exasperation over exploding violent crime, Illinois state senators can no longer continue to rubberstamp the governor’s steady surrender to the exoneration industry. A sinister political movement that seeks to make martyrs of convicted killers, the exoneration industry has found great success casting doubt on the integrity of the criminal justice system that scrupulously investigated, prosecuted, and sentenced offenders.

The movement has made deep inroads into Illinois institutions, so much that the unusual rejection of the Democratic governor’s nominees left Pritzker huffing and puffing, and, as usual for the Illinois governor’s office, utterly deceiving the voters.

"[Republicans] take the original crime that took place, often decades and decades ago, and they just talk about the headline of that crime and don’t talk about everything else that’s occurred," Pritzker said.

Everything that has occurred, Mr. Pritzker?

A cynical, petulant and false response, the truth is that the citizens of Illinois haven't been presented with the whole story, the "everything that has occurred," narrative because the mainstream media in Chicago works very closely with the governor on behalf of the exoneration industry. The whole story is marked by a series of decisions and legislative creations clearly indicating the sellout of the governor’s office all the way through Pritzker’s dismal leadership of Illinois. Pritzker sits atop this takeover of the governor’s office like a political godfather, so used to getting his way that a legitimate rejection of his nominees generates a nasty, brutish outburst.

The governor’s office was officially hijacked in 2003 in a bipartisan coup.

In 2003, then-Governor George Ryan was facing a 21-count indictment for corruption allegations while he served as secretary of state. In a cynical, deeply corrupt attempt to resurrect his political reputation and deflect from his misconduct, Ryan, a Republican, abandoned every tenet of his party’s principles and tied his cart to the growing exoneration movement in Chicago. At the time, Ryan began to embrace the industry’s narrative; the nascent movement’s central claim was a string of convicted killers were innocent and victims of police frame ups.

In what was clearly one of the biggest confidence games in the history of the nation, Ryan attempted to recast his image from crook to statesman by releasing four convicted killers from prison. All four of the men Ryan freed had claimed they had been framed and their confessions were coerced by the big bad Chicago police. At the very center of Ryan’s decision to release these men was the exoneration of Anthony Porter four years earlier for a 1982 double murder. Amidst a media frenzy, Porter was released when another man, Alstory Simon, ostensibly confessed to the killings. The Porter exoneration became the foundation of the exoneration mythology, for here was a man who came within two days of being executed only to be transformed into a victim by a supposedly corrupt criminal justice system.

Completely undermining the state’s judicial system, Ryan released the four men with no new evidence of innocence. Ryan merely set the four free, using the imagery of the Porter case as a justification. One of the freed men was Madison Hobley, who had been accused in 1987 of setting a fire that killed seven people, including two children. By freeing Hobley, Ryan breathed life into a exoneration movement that has cost taxpayers upwards of a billion dollars in civil verdicts and settlements, initiated untold bizarre and witless police reform measures, and paved the way for the anti-police movement that would rage across the entire nation and left many cities teetering on chaos.

In 2013, Cook County State’s Attorney Anita Alvarez would review the Porter exoneration and assail the investigators at Northwestern University who came up with it. Alvarez would later set Alstory Simon free, and in doing so, turn the central exoneration upside down.

No serious review or investigation of Ryan’s actions in the release of four convicted killers was initiated by the media, now wholly in the back pocket of the exoneration industry. Nor were there any sincere attempts to hold Ryan accountable over how the governor’s office had been coopted by a sinister political faction.

Not to be outdone, Governor Pat Quinn institutionalized Ryan’s sell out of the governor’s office to the exoneration industry in two monumental ways.

First, Quinn oversaw the creation of a new state agency, the Illinois Torture inquiry and Relief Commission (TIRC). Like Ryan’s undermining of the entire judicial process, TIRC institutionalized the same undermining of the judicial system that Ryan employed in freeing four convicted murderers with no new evidence of innocence. Quinn did so by granting his appointed TIRC commissioners the authority to arbitrarily resurrect long-settled criminal convictions cases and return them to the court system for an evidentiary hearing. Faced with a decades-old case, prosecutors often declined to retry the case and the offenders went free, a process that was nothing short of a complete breakdown of the state’s judicial and political systems.

Second, Quinn made a series of decisions that proved unequivocally his office was at the service of the exoneration movement, the judicial system be damned. In the waning moments of his scandal-plagued administration, Quinn commuted the sentence of Howard Morgan, convicted of attempted murder of four police officers after a wild shootout on Chicago's West Side. Three of the officers were wounded and it took more than nine years and two trials to convict the offender. Just as Quinn had done in creating TIRC, he randomly used his executive powers to undermine the entire judicial process that led to the man’s conviction and release Morgan from prison.

Later, Morgan would go before the very same Prisoner Review Board Pritzker is ranting and raving about in an effort to obtain a pardon. Describing his view of Pritzker’s comment “everything that has occurred” in the Morgan case, one of the injured officers involved with the Morgan incident said:

"My point being: It took a considerable amount of time to become familiar with the facts of this case. And in the end, the only reasonable conclusion 12 people collectively made was a guilty verdict."

"And now, here we are 3 years later, answering to Howard Morgan’s last effort to escape all accountability of his crimes. Here we are, both sides of this process, summarizing this case into letters to the board and into a few minutes of speech at a public hearing. It hardly seems fair in my opinion, given the diligent work of the jury and judge during the trial phase. And, the fact that every legal argument Howard Morgan is making to this day, has been debated and struck down several times all the way to Illinois Supreme Court."

‍One wonders what would have happened if Pritzker’s nominees were on the Prison Review Board at the time Morgan was seeking a pardon for trying to murder four Chicago police officers. Would Morgan have gotten the recommendation from the board, then marched into federal court and filed another lawsuit that would cost the taxpayers millions the way so many other violent criminals have done?

Quinn’s release of Morgan was not the only outrage of all his final decisions as the office holder in an office he sold out to the exoneration industry. Quinn also commuted the sentence of Willie Johnson, convicted of perjury for lying in an effort to release two convicted killers for a double murder. And last, Quinn arbitrarily commuted the sentence of convicted murderer Tyrone Hood, whereupon Hood marched into federal court and filed a lawsuit against the detectives who investigated his case.

In a rare instance of the legal establishment standing up to the corruption in the Illinois governor’s office, city attorneys representing the detectives subpoenaed Quinn for a deposition to explain his decision to free Hood. Quinn vigorously fought the deposition, which is somewhat strange. If the former governor truly thought Hood was innocent, couldn’t the deposition be an opportunity to boast about his commitment to social justice and righting great wrongs? Couldn’t his deposition be a powerful step in refuting the city’s case that Hood is guilty of the murder? Yet Quinn fought the deposition tooth and nail, begging a question no one in the media ever asked, certainly not federal courts reporter at the Chicago Tribune, Jason Meisner.

In between these washouts as governor, Republican office holder Bruce Rauner made no effort to challenge the wholesale degradation of the criminal justice system initiated by his Democratic predecessors. Rauner left TIRC alone; he never confronted any of the bogus exonerations that took place before him.

And so it goes from the sell out by Ryan all the way to Pritzker, a governor’s office wholly in service of the exoneration industry and their essential function to vilify the police and make heroes or victims out of criminals. Throughout it all, the Republicans in state government have remained completely silent, proving they too are essentially cogs in a vastly corrupt political apparatus, a truth that only casts a countenance of cheap theater on their occasional standing up to Pritzker, as they did in rejecting his nominees to the Prisoner Review Board shortly before upcoming elections.

In doing so, Republicans in Springfield demonstrate an almost school-girl terror of the media, unwilling to challenge the media’s four decades of lies in service to the exoneration industry, quaking in fear lest their decisions to uphold the political and justice systems should turn the poison pens of Chicago journalists on them.

By all means, Governor Pritzker, and the quivering Republican senators, let’s “talk about everything else that’s occurred,” in the wasteland of Illinois politics.

Let’s talk about it all.