How Kim Foxx Has Exceeded the Authority of Her Office 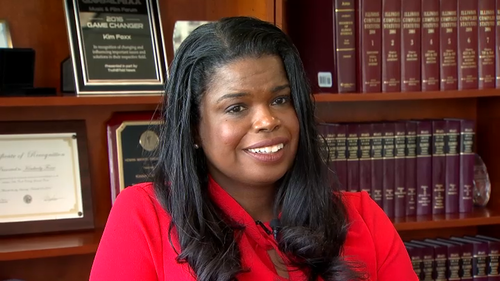 Hours after the clinking glasses, the merriment, and the mad celebrations observing the New Year fell silent, Chicago police officers with the 1st District were summoned by a 28-year-old man who said he had been the victim of an assault while a travelling on a southbound CTA Red Line train.  Responding to the victim, police quickly confronted the offender, Tyrese Parris, who re-acted to police commands by assaulting one officer and kicking another.  Despite being charged with one count of felony aggravated battery of a peace officer, two counts of resisting arrest, and two counts of battery, Parris was released after posting a measly $100 bond.  A man who obviously has learned little from previous brushes with the law, Parris’ apprehension on January 1st, was the latest in a series of arrests reaching back to May 2019.  An odyssey which began a mere eight months ago, Parris was charged with felony robbery, battery, and three counts of theft of lost or mislaid property in May 8.  Appearing in court in September for his May crimes, Parris was sentenced to two years probation under a deal which saw the unpleasant lad enter a guilty plea to a reduced charge of theft.  Two-and-a-half months later, in incidents weeks apart in December, Parris was twice delivered into the welcoming arms of Cook County prosecutors, who released him after police nabbed him for drug possession and, in the second incident, charged him with possession of burglary tools and trespassing.  Despite his probation from his September charge, Parris was released on his own recognizance.

A man whose zeal for criminal behavior never receded during intervals between arrests, the ease with which Mr. Parris was returned to the streets unfortunately encapsulates Cook County’s justice system under Chief Judge of the Circuit Court Timothy Evans, Sheriff Tom Dart, and State’s Attorney Kim Foxx.  While Dart and Evans play a critical role in the demise of law and order in Chicago, Kim Foxx is more responsible than others for the failures which have occurred. Although a prosecutor is often confronted with a disordered and troublesome county, in the three years since she became Cook County State’s Attorney, Foxx has made the condition of law and order worse, and in some cases, markedly worse.  In the course of her term, Foxx has implemented nearly every policy she envisioned as a candidate.  As a result, the cumulative effects of her policy failures have been extraordinarily damaging to Cook County.

As Cook County voters near the March 17 primary election which will decide whether Foxx is to lead the Democratic ticket, and likely return her to office for a second term as State’s Attorney , it might be helpful to dissect her political philosophy and re-appraise her policies.  If examined with some attention, it may reveal Ms. Foxx has overstepped the boundaries of her office to apply her revered “holistic” reform measures.

A woman who is fond of reminding us part of her childhood was spent living in the disorder of Chicago’s public housing, Ms. Foxx considers herself a survivor and, more importantly, a victim.  In an era where victimhood is the most advantageous standing for those searching for identity, acclaim and pity, Foxx’s sustained pose as a member of a minority group treated with indifference by the law and victimized by alleged police oppression has served her well.  In addition to her upbringing in suboptimal conditions, Foxx’s unremarkable career as an assistant state’s attorney exposed her to the ebbs and flows of the criminal justice system.  While we all carry the weight of some experience, the memories and sensations of her childhood and as an assistant state’s attorney were formative experiences which left Foxx with a deep distrust not only for those mandated to create and enforce laws, but the law itself, particularly the interminable, meandering legislative process.

Seizing on the 2014 shooting death of an armed teen, Foxx became part of a nationwide squad of Progressive prosecutors who attained public office on an avenue paved with George Soros’ dirty money and applause from fringe group Black Lives Matter.  Although posing as a reformer, Kim Foxx did not stand for office to faithfully apply the law or prosecute offenders, but rather sought office to preach a sermon, tame what she believes is the criminal justice system’s savage impulses, and both rein in and sidestep the law.  Impelled by the Progressive maxim individuals are not liable for their willful role in criminal activity, Foxx raised the threshold for the prosecution of retail theft, broadened eligibility for the felony diversion program, vacated dozens of convictions, supported an end to cash bail, and to fulfill a transparency pledge, placed crime data online for the public to view.  On gun crime particularly, Foxx has frequently opted against felony charges for gun crime or possession of an illegal gun, instead blaming the violence plaguing Chicago’s streets on a gun culture.  Simply put, to prosecute an offender for a crime involving a firearm would be an infringement upon the core Progressive axiom of victimhood, and thereby heresy to Foxx’s Progressive doctrine.

Measures which Foxx believes reversed the alleged injustices which flourished under her predecessors, Foxx’s dogma is rooted not in law but in her Progressive politics.  A political creed which holds power is concentrated in elected office, what unites Foxx’s reform policies is impatience with democratic norms and the authority and influence of law in society.  While it is not uncommon for a public official to usher in minor reform following elevation to office, the scale and scope of reform to which Foxx has committed herself has traditionally fallen under the duties entrusted to an elected state assembly.  Although Ms. Foxx can claim she is merely exercising the authority delegated to her office, her resentment and mistrust of the law has liberated her from observing customary bounds on the power of her office when she issued her reform measures.  Now commanding vast power as state’s attorney, Foxx has resisted issuing calls for sweeping statutory change in Springfield by virtue of the fact it would entail a risk her cherished reforms would face dilution in legislative proceedings and likely result in constraints imposed on her office.

The law should never be subject to the whims of human passion.

Although her failures are in plain sight, massive and multiplying, Foxx believes both she and her reforms deserve an ovation.  The problem here, of course, is Ms. Foxx is terribly wrong; in fact, Foxx is dangerously wrong.  Three years in office and aiming to be returned for a second term, a careful analysis of the impact of her reforms reveal her default disposition for mid- and low-level crimes, deferred prosecution, only elicits sneers from criminal offenders, her refusal to commit herself to prosecute retail theft has unleashed a riotous eruption in the theft of retail goods, and her support for bail reform has touched off an alarming rate of recidivism.  Furthermore, though she cannot it see under her nose, Foxx’s insistence a biased and corrupt justice system created “mass incarceration” defies compelling evidence it was in fact rising crime which rattled citizens, and the public responded by demanding criminal offenders face more punitive measures from the justice system.  Moreover, despite her over-emotional lectures regarding alleged “mass incarceration,” Foxx fails to recognize Cook County jails do not resemble the gulag, the governing principles behind incarceration are sanction and penitence, and a vast majority of those accused put behind bars were in fact guilty of crimes. While Foxx can claim with some truth sins were committed under her predecessors, an absolute majority of those sins should be attributed to incompetence rather than malevolence.  In addition to her preachy self-righteousness concerning so-called injustices of the past, Foxx trumpeting the availability of crime data to the public is virtually meaningless and she has declined to articulate precisely why it is relevant.  Most important, of all the damage Foxx has created, the facts of a startling number of Foxx’s vacated convictions did not justify any notion of clemency.

Despite her “holistic” policy a tattered and obvious failure, Foxx’s favored defense is to pretend it is the only game in town.  A woman who prefers poignant and affecting storytelling over reasoned logic, Kim Foxx has turned Cook County’s justice system into a vehicle to pursue selective justice, personal vendettas, and pietistic crusades.  By doing as much, Foxx has furnished Cook County with a hideously insufferable brand of justice which has done nothing to end a circle of violence, fear, and misery.

A woman who prefers to rule by diktat, should Kim Foxx be re-elected, look for Chicago’s Progressive martyr to take a cue from San Francisco’s newly anointed district attorney, Chesa Boudin, and to begin disregarding quality of life statutes such as the prosecution of public urination and defecation.