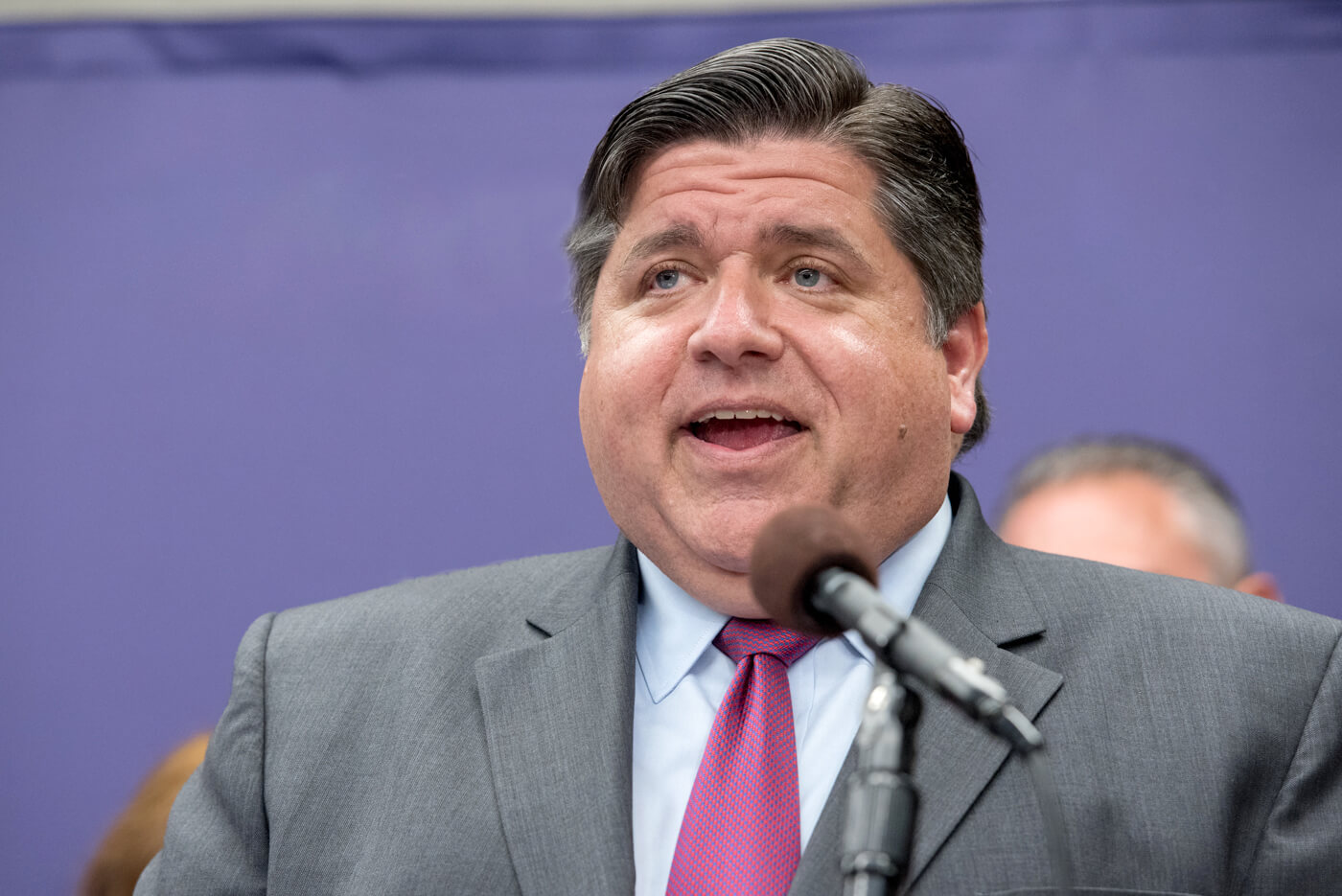 Like his predecessors, Pritzker sells out his office to radical overlords.

In 2008, Patrick Fitzgerald, who was serving as the United States Attorney for the Northern District of Illinois, initiated a criminal case against the then-governor of Illinois, Rod Blagojevich. Fitzgerald’s probe would ultimately lead to Blagojevich’s conviction and a sentence of 14 years behind bars.

The foundation of the case against him were claims that Blagojevich engaged in several pay-to-play scams while in office, including the allegation he attempted to sell off the Senate seat vacated when Barack Obama won the 2008 presidential election.

Among Chicago’s media elite and elected officials, a nauseating support for the case and lengthy sentence against Blagojevich ensued, even though anyone slightly familiar with how Chicago and Illinois politics works knows the sort of political horse-trading Blagojevich engaged in is a common political practice.

Nevertheless, Blagojevich was whisked away to prison, rescued from serving an excessive 14-year sentence only by President Trump, who released him from prison in 2020.

And the guy on the other end of the phone calls that resulted in Blagojevich going to prison? That would be none other than the current Governor of Illinois J. B. Pritzker, the political hack who just signed into law a radical anti-police bill that will effectively handcuff police throughout the state, undermine the basic rights of officers and undoubtedly give a green light to an increase in the daily carnage for which Chicago is both an enduring tragedy and twisted comedy.

The modern dynamic of Illinois governors is twofold. In one part of this dynamic, governors usurp their power by freeing criminals to cater to lawmakers who make up an anti-police faction in the Illinois General Assembly. The freeing of criminals helps bolster a false police corruption mythology and makes police officers vulnerable to false accusations. In return for the governor freeing convicted criminals, anti-police lawmakers enthusiastically throw support behind such dangerous legislation such as Pritzker’s “police reform” bill.

In the other part of this dynamic, the one-party system that dominates the state’s political system protects obedient governors and punishes the disobedient. Part of the discipline handed out to an insubordinate governor is delivered by the media and the criminal justice system, for the corruption alleged against Blagojevich pales in comparison to the corruption of other governors before and after him, corruption which never even rose to the level of an indictment, let alone an investigation by the likes of federal prosecutors such as Fitzgerald.

Nevertheless, with the signing of House Bill 3653, it’s worth reviewing the sordid sell out of the governor’s office. The value of examining what is happening is useful not only because it is spellbinding in its own right, but also because it serves as a warning to other states that regressing from a two-party system into one-party rule the way Chicago, Cook County, and Illinois has will invite severe consequences.

Consider, for example, the fact that in 2003 then-governor George Ryan freed four convicted murderers in Illinois with no new evidence of their innocence, one of whom was Madison Hobley, who was convicted of committing an arson that killed seven people. Facing his own 21-countindictment at the time, Ryan sold out his office to the anti-police movement in what might aptly be called an attempt to deflect from the growing evidence of his pay to play scams as secretary of state. Ryan’s release of these men, made in a speech before a vast collection of the anti-police attorneys, activists and their media lapdogs, was a sellout for which the city and state has paid mightily. Since then, a cottage industry has emerged that has resulted in untold lawsuits against the police totaling almost $1 billion. These lawsuits have become the foundation for a host of laws and policies that will continue to prevent police from protecting the public, including the new anti-police legislation given life with Pritzker’s signature.

Ryan’s decision had another crucial repercussion. His unconscionable betrayal of the public trust gave legitimacy to Chicago's corrupt media, for whom claiming the police coerced confessions from innocent men has built many a career.

The Department of Justice’s refusal to investigate this decision by Ryan was an initial omen. It warned that Chicago politics would come to control the entire national justice system, not the other way around, as the whole of the DOJ sat on their hands as these once convicted killers, deemed guilty by their own peers, walked free through the action of a governor about to enter prison himself.

Naturally, for his corruption indictment while serving as Secretary of State, Ryan’s punishment was nowhere near as harsh as the 14 years handed down to Blagojevich.

Not to be outdone, former Governor Pat Quinn also signified his blind allegiance to the anti-police movement.

Hours before Quinn left office after being defeated by venture capitalist Bruce Rauner, Quinn committed three acts that should have immediately drawn attention from the Department of Justice. Quinn released Howard Morgan from prison after Morgan was convicted of the attempted murder of four police officers in 2005. Three officers were wounded in the shootout. The four officers had spent more than nine years and lived through two trials before getting a conviction against Morgan, enduring a media and activist circus that accused them of everything from robbing Morgan to attempting to execute him.

At the same time Quinn let out Morgan, he commuted the sentence of Willie Johnson for perjury. Willie Johnson stepped forward in 2011 to tell a judge that he was lying in the original trial of two men convicted of shooting Johnson and two of his friends in 1992. Johnson’s friends died but Johnson survived nine gunshot wounds. Johnson’s claim that he lied at the original trial, supported by a collection of lawyers and law firms who regularly sue the police for misconduct, could free the men who shot him and his two friends.

Johnson’s recantation did not convince either the judge overseeing the case or then-Cook County State’s Attorney Anita Alvarez. They pointed to suspicious phone calls from a high-ranking gang member in prison shortly before Johnson came forward with his whopper story. The shooters remained in prison and Alvarez charged Johnson with perjury.

Nonetheless, Quinn freed Johnson from prison in the waning moments of his administration.

That’s not the end of the mess that is the Governor’s office in Illinois. Attorneys representing the City of Chicago are attacking Quinn in the federal courts for his decision to release Tyrone Hood for the 1993 murder of Marshall Morgan, Jr. The attorneys allege that media pressure, not evidence in a legal proceeding, compelled Quinn to release Hood.

"Mr. Quinn’s decision set in motion a chain of events that led directly to the reversal of Plaintiff’s convictions and these lawsuits, but the decision was not based on the discovery of any new evidence exonerating Hood…, such as DNA or eyewitness testimony excluding [him] from the crime—that evidence does not exist. Rather, it was the product of an intense media campaign by Hood’s attorneys involving local and international celebrities, NBC Chicago, Peacock Productions, the Chicago Tribune, and the New Yorker Magazine."

Ryan’s willingness to release convicted killers from death row for the most appalling crimes with no new evidence of innocence and Quinn’s last-minute opening of the prison doors for so many men convicted of the most heinous crimes, including attempted murder of police officers, reveals decades of the governor’s office owned by the anti-police movement.

Such is no surprise. Fitzgerald’s tenure as U.S. attorney in Chicago was an early sign of the politicization of the Justice Department that took full control under the Obama administration, a Justice Department willing to turn a blind eye to the most offensive and dangerous corruption while turning lesser cases, even baseless ones, into great crimes.

Can anyone say Russia hoax?

The real story of Illinois governor’s office is that the administrations have been held captive to a political faction whose primary objective is a war on the police. Pritzker’s signing the recent legislation is merely the latest chapter in this grand political sellout, justified confirmation of this chilling truth, already revealed time and again in Pritzker’s predecessors.

Can anyone say “pattern and practice?”

Anyone familiar with these truths about the governor’s administration knew Pritzker would never resist placing his signature on the legislative disgrace known as a police reform bill. In signing it, citizens can rest assured now that no matter how corrupt Pritzker’s administration turns out to be, no matter what misconduct emerges, he will likely never face an indictment, let alone a 14-year sentence for any political horse trading.

At least as long as the Department of Justice endures under President Joe Biden.

The magnitude of this corruption far surpasses the back room dealing that became the basis of Blagojevich’s criminal trial and sentencing. More and more, Blagojevich’s trial appears little more than the cheap theater of the nation’s most crooked city, county, and state, one in which the justice system is appropriated to punish mavericks who go out on their own, while even the most despicable and corrupt remain immune from prosecution.

Knowing this history of the co-opted governor’s office, the campaign to persuade Pritzker not to sign the legislation was like talking to the wind. The governors obey their anti-police overlords, no matter how much blood will run in the streets.

And they do it in the name of social justice. How many truly courageous police officers have been ruined by these political scoundrels? How many more will have their careers and reputations destroyed under this new legislation?

With a Democrat occupying the White House and every sign that the Department of Justice will return to being the agency used to destroy political enemies, the question must be asked: Is Illinois the future of America?