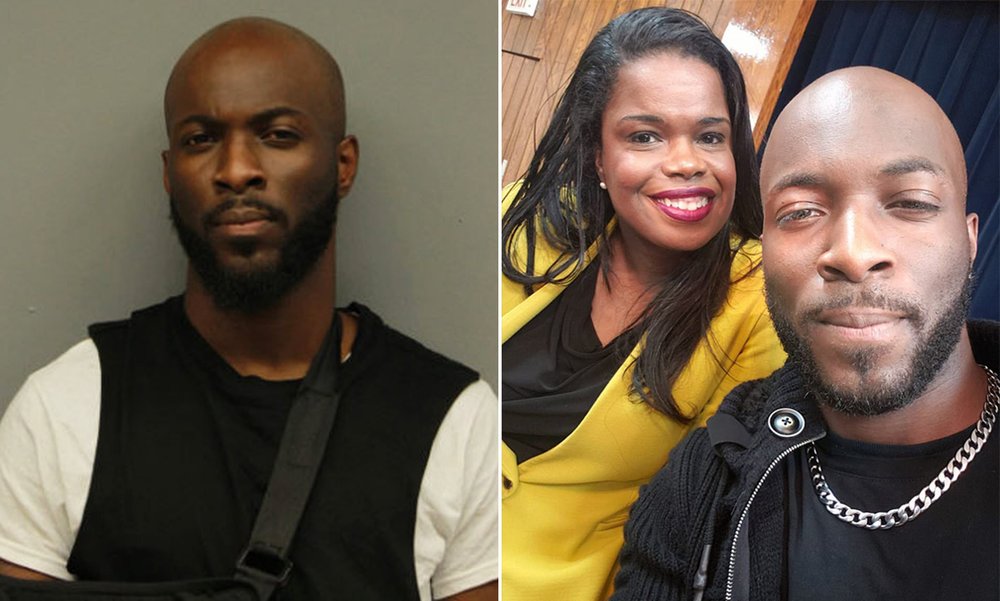 Not long ago, in Chicago, there was a time when a public official’s association with unsavory individuals or groups courted controversy, drew scathing and well-deserved condemnation from journalists, and stirred public outrage. However, under Cook County State’s Attorney Kim Foxx, the strict observation of the sacrosanct boundary which separates public officials and elected lawmakers from sordid figures has been discarded in favor of Foxx melding with a dangerous syndicalist society, the Windy City’s anti-police movement. While serving as Cook County’s top prosecutor, Ms. Foxx’s partnership with opponents to law and order is thriving, undisguised, seamless, and reciprocal. More troubling, Ms. Foxx’s failure to heed this once-sacred line is also frightening.

By now, most of Chicago’s residents are familiar with the April 6 gathering convened at Rainbow/PUSH. An assembly summoned by the Reverend Jesse Jackson under the pretense of a press conference to show support for the embattled Foxx over her bungling of the Jussie Smollett case, Foxx took barely three questions near the conclusion of the engagement before being hustled from the stage. A meeting which was quickly revealed to be scarcely more than a damage-control exercise, Foxx stood motionless as a number of supposed clergy and elected officials were joined by a comical bunch of misfits and anti-police rebels engaged in ritual condemnation of Chicago police and the Fraternal Order of Police (FOP). A clown-like event, following the grievance brigade of community activists maligning police, Foxx took the rostrum and demonstrated her method for defusing the budding scandal by dismissing any soul-searching for her missteps and merely finger-pointed and lashed out at her critics. Her temper flashing, Foxx later implicitly implied racism was behind the FOP’s call for her to resign.

However, in the midst of the madcap scene, Foxx shared a platform with two men, Ja’Mal Green and Jedidiah Brown, both of whom form an axis and are well known to police. The Scut Farkus and Grover Dill of Chicago’s anti-police industry, both Green’s and Brown’s presence at Rainbow/PUSH alongside Ms. Foxx paints a clear picture from whom Chicago’s celebrity prosecutor relies on for support, and, worse, who forms her base. Although it seems paradoxical those who profit from assailing police and undermining law and order could wield influence over Foxx’s office, now is an appropriate time to superficially appraise both men for their role in nourishing excessive anti-police delirium throughout Chicago.

A man whose head is full of fancies, Ja’Mal Green poses as an entrepreneur, civic activist, motivational speaker, and mentor to at-risk youth. Despite his boyish good looks and resplendent sartorial style during appearances in front of local or national media, Green’s cunning is his unique talent to slip in and out of skins which disguise the man who hides below the charade. Beneath the surface gloss, Green has consistently labored to sabotage public confidence in Chicago police. Since emerging in the public fora, Green has been at the center of countless anti-police rallies, often seen on videotape bickering with, provoking, or verbally strafing police officers. Tasks performed with skill and determination, Green has similarly surfaced in the wake of fatal, officer-involved shootings, exploiting the violent tragedies with language aimed at fueling venomous anti-police passion and anxiety, and intoning the myth police pose a danger to Chicago neighborhoods. A self-anointed factotum, following the shooting death of Paul O’Neal in August 2016, Green in a flash became a spokesman for the car thief’s family. While holding a press conference to deceitfully erect a totem of O’Neal as a symbol of alleged police sadism, Green assailed police officers and obscenely inserted a racial frame around the incident, all the while largely ignoring O’Neal’s brazen criminal behavior and flight from police. At a July 2016 demonstration, Green led a mob chanting petulant anti-police slogans, and later was taken into custody after striking then-Area Central Commander George Devereux.

While masquerading as a romantic activist, Green sought to raise money in 2017 for his planned Majostee Allstars Youth Center by climbing Mount Snowden. A summit found far outside of Chicago in the United Kingdom, the purposes of Green’s four-country European trip apart from fundraising, how the overseas journey was financed, and how much capital was collected to refurbish the Auburn Gresham building is unknown. Several months after his return from voyaging to Europe, Green quietly abandoned the project after efforts to finance the building’s renovation collapsed. Seeking to earn legitimate recognition which constantly eludes him, Green launched a laughable bid for mayor in 2018. His campaign platform laden with unoriginal, vague, and outright screwball ideas, the diminutive Green withdrew from the race over funding issues and his failure to gain the required 12,500-signature benchmark to appear on the February 2019 ballot. Following the peculiar circumstances revolving around Ms. Foxx dropping charges in the Jussie Smollett hate-crime hoax, Green joined Chicago’s anti-police posse at Rainbow/PUSH, stood next to Ms. Foxx, and slandered the FOP and police, hurling the reckless and incendiary charge the police union resembles the historical hate group, the Ku Klux Klan.

Not unlike Mr. Green, Jedidiah Brown wears many hats. The other half of the axis which seeks to keep Ms. Foxx on her throne, on Twitter Mr. Brown represents himself as the leader of JUSTICE National, the founder of Chosen Generation/Young Leaders Alliance, a community organizer, the host of a radio show, and a former candidate for Chicago alderman in two wards. An unfinished search for further information on JUSTICE National or Brown’s career as a radio host revealed nil, but according to a 2014 Hyde Park Herald article over Brown’s vapid bid for alderman in Chicago’s 5th Ward uncovered Brown also serves as a pastor with Chosen Generation Church.

But also like Mr. Green, Mr. Brown lives a life of duplicity. In addition to leading a flock at Chosen Generation, heading an obscure justice organization, and chasing practically any local political office, Brown’s not-so-secret life includes taunting and disparaging police, creating bedlam at legitimate political rallies, and spreading falsehoods and distortions over police aim and intent in public and on social media. An expert at creating chaos, Brown was instrumental in stirring a fracas at a March 2016 rally for then-presidential candidate Donald Trump held at Credit Union 1 Arena on the campus of the University of Illinois at Chicago (UIC). Although Mr. Brown was and remains an avowed opponent of President Trump, his fury with the New York real estate mogul did not discourage him from turning up at the event to stir turmoil. Amid the maelstrom, Pastor Brown was captured on tape in belligerent, physical confrontations with Trump supporters and was later forcibly removed by security after rushing the stage.

Hardly a demonstration of modesty or immaculate manners, Brown later euphorically basked in local and global media attention gleaned from his escapade at UIC. Months after his adolescent mischief at the Trump rally, Brown turned a suicide attempt into a scene paralleling a reality show. Apparently driven to the edge of an emotional cliff over the death of a close relative, in an elaborately choreographed incident in February 2017, Brown drove to 500 South Lake Shore Drive, brought traffic to a standstill, and contemplated taking his life. Never one to faff about, to Brown the setting was perfect: Parked at one of Chicago’s most celebrated symbols, Buckingham Fountain, the failed aldermanic candidate skipped an array of props, and choosing only to enrapture his audience with soft gospel music over swelling violins so as not to drown out his voice or distract from his tears, managed to battle his personal demons sufficiently to live stream the entire episode on Facebook. The short standoff ended, but only after Brown settled into a muddled and vainglorious monologue laying out his tireless but failed efforts to free Chicago from the grip of injustice and oppression. After a brief hospitalization, Brown’s suicide attempt earned him glowing profiles in, where else, HuffPost, and The Intercept, all the way to the top of the national media pyramid for a one-on-one interview with MSNBC’s Chris Hayes. While recounting to Hayes his live streamed attempted hara-kiri, Brown took the opportunity to portray police responding to the crisis not as compassionate rescuers, but as his persistent tormenters. A cheap backhand delivered at police in front of national media, Brown never acknowledged police arriving at the scene had determined even Brown’s life had a purpose and meaning. A serial harasser of police, Brown was arrested during an anti-police protest following the 2018 shooting death of an armed man, Harith Augustus. Unsurprisingly, almost if it was pre-planned, Brown’s arrest was streamed live on Facebook.

Now nearing a court date, Brown’s case for resisting arrest required the appointment of a special prosecutor due to Foxx’s connection to the so-called community activist and pastor. Foxx has apparently recused herself from the matter.

The Green-Brown axis is just an act for cameras.

Two Jekyll and Hyde characters, both Ja’Mal Green and Jedidiah Brown are frightful play actors. Although the Green-Brown axis has largely escaped intense scrutiny, even a hasty appraisal of the largest share of their public behavior should convince those willing to see reality both Green and Brown often come across as less interested in good works and more devoted to achieving fame for the sake of personal aggrandizement. While this axis outwardly projects an image of patrons of humanity, the placement of a high-definition lens over their activity uncovers their inventory of supposed goodwill includes the kind of bombast and tactics often found at home or on a bar stool: Shouting down speakers, scorning dialogue, the advancement of crank ideas, and impugning Chicago police officers with innuendo and outright fabrications. Unsatisfied with remaining voices in the wilderness, both Green and Brown have catapulted into Chicago’s conscience by appealing to hatred for law and order over settling differences between residents in high-crime neighborhoods and police. Through their routine idiocy captured on tape in which the two men whip up crowds into a frenzy or solemnly pontificate into a camera, the duo has amassed a small video library on their social media pages where they accept joyous applause from followers, and have risen above fame on YouTube, Twitter, and Facebook to draw slavish interest from local journalists and Left-wing cable hosts. To Green and Brown, community activism is just a bridgehead to celebrity, publicity, and divine stature.

The real problem here is Green’s and Brown’s proximity to Kim Foxx. Two men who are constantly at odds with the mission of fighting crime and law and order, Ja’Mal Green and Jedidiah Brown are notorious and demagogic figures; they have done incalculable damage to relations between Chicago residents and police; and they are the sworn enemy of any reconciliation among Chicago police and minority communities in desperate need of a police presence. Sadly, Green’s and Brown’s influence on Ms. Foxx is on the rise. Regardless of how blunt Green’s and Brown’s loathing for police is, where or how often it is aired, that these two contemptible men were able to stand alongside Foxx at Rainbow/PUSH is stunning in itself, but the fact they are now emerging to be Ms. Foxx’s point persons on matters relating to police is both nauseating and a discredit to her office.

A woman of staggering incompetence, Kim Foxx sees no cost in associating with members of an anti-police mob.