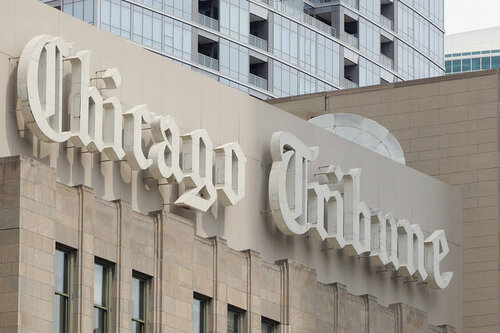 With what could be only described as a trembling pen, Chicago Tribune columnist Eric Zorn recently scratched out a column arguing that Cook County State’s Attorney Kimberly Foxx is vulnerable to an upset in the upcoming election based on the results in the primary election.

In a column published on March 17, Zorn wrote:

“I see more than a hint of political vulnerability in these results. Though Foxx has dismissed the controversy over her handling of the Jussie Smollett case with a barnyard epithet, a substantial number of voters apparently remain concerned and still want answers.”

Zorn blaming the Jussie Smollett scandal as the reason for Foxx’s vulnerability is deceptive.

To many police officers, prosecutors, and conservatives, Eric Zorn can best be described as a media personality from the school of Saul Alinsky, the political theorist who took the screaming, weak factions of the radical Left from the late 1960s and transformed them into the formidable, more cohesive movement they are today, a movement having great sway over education, law, and the media.

The Alinsky strategy united the warring factions of the 1960s Left by dictating that they should work within the system covertly, particularly the Democratic Party, disguising with higher principle their most mendacious intents.

“By contrast, Alinsky urged radicals to infiltrate the Democratic Party and traditional institutions with the goal of subverting them. Rhetorical moderation was his stock in trade. While Tom Hayden and Abbie Hoffman were marching on Lyndon Johnson’s Pentagon (“Hey, hey, LBJ, how many kids did you kill today?”) and fomenting riots at the Democratic convention, Alinsky’s organizers were insinuating themselves into Lyndon Johnson’s “War on Poverty” program, directing federal funds into their own organizations and causes, and signing up as Democratic Party activists.”

It worked magically. Members of groups like the Weather Underground, whose bombings throughout the country and calls for killing “the pigs” only alienated the larger public, ultimately became professors of law and education at prestigious universities, making bizarre arguments about social justice while refusing to apologize for their violent, revolutionary pasts.

So, too, with the media. The Chicago Tribune, once a lone but powerful Republican voice in a city controlled by a formidable Democratic political machine, was transformed into a powerful voice for the radical Left by starry-eyed journalism graduates from leftist factories like the Medill School of Journalism at Northwestern University. No figure at the Tribune is tied to this transformation more than Eric Zorn. Zorn did so chiefly by constructing a narrative of police corruption, championing the claims that many offenders lingering in prison for murder were actually framed by the police, for it is a treasured maxim of the Left that criminals, even the most violent and cruel, are victims of a corrupt and oppressive system and the police are the real criminals.

The whole movement was bolstered with the election of President Obama, whose early political career included work on the South Side of Chicago as a community organizer and as an attorney for an Alinskyesque organization called ACORN. When Obama was elected and announced the appointment of Eric Holder as the Attorney General, wrongful conviction advocates could be assured of no federal interference in their crusade against Chicago’s criminal justice system.

And they were right. Federal prosecutors, for example, turned a blind eye to the release of Madison Hobley in 2003 and three other convicted killers at the behest of Governor George Ryan. Hobley’s release from his conviction for setting a fire in 1982 that killed seven people stands as one of the greatest abuses in the history of the state’s criminal justice system. To this day, no media outlet in the city, and certainly not the Chicago Tribune, is willing to take a look at this case and explore why it was that federal prosecutors decided not to charge Hobley federally and stood by as he was paid out $7 million from the public coffers.

Hobley’s case was chalked up as a wrongful conviction, the party line claim touted by Zorn and the Chicago Tribune to justify their attacks on the police. It held that Chicago Police officers routinely coerced confessions in murder and rape cases, even when, like the Hobley case, there was no real evidence to bolster the claim, and myriad evidence showing that it was false.

Throughout this entire period, the Alinskyesque coverage of these cases revealed as much about the “ends justify the means” methods of the media as they did about police corruption. To maintain their narrative, the media employed two strategies over and over: They merely ignored the evidence of wrongdoing in the police accusers or ridiculed those who brought them forward.

It all worked swimmingly until some of the most sordid wrongful convictions bubbled to the public surface despite the media code of silence that protected them. A professor at Northwestern University’s Medill School of Journalism, David Protess, left the school in the midst of a scandal in which even the university admitted Protess was deceiving the school about his so-called “investigations” into cases.

The most suspicious case was the exoneration of Anthony Porter for a double murder, but many others have arisen, so many that any city with a truly functioning, independent media would have long ago begun the hard, crucial work of truly investigating them. At the same time, something even darker and riskier than the media actually covering wrongful conviction cases fairly emerged in the prosecutor’s office. Former Cook County State’s Attorney Anita Alvarez reviewed many of these cases and declared the original convictions legitimate.

In a host of cases against a former detective named Reynaldo Guevara, for example, Alvarez’s prosecutors rejected the media pressure that Guevara had framed offenders in several cases. Worse, Alvarez reviewed likely the biggest exoneration case, the Anthony Porter exoneration, and rejected the case that David Protess and his supporters had constructed.

Even though Alvarez was a Democrat, such heretical decisions in the more radical Democratic Party taking shape in the city was utterly unacceptable. Rule on the evidence and not on the hysteria created by the media?

These decisions spelled Alvarez’s doom. The progressives, united under the Alinsky guidelines, went to work, putting up Kimberly Foxx against Alvarez despite Foxx’s utter lack of experience and poor reputation among other prosecutors. George Soros flooded money to Foxx’s campaign and that, as they say, was the end of that. Alvarez lost. Foxx won.

A radical’s radical, Foxx has fulfilled her mission to transform the prosecutor’s officer into an agency for the anti-police movement in pure Alinsky style. In doing so, Foxx has preserved a crucial, symbiotic relationship with media comrades like Zorn. That relationship includes a willingness of the press to ignore the larger scandals of Foxx’s administration—more utterly suspicious and potentially baseless exonerations of once-convicted brutal killers—and focus solely on the Jussie Smollett scandal.

For within days of taking office, Foxx began releasing convicted criminals whose convictions Alvarez had bolstered, letting them out of prison and pushing their cases into the federal courts, where they will seek millions in damages for their “wrongful convictions.”

One such travesty moves to the forefront: Foxx’s decision to release Nevest Coleman from prison for his conviction of murdering and raping Antwinica Bridgeman in 1994. The detectives accused in this case have been on the Tribune’s radar for decades, renowned investigators during their stint serving Chicagoans, now regularly attacked in Tribune diatribes posing as journalism.

There seemed to be some wavering by Foxx’s office on this case. Bridgeman, after all, was found in Coleman’s Englewood basement and was last seen leaving a party with Coleman, but Zorn appeared angry that Foxx would deny this exoneration because evidence, a DNA semen sample, came back to another serial rapist. The fact that myriad reasons could explain the presence of the DNA on Bridgeman but that he was not the offender was never given voice in the media coverage.

“If we’d wanted a top prosecutor who dragged her feet on apparent wrongful convictions and stubbornly refused to heed the demands of justice, we would have re-elected Anita Alvarez.”

“You ran as a reformer against Alvarez in the March 2016 Democratic primary, reminding voters that “trust in our criminal justice system has been broken” and promising fairer outcomes.”

“Voters believed you. You thumped Alvarez in the primary and cruised to victory in the general election a year ago.”

“Fight back. Coleman and Fulton remain locked up for a crime they almost certainly didn’t commit. At least let them post bond while you wait for every last test result. Start trying to reclaim your cred as an agent of change.”

Foxx’s willingness to release criminals on the most pathetic, suspicious claims of wrongful conviction is the real story in Chicago, one reason why Zorn and the rest of the journalists won’t cover it. For how troubling would it be for Zorn and “the movement” media to see a Republican prosecutor elected and to have their propaganda war against the police and the criminal justice system exposed as one of the most despicable eras in the history of modern journalism?

It might reveal that in the Alinsky world Chicago now lives under, there is no such thing as fact. Everything is propaganda used in a pitched power battle. In this, Foxx and Zorn appear to hold a desperate, symbiotic relationship.

In the unlikely event of Foxx losing to a Republican, so much would be a stake. For the Alinskyites throughout the city, it would be the stuff of nightmares.