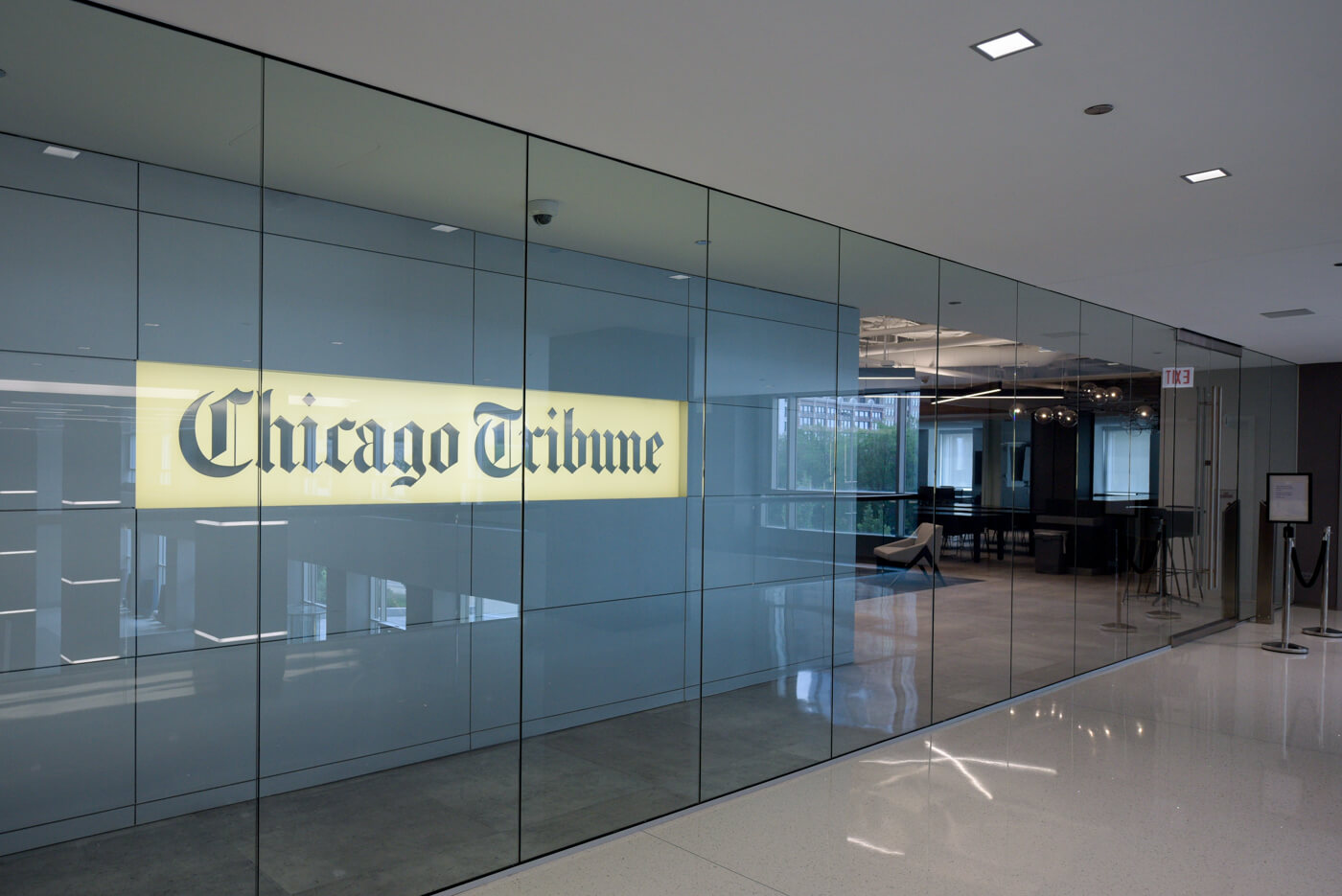 In a world enraptured with equity, justice, and anti-merit principles, that the Chicago Tribune finds itself the meal of “vulture” hedge fund Alden Global Capital, should come as no surprise to anyone. The notion of the now left-leaning paper guising itself as some sort of objective foundational bedrock of a free and healthy functioning democracy deserving of continued life support, appears laughable, especially given it has lost its core audience by editorial design (more on this in a minute).

With the exception of a few good reporters, who will find great positions because they view themselves as reporters and not citizen activists and will always land on their feet, the journalist base of the Tribune has been eviscerated, as seasoned expert reporters and columnists (e.g., Blair Kamin in the architecture realm) have been replaced by millennials straight out of journalism school. How else to explain its recent earnings report, with total revenue decreasing from $206 million to $174 million, during a period in which everyone craved news, yet people were clearly not voting for the Tribune with their eyeballs and wallet.

“By any measure including return on net assets (RONA), return on invested capital (ROIC) or plane-jane EBITDA, The Chicago Tribune’s financial metrics and online numbers are not where they should be, despite turnaround efforts and cost slashing, in the current market,” one local media executive told the Chicago Contrarian. “It’s tried to cut its way out of a mess, but combining cost reductions with activist progressive journalism rather than hard hitting news and features in a local broadsheet that rarely gets a national audience is a train wreck of a strategy.”

“Eventually your topline will catch up with the bottom line, and when you decline 16 percent year-over-year like last quarter during a time when everyone is online reading the news, something is massively wrong,” our source suggests.

Hence it’s not surprising the vultures are picking at the carcass. But what happened for us to get here?

Today, the Chicago Tribune stands as a tiny shadow of its former self. Whereas the Sun-Times has always served as the working man’s left-leaning paper, the Chicago Tribune used to champion business, a sense of civic duty, and conduct hardcore investigative journalism as well as apply a ruthless adherence to the “inverted pyramid” of journalism — the five Ws — who, what, where, when, why and how followed by additional important details.

After all, the Chicago Tribune used to be the paper of Abraham Lincoln and the Republican Party (a little known fact we’d add).

The paper’s current woes actually began in 2006 when the Tribune company decided to sell itself as the board considered selling assets, restructuring or going private according to the Tribune itself. In April of 2007, Sam Zell bought the company in a leveraged buy-out (LBO) and took it private with an employee stock ownership plan leaving Zell with control over the conglomerate. Later that year, the second part of the deal closed, saddling the company with $13 billion of debt. The paper then sold a Long Island newspaper for $650 million to raise capital. Then in December of 2008, the paper filed for bankruptcy.

“LBOs are a path of last resort and are not options that healthy organizations typically opt for when raising capital,” says our media source. In fact, LBOs are sometimes hostile. But the Tribune’s fated LBO is not the end of the story.

In August, 2009, the Ricketts family bought the paper for $800 million and the company came out of bankruptcy in December 2012. Then, in 2013, the paper split its publishing from its media division and in 2014 the publishing entity bought 38 suburban papers to improve reach. The company then went on to buy the San Diego Tribune for $85 million.

Fast forward to 2016 and Gannett offers $815 million for the company and to take over $390 million in debt but the board votes to reject the offer. Negotiations ensue along with other shareholders but the company rebukes all offers. Oaktree Capital, which had previously purchased shares, decides to sell all of its shares back to the company.

Parent company Tronc proceeds to sell several of its California acquisitions and eventually Michael Ferro, former CEO and board member of The Tribune Publishing Company sells his 25.2 percent stake in the company to Alden Global Capital in November of 2019. At the same time, Alden increases its equity stake to 32 percent. An investor from Thomson Financial then buys a 7-percent stake in the company in March of last year.

After a rough pandemic year, the paper implements a “poison pill” strategy to avoid any hostile takeovers. In December of 2020, Alden offered $520 million to take the company private again. In February, the Board agreed to be purchased by Alden for $630 million as an alternative bidder dropped out of contention.
Which brings us to today.

Hedge funds earn a bad reputation when they swoop in to pick up an asset on the cheap. Eddie Lampert, the former CEO of Sears Holding, never won any awards for implementing a successful turnaround strategy (at the end of the day, he failed miserably as he sold off the best of Sears). But Sears was on its deathbed long before Eddie Lampert came on the scene. A consultant once recalled in the late ‘90s, while doing a consulting project at corporate headquarters, staffers were napping on lobby couches. At this point, Amazon, Target and Walmart had already outflanked Sears. To his credit, Lampert sure tried to turn around the ailing ship but to no avail. Only 500 stores remain open today.

All of the media coverage of the Tribune’s largest owner Alden, is negative (Alden wants to purchase the remaining shares). Of course the media covering Alden are those who stand to lose their jobs in any logical restructuring and realignment of content and publishing models to market needs. This restructuring would appear to be needed, as diligence issues, perhaps tied to labor costs, debt and top line results compared to new media models and even other papers, may have surfaced, according to the Financial Times, when another potential buyer pulled out of talks.

In terms of Alden, the elusive founder, Heath Freeman of New York has not responded to media requests or requests by employees of the Tribune to meet and discuss his plans for the paper. Alden appears to have a history of buying papers across the country and harvesting what is left of cash flow by driving operating efficiencies. Critics of Alden point out that other news organizations in the Alden portfolio have received no new investments or innovative strategies to become the profit machines they once were. Tribune journalists even penned an op-ed claiming truth in journalism and our democracy remain at risk if the paper is taken over by Alden.

Progressive journalists often paint hedge funds as ruthless bloodsuckers taking cash flows and redistributing those funds to themselves. But these investors of last resort perform a vital public service in a capitalist economy too. They help dispose of unhealthy, ailing assets. Think of hedge funds like Alden as garbage collectors. “The Chicago Tribune is rudderless and has lost its way, deserving of the rubbish bin to have its meaty bits picked apart and recycled into something better,” says our media source.

The root cause of the Tribune’s failure

It should be said the Chicago Tribune is not just the Tribune. It includes the following brands according to the parent company’s website: Chicago Tribune, New York Daily News, The Baltimore Sun, Orlando Sentinel, South Florida’s Sun-Sentinel, Virginia’s Daily Press and The Virginian-Pilot, The Morning Call of Lehigh Valley, Pennsylvania, the Hartford Courant, Tribune Content Agency and the Daily Meal.

But across many of these brands — and especially our local paper — there are a number of reasons for its wayward listing.

The media executive Chicago Contrarian spoke with suggests: “There are three key reasons why the Tribune is suffering from an editorial perspective, all of which are internal. First, the voice has shifted. But you need to unpack why. From sources I have spoken with who have left, it would seem they are firing high cost senior reporters and editors and replacing them with younger, less experienced writers.”

“This brings me to the second reason why the paper and its parent company have lost their way. They have replaced these reporters and editors with low cost, millennial resources who not only lean politically to one side — not a problem by itself — but lack the mentoring and coaching to leave their progressive thinking out of their work. There’s only room for one NYT in this country — and even if you hate the politics of The New York Times, the quality of the reporting is so much better today in comparison, as The Tribune's journalistic and editorial bench strength has declined massively.”

“Given the lack of mentoring, simply put, the quality of the end product has declined. It’s a vicious cycle as 'As' hire 'A' players in the newspaper and media business and 'Bs' hire 'Cs'. The 'As' are gone, a point which leads into a related third reason for the fall from quality: Key personnel changes and leadership at the senior editorial levels have left The Chicago Tribune with truly second city leadership. It’s musical chairs. And today, they are in over their heads. Granted, they might pull off an acceptable product in Des Moines, but in Chicago? Good luck.”

Alden might be able to do it. And as for a financial buyer profiting from the endeavor? Chicagoans can bless them for their willingness to get their hands dirty to see if anything can be saved, especially given that a socialist sympathizing Swiss billionaire — who was politically motivated to save the Tribune — passed on the opportunity based on what he found in due diligence.

What’s clear about the paper’s history since 2006, is that not a single owner for the past 25 years has been bold enough to innovate, identify and implement a sustainable path forward. The only thing left for the Tribune is to toss it to the vultures and let the Invisible Hand decide what is left to save. After all, if the remaining assets get picked apart by the next owner and individually sold to the highest bidder, shut down or jettisoned, Chicago should celebrate a potential new future for a former iconic brand.

How could this happen? Our insider opines:

“Besides slashing operating costs and leveraging the asset with the slowly dwindling cash flows that remain out of necessity, my steps for fixing it would be as follows: bring back senior talent as an anchor and hire those experienced with new media models to steer the ship, editorial agenda and digital strategy; avoid taking a political stance and double-down on reporting on key topics like crime and the criminal justice system — and fire those who fancy themselves NYT reporters but can’t even begin to cleverly hide their biases in reporting like best-in-class progressive journalists who can nearly get away with it; and form partnerships with new apps to drive localized and even peer-to-peer content — think of Wirepoints as an archetype for a community that cares and drives social engagement.”

He concludes: “And finally go to war with City Hall and Cook County without tiptoeing around a mayor who does not even want an audience with reporters which lack specific skin hues and ‘lived experiences’ — a politician in over her head who can’t be bothered to even subscribe anymore because of pettiness. Simply put: stand for something, stand tall and represent the intellectual, professional and working classes together who want to rebuild a great city rather than tolerate the malfeasance and lack of leadership which has brought us to where we are today. We are a city of broad shoulders — the Chicago Tribune should be our backbone rather than slouching its headquarters and namesake broadsheet into Detroit on Lake Michigan.”