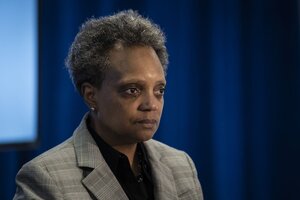 Time for the mayor to stop playing politics and do the right thing?

The bloodbath in Chicago that claimed 14 lives and injured over 100 people last weekend is the final sign that Mayor Lori Lightfoot’s administration has imploded.

The reason is easy enough to see:  Lightfoot has attempted the impossible task of catering to her progressive allies while at the same time trying to govern Chicago. Throughout the country, the evidence abounds that progressivism and effectively governing are mutually exclusive.  Progressive governance leads to disaster.  Seattle’s violent, filthy autonomous zone is perhaps the best example of where Chicago and the rest of the country could be headed.

Prior to last weekend’s bloodbath, Lighfoot’s schizophrenic leadership of the city was on full display. To her credit, she rejected the progressive lunacy of defunding the police. But at the same time, Lightfoot used the rioting and looting that has left much of the city a near ghost town as an opportunity to attack the police when officers reacted to the unjustified and illegal abuse from “demonstrators.” For a mayor who has revealed a short fuse of her own, attacking officers with such venom only threw gas on the anti-police attacks throughout the city and encouraged more anti-police passion among “demonstrators.”

Appearing with Bobby Rush in what appeared to be a well-rehearsed press conference to condemn the police on the highly suspicious claim the exhausted police officers had no right to unwind at Rush’s office, which had just been broken into, was perhaps the worst move Lightfoot could make. Once again, it fanned the anti-police flames throughout the city. In the press conference dog and pony show, so similar to Cook County State’s Attorney Kimberly Foxx appearing with Rush to justify her decision not to prosecute Jesse Smollet, it was as if Lightfoot was reassuring the progressives in the city that she was ultimately on their side.

How, on the one hand, can Lightfoot bolster the need for police by defying the call for defunding them, then, on the other, appear with a former member of the Black Panthers, who advocated for and committed violence against the police for more than a decade? How many police officers were murder by the Panthers?

Lightfoot’s appearance with Rush undermines her ability to govern the city in other ways, as well. Rush is deeply connected to the anti-police movement that is waging war in the city apart from demonstrations and looting. As a former Black Panther, Rush is tied to the law firm that regularly sue the police for misconduct, particularly the law firm called the People’s Law Office (PLO).

The PLO was formed in response to the shootout between police and the Black Panthers that left Fred Hampton and Mark Clark dead. But it wasn’t just the Panthers who the PLO supported. Numerous media reports indicate that the PLO was also deeply allied with members of the radical Weather Underground, who set off bombs throughout the country, including police stations. Currently, the PLO has several cases in the federal courts alleging police coerced confessions from convicted felons claiming innocence.

Here, Lightfoot’s schizophrenic administration reveals itself again. One of Lightfoot’s first decisions as mayor was to dump the former head attorney for the city, Ed Siskel, whose legal strategy appeared to be little more than writing massive checks to law firms like the PLO. The low point of Siskel’s ignominious career was recommending a payout of $32 million dollars to four men known as the Englewood Four, once convicted of raping and murdering Nina Glover and tossing her body in a dumpster.

What made this settlement even more obscene was the fact that the detectives accused in the case have been accused of similar acts by the media and law firms like the PLO for decades. Siskel’s decision to settle this case betrayed these former detectives, as they have steadfastly maintained their innocence since the allegations were leveled.

When elected, Lightfoot replaced Siskel with Mark Flessner, who has demonstrated a willingness to fight back against claims of police coercion in a host of cases. Flessner’s law department is now defending the same detectives thrown under the bus by Siskel in the Englewood Four case, a radical and welcome change in the city’s strategy of representing its officers. In doing so, attorneys working for the city on the cases have brought forth powerful evidence of a pattern and practice of misconduct in the exoneration industry, including the cases against these detectives.

Why, then, is Lightfoot’s Corporation Counsel fighting these cases in a way no other mayor has done previously, but at the same time also appearing with the likes of Bobby Rush?

Lightfoot’s schizophrenic administration goes even deeper. While the Corporation Counsel is fighting these cases against the police, city attorneys at her direction are continuing their attacks on police in the kangaroo court that is the Chicago Police Board. An arbitrary, unaccountable collection of hacks appointed by the mayor and led by a man, Ghian Foreman, who took part in a recent protest against the police, police board hearings undermine established policy, evidence, and fairness to a point most officers simply view the Police Board as an agency designed to wage war against them.

Perhaps the greatest victory for the anti-police movement in Chicago was getting Cook County State’s Attorney Kimberly Foxx elected top prosecutor. Foxx has proven herself an ardent anti-police soldier, transforming her office into an agency advocating on behalf of criminals and working to criminalize the police. That was one likely reason why she, like Lightfoot, ran to Bobby Rush in another bizarre press conference At Rainbow/PUSH in which Foxx was trying to justify the abandonment of her duty in the Jesse Smollett case.

Foxx is also part of a national trend imposing similarly radical, agenda-driven prosecutors throughout other major cities. Easy bails, criminals back out on the street, cops turned into the criminals, the consequences of electing such prosecutors is manifest in skyrocketing crime and violence. More so, Foxx was heavily supported by law firms that regularly sue the police in cases Lightfoot’s corporation counsel is fighting in court. Nevertheless, last year Lightfoot endorsed Foxx for another term as the top prosecutor.

Talk about a divided house and bowing to her progressive brethren. As the skyrocketing violent crime shows, Foxx’s pro-criminal, anti-police fanaticism spells chaos for Chicago. Diminishing crime in the city will be all but impossible should Foxx get re-elected. Dozens more criminals may be “exonerated” on the flimsiest claims by Foxx, all of whom will march right back into federal court with a multi-million lawsuit against the police.

After another delirious weekend that saw more than 100 people shot, following by a Monday that saw 40 more shot, Lightfoot must sees that her divided house is crumbling. Elected leaders like Lightfoot must face the fact that embracing the radicalism of the progressive movement, now nearly in full control of the Democratic Party, will destroy American cities and the administrations of those running them.

To save her administration, reputation, and the city itself, there are several key moves Lightfoot can make.

One is to cease the war on the Chicago police union, the Fraternal Order of Police (FOP). As the last institution that offers any protection to the rights of police officers, Lightfoot’s fierce rhetoric against the Lodge and its representatives, along with her support of policies that are clearly part of a larger progressive crusade to destroy the union, must cease.

That means a contract for the police, now expired three years. The fact that other unions, particularly those representing the print media, are also pushing to destroy the FOP should not dissuade Lightfoot from doing the right thing.

Lightfoot needs to take on Foxx and her mentor Toni Preckwinkle, whose radicalism is so extreme it certainly makes George Soros proud. Chicago simply cannot endure if Foxx has free reign to release the criminals and criminalize the police. At the same time, Lightfoot should forge new relationships with officials in the Department of Justice (DOJ), using them to prosecute crimes Foxx won’t and bringing evidence of any pattern and practice of false allegations against Chicago police officers to their attention.

Lightfoot should unify the Corporation Counsel, focusing on the corruption in the false allegations against the police that have cost the city hundreds of millions of dollars, but at the same time ridding the agency of activist attorneys hell-bent on firing police officers or settling cases like the Englewood Four.

In short, Lightfoot must decide whether she will govern by doing the right thing, or she will squander her political capital to her progressive allies.

Because this divided house cannot stand.

Martin Preib is a Chicago Police Officer and writer. His first book, The Wagon and Other Stories From the City, was published by the University of Chicago Press. His second book, Crooked City, is available on Amazon. His articles have appeared in Playboy, The Chicagoan, Virginia Quarterly Review, Tin House, and New City. He recently published his third book about an arson in 1987, titled Burn Patterns.