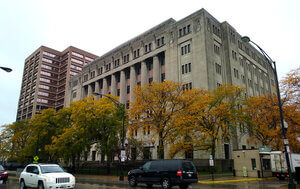 Here’s a question no journalist in Chicago will ask any official or player from the Chicago White Sox: Does Antwinica Bridgeman’s life Matter?

Antwinica Bridgeman’s badly decomposed body was found in the basement of a south side building in 1994 not too far from White Sox stadium. Bridgeman, then 20, had been last seen after celebrating her birthday. She had been raped and murdered. According to police reports, a pipe had been thrust into Bridgeman’s vagina and she had been struck so forcefully with a brick, remnants of her teeth were found in her stomach.

The basement where Antwinica was found was the dwelling of a White Sox employee, Nevest Coleman, who worked as a groundskeeper for the franchise. Coleman and another man, Daryl Fulton, eventually confessed to murdering Bridgeman and were given life sentences.

At sentencing, a shaken Cook County Circuit Judge Dennis J. Porter berated Coleman for the savagery of the crime:

“These are the acts of a barbarian. I wish I could believe you are sorry about what happened, but quite frankly I don't think that's true at all. I don't think you care any more about that person and what you did than stepping on a cockroach or an ant and walking out of this building. I think that's the way you are.

"I don't have any doubt at all that you're guilty of the murder of this woman and the aggravated sexual assault of this woman. Absolutely none. I hope you can live with yourself because I really doubt that I could. But that's for you."

Coleman and Fulton remained in prison until their case caught the attention of attorneys at prominent civil rights law firm Loevy and Loevy, especially when more sophisticated DNA tests of Bridgeman’s pants later came back to another man, a serial rapist. Lawyers for Loevy and Loevy also have worked at the University of Chicago’s Exoneration Project, a key player in the wrongful conviction movement.

The DNA test was the “a ha” moment that initiated what would eventually be Coleman and Fulton’s exoneration for the crime, complete with a certificate of innocence from the courts.

What bolstered Coleman’s case was an intense media campaign pushing the claims of Loevy and Loevy by focusing on the new DNA results. What the media hardly addressed, indeed, has yet to explain, is the fact that Bridgeman was last seen leaving a party with Coleman before she was found dead in his basement. Wearing the same clothing she was last seen in.

Reporters with the Tribune and Sun-Times have never explained the possibility that Bridgeman could last be seen with Coleman and then be found in his basement, but another man was entirely responsible for the crime.

In some freakish coincidence, did the real killer just happen to pick the same dwelling to rape and murder Bridgeman as the person who was last seen with her and that person played no role in her death?

With the election of Kimberly Foxx over incumbent Anita Alvarez, Zorn argued that exonerating men like Coleman was Foxx’s obligation:

“If we’d wanted a top prosecutor who dragged her feet on apparent wrongful convictions and stubbornly refused to heed the demands of justice, we would have re-elected Anita Alvarez.”

“You ran as a reformer against Alvarez in the March 2016 Democratic primary, reminding voters that ‘trust in our criminal justice system has been broken’ and promising fairer outcomes.”

“Voters believed you. You thumped Alvarez in the primary and cruised to victory in the general election a year ago.”

“Yet you’re allowing Nevest Coleman and Darryl Fulton to continue to rot in prison in the face of overwhelming new evidence that they are innocent of a 1994 rape and murder in the Englewood neighborhood.”

If the evidence was so overwhelming on behalf of Coleman, as Zorn claimed, why didn’t Alvarez release him? Zorn also conveniently left out another salient fact in his diatribe: Attorneys at Loevy and Loevy contributed to Foxx’s election campaign.

Also ignored by Zorn and his colleagues at the Tribune and Sun-Times was the fact that the former prosecutor who tried the case, Brian Sexton, maintained that Coleman was guilty. So did Bridgeman’s boyfriend.

“Chester Latham, now married and living in Iowa, still keeps in touch with the family. He summed up the Bridgemans’ feelings about Coleman's release succinctly: "Total, straight-up bulls---," Latham says. "Something is wrong with this picture."

“Latham understands there isn't DNA evidence directly linking Coleman, Fulton or Taylor to the murder scene. But he can't get over the fact that Coleman was the last person known to have seen her. And Fulton and Taylor had just harassed her weeks before. And the body was found in Coleman's basement.”

A key subplot in the Coleman case and the coverage of it by the Tribune and Eric Zorn is the fact that some of the detectives who worked the case have been under relentless attack by Zorn, his paper, and civil rights law firms for decades. One of those detectives is Kenneth Boudreau, now retired. Boudreau refuses to take the Fifth Amendment in cases where he is accused. He spoke out strongly in the Coleman case.

"It's not just garbage. It's a travesty of justice what they're doing to this system. If I'm a man in the penitentiary and I'm sitting there for the next 30, 40 years, you're damn right I'm going to think of any which way to get out. But now you get these attorneys involved and it's not only 'I'll help you out' but 'I'm going to make a couple million dollars doing it.'"

“Boudreau said he was "floored" when the state issued Coleman a certificate of innocence with nary a fight.”

Ignored by Zorn and his colleagues in the print media are the compelling signs that attorneys for the City of Chicago representing Boudreau and other former detectives in federal lawsuits brought by Coleman and other exonerees are defending the cases by claiming that not only are the detectives not guilty of wrongdoing, but the offenders are guilty of the original crimes, regardless of their releases. City attorneys have argued that the men should not have been exonerated.

These developments are ignored by Zorn and the rest of the media with a uniformity and strictness resembling journalism in an authoritarian regime, not a republic, and give heavy weight to the record low public distrust of the media throughout the country.

Indeed, in some of these cases, the city attorneys are alleging that lawyers for a convicted murderer released from prison are actually using the media to push the case in the court of public opinion.  One case in particular stands out.

Tyrone Hood and Wayne Washington were convicted of the 1993 murder of Marshall Morgan, a basketball player at the Illinois Institute of Technology. Hood had his sentence commuted in the waning moments of Governor Quinn’s scandal-plagued administration. Hood’s attorneys have filed a federal civil lawsuit against the detectives, including Kenneth Boudreau.

Attorneys for Chicago are fighting back in the lawsuit, claiming the media pushed a false narrative in the case used to justify Quinn’s release of Hood.

“…Hood’s attorneys at the Exoneration Project (EP) opted for a coordinated and misleading media campaign to try Hood’s case outside of the courts. The EP relied on local and national media contacts, including a former NBC5 reporter, other “friendly reporters,” a social media presence, and celebrities to generate sympathetic publicity for Hood and to pressure public officials.”

How is this different from the Nevest Coleman case, where journalists and columnist refused to ask elemental questions?

So it went. After Coleman got out of prison, the White Sox leaders re-hired him for his old job working at the stadium to much fanfare from the fawning media. Not only did Coleman get his job back, but he was also given a World Series ring for the year Coleman was in prison and the Sox won it all.

“Coleman was the final recipient of this special token of Reinsdorf’s appreciation. All of the grounds crew members who were employed during that magical 2005 season were rewarded the following year.”

“The delay on Coleman’s ceremony wasn’t due to an oversight by the White Sox. It was due to the 23 years of hell he faced while wrongfully serving a prison sentence.”

“It was emotional. It was heartfelt. It was undeniably a well deserved moment for a man who has endured through unfathomable circumstances.”

Just how far will a professional sports teams go for pandering to the public? What does it mean that the White Sox would use a murder case like this one as public relations gambit? Is that what Major League Baseball is doing with Black Lives Matter, as radical group that riots throughout the country and calls for a war on police?

Does her life matter?