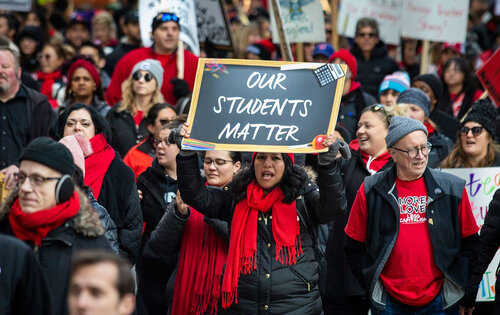 CPS’ guidelines for school re-opening is a disguised push for permanent remote learning.

To hear Stacy Davis Gates tell it, the primary concern of the Chicago Teachers Union (CTU) for the resumption of in-person education for Chicago public school students revolves around the health of pupils enrolled in and employees of the Chicago Public Schools (CPS).  Davis Gates, who serves as the vice president of the CTU, has also been a permanent fixture on local television in recent weeks as Mayor Lightfoot, CPS officials, and the CTU explore efficacious means for CPS students to return to academic learning for the fall semester in 2020.  To the surprise of virtually no one, the mayor and CPS officials, all of whom favor a limited return to schools, are at odds with the CTU, which remains committed to remote learning in the fall.  The dispute is setting the stage for a bitter battle between the mayor and the CPS against the CTU.

To accommodate Chicago’s students, the CPS is advancing a hybrid plan under which K-10 pupils would return to school part-time and under which students would rotate days in school.  Additionally, the CPS is currently weighing the option of having students in the 11th and 12th grade learn on an entirely remote basis.  A plan which the CPS says balances need for health and safety while allowing for in-person instruction, the CPS has offered assurances if in the case of a wider outbreak of COVID-19, it is prepared to shift learning to learn-at-home full time.

While the decision in March to temporarily shutter schools and transition to remote learning was necessary to contend with COVID-19, a verdict over distance education has been rendered:  It failed.  According to studies, though educators pivoted quickly to at-home learning, children continuing their education as remote students often failed to show up, engagement with coursework was relatively low, and involvement with academics dipped lower as the semester continued.  Despite evidence demonstrating remote learning was a flop, CTU president Jesse Sharkey, Davis Gates, and their devout congregation of followers are emphatic virtual learning is the most sensible course of action for learning in the fall.  A position which clashes with some health institutions and health experts, there is a reason why the CTU is unwavering in its commitment to remote learning in the fall, and it has little to do with the health or success of its students.

Although the Illinois State Board of Education (ISBE) and the Illinois Department of Public Health (IDPH) have issued guidelines of its own encouraging a full return to classrooms, the CTU has released a set of instructions, which insists on remote learning only.  Predictably, the CTU’s guidance is rather broad and, as one has come to expect from the CTU, embraces numerous issues unrelated to education.  In a ten-page manifesto delineating a curious set of conditions under which they anticipate returning to work, the CTU is estimating it requires anywhere from $450 million upwards of $1.7 billion in federal funds for the CPS to safely re-open.  Though the CTU carefully sidesteps the fact the CPS reaped $205 million in coronavirus relief through the CARES Act, it continues to demand a federal bailout by fully funding Title I and IDEA, the Individuals With Disabilities Education Act.   Additionally, according to the CTU’s logic, Medicare-for-All must become a reality to stymie “the boundless greed of the for-profit health industry.”

On the state level, according to the CTU, for schools to resume operation Springfield must discard the state’s flat tax and adopt the “fair and graduated” Fair Tax to ensure “those most able to pay are the ones to do so.”  Locally, the CTU’s demands grow more absurd.  To best serve the voiceless masses who the CTU claims are underserved by elites, the union is calling for defunding of the Chicago Police Department and removal of police presence from city schools.  To accompany the removal of police from schools, the CTU is demanding the $33 million in police funds for providing security to schools be handed over to the CPS to cover the “other essential needs such as housing and public health.”  In addition to defunding police, to satisfy its budgetary needs, the CTU is calling on Chicago to retire seven Tax Increment Financing (TIF) districts.  The end of these seven TIFs, the CTU claims, would raise another $180 million in needed funds to re-open schools.  Last, because the situation is so bleak for students, faculty, and staff, the CTU is calling for “housing security” through an end to a ban on rent control, paid sick leave for Chicago residents, and expanded eligibility for financial assistance for “immigrant students and workers, so vital to our schools and our economy.”  Bringing its proclamation to a merciful end, the CTU concludes under a banner headline:  “Normal Wasn’t Working For Us before, We Can’t Go Back.”

The CTU can no longer hide or disguise itself.

Though the CTU’s guidelines emphasize its members’ compassion and enthusiasm for educating children, the conditions placed by the union are almost entirely political, unattainable, uncompromisingly radical, and both unmoored to education and inconsistent with education’s goal of empowering and enlightening students enrolled in the CPS.  While it is tempting to brush off the CTU’s demands as the union expressing its collectivist doctrine with worries about workers’ rights, universal health care, rent control, and state tax policy, a more plausible explanation for the CTU’s recalcitrance to returning to in-school learning rests with a desire to permanently re-locate learning to the home.  For decades Progressive pedagogy has witnessed traditional classroom education devolve from student interaction between a teacher who demands attention and imparts hard facts and valuable knowledge to a dull-witted “group learning” classroom format in which students are charged with creating their own knowledge.  The ascendant “learning” model in our schools today, if coupled with the dominant role technology plays in education today, to the CTU, the COVID-19 outbreak is the mother of all opportunities to realize the goal of eternal virtual learning.  Once the pandemic struck, CTU educators adapted to the comforts and privileges afforded by the sudden transition to online teaching.  These are advantages CPS educators are unwilling to surrender easily and all of this is provided at public expense.

Mayor Lightfoot has a serious problem on her hands.  Although the city is at a low point, as Chicago rallies back from the coronavirus and destructive riots, the CTU is leveraging a global pandemic to push for universal remote learning, possibly under the threat of a strike.  Hardly a constructive contribution to city harmony, and one which should render public school teachers expendable, it is important to bear in mind this is the same CTU which took Chicago to the cleaners in a crushing strike nine months ago, vehemently campaigned to remove measures in its contract which base teacher security and advancement on student achievement, and shares some responsibility for students’ listless academic performance.

Ms. Lightfoot has a critical responsibility to defend CPS students.  To meet the latest provocation leveled by the teachers union, the mayor must assert herself on behalf of students and defang the CTU.  Unfortunately for Chicago’s pupils, Ms. Lightfoot has a habit of running from the challenge of authority.