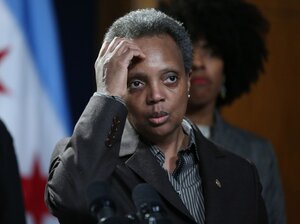 Long before Lori Lightfoot arrived, Chicago was a city where residents could safely live.  Although violent crime had long scarred pockets of the Windy City’s landscape, in the aftermath of the death of George Floyd in Minneapolis a citywide surge in violence occurred alongside the commotion of protests deploring Floyd’s death in police custody.  Mass gatherings which more closely resembled an armed rebellion than an act of spontaneous protests, Mayor Lori Lightfoot’s response to widespread looting and rioting neither demonstrated any semblance of leadership nor interest in quelling unrest.  While Ms. Lightfoot did instinctively understand the height of mass protests presented her with an unmatched opportunity to deliver a series of feel-good comments and stand for photo-ops rather than to condemn criminal acts, her only palpable re-action to the turmoil which overtook Chicago in late May and into the beginning of June was to authorize the establishment of a panel, the Use of Force Working Group, to study police use-of-force policy.

A wholesale rejection of leadership, Ms. Lightfoot’s inability or refusal to act decisively or courageously during and following the passage of recent protests and an upturn in crime which occurred in Chicago caused her to miss opportunities to help a city which is in desperate need of leadership and order.  A deficit of leadership which did not go unnoticed by the White House, in a letter from President Trump addressed to Mayor Lightfoot and Governor J.B. Pritzker dated June 26, the Trump Administration expressed an eagerness to assist Lightfoot to battle the crime epidemic bedeviling Chicago.  There is nothing opaque in President Trump’s letter.  Opening his dispatch, the president mentions the “devastating violence” overtaking Chicago and his dismay with grim headlines revealing a macabre June death tally.  The numbers were staggering and shocking:  Between June 1-29, 458 people were shot and 84 have been killed.  Wince-inducing figures, over Father’s Day weekend alone an astonishing 104 persons were shot, and another 14 were victims of homicides.  Lamenting the absence of law and order in the country’s third-largest city, Trump continued to explain with intelligent care federal aid to Chicago under grants provided by the Department of Homeland Security, assistance to local law enforcement in part for recidivism programs from the Department of Justice, and, in a pointed reminder, noted Chicago received over $800 billion in Coronavirus relief.

Deploring assistance which came nowhere near yielding any meaningful results, Trump described a variety of measures his Administration has taken to improve the quality of life for minority communities, notably signing into law the First Step Act, passage of the Tax Cuts and Jobs Act of 2017, which established Opportunity Zones, aid to Historically Black Colleges and Universities, and an Executive Order reforming policing.  Nearing the conclusion of his correspondence, Trump made a personal appeal to Ms. Lightfoot to cast aside political differences and cultivate a relationship based on mutual cooperation with members of his Administration to develop a strategic anti-crime plan to benefit Chicago residents.

To begin, let’s specify President Trump’s letter does not contain the features of a Hallmark greeting card extolling the virtues of warmth or personal affection for Ms. Lightfoot.  In fact, the president’s note is characterized by a strong undercurrent of derision and customary Trump self-congratulation.  However, despite the standard Trump bluster, the president’s letter did concede the obvious:  Ms. Lightfoot’s deficit of leadership is allowing Chicago to crumble into lawlessness.  Though the facts in Trump’s letter did broadly support the assertions, instead of recognizing the caring vision and a sincere gesture offering assistance, Ms. Lightfoot gracelessly attacked Trump on Twitter, declaring with swagger his letter was “despicable, disgusting and all too typical.”  Lightfoot added immediately after she was not in need of “leadership lessons from Donald Trump.”

An unsurprising re-action from the machisma mayor, Lightfoot’s stridently partisan reply to an offer of assistance from the White House only confirms President Trump’s deep suspicions Ms. Lightfoot is failing terribly to uphold her responsibilities as mayor of Chicago.  Although the relationship between Lightfoot and President Trump is born out of a mutual distaste and widely differing political ideology, it is not uncommon for ideological opposites to set aside political disputes to achieve a common good.  A response to President Trump which should enrage all Chicago residents, there are several reasons why Ms. Lightfoot inelegantly rejected coordinating with the White House.  First, Lightfoot dismissed co-operation with President Trump over optics:   Lightfoot feared forming a partnership with the White House would make her appear weak and feeble.  A woman who covets the machisma image, declining assistance from the “bully” in the White House only boosts Lightfoot’s rugged public persona among her political peers and supporters.  Second, Ms. Lightfoot declined Trump’s assistance by virtue of the fact it would be viewed as a betrayal of the Progressive cause.  Although heedless and unnecessary antagonism directed at the White House is hardly desired behavior from a mayor presiding over a city in the throes of a crisis, for Lightfoot to league with President Trump would have been viewed as a betrayal of the Progressive cause and would have led to Lightfoot’s excommunication from the Progressive movement.

Ms. Lightfoot could have been principled and pleasant in her response to President Trump’s letter. However, by framing her response to outreach from the White House in explicitly partisan terms, Ms. Lightfoot provided valuable insight into the hubris of her leadership.  Though her reply to the White House revealed she was more concerned with avoiding any sign of weakness or apostasy, partisan anger is not a vision, policy or leadership.  A mayor more concerned with appearances and waging open war with President Trump than addressing the real concerns of Chicago residents, Ms. Lightfoot’s response squandered a unique and rare opportunity to unify in the face of a common enemy, violent crime.  Though President Trump’s letter only offered the mayor the occasion for a meeting to discuss Chicago’s intractable violence, there exists the possibility, however remote, productive discussions between Lightfoot and the White House could have yielded some federal aid to Chicago.  That Ms. Lightfoot instead chose to adopt her normal cantankerous posture and sought another exploitable partisan moment by assailing President Trump suggests the mayor is playing an undeniably dangerous and counterproductive role in Chicago’s fight against violent crime.

Since becoming mayor in 2019, as the threat of crime has metastasized, Ms. Lightfoot has dismissed the notion drastic action was required.  After June’s stupefying death toll, Chicago residents could have reasonably believed Ms. Lightfoot would have come to her senses, struck a different tone, and welcomed outside help even if she herself had been able to contrive a new or different anti-crime strategy.  However, those who mistakenly believed Ms. Lightfoot was capable of changing tack were ignoring everything we have come to learn from the mayor over the past year.  No fight against crime can be won and no crisis can be navigated without effective leadership.  Although the mayor keenly accepts annual aid packages from the federal government to Chicago and has thrown her arms around the federal government’s consent decree, Lightfoot’s response to Trump’s rejecting any dialogue with federal officials made clear the mayor is mistakenly abiding by an anti-crime strategy of diversions, which has no chance of succeeding in bringing crime to heel.  Sadly, because of this, Chicago residents are now at greater risk.

A city facing an extraordinary trial, to rally Chicago residents, the city requires a leader who can, first and foremost, face the crime problem.  Once the problem of crime is acknowledged, a leader articulates a vision to justify actions taken and explains the choices made.  Lightfoot’s failure to lead is neither rooted in the fact she refuses to pursue a tough anti-crime strategy nor regret for serious errors in crime policy, but rather having no anti-crime policy whatsoever.  Since taking office, in the absence of an anti-crime policy, Ms. Lightfoot has consistently resorted to a series of diversions to draw attention from out-of-control crime.  Though puerile name calling and profane remarks are her preferred weapon, Lightfoot also enjoys a mélange of labels, particularly racism and sexism or whatever “ism” is convenient, dehumanizing political enemies, and blaming violence on a “gun culture.”  Diversions to distract from the weekly horror of multiple homicides, Ms. Lightfoot’s most recent riffs to deflect from June’s grim crime statistics are turning up the volume on police reform and grand announcements of massive investment in crime-ridden enclaves on the South and West Sides of Chicago.  Pivots to shut down debate or parry criticism from the absence of a crime-fighting policy, instead of acknowledging her efforts had either failed or had been inadequate to the point the White House recognized the disaster and intervened with an offer of serious discussions to solve a grave problem, Ms. Lightfoot merely gave us more of the same garbled messages, intensified her rote calls for investment in high-crime enclaves, dismissing alternatives to police reform as pointless or defining assistance from the federal government as a cynical ploy to humiliate her.

Different anti-crime strategies can be weighed, and their relative strengths can be assessed both wisely and coldly. The problem, however, is Ms. Lightfoot remains doggedly loyal to diversions, bizarre ideas, and futile tactics which have failed to achieve any success in the fight against crime.

Lori Lightfoot was elected in large part because she convinced voters she possessed the moral courage and competence her predecessor Rahm Emanuel lacked.  Though some remain committed to the belief Ms. Lightfoot is a capable and talented enough mayor to resolve the mayhem on Chicago’s streets, a canny and wise politician interested in the welfare of residents would have disregarded politics and entered into conversation with and accepted guidance from the White House and used fruitful discussions as a pry bar to obtain federal dollars for the city.  Rather than take cues from surging crime rates or an empirical analysis of anti-crime strategies which have succeeded in the past, Lightfoot prefers diversions.  A refusal to be honest about the challenge posed by violent crime and to treat crime with a seriousness necessary to conquer it, Lightfoot favors deflections and obeying the slogans from vocal anti-police activists, all of whom dominate the crime conversation and have their own “solutions” for the violence overwhelming the city.

As the unorganized forces of crime gather strength for the July 4th weekend, Chicago needed a leader willing to put aside petty political squabbling and accept assistance from federal authorities for a matter beyond Ms. Lightfoot’s ability to solve.  Though President Trump’s offer did not promise a federal aid package, it did express a willingness to cooperate, to play a role in protecting the liberties of the law abiding, and presumably help Chicago take an important first step in restoring order to the city’s streets.  Ms. Lightfoot frittered all of this away for political reasons and billed it as a victory.

Lightfootism has already wrought disaster to Chicago.  Even if Chicago survives July 4 and Labor Day, more disasters are on the horizon.  The risk, of course, will be borne by Chicago residents.