Mayor Lightfoot's Choice for CPD Superintendent Will Define Her Term 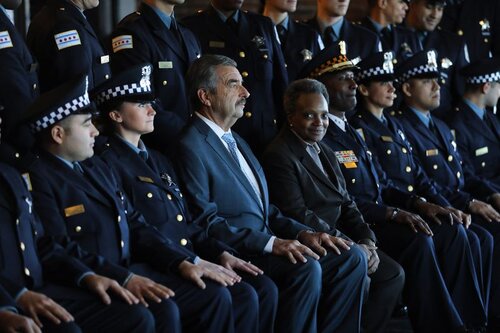 Will Lightfoot place a greater importance on politics or the safety and security of Chicago in search for next police superintendent?

It’s not official yet, but all the signals emanating from City Hall indicate Mayor Lori Lightfoot is prepared to announce three candidates under consideration by her office to become the next superintendent of police for the City of Chicago.  An announcement expected to come on March 18, the situation is far bleaker than many had previously imagined.  A vacancy created by Ms. Lightfoot’s abrupt decision to dismiss former superintendent Eddie Johnson in early December 2019, although the mayor specifically cited the former superintendent’s “false statements,” ethical lapses,” and “flawed decision-making,” Lightfoot insisted a “culture change” was necessary within the Chicago Police Department (CPD).

A decision which arrives as the Windy City wrestles with the growing threat of COVID-19, according to well-placed sources buried deep inside 121 North LaSalle, among the candidates Ms. Lightfoot is weighing naming is Ernest Cato III, who currently serves as Deputy Chief, Area North Patrol; Kristen Ziman, the chief of police for Aurora, Illinois; and David Brown, the former Dallas chief of police.  Candidates whose names should be greeted with a collective groan, those who are familiar with the recent past should know Lightfoot finds herself today in territory with which former mayor Rahm Emanuel is familiar.  To manage the fallout following the release of the Laquan McDonald video and ensure his re-election, Emanuel dismissed Garry McCarthy, blamed the tragic incident on the CPD, and breathed life into the fictional narrative a “code of silence” pervades the Department.  Fodder for the anti-police posse, Emanuel later enraged the Police Board by bypassing candidates it anointed to succeed McCarthy, Eugene Williams, Anne Kirkpatrick, and Dr. Cedrick Alexander, in favor of Eddie Johnson.  Mediocre choices, Williams faced powerful allegations he was instrumental in sharing sensitive testing material for a lieutenants exam, Kirkpatrick was regarded as an incredibly unseasoned law enforcement official and was recently fired from her position with the Oakland Police Department, and the reform-minded Alexander, though urbane, was considered more style than substance.

Although Emanuel’s two terms proved to be disastrous, the layabout former mayor’s decision to flout the Police Board implied the panel’s recommendations were indefensible and likely candidates who would be overmatched by the role.  As well, Emanuel’s decision to disregard the Police Board also suggests he was conscious of a surge in violence in 2016 and was more content with an insider leading the Department than handing the responsibility to an external hire unfamiliar with the city.  At the time of Johnson’s appointment, then-Police Board president, Lori Lightfoot, assailed the decision to circumvent the Board.  Now mayor, Ms. Lightfoot finds herself in the same unenviable position as Emanuel in 2016 but, unlike Emanuel, has pledged to adhere to selecting a candidate endorsed by the Board.  Confronted with a crucial decision to appoint a police superintendent as the proposed GAPA ordinance looms large, if Lightfoot is to avoid making a calamitous judgement over who will lead the department, it will be helpful to familiarize the public with the contenders for superintendent.

A long-time detective, Ernest Cato III is recognized for achieving an unexceptional score on the sergeant exam.  A merit promotee, Cato rebounded with a spectacular score on a lieutenant exam.  Miraculously, Cato’s class of newly promoted lieutenants included a leading scorer, who, as it happens, is betrothed to the Department’s former-First Deputy Superintendent.  A fortuity which can only be satisfactorily explained through a FOIA request, records obtained hinted Cato was tethered to one of the Department’s biggest scandals:  Eugene William’s shadowy study groups.  Dark-of-the-night seminars at which “connected” officers received complete copies of the rank-promotion exam, the disgrace forced Williams from consideration to succeed Garry McCarthy.  Equally worrisome, Mr. Cato has some personal flaws.  While we would be overjoyed to see a list of unflawed people, Mr. Cato’s failing is the sort which is certain to furrow a few brows at 121 North LaSalle.

An external candidate under consideration for superintendent is Aurora Chief of Police Kristen Ziman.  An Aurora native, Ziman has spent her entire career in a city which averages six homicides a year and in a city which most outside of Cook, DuPage, and Lake Counties would be unable to place on a map.  Named police chief in 2016, Ziman’s meteoric rise to be considered to lead the CPD rests almost entirely with the February 2019 mass shooting at the Henry Pratt Company.  An incident which claimed five lives and witnessed four Aurora officers injured, while Ziman handled media inquiries ably, for Chicago, a city which routinely suffers five homicides by midweek, Ziman’s experience is more suited for posting as a district commander in a district with low crime rates.  Despite her manifest lack of qualifications for the post, Ziman does however check two crucial boxes:  She is both a woman and openly gay.  Characteristics which would certainly pay homage to burning Progressive demands for diversity, tolerance, equity, and inclusion, none are related to either preparedness for leading 13,500 peace officers or the organizational and managerial skills required to guide the second largest urban law enforcement agency in the nation. Moreover, should Ms. Lightfoot anoint Ziman, the mayor had must be willing to sustain a torrent of criticism from more qualified and seasoned females inside the CPD.

Finally, Ms. Lightfoot is also considering naming former Dallas Police Chief David Brown.  While Brown deserves recognition for authorizing the deployment of a robot to end gunman Micah Xavier Johnson’s murderous spree which took the lives of five Dallas police officers in 2016, his 2010-2016 tenure was otherwise a failure.  Over his six-years as chief, Brown ushered in several police reform measures, including an ill-conceived foot-chase policy. Measures which scaled back expectations for police, a mass exodus in retirements and resignations from the department followed, as did demands for his ouster, and crime rose across all recorded categories in Big D.  In addition to introducing improvident policing policy, the bespectacled Brown was ridiculed for his response to the 2016 Dallas shooting at a memorial service for the victims.  In his brief address to attendees in mourning, Brown lamented his failure with girls as a teen and quoted Stevie Wonder’s pop hit “As” to preach love, ease suffering, and foster healing.  Though the speech was at times both touching and amusing, Chicago is in need of a leader in the fight against its crime epidemic, not a love shaman.

Mayor Lightfoot is at a crossroads and her decision to name the next police superintendent could define her term as mayor.  While all three candidates may boast some qualification and experience for superintendent, all three lack the necessary vision, insight and leadership qualities necessary to carry out the functions of the role of police superintendent.  The fact three unfit candidates are now under serious consideration should inspire the question why this has occurred.  One obvious answer is Ms. Lightfoot is prioritizing diversity over competence, but under the conditions Chicago Police officers perform their duties, it plainly observable no promising, accomplished candidate chose to seek the position.  Hiring a qualified candidate to lead an urban police department is challenging under any circumstance.  However, in a city with the excessive burden of police oversight such as COPA, the Police Board, a ravenous and influential anti-police movement, a consent decree, and crippling restrictions placed on peace officers, it is logical to surmise no well-qualified candidate found Chicago’s police superintendent position appealing.

It’s Mayor Lightfoot’s city and her decision.  If Ms. Lightfoot is prioritizing diversity over talent, Chicago will be forced to embrace Cato, Ziman or Brown and sustain a rise in crime.  If the mayor exercises bold and principled leadership, the safest alternative is to extend Charlie Beck’s interim stay indefinitely and reboot the search for a new superintendent.