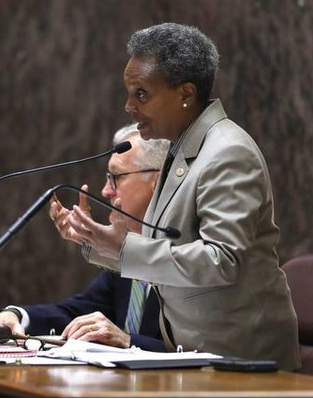 For what the heart thinks, the tongue speaks.

If a few days are a long time in Chicago politics, then the last two months has felt like an age. In an incident on July 24 which is raising eyebrows, Mayor Lori Lightfoot referred to a Fraternal Order of Police (FOP) official as a “clown” while presiding over a session of the Chicago City Council. The Windy City’s version of the Politburo, this once-dignified chamber has witnessed several stirring moments in its pocked history, including a former member brandishing a pistol on the floor, but never has a sitting mayor publicly humiliated a police union official. The trouble all began prior to the beginning of the day’s session when, during a brief interlude between speakers, Lightfoot observed FOP Second Vice-President Patrick Murray nearing the mic to address attendees, the mayor, and aldermen. As Murray approached the stand, Lightfoot expressed exasperation, and with a snide and disrespectful tone said into an open mic: “Oh, back again….this is this FOP clown.”

A moment of civic irresponsibility in which Lightfoot revealed her bone-deep and all-consuming animosity with Chicago police officers, the mayor appeared unrepentant when greeting her media handmaidens following the conclusion of the day’s legislative affairs. Speaking from the Ivory Tower with remarkable hubris, when confronted with questions over the kerfuffle, Lightfoot merely shrugged off the remark and disingenuously told reporters she regretted “saying it out loud.” Hardly a gesture which lowers the temperature in the overheated relationship she shares with the police union, Lightfoot displayed a similar truculence the following day during an appearance on Chicago Tonight. All gas and no breaks, when Lightfoot was asked by host Paris Schutz (15:15 mark) whether she felt remorse for the utterance, Lightfoot, again, declined to convey any inner appearance of lament by replying the comment was “inappropriate” and should not have been said “out loud.” Pressing Lightfoot over frankness, Schutz asked if her use of “out loud” comprised an apology, to which Chicago’s machisma mayor simply segued into a brief rant over the state of perpetual agitation between herself and the FOP and vomited up the stagnant line she is committed to working with the police union.

Lightfoot’s remark was not carelessness or error, but a deliberate act of aggression.

While it is tempting to define the mayor’s “hot mic” moment as the sort of minor gaffe or verbal stumble which occasionally plagues elected officials, Lightfoot’s remark was by no means a manic or confused moment, but rather an arrogant slight explicitly premeditated, carefully orchestrated, and intended to provoke an incident. A ploy executed with precision, there is a mass of evidence to demonstrate Lightfoot’s shameful comment was intentional. A woman who knows where, when, and how to pick her targets, Lightfoot has invested considerable time and vigor throwing hooks and jabs at police since taking office. Upon inauguration, Lightfoot broke tradition and revealed the hire of a former U.S. marshal to lead her security detail, and days later appeared on Chicago Newsroom to revive the utterly groundless but oft-repeated fiction the FOP instructed members to flout their sworn duty on Memorial Day weekend. Less than one week later, Lightfoot rolled out “Accountability Monday” meetings to consult with top police officials. An artless maneuver to shift blame for the savagery consuming the city away from her office, Lightfoot’s unique purpose is to create a weekly vehicle to routinely frame the police department as the fall guy for the utterly chaotic conditions on Chicago’s streets. Shortly after, in another cynical stunt, Lightfoot publicly flogged detectives for allegedly failing to engage in proactive policing, and followed this ruse with a harsh denunciation of police for “losing the streets” after another grisly July weekend death toll. A remarkably consistent woman, the linear tale of ritual condemnation of police since becoming mayor illustrates how Lightfoot saw the floor of the City Council on July 24 the perfect backdrop to level further abuse at police by jeering Mr. Murray.

As indefensible as Lightfoot’s remark was, her failure to demonstrate earnest remorse in the wake of her stunt in the City Council was inexcusable. Although the mayor had sufficient opportunity with reporters to admit wrongdoing fully and publicly, Lightfoot seemed liberated of any regret or disquietude at every juncture when addressing her abuse at Mr. Murray. Instead of wearing a hangdog face or eagerly acknowledging her behavior was wholly inappropriate, with drab tone and dispassionate style Lightfoot stubbornly refused to provide a full retraction and offered only a faint apology by repeatedly punctuating her statements on the incident with “out loud.” Hardly an expression of genuine remorse, the standard proof for her lack of contrition for casting scorn at Mr. Murray and police is found with the pleased-with-herself look plastered on her face when questioned over the incident by Chicago’s lazy media.

Mayor Lightfoot’s behavior amounts to a dereliction of duty to posture and tradition.

Dirty tricks are nothing new in Chicago politics, but Lightfoot’s subterfuge in the City Council broke new ground. While Lightfoot is not the first mayor to vilify police, her ungracious conduct evokes memories of former mayor Rahm Emanuel, who did more to dismantle police supremacy over the streets than any of his predecessors by bolstering the myth of a police “code of silence” in a 2015 speech in the City Council in the wake of the 2014 shooting death of an armed teen, Laquan McDonald. Although Emanuel’s speech had a disastrous impact on police morale and crippled police authority on the streets, his comments had an immediate political utility: Emanuel was fighting to salvage his political career. In contrast, Ms. Lightfoot’s remark on the City Council floor smacks of a revulsion for police we have come to associate with the mayor since she assumed office. This is who she is and this is how she intends to govern.

By choosing the floor of the City Council to deride Mr. Murray, Lightfoot discarded both common and parliamentary decency to exact revenge on police. As mayor of the third-largest city in the country, Ms. Lightfoot has a first and most-urgent obligation to conduct herself with the upmost tact and personal discipline. As chief executive of this city, Lightfoot similarly has a responsibility to calmly, soberly, and intelligently advance arguments to solve Chicago’s problems. Sadly, Lightfoot’s comments offered an unblemished vista into her soul and revealed a woman with Hell in her eyes. A comment she planned in advance to deliver, Ms. Lightfoot’s behavior on the floor of the City Council sends a powerful message there is no space, public or private, in which she will not take the opportunity to assail police officers; she is uninterested in civil discussion on policing matters; and she is satisfied she no longer has to keep secret her loathing for police.

All of this, of course, occurred in the last two months. Just imagine what Lightfoot has in store for police over the next four years.