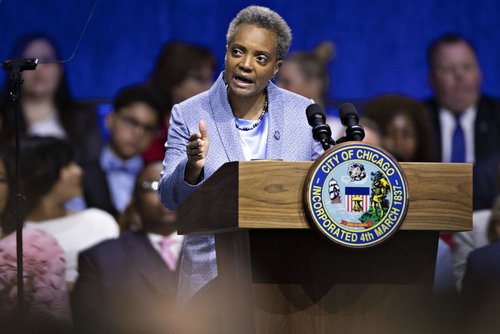 The more things change, the more they remain the same.

Of the few moments worth re-visiting from Mayor Lightfoot’s first months in office, an August 23 announcement her administration would impose a citywide hiring freeze is not among them. Although Ms. Lightfoot failed to mention the new policy initiative in a self-indulgent speech at Kenwood Academy on August 28, the following day in her grand splash State of the City address, Lightfoot touted the principle as part of her determination to sweep aside Chicago’s old political debris. Despite campaigning as an anti-machine wrecking ball and her pious rhetoric since assuming office, in a deeply-troubling gesture in late September, Lightfoot’s office revealed the hire of former 45th Ward alderman John Arena to the position of senior adviser with the city’s Department of Planning and Development (DPD). A role in which the banished alderman will earn a princely sum of $123,996, in announcing the hire, Lightfoot’s spokeswoman, Anel Ruiz, said:

“John Arena has spent the better part of the last decade advocating for smart city planning that drives investment and creates new opportunities for the residents of this city. The administration is confident that his experience with complex, local community development issues will make him an asset to DPD and incoming Commissioner (Maurice) Cox.”

Of all the missteps and unwise decisions in the earliest stages of Lightfoot’s term as mayor — the uncalled-for public censure of police, the extravagant travel for the purpose of fundraising, deliberately insulting a police union official on the floor of the City Council, and the refusal to cooperate with federal immigration officials — the hiring of John Arena may well turn out to be the worst of all. While hiring competent people to serve Chicago is well and good, John Arena’s hire is not, by any yardstick, a sensible decision. According to a 2011 candidate biography published in the Chicago Tribune during his bid to represent the 45th Ward in the city’s legislative chamber, Mr. Arena graduated in 1990 with a Bachelor of Fine Arts degree from Northern Illinois University. Hardly ideal training for a position in urban planning, in the same Tribune candidate resume Arena’s work experience reveals a six-year employment gap between 1990 and 1996, a position with Frankel Brand Marketing from 1996–2001, and lists Arena as the owner of Arena Design & Illustration. While all able workers have gaps in their employment history, a six-year period is, well, suspect. Moreover, very little evidence exists to verify Arena Design & Illustration, a firm of which Arena claimed then to be proprietor, resides anywhere except inside a payphone booth or in Mr. Arena’s mind.

Although the statement from Ms. Lightfoot’s office hypes Arena as impressively endowed to contribute at DPD, the missive specifies up front advocacy is the former alderman strongest professional attribute uniquely suiting him for the position. As Ms. Lightfoot stumbles through her first months in office, it may be helpful to remind her advocacy is not a substitute for either skill or experience, and Mr. Arena is not a man familiar with the fine art of gentlemanly advocacy. In addition to the fact Ms. Lightfoot may be confusing advocacy with skill and experience, it may also benefit the new mayor if we jog her memory with regard to the latter part of Mr. Arena’s final term in the Chicago City Council.

A period marked by sheer chaos in the 45th Ward he represented, in a series of turbulent events provoked by Arena in early 2017, the former alderman rolled out a proposal to develop a seven-story residential building on the site of a vacant lot at 5150 North Northwest Highway. When objections were raised by residents over the building’s height, neighborhood density, and overcrowded schools, rather than demonstrating the virtues of an experienced politician and a mature leader by tolerating opposing views or the opinions of critics, Arena engaged in the politics of grievance and deployed scorched-earth tactics against constituents with abandon. As opposition from residents to the development plan intensified, Arena counterpunched and often below the belt. In a string of despicable incidents in which Arena addressed the matter in public or on social media, the former alderman revealed a truculent side of his nature, reduced the conversation to shouting matches, falsely depicted opposition to his development plan as primal screams from bigoted cranks, and painted an unsettling portrait of the 45th Ward as hopelessly and intractably racist. In one final attempted blow to bring the neighborhood to heel, Arena retaliated to dissension to his housing plan by filing manifestly false complaints with the city alleging racism among police officers and firefighters residing in the ward. A disgrace which should never be forgotten or entirely forgiven, Mr. Arena has declined any outward expression of penance for his unbridled hysterics.

Over and above his fire-breathing hectoring of residents, Mr. Arena will also bring some ethical baggage with him to his new position with the City of Chicago. Although much of the affordable housing controversy Mr. Arena invited into Jefferson Park was played out in public, some of his advocacy was behind a curtain and remains unexplained. To achieve his vision of a Progressive utopia in the 45th Ward, Arena meddled in LSC Development’s work progress at 5150 North Northwest Highway by slyly re-zoning 5140–5190 North Northwest Highway to B1–1 (Neighborhood Shopping) from M1–1. Shortly after, LSC was informed its work permits were invalid despite the fact the building maintained a M1–1 zoning designation at the time of issue. This led to LSC Development suing the City of Chicago and Commissioner of the Department of Buildings, Judith Frydland, and a six-month legal battle followed. In addition to his re-zoning gambit, Arena has accepted campaign donations from several area developers, including one with a shady reputation, Charles Cui, who is embroiled in a federal bribery probe and who feathered Arena’s campaign coffer with $17,000 in election funds.

John Arena deserved to be written off.

Mayor Lori Lightfoot has a problem, and it is grounded in credibility. A woman who sought office posing as a completely heterodox politician determined to not only upend but undo decades of Democratic machine politics, Lightfoot’s appointment of John Arena to the DPD is the glory of the machine system. Although Ms. Lightfoot attempted to portray Arena’s background in glowing terms by stating his advocacy for affordable housing in the city’s legislative chamber is a great asset to his job with the DPD as it lends to his supposed experience and gravitas, this was merely a smokescreen. A man of mediocre qualifications, although Arena was almost certainly hired to ensure he would meet the minimum ten-year-eligibility requirement to collect a generous city pension, a plausible motive for his hire may rest with the fact Arena has the right Progressive policy credentials and embodies all the personal features of the Progressive Left’s political identity. With aldermanic prerogative reined in, a circumstance which could feasibly enhance the power of DPD, a more appropriate title for Arena at DPD would be senior political adviser in charge of ramming through Ms. Lightfoot’s housing preferences.

But by appointing Arena to the DPD, the mayor is creating a problem with confidence in her leadership:  Lightfoot is revealing her tolerance with Arena’s uncompromisingly confrontational tactics.  A man who tends to go off like a firecracker, Arena’s incendiary comments, his treatment of 45th Ward residents, and calamitous handling of his affordable housing plan in Jefferson Park should have naturally disqualified him from any further employment with the City of Chicago.  That Ms. Lightfoot overlooked the bitter, two-year ordeal 45th Ward residents suffered at Mr. Arena’s hands is consonant to glorifying and rewarding the former alderman for both his Progressive zealotry and being a nasty partisan brawler.

While John Arena’s tenure in the City Council has come to an end and we should celebrate its passing, his troubling legacy will endure with a plum position in the Department of Planning and Development.