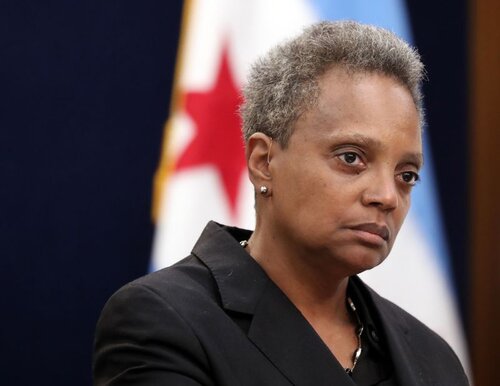 If website shaming aldermen is the mayor’s best instinct, we would hate to see her worst.

Whether Mayor Lori Lightfoot finished 2019 triumphantly is a matter of debate.  To her supporters, she is the very heterodox politician who satisfied the clamoring for reform; others, however, fumed over what they considered were opportunities lost by the new mayor.  To bring 2019 to a close, Lightfoot survived an embarrassing Chicago Teachers Union (CTU) strike, dismissed the police superintendent, and violence persisted at the usual rate.  Yet as the curtain comes down on 2019, if there is any victory to which Lightfoot could claim, she would have us believe her biggest achievement was passage of the 2020 budget.

A fiscal plan of which sufficient support always existed in the Chicago City Council, Lightfoot’s ridiculous contention she furnished a balanced budget ignores the fact her plan places an inordinate amount of faith on unsettled assistance from Springfield, and vague assurances her administration will demonstrate fiscal responsibility.  A hideous and multifarious budget, the specter of municipal pensions remains gloomy, and the fate of what is expected to provide Chicago with additional revenue, a casino, is uncertain.  Although Ms. Lightfoot inherited the $838-million deficit and Chicago’s fiscal insanity can be traced back well over a decade, the cost associated with her refusal to impose necessary structural reforms in her first budget, and overreliance on one-time fixes comes in the form of her administration’s projection the Windy City will face deficits in excess of one-billion dollars in each of the next two fiscal years.  None of this, of course, will stop Lightfoot from proclaiming her budget fair or the sensible thing to do.

Shortly after the plan passed 39-11 in the City Council, while celebrating the success of her budgetary tricks, Lightfoot addressed the media.  Taking questions from journalists determined to elicit a reaction to 11 votes against the budget, Lightfoot, away from City Council cacophony, with finger raised, touted the victory by citing the memory of Harold Washington.  Shrugging off the fact 11 aldermen declined to throw support behind her budget, including all six members of the Democratic Socialist caucus, Lightfoot gleefully told reporters she intended to enjoy her first budget victory with a splash of scotch and a fine cigar.

However, if there is any insight gained from Chicago’s first budget debate under Ms. Lightfoot, it is the machisma mayor has little tolerance for disloyalty.  Not long after the budget passed on November 26, the political action committee supporting the mayor, Light PAC, flipped a switch activating a website unabashedly devoted to publicly humiliating and discrediting aldermen who opposed the 2020 budget.

While short of a declaration of war on aldermen who rose in opposition to her budget, the creation of chicagobudgetvotes.com is Ms. Lightfoot’s method of publicly expressing rage at aldermen she considers, in effect, of being arch-betraying Judases.

A website which vaguely resembles President Nixon’s “enemies list,” although Light PAC does not use the machinery of city government to menace aldermen, celebrities, business executives or organizations, the sole purpose of the website is to collectively shame dissenting aldermen into behavior of which the mayor approves.  While the website could also serve as a vehicle Lightfoot allies devised to avoid confronting criticism of the mayor’s budget, the mere fact it exists, evidently with the mayor’s approval, reveals a great deal about Ms. Lightfoot.  Principally, it demonstrates Lightfoot does not take criticism well and refuses to be questioned or challenged.  Lethal traits in a leader, the website similarly illustrates her inferior political skill.  Instead of engaging aldermen with whom she has honest policy disagreements with kittenish charm, Lightfoot cast aside attempts to convert skeptical aldermen and delighted in publicly demeaning the 11 lawmakers.  In addition to the merriment she finds in denigrating city council members, yet another example of her inclination to openly ridicule others, in a series of incidents after assuming office, Lightfoot publicly and unjustly lambasted police detectives in June and again assailed police for “losing the streets” in July.  Not long after, Lightfoot berated Rabbi Michael Ben Yosef, who, from the floor of the city’s legislative chamber, appealed for her undivided attention as he called for the mayor to take action on the murderous violence on Chicago’s streets.  Moments later, Lightfoot, in a deliberate attempt, mocked police union official Patrick Murray, referring to him on a hot microphone as a “clown” as he prepared to deliver remarks to the assembly.

A woman with a history of carrying out petty reprisals, if Lightfoot’s behavior is simply a strategy, it is remarkably short-sighted and parochial, and one which could cost her support from within the Democratic Socialist caucus in the City Council.  While few would be inconsolable with grief with the notion of Democratic Socialists suffering legislative defeats, if, on the other hand, Lightfoot’s desire to insult others is a feature of her personality, it demonstrates a profound lack of personal and professional grace, and narcissism.  Regardless of which category Lightfoot falls within, it should strike Chicago residents as odd the highest-ranking official in the city is keeping an enemies list when, in fact, the mayor has the great responsibility to tend to city affairs.