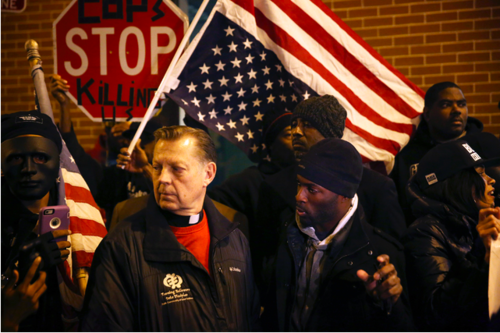 For crime and misery to recede on the South and West sides, Chicago police must lead the way.

The details are maddingly vague and the “hows” are every bit as hazy, but neither of these facts discouraged Michael Pfleger from penning his guest opinion piece on August 7. While Pfleger’s imprecision has never hindered him in the past, the brainstorming Saint Sabina’s senior pastor offered in the editorial pages of the Chicago Sun Times is unlikely to achieve any of its stated goals, and has the potential to harm.

Under the deceptive headline “How to encourage more Chicagoans to work with the police to solve murders,” Pfleger’s stirring call to end gun violence quickly forsakes attention on guns, violence, and assistance with police to urge the mayor and City Council to set the same budgetary priorities on the decaying South and West sides the city placed on development projects which revitalized the West and South Loop and Lincoln Yards. While lamenting urban rot and degradation, Pfleger observes residents in high-crime areas refuse cooperation with police over concerns for their personal safety and mistrust with police officers. To mitigate these circumstances, Pfleger submits a notion which challenges Chicago’s corporate structure, institutions of faith, civic leadership, and private citizens to jointly create an honorarium fund to compensate those who furnish police with information which leads to an arrest in a crime. To entice residents to assist police inquiries, Pfleger’s lovely touch also involves a city-run witness protection program, backed by Section 8 vouchers with the option of re-location from Chicago.

If South or West Side residents don’t have faith in Chicago police, a measure of blame should fall on Pfleger.

In order to paint a fair portrait of Pfleger and his impact on his flock, it is of paramount importance to recognize his accomplishments as senior pastor at Saint Sabina. Since arriving in 1981 at the parish named in honor of an indomitable Roman widow martyred for her faith, Michael Pfleger has, at times, undertaken the general Catholic mission to rescue the vulnerable quite admirably. With full vigor and right good will, Pfleger has successfully used spirituality to offer relief to those in the throes of crippling poverty, redeem those locked in the abusive relationship with drugs or living a life besieged by alcohol, and liberate young men confined by gang affiliation. Additionally, Pfleger has been on point in his past denunciations over discrimination in housing and hiring practices in Chicago. Other actions in good faith include Pfleger creating space inside his parish to accommodate elderly tenants, the establishment of a food pantry for parishioners, assisting parishioners in the search for employment, and the development of relationships with private donors to fund some after-school programs for at-risk children. During his service at Saint Sabina, one of Pfleger’s most notable contributions has been his dogged campaign against guns, alcohol, drugs, and rap music. For decades, Pfleger has nobly waged a war on rap music which celebrates violence or dismisses women as mere sexual objects, and against those who sell or glorify the use of guns, tobacco, and alcohol by marking businesses or billboards which deal in or promote firearms or drug paraphernalia for protest.

Nonetheless, before we submit Pfleger’s name to the Vatican’s Congregation for the Causes of Saints for consideration for canonization, it would be helpful to recognize how Pfleger’s methods have occasionally been antithetical to Judeo-Christian precepts. A man who has always appeared to presume he should enjoy immunity from criticism because he is an ordained priest, Pfleger has some serious personal shortcomings, one of which is directly connected to the erosion of police authority on Chicago’s streets. While his association with poisonous figures such as Louis Farrakhan, his invitations to speak at Saint Sabina extended to figures whose political persuasions conflict with Church doctrine, and his bizarre homilies in which he rollicks uncontrollably as if suffering an epileptic seizure are well documented, Pfleger’s cocksure article utterly ignores the first step in fixing the mess on the South and West sides is not vast amounts of city money, but police restoring order on the streets. Despite being provided with space in the editorial pages of one of Chicago’s most widely-read (albeit awful) newspapers, Pfleger neither personally applauds Chicago police nor does he wield any of his considerable influence over minority communities to encourage support for or cooperate with police. A habit of his, Pfleger’s commentary in the Sun Times follows over a decade of unyielding criticism of police, the last five of which can be accurately described as the turbo-mouthed cleric carrying out a low-grade campaign of insurgency against the Chicago Police Department and law enforcement personnel nationwide.

After the 2014 deaths of Michael Brown in Saint Louis, Missouri, and Eric Garner in New York City, Pfleger ignored the need for a sober investigation to resolve both incidents, preferring to bandwagon with local anti-police activists who assailed police in both cities. Shortly after the death of Brown, Pfleger, while conducting a liturgy, allowed Saint Sabina parishioners to hold a moment of silence in which congregants struck the purely fictional “hands up, don’t shoot” pose. Months later, after grand juries in both Ferguson and New York established police were justified in their actions, Pfleger cast aside both decisions in his homily to scold police and encourage worshipers to take to the streets in protest. Refusing to cease his criticism of police, as recently as November 2018, Pfleger re-emerged at the beginning of a trial of three police officers accused of conspiracy to demand police reform and repeat the canard of a police “code of silence.” Not long after, following Cook County State’s Attorney Kim Foxx inexplicably dropping disorderly conduct charges against B-list actor Jussie Smollett, Pfleger stood side by side with members of Chicago’s anti-police posse at an April 1 rally at First United Methodist Church and with casual aplomb described police as a mendacious cabal of jackals to renew the falsehood of a police conspiracy surrounding the shooting death of an armed Laquan McDonald. During the same appearance, Pfleger intensified his attacks on police by bitterly denouncing the sentence imposed on Van Dyke as lenient, and bemoaning a judge’s decision to acquit three police officers falsely accused of treachery in the McDonald incident. Comments which parallel bearing false witness, an act frowned upon by the Church, Pfleger’s rebuke of police overlooked the fact dash-cam video capturing McDonald’s death was preserved by police officers and turned over to police investigators. Pfleger’s remarks also scoffed at the fact a judge in the “cover-up” trial ruled no conspiracy took place.

Regrettably, Pfleger’s choice to stand with anti-police activists and adopt their venomous language is not his only failing. As inexcusable as it is for Pfleger to routinely eviscerate police, it is equally appalling he persists in encouraging parishioners to place unflappable confidence in the city of Chicago to lessen the devastating effects of poverty. A false dawn, while his effort to free those confined to poverty is virtuous, and Pfleger rightly points out both the South and West sides of the city continue to suffer terribly, his commentary in the Sun Times attempting to convince readers that city “resources” are the acorn which will sprout a giant oak tree of prosperity declines to debate the merits and efficacy of his proposed solution. A highly debatable way out of poverty, not only does Pfleger give both his flock and readers the impression the South and West sides are only one city investment away from the precipice of an urban renaissance in which employment will blossom and crime miraculously vanish, but it places an undue amount of trust and hope in a manifestly flawed and frequently inefficient institution, city government. Moreover, Pfleger’s belief a cash reward to foster cooperation with police bears an awkward resemblance to bribery, would further marginalize police, and overlooks a similar plan practiced in San Francisco, which directly led to a false imprisonment.

It’s time for Pfleger to start acting like a Catholic priest.

Michael Pfleger probably missed his calling. Taking into consideration his conduct during his 40 years at Saint Sabina, much of how Pfleger has behaved indicates he sees himself as an activist liberal priest in the mold of Massachusetts’ Reverend Robert Drinan and Wisconsin’s Reverend Robert John Cornell, both of whom briefly held seats in the U.S. House. Denied public office by Canon 285 forbidding clergy from the exercise of civil power, Pfleger has spent almost his entire career chafing at boundaries and limits imposed by the Church, often stretching or re-drawing sacrosanct lines to take action on social matters declared by the Church to be off limits to clergy. While his crusade against drugs, alcohol, or rap music is praiseworthy, his trespassing over the law, arrests for defacing personal property and disorderly conduct, repeated calls for parishioners to political action, and his endless feel-good “stop-the-violence” marches to achieve goals is an illogic which is discomforting. Furthermore, it suggests he has turned faith into a crude instrument to advance his personal political agenda. When carefully weighing his attitudes toward Chicago police specifically, Pfleger’s demeanor reveals his inclination to be a mercenary leading a popular uprising against police authority and a pipe organ for Chicago’s anti-police posse. Worse, while Progressives who control the levers of power in Chicago spent the city into disaster with free housing and health care, residents fled, crime soared, and Pfleger’s commentary called for the same failed prescriptions which promote an unhealthy dependence on government.

Spiritual life needs to be primarily about achieving the common good. Of the 66 separate books which constitute the Hebrew Bible and the New Testament, there exist untold verses covering grace, self-control, forbearance, self-sacrifice, and love. If the Good Book has any meaning to Pfleger, he is best serving his parish by reeling in his arrogant overreach, ridding himself of the kente-patterned vestments and “justice” t-shirts, and returning to the traditional garb which distinguishes a Catholic priest. To be a powerful force for good for his parish, Pfleger should withdraw from the streets and politics, burn his collection of Alinsky books, return to ministering to his parishioners, and address his congregation in ways which are more uplifting, self-reflective, and generous in spirit. Since talking is what Pfleger does best, he may want to devote his next overcaffeinated homily to the value of faithful obedience to Church and state authority and the preservation of the nuclear family as a bulwark against a life of crime and violence.