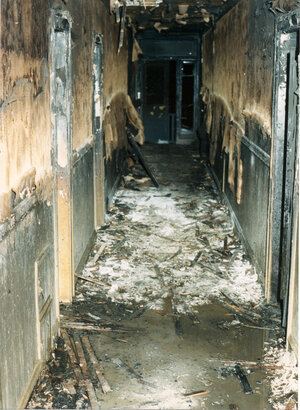 In yet another sign of radicalism and a kind of dissociative disorder reverberating among college-educated youth, students at DePaul University recently called for the school to cease educational programs for members of the Chicago Police Department.

“Kaitlyn Madden, one of the head tutors, said some of her colleagues were assigned to help a class in which FOP members were enrolled. She said none complained about anything untoward happening with the police officers, but after Shealey aired her concerns, others were troubled to learn of the FOP program’s existence.”

“A lot of our tutors are people of color and don’t feel comfortable (assisting police officers), she said.  The general consensus was not feeling comfortable with people that make them feel unsafe and are part of a larger institution that upholds racist and white supremacist values.”

With students relentlessly “protesting,” a euphemism for participating in or condoning rioting, vandalism, and other lawbreaking, such claims as this call to question just what is going on in higher education. This is particularly the case at DePaul, for the school is at the epicenter of a case in which detectives may very well be falsely accused of framing a man for a mass murder, a case that could reveal a dark reality completely contradicting the claims of these students.

To understand it, one must know some background, particularly among two key players.

One is a journalist named John Conroy, who spearheaded the attacks on alleged coerced confessions, mostly against former Commander Jon Burge, while Conroy worked at the Chicago Reader. Later, Conroy wrote for the Better Government Association (BGA), another left-leaning media publication.

While at the BGA, Conroy authored articles about a man named Madison Hobley. In his articles, Conroy presented a complicated theory that Hobley was innocent of a 1987 arson on the south side that killed seven people, including his own wife and child, one of the worst crime scenes detectives had ever seen.

The fire originated from gas that had been poured outside Hobley’s apartment door, then down the stairs to the front door. The stairwell created a chimney effect, pouring intense smoke and heat to the top floors in moments. Many residents were forced to jump from the upper floors and suffered disabling injuries.

In his articles, Conroy laid out the theory that Hobley was framed for the murders, even though he twice confessed, and even though there were key witnesses who said they saw him purchase a can of gasoline from a corner gas station, then walk back in the direction of where the fire took place shortly before the fire started. Some witnesses told detectives they observed that Hobley never went to the window of his own apartment to help his wife and child, but he helped others escape the flames. Confronted at his mother’s house by detectives who were surprised that Hobley had survived the fire while his wife and child didn’t, Hobley’s varying explanations were rejected by fire investigators.

Nevertheless, Conroy’s theory about Hobley being innocent was tied in large part to the fact that some of the detectives who worked the case had also worked under Jon Burge.

Another key figure in the Hobley case was a professor at DePaul, Andrea Lyon, who represented Hobley on the claim that he was wrongfully convicted. Conroy gave a lot of ink to Lyon’s claims about Hobley being innocent, though Conroy was never able to explain how so many detectives, scattered around hospitals, the crime scene, the homes of family members who had lost loved ones in the inferno, could get together and concoct a false theory that all of them would stick to in the coming years. More so, Lyon and Conroy could not explain very well why the detectives would pin the case on a man they didn’t know who had just lost his own wife and child.

Lyon’s theories, echoed by Conroy, didn’t go very far in the courts. In fact, making claims that Hobley was innocent never went anywhere, save for a bizarre theory that a gas can found the day after the fire was planted by the detectives. After two years of one theory after another about the significance of the gas can, the judge rejected overturning Hobley’s conviction. No legal proceeding of any kind indicated Hobley’s innocence.

Tellingly, one monumental event in the Hobley case was never cited by Conroy, Lyon or any other media outlet. A few weeks before Hobley’s wife and child were set on fire, along with five other people, two police officers were called to the home of Patricia Phiefer on the south side. One of the officers was a rookie named Glenn Evans. Phiefer showed Evans and his partner that an offender had thrown a brick through her window, and she wanted a report. The woman told the officers she believed the offender was a man named Madison Hobley.

Hobley had thrown the brick through her window because Pheifer was housing Hobley’s wife and child, Pheifer told the police. Hobley’s wife, Anita, had separated from Hobley after she learned Hobley was having an affair. Hobley—who had no criminal history—was irate about his wife leaving. He demanded that she return home. Hobley had been regularly calling Phiefer’s home and making threats.

Sure enough, while Evans and his partner were writing out their report, the phone rang. Pheifer told the two officers it was likely Hobley calling, making threats again.

Officer Evans picked up a second phone and listened in on the call. He heard Hobley make threats. Evans heard Hobley say he was going to burn down Phiefer’s apartment.

Evans, struck by the intensity of Hobley’s threats, became concerned. He documented the threat of arson in his case report. He also took the trouble to write out a report to his supervisors, letting them know he was concerned that Hobley’s threats of arson were sincere. So just a few weeks before the arson, Hobley was documented making arson threats against his own wife.

One wonders how this key fact in the case never rose to the surface in media coverage of Hobley’s innocence claims, for what would the chances be that Hobley would make arson threats against his wife and then a few weeks later she would die in an arson? Who could cover Hobley’s exoneration claims without putting a spotlight on this event documented in a police report?

Hobley’s case emerged at a crucial time in the city when exoneration claims were transferred from the courts to the court of public opinion, closely guarded by a media deeply sympathetic to claims like Hobley’s, so much so that a unique mythology about police misconduct was taking shape, a mythology embraced by so many students like those at De Paul calling for police to be banned from classes at the school.

What gave this mythology great weight was a similar case from Northwestern University’s Medill School of Journalism, headed by former professor David Protess. Protess oversaw the exoneration of Anthony Porter for a 1982 double murder, given legitimacy from a bizarre confession Protess and his team obtained from another African American man, Alstory Simon. With Simon’s 1999 confession, Porter got out and Simon went in to prison.

But alas, Lyon and Conroy were unable to convince the courts of Hobley’s innocence. They had no alternate suspect confessing to the crime, as Protess and his team did in the Porter case.

Not to fear. Around the time Lyon and Conroy were peddling the claim that Hobley was innocent, Governor George Ryan was facing a 21-count indictment for corruption when he served as Secretary of State. He was accused of selling licenses for campaign cash. He was looking at going to jail.

Ryan underwent a profound epiphany. He became an impassioned advocate to address police misconduct and wrongful convictions. The culmination of his transformation took place in a 2003 speech at De Paul in which Ryan cited the Porter case as a seminal influence upon his thinking, Ryan announced he was freeing four men from death row on the claims that they were the victim of police coercion. One of the men Ryan set free was Madison Hobley. Ryan’s decision infuriated prosecutors, who pointed out that such decisions should be made by the courts, especially when no new evidence emerged to indicate their innocence.

“Richard A. Devine, the Cook County state's attorney, issued a statement this afternoon calling the pardons ''outrageous and unconscionable.''

''These cases against these men are still before our courts, and it is the courts that should decide the issues in these cases,'' Mr. Devine said, referring to pending appeals. ''By his actions today the governor has breached faith with the memory of the dead victims, their families and the people he was elected to serve.''

Devine didn’t understand what Ryan’s decision signified. It meant that the alliance of the media, academics, and corrupt elected officials were running the justice system in Chicago, not law enforcement, the courts, or juries.

Fasten your seatbelts, because it gets worse. It always gets worse in Chicago. When Ryan went on trial for the corruption charges against him, he had an attorney working for him pro bono. That attorney? Andrea Lyon, Madison Hobley’s attorney.

How bout that? The overwhelming imagery of quid pro quo emerging from Ryan letting out Lyon’s client and then Lyon representing Ryan for free could not be denied by even the greatest apologists for the exoneration industry, an industry given new life by Ryan’s release of Hobley.

Even Eric Zorn of the Chicago Tribune pointed out the “troubling” appearances:

“Lyon bristled at the suggestion of payback and, as I reported, said this was "absolutely not" the case…Appearances, however, remain troubling.”

As “troubling” as these appearances were, neither Zorn nor any other media outlet, including Conroy, ever took up the journalistic obligation to get to the bottom of these troubling appearances. Even when, a decade later, prosecutors, citing what they called potential constitutional violations in the manner by which Northwestern investigators, led by Protess, obtained Simon’s confession to the Porter case, dropped charges against Simon, releasing him from prison after 16 years.

What is “troubling” about the Hobley case is not simply Lyon representing Hobley, then representing Ryan pro bono after Hobley was set free. It’s the functioning, or not functioning, of three crucial institutions: Higher education, the media, and the political system, and the troubling appearances of collusion among all three.

As such, the Hobley saga goes a long way in explaining contemporary youth wandering around undefined protests like stand-in zombies for some Walking Dead episode, mumbling incoherent, baseless claims about police corruption and racism in a city that can see more than 100 people shot in one weekend while looting and mayhem unfold all around them. It explains how a collection of wholly misguided, self-righteous students could call for a ban on police officers taking classes at a school where the exoneration of Hobley was first taken up.

For remember John Conroy, the journalist who wrote so extensively about Hobley? Remember how he ignored the arson threats by Hobley documented in a police case reports weeks before an actual arson took place? He didn’t stay with the Better Government Association.

In an irony of ironies, Conroy ended up at De Paul University, teaching, of all things, investigative reporting.

Martin Preib is a Chicago Police Officer and writer. His first book, The Wagon and Other Stories From the City, was published by the University of Chicago Press. His second book, Crooked City, is available on Amazon. He recently published his third book about the Hobley arson, titled Burn Patterns. His articles have appeared in Playboy, The Chicagoan, Virginia Quarterly Review, Tin House, and New City.