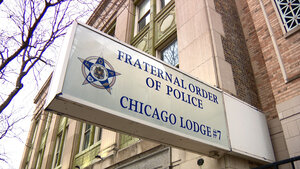 Former President Kevin Graham balked at the chance to fight the anti-police movement. Now the movement is trying to destroy the union.

Under the leadership of former presidents Dean Angelo and Kevin Graham, the union had a unique opportunity to undermine a consent decree imposed on the Chicago Police Department under the guise of Constitutional policing. That victory in and of itself would have been monumental achievement against the anti-police movement.

Unfortunately for Chicago residents, the FOP opted against mounting a challenge to the consent decree. Instead, when Department of Justice (DOJ) under Obama henchwoman Loretta Lynch first announced the DOJ was initiating an investigation against the CPD, then President Dean Angelo decided to cooperate, even though all the signs were obvious that the consent decree was a politically motivated attack on police, an attack on the police that ran throughout Obama’s administration in cities all over the country. It was obvious that the trumped-up DOJ investigation would begin with its conclusions already formed, that it would be the basis for all kinds of new policies that would handcuff police, unfairly discipline them, and turn a blind eye to the real crime and corruption in Chicago. It was obvious that the consent decree would lead to more lawlessness, violence, particularly against the very people it claimed to protect.

Always one to manage avoiding a fight, Angelo told members that FOP attorneys said it was better to go along with it, an utter falsehood. With no methodology, no statistics and only few dubious anecdotes,  Obama’s hatchet men produced the obligatory police-are-racist narrative. Angelo’s historic betrayal of  members was quickly revealed in the subsequent political upset of Trump over Clinton. If Angelo had fought the investigation, Trump’s Attorney General would have scrapped the whole ludicrous undertaking. Former Attorney General Jeff Sessions said as much after he was sworn in.

Enter Kevin Graham, who claimed he would be the fighter one-term president Angelo was not.

Graham had the opportunity to make the FOP a party to the lawsuit that would create the consent decree. As a party to the lawsuit, there were many opportunities for the FOP. The chief one was the chance to destroy the consent decree right off the bat based on the argument that state Attorney General Lisa Madigan did not have jurisdiction to file it. Madigan, after all, resurrected the Obama DOJ investigation by taking it off the trash heap Trump and Sessions had tossed it on and filed the lawsuit in federal court as the complainant.

Legal opinion on the issue was divided, but there were enough astute legal minds arguing that Madigan lacked such jurisdiction that Graham could have advocated challenging it. That move by itself would show the public and the members of the FOP that their union was willing to fight for them.

Nevertheless, there were a multitude of other opportunities for the FOP if it became a party.

One was to undermine the narrative of the police-as-racist criminals now reverberating throughout the country and used to justify the lawlessness throughout the nation, including Chicago. As a party to the lawsuit, the FOP had the right to bring forward any evidence challenging the suppositions of the Obama DOJ’s investigation of police. This meant that the vast amount of evidence in cases going back decades pointing to false allegations of police misconduct could be introduced.

What a grand opportunity for the FOP to point out how often cops are falsely accused, how often bona-fide killers are released under false pretenses, how foolishly the city has paid out massive lawsuits on such cases. What an opportunity to restore the good name of so many detectives.

How powerfully putting forth this evidence could have refuted Obama’s DOJ and shown just how politicized the top law enforcement agency in the country had become under his leadership, evidence of corruption in Obama’s DOJ now emerging from a host of different sources. How devastating this could have been to a career bureaucrat like Lisa Madigan, showing just how far the careerist Democrat machine hacks will go to advance their political control. How clearly it would have illuminated the corruption of the city, county, and state elected officials.

What influence such an undertaking could have made against the city’s media machine, a primary voice in the anti-police chorus. Chicago media generally ignores cases and evidence that contradict their narrative. But how could they ignore this evidence submitted in the federal court? What an opportunity to hold the Tribune and Sun Times accountable.

This legal strategy, possible only if the FOP had become a party to the lawsuit, would not even require much work on the part of the FOP. Much of this evidence has arisen from civil lawsuits against the police in which city attorneys defending the police are positing the evidence in one case after another. Indeed, these city attorneys are arguing about a collusion between the media and anti-police lawyers in some of the cases, a claim FOP members have been asserting for decades.

It’s a sad, pathetic irony for the FOP and for Graham in particular. In one federal courtroom, the city attorneys are making the arguments on behalf of accused police, contradicting an anti-police narrative now threatening the law and order of the entire nation, and down the hall, the FOP wouldn’t even offer up the same evidence on behalf of its own members.

Former President Kevin Graham justified this wholesale betrayal of the union on the grounds that becoming a party to the lawsuit could expose the FOP contract, but even Judge Robert Dow from the outset said the consent decree could not undermine a collective bargaining agreement. Nevertheless, as critics predicted, the overseers of the consent decree did push initiatives the Lodge claimed infringed on the contract. The union spent massive amounts of money fighting one single issue after another, so Graham’s chronic claims about protecting the contract turned out to be another canard.

And what followed? The anti-police movement, not confronted in any way with their claims about the police, let loose a torrent of violence and chaos the nation has never seen before. American cities are beginning to look like ghost towns save the for the incessant, record number of shootings. The anti-police radicals have ensconced themselves more deeply than ever in the Democratic Party, which is now leading in the national polls for the presidency.

As if that is not enough, they are now calling for defunding the police and getting clueless, weak elected leaders to go along with it.

And they have started a movement to eliminate the last remaining institution to protect the rights of police officers:  Police unions.