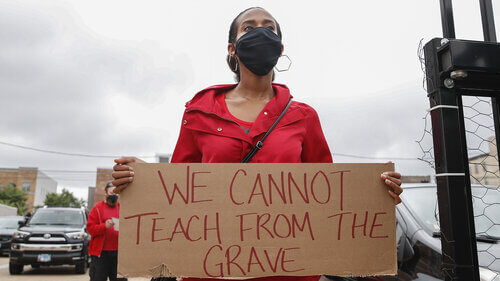 The line between CTU member and political activist has become shadowy.

The knowledge, Jesse Sharkey recently averred on Twitter, over whether the Chicago Public Schools (CPS) intended to resume remote learning for the fall of 2020 would allow Chicago Teachers Union (CTU) members with time to plan for students.  A man so phony you can see the wheels turning inside his head, Sharkey, who serves as president of the CTU, had spent weeks campaigning for the City of Chicago to commit its pupils to virtual learning.  An impeccably crafted plan, it worked:  In a monumental capitulation to the CTU on August 5, Mayor Lightfoot and CPS Chief Executive Officer Janice Jackson announced all students enrolled in the CPS will continue with virtual learning to begin the school year.  The fall term is scheduled to begin on September 8.

In announcing the decision to discard a hybrid learning plan drafted by the CPS and abide by remote learning, Ms. Lightfoot and Dr. Jackson cited public health concerns and criticism from parents, few of whom planned on returning their children to school.  Though in her address Mayor Lightfoot shrugged off media speculation she yielded to pressure from the CTU, the decision for the mayor and the CPS to remain committed to remote learning rests entirely with the gust of rumors blowing through Chicago the CTU would convene a meeting of delegates to weigh staging a strike.  Rather than endure protracted negotiations and the probability of another disruptive strike, Lightfoot appeased the same wolves who fleeced Chicago taxpayers for $1.6 billion over the next five years after a crippling 11-day strike in 2019.  A foolproof if unsavory tactic by the teachers union, for Ms. Lightfoot to succumb to the CTU’s gambit essentially revealed the basic terms under which the mayor and the union have co-existed.  In sum, Ms. Lightfoot was frightened of crossing the CTU.  An unenviable position for any elected official, the bind in which Ms. Lightfoot was placed by the CTU is a familiar one, but amid the COVID-19 pandemic, the threat of a strike was just one more bargaining chip to be thrown into the pot to achieve its goals.

While the CTU depicted its position to adhere to remote learning as both laudable and strictly limited to health concerns, the union had a myopic desire to achieve an end greater than virtual learning for the fall semester.  An objective found on a calendar, it was Dr. Allison Arwady, who, during her turn at the podium on August 5th, uttered words Sharkey and his CTU disciples greeted with unrestrained jubilation.  Though Arwady had earlier estimated the coronavirus posed no risk to pupils “with the appropriate procedures in place,” it was her good-faith submission the shift to the hybrid learning model originally planned by the mayor and the CPS could occur at the earliest after November 9.  A date which marks the beginning of the second quarter of school, this day falls after the November 3rd presidential election.

To grasp the significance of Arwady’s statement, it must be understood teachers’ unions remain among the largest source of donations for the Democratic Party.  A relationship so warm endearment has come to characterize the bond between the two, in 2019 alone, the combined total of donations to Democrats from the American Federation of Teachers, of which the CTU is an affiliate, and the National Education Association, exceeded $25 million.  A kinship which implies teachers’ unions are effectively chained to the political Left in this country, in Chicago, the CTU itself is awash in cash, with some $27 million raised in 2018 alone.  A dirty little secret the CTU prefers to keep under wraps, with deductions from the pay of their members, the CTU doles out financial support to numerous Chicago-area groups.  Among the beneficiaries of CTU member dues are Grow Your Own Illinois, Arise Chicago, Crossroads Fund, Young Chicago Authors, Action Now, and Community Organizing and Family Issues.  Groups which tilt to the radical Left and some of which have ties to Black Lives Matter or pro-anarchy group Antifa, the contributions from the CTU to these fringe organizations have very little to do with the rights of members or their political preferences.  While it may appear peculiar the CTU would find common cause with groups occupying the margins of political discourse, an answer to why is fairly obvious:  Numerous CTU members also enjoy affiliations with these radical groups.  This is behavior which reveals the CTU and its members have a broader agenda than simply representing unionized educators or educating students.  Though many CPS educators go to great lengths to camouflage their true aim, the mere fact many freely express a reverence for socialism and Marxism on social media platforms or overtly participate in political activities with radical groups is telling.  This admiration for radical political theory, the creation of highly politicized atmospheres in the classroom, and the politicizing of instructional material strongly suggests they are political operatives masquerading as impartial educators.  Political activity the sort of which the CTU extols among its members, it is likewise fairly common to see the official CTU Twitter account routinely broadcast its political views by re-tweeting articles found in Jacobin magazine, HuffPost or forwarding the hateful words of Representative Ilhan Omar (D-MN) or Black Lives Matter.  Though most of these undertakings have no bearing in the education realm, if this frenetic political activity among CTU members is taken into account, there is every reason to believe the thrust behind the CTU’s demand for remote learning rests with the teachers union’s desire to provide its members sufficient time to work assiduously for Joe Biden’s campaign for the presidency.

To the CTU and its members, the election of Donald Trump to the White House was a black swan event.  A moment which triggered explosive emotions, since November 8, 2016, Chicago educators have incessantly shrieked apocalyptic visions if the president is returned to office in November 2020.  To the CTU and many of its members, no effort should be spared to unseat Trump.  In addition to its financial support for Democratic Party and Left-wing causes, the CTU intends to act as political muscle for Joe Biden.  With the shift to remote learning for the first term of the fall semester, CTU members are now largely relieved of teaching responsibilities and have no intention of being confined to their home or burdened with the mundane tasks of teaching online.  A sort-of political recess, instead of returning to the classrooms, Chicago’s public-school teachers will be on the streets again, engaging in political activity on behalf of the Democrats, at full salary and at the public expense.