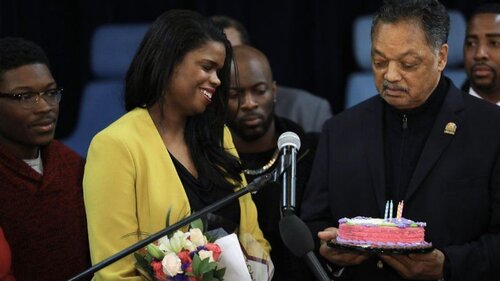 From the crown of her head to the sole of her foot, Kim Foxx is dishonest.

Having been subject to months of headlines critical over her mishandling the Jussie Smollett case, Cook County State’s Attorney Kim Foxx cunningly avoided trouble by secluding herself from the prying eyes of the media and the public. After spending the last month slowly and carefully returning to the public arena, Foxx re-emerged fully to roll out her re-election campaign with a digital ad on November 19. A stick-in-the-eye campaign video, Foxx spent two minutes and eleven seconds polluting Chicago’s political atmosphere, taking aim at her critics in a series of foul imputations and half-baked innuendos, and by resurrecting historical grievances.

In the attempt to avoid turning the sub-optimal Smollett incident into a disastrous one, Foxx spent a greater part of the days following the release of her digital ad chatting with Chicago’s obedient and obliging media. An apology tour without the apology, in a series of phone, podcast and sit-down interviews with WBEZ, WGN, and local CBS and NBC affiliates, Foxx responded to legitimate lines of inquiry over her record with unpersuasive, lengthy, and at times lawyerly answers. Interviews which were carefully staged and tightly controlled, Foxx avoided any real slip up by reading from the same script and uttering her preferred catchwords “resources,” “low-level offenses,” “transparency,” and “reform” in every interview. While no questions directed at Foxx could be considered off limits, in a hectic moment (4:28) which serves as a reminder the din of the Smollett scandal remains deafening, a Foxx adviser seated off camera sternly warned NBC Chicago’s Pan-Am smiling Mary Ann Ahern to “move on” when Ahern attempted to pursue the inept prosecutor over Smollett. A risible scene, Ahern did retreat; and Foxx continued with her answer, but offered nothing new or meaningful.

Though Foxx’s availability to Chicago’s media made plain the fact her campaign for re-election was functionally underway, if there is one takeaway from her blitz media appearances, it is Foxx’s return to office hinges on her ability to successfully omit or blur facts and advance multiple fictions as truth. While most politicians’ re-election campaigns are founded in a record of advancements in office and principled positions, the fulcrum of Foxx’s re-election bid rests on four vital lies surrounding the Fraternal Order of Police (FOP), the prosecution of violent crime, criminal justice reform, and Smollett.

Lie number one: The FOP is affiliated with white nationalism.

A fabrication with roots in an April 1 protest outside Foxx’s office, Cook County’s inept prosecutor revived the falsehood the FOP’s interests are aligned with white nationalism during a phone interview on John Williams’ podcast, Uncut. Asked by host Williams to clarify her criticism of the FOP (50:05), in a tone nothing short of hysteria, Foxx stated:

“What I’m talking about is what we saw back in April of this year where the union heads and their leadership, rather than choosing to talk about things that can keep our communities safe, chose to engage in antics like a march on my office with white nationalist groups, and without apology. That’s not helpful to anyone.”

An invention Foxx uttered to imply multiple hate groups are associated with the FOP, the fringe group in question, the Proud Boys, numbered four in total at the April 1 protest, and they were both uninvited and unwelcome. Facts well known to Cook County’s mendacious prosecutor, sadly the knowledge did not dissuade Foxx from cooking up the fantasy numerous hate groups find common cause and are allied with the FOP. Moreover, Foxx uttered this whopper with the full knowledge the police union had swiftly issued a statement to media completely disassociating itself from all hate groups in April.

The problem, of course, is Foxx’s statement over the FOP’s alleged partnership with white nationalist “groups” suffers from a curious contradiction: Foxx has refused to distance herself from Chicago’s comically repulsive anti-police posse and separate groups known for their hostility with Chicago police officers. While a debate rages over whether Foxx offered regret for lousing up the Smollett case, if, as Foxx affirms, she mismanaged the matter, this almost certainly means ownership for error would require a genuine form of public contrition. Moreover, this public penance would also mean expressing regret for her appearance at the obscene anti-police funfair held at Rainbow/PUSH on April 6, for implying racism was the motivating factor behind the FOP’s call for her to resign office, and publicly disavowing Bobby Rush’s slanderous comments about police.

A crucial fib she intends to lean on to secure her return to office, Foxx addressed her favorite hobbyhorse, criminal justice reform, telling Uncut’s Williams:

“What I’ve tried to do is make Cook County a model for justice reform, and I know it’s working because every Democratic presidential candidate has talked about a criminal justice reform platform that is similar to what we’re doing here in Cook County, legalizing marijuana, vacating convictions, decriminalizing poverty, and bail reform.”

A fanatical preoccupation of hers, while Foxx hyped her criminal justice reform efforts, she neglected to mention the only attention drawn to Chicago aside from its chaotic streets is the Smollett case. While Foxx was claiming her criminal justice reform policies are capturing the attention of the world, a cursory look at her policies demonstrate they are hardly work of considered thought. Reform measures which have virtually no sense of limits, have inspired no thoughtful self-reflection, and none of which have been cited as an example by candidates seeking the Democratic nomination, Foxx’s policies have introduced “catch and release,” and vacated convictions for Spanish Cobra gang member Ricardo Rodriguez, and Gabriel Solache and Arturo Reyes, whom Foxx’s office admitted were almost certainly the perpetrators in the grisly 1998 slaying of Jacinta and Mariano Soto. What remains of her overhauling criminal justice in Cook County, particularly the mention of “decriminalizing poverty,” is a slate of daft ideas couched in stale Progressive rhetoric about inequality and racism.

A convenient fiction maintained through a ruse, Ms. Foxx has steadfastly asserted under her direction the State’s Attorney’s Office has placed an emphasis on violent crime. An objective the clumsy prosecutor claims has been reached without placing public safety in jeopardy, that Foxx has achieved such a lofty goal has occurred only through the dismantlement of the administration of justice in Cook County. For readers to fully grasp how Foxx has targeted violent crime, it must be understood criminal justice reform measures have traditionally been addressed by a legislative chamber, the voice of constituents. Although Foxx has acted within the guardrails of her office, as state’s attorney, Foxx has taken aggressive action to apply her reform measures, drastically reducing or eliminating charges imposed on offenders for offenses to the law. While much attention has been paid to Foxx dramatically re-calibrating the prosecution of retail theft, Foxx similarly, but with much less fanfare, took a hatchet to the prosecution of drug crime. Swinging her axe, Foxx demolished the narcotics bureau in 2019. A unit which formerly directed drug bond court, oversaw preliminary hearings, and managed a special grand jury was re-branded the “restorative justice unit.” Similarly, in another swift stroke, Foxx dissolved narcotics special prosecutions, which had previously employed eight assistant state’s attorneys handling up to 50 cases each involving 100 grams of heroin or cocaine offenses or over 5,000 grams of cannabis. Alternatively stated, Foxx’s heralded statistical reduction in crime has been realized only by sweeping criminal behavior from the books.

An awkward case to which Foxx will always be pegged, when cross-examined by WBBM’s Dana Kozlov over her organizational and managerial competence tethered to Smollett, Foxx replied:

“In this particular case (Smollett), we did this case like we’d done many others. But the failure was we didn’t communicate well about how and why we were doing what we were doing.”

In a follow-up question posed by Kozlov over whether she would have done anything differently regarding the Smollett matter, instead of answering with a simple yes or no, Foxx externalized her well-prepared script and dodged the question entirely.

“Again, we have said we were prioritizing violent crime over non-violent, low-level offenses, and treated this case (Smollett) like we treated many others,” Foxx said.

Although deferred prosecution is a tool Cook County prosecutors have historically applied, the problem here, however, is Smollett was treated differently by Foxx. In fact, Smollett was treated with a solicitousness and delicateness afforded to no other facing justice in Cook County. A thoroughly embarrassing episode in which neither an emergency hearing was held nor did the case appear on a court docket, under the agreement Foxx’s office offered the B-actor, the records were sealed and Smollett agreed to a plea deal without having to plead guilty. Otherwise stated, Foxx attempted to pull a fast one, which revealed her to be operating a graded system of justice with one tier specially reserved for the privileged and politically connected.

Foxx has no intention of running a cordial campaign.

One can tell a good deal about a politician by his or her public remarks. An illuminating experience for Cook County voters, what Foxx’s media blitz revealed is she intends on attempting to win the support of the electorate by engaging in a campaign of insults, fabrications, and simplistic slogans.

A woman who ran for office by demagoguing the death of an armed teen in 2016, although her reform efforts may have grabbed some headlines, Foxx has been revealed to have overpromised, underdelivered, and avoided accountability. For all her huffing and puffing over criticism of her conduct in office, instead of fully admitting to any error (“I own it” does not constitute a plea for forgiveness), Foxx’s preferred defense is to blame her predicaments on an irrational hatred for her rather than face the fact a growing number of Cook County voters are wracked with buyer’s remorse over her election and record of failure in the last three years. Despite establishing an inferior record, Foxx, nonetheless, expects voters to be content enough with her first term to reward her with another.

Making a career out of lies and half-truths has worked out quite successfully for many in elected office. For Kim Foxx, it is to be the centerpiece of her re-election bid. In essence, no trick will be too dirty, no rumor too slanderous, and no half-truth too sly if it assists Foxx’s bid to be returned as Cook County prosecutor.