The Stains of Eric Zorn… 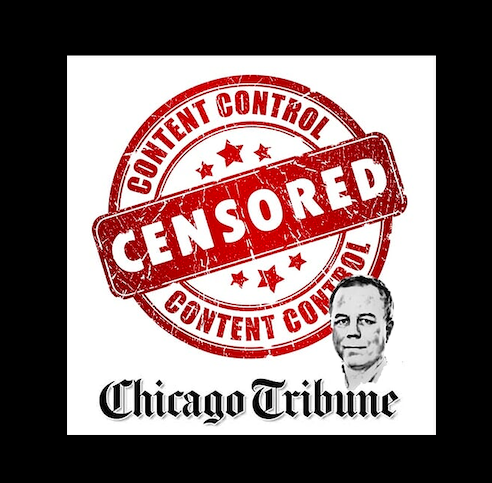 It might seem far away and unrelated to Chicago, but the scandal surrounding the actions and motives of the Obama Justice Department against General Michael Flynn might shed more light on Chicago than any bumbling articles that pass for journalism in the city.

In particular, this scandal might provide more insight into one of Chicago’s most influential media figures in the last thirty years, Eric Zorn, a columnist whose rise coincided with that of former president Barack Obama.

For as Obama rose from the outlands of community organizing on Chicago’s far South Side to being elected senator and then president, so too did Eric Zorn rise from journalist at the Tribune to columnist, spearheading, as Obama and his Department of Justice (DOJ) did, a drive to address purported police misconduct.

Now Obama is under fire, facing accusations that his DOJ willfully framed General Michael Flynn in an attempt to covertly attack President Trump. Included in those accusations are evidence that DOJ officials intentionally and illegally leaked to the media.

Well, Obama comes from Chicago, and there are certain realities about the media in the city that might explain why a president would assume the entire industry would push his agenda rather than investigate it, even if it means public servants are falsely accused. This assumption might prove to be the president’s fatal mistake, as the media in the national landscape is not the monolithic, activist media Obama came from in Chicago.

But back in Obama’s hometown, it’s a different story. Here, the media’s political agenda, so closely allied with Obama’s in its anti-police mania, is in full swing, particularly with Eric Zorn.

So it is with a strong and familiar mix of the usual disgust, shock, eye-rolling, and nausea that many police officers, prosecutors, and plain old citizens read Zorn’s recent column about the election of a new president at the Fraternal Order of Police, John Catanzara. Citing the record of complaints against Catanzara from a “news” source supported by the civil rights law firms that have scored hundreds of millions in settlements from supposed police misconduct lawsuits, Zorn wrote this whopper of pure claptrap:

“Over the years, many men and women in blue have concluded that I and other reporters and columnists who cover wrongful convictions and misconduct allegations don’t like or respect those in law enforcement.”

“Not true. Holding the powerful to account is one of the key roles of the media, and criticism of bad actors should never be seen as disrespect for the vast majority who perform with integrity the important, dangerous work of enforcing the law on the front lines.”

“But even if it were true, nothing I or my fellow journalists have ever reported could have created a bigger stain on the uniform than the elevation of Catanzara to head the police union.”

It would take perhaps several volumes to chronicle the myriad examples that would undermine these clearly absurd statements by Zorn. Those volumes are yet to be written, but they need to be. They need to be cited in journalism courses to illuminate for coming generations how much damage can be done to a republic when the media reinvents itself to serve the narrow interest of a political faction.

Let’s take a look at some of Zorn’s biggest stains on the Chicago Police Department that pale in comparison to anything ever committed by a current FOP member.

Early on in his career, Zorn began working closely with a Northwestern journalism professor named David Protess, who had an uncanny ability to obtain retracted witness statements in cases where Protess and his students claimed men were wrongfully convicted through the machinations of corrupt police officers.

These were not jaywalking convictions. They were vicious murders and rapes, among the most cruel crimes one can imagine.

In what could be fairly called the golden age of Zorn’s career, the Tribune columnist wrote extensively about these cases brought forth by Protess and his students. Many offenders walked free after a Protess investigation and several self-righteous articles by Zorn bolstering Protess’ claims.

It all went swimmingly until 2005, when Zorn’s writing on the biggest wrongful conviction case in the state’s history imploded in court. Anthony Porter, exonerated for a 1982 double murder, was seeking millions in compensation for the supposed wrongful conviction. The trouble was the detectives in the case stood tall and demanded that Porter’s lawsuit go to trial. They maintained that Porter was guilty, and they convinced their attorney, Walter Jones, to try the case on the theory that Porter was in fact the killer. Jones did so and won.

After the verdict, Jones announced to the befuddled reporters that Porter was the offender in the murders. Zorn, who to this day has never interviewed or attempted to interview the lead detectives on the case, threw perhaps the most infamous hissy fit in the history of Chicago journalism the following day, captured in a column he wrote attacking Jones for daring to contradict the Northwestern innocence claim:

“Yet Tuesday, shortly after the jury’s verdict was announced, Walter Jones, the attorney representing the city, pointed to the table in the courtroom where Porter sat during the trial and told Tribune reporter Charles Sheehan: “The killer has been sitting in that room right there all day.”

“It was a stunning, graceless and infamous accusation.”

“We know this because the first people to go to the South Side park and re-enact the crime—a group of student sleuths from Northwestern University—proved that the witness who fingered Porter couldn’t have seen what he said he did from where he said he was standing.”

“We know this because the Northwestern team found an alternative suspect, Alstory Simon of Milwaukee, and Simon gave a detailed, 10-minute confession on videotape when private investigator Paul Ciolino went to his house and confronted him with evidence against him.”

Can you feel the sympathy and respect for the police just oozing of this tirade? Here’s what attorney Jones, claiming that Zorn had not even sat through the trial and heard the evidence, had to say about Eric Zorn:

More recent stains exist, as well. Protess left Northwestern in a scandal in 2010, the university refusing to allow him to teach his class anymore after evidence arose that he wasn’t telling the school the truth about his investigations. So Protess created his own Innocence Project and got students from Northwestern to volunteer as investigators.

One case they worked on was the 1982 gang rape and severe burning of Karen Byron. Stanley Wrice was originally convicted of the crime, but he was released on the claims that detectives coerced statements.

Wrice and his attorneys went before a judge to get a certificate of innocence, but the judge rejected it, saying he thought Wrice was guilty of the crime. In particular, the judge cited what he said was a suspicious witness retraction in the case after the witness was visited by student investigators working with Protess at his Innocence Project. This witness had not changed his story in decades after multiple interviews.

Zorn and his Tribune remained largely silent about the judge’s rejection of Wrice’s innocence certificate and his key ruling and statement about the suspicious witness recantations. Zorn and his Trib never tied the case to a potential pattern and practice theory against Protess. Later Zorn and the Trib would ignore testimony of Wrice’s neighbor who said she was repeatedly raped by Wrice beginning when she was fourteen.

Zorn and the Tribune’s refusal to dig deeper into the investigations of Protess and the wrongful conviction movement have allowed its advocates to avoid a media accounting no accused officer could ever hope to escape. In doing so, they potentially poison jury pools because the public is not getting the other side of the narrative, only a relentless anti-police narrative.

The crucial checks and balances crumble when the media become activists.

Indeed, how many jurors in the Wrice trial, which resulted in a $5 million verdict to a man who may very well have raped and almost burned a woman to death, ever learned about the misconduct allegations in the wrongful conviction movement?

So, stains on the Chicago Police Department? Is that some kind of depraved joke?

Then there is a current federal lawsuit brought by attorneys representing Tyrone Hood, whose sentence for murder was commuted without explanation in the waning moments of Governor Pat Quinn’s scandal-plagued administration. In this case, city attorneys are directly attacking the media for promoting what they argue is a false exoneration claim

The former detectives in this case have been on the radar of Zorn and his cohorts at the Tribune for decades, with Zorn and his disciples claiming that these detectives have also coerced confessions from suspects.

Where are Zorn’s articles on these bombshell allegations by city attorneys:

These cases are just a sampling of so many that eviscerate claims that Zorn, despite his hollow, conniving claims, doesn’t hold an intense “win at any cost” antipathy against the police. They also illuminate clearly just what the progressive media has become in the era of Zorn and Obama.

Not only has this progressive media irrevocably stained the Chicago Police Department, it may very well have stained the federal institutions as well.

Ask the detectives who have faced the wrath of Zorn’s petulant attacks.