Where is the U.S. Attorney in Foxx Corruption? 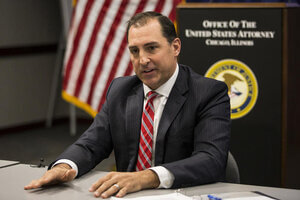 Across the nation, police perceive a growing threat to their safety in the wake of false and unrelenting media claims that the police are out of control and racist. What hangs over many police departments is the murder of five police officers that occurred in Dallas in 2016 shortly after the fatal police shooting of Alton Sterling in Baton Rouge, Louisiana.  Naturally, a media frenzy and protests developed after Sterling’s death.

But nowhere is the threat against the police intensifying more rapidly than in Chicago. The reason is that Chicago is controlled by a radical progressive prosecutor in league with the city’s anti-police movement and hellbent on waging a war on police officers.  It’s a war that will only result in an increase of violent crime and lead to an increase in attacks on police officers.

The latest brainchild cooked up by Foxx against the police is her announcement of a new website allowing people to file complaints alleging criminal conduct against police officers.  With the creation of the website, Foxx is not just dropping charges or releasing gang members back to the street with little or no bonds so that they continue the rampant bloodshed that has made the city an international disgrace, she is setting up a direct line between the gang members on the street and her office to transform criminals into victims and police into criminals.

Why not? Chicago, after all, is the epicenter of a magical transformation, where murderers and rapists are released from imprisonment only to become enriched by Chicago tax dollars.

Foxx’s latest epiphany comes just after she announced that her office would drop charges against those arrested during the George Floyd “protests.”  This decision includes dropping charges of aggravated battery against police officers and charges against those accused of looting and destroying neighborhoods Foxx deceitfully claims she is fighting for.  Foxx put up arbitrary conditions to justify dropping the cases, such as saying she would drop charges in cases in which officers were the victim of battery or assault if no body-worn camera evidence could be produced. Certainly Foxx knew in imposing this condition, which is not part of the statute itself, that officers did not have access to body cameras throughout much of the chaotic week of “protests” that has left much of the city boarded up, closed, and lifeless.

In justifying the website to frame cops, Foxx’s buzzword for yet another attack on the criminal justice system she once falsely swore to uphold is “accountability.”  This is a rich claim considering her administration has been so filled with evidence of back door deals, political favors, patronage, and outright fraud.  If Chicago had a functioning, independent press, it would seize on Foxx’s claim as nonsense and crank out one story after another or an opinion piece on top of another pointing out the absurdity of Foxx’s statement she is running a legitimate prosecutor’s office.

But Foxx’s latest transparent attempt to bypass any hint of due process for police officers is a chilling sign  that Chicago is quickly and dangerously moving toward chaos.  In the wake of this move by Foxx, along with all the other evidence that she has allowed her office to be controlled by Chicago’s anti-police movement, one question continues to emerge:  Where is the U.S. Attorney for the Northern District of Illinois, John Lausch?

There is more than enough evidence for the Department of Justice (DOJ) to initiate an investigation against Foxx, as well as explore other avenues to combat Foxx’s lawlessness.

One: Foxx’s decision to drop arbitrarily drop charges when police are the complainants or victims is a violation of the officers’ rights. This is ground enough for Lausch to get the DOJ to confront Foxx. On what basis does Foxx decide what laws will be upheld and why?  What right does Foxx have to virtually declare through her office that it is open season on police? At the very least, Lausch could take up the cases that Foxx refuses to prosecute or he could call for a special prosecutor in any case in which the police are the victim or complainant.

Two: Lausch has ample evidence to frustrate another powerful tool of Foxx’s war on cops: Her arbitrary decision to release convicted killers from prison on highly suspicious claims of wrongful conviction. City attorneys have posited strong legal theories in federal lawsuits rebutting claims of false imprisonment. These claims often gain traction among the public through the assistance of Chicago’s media that gives credence to an innocence narrative that relies more on claims of police coercion and pays little attention to evidence of the offenders’ guilt.  That Foxx has reversed the decisions of her predecessor, Anita Alvarez, who upheld these convictions, is enough to attract the wary eye of federal authorities. But Foxx has vacated convictions of some offenders represented by attorneys who supported her election. This fact should sound alarms throughout the entire Department of Justice, particularly when evidence that these exonerations are illegitimate is readily available as cases are litigated in federal court, brought by city attorneys defending the police officers who put the offenders in prison to begin with.

Three: The Jussie Smollett case. Need anything more be said?

Four: The Special Monitor for the Consent Decree, Maggie Hickey.

Former Attorney General Jeff Sessions, current Attorney General William Barr and President Trump all courageously fought the consent decree imposed on the Chicago Police Department by Obama’s Department of Justice. The purpose of the consent decree ostensibly was to impose Constitutional policing in Chicago, but Hickey’s utter failure to bolster the rights of police officers under attack by a charlatan prosecutor like Foxx proves Trump’s DOJ claims about Obama’s DOJ are accurate: The justice system was politicized in the Obama years. Who knows better than Trump just how corrupt Obama’s DOJ truly was?

It doesn’t take anyone with an eighth-grade education, let alone an attorney, to see that Foxx’s policies, like dropping charges when police are the victims, is a war waged on the Constitutional rights of police officers. How, then, can police be expected to uphold Constitutional policing when their rights are being undermined?

A legitimate Special Monitor would have marched into federal Judge Robert Dow’s courtroom months ago and defended the police against Foxx’s machinations. So why doesn’t U.S. Attorney John Lausch?  Why doesn’t Lausch walk into Dow’s courtroom and address Foxx’s wholesale attack on every honest police officer in the city?

One reason Lausch may not have taken up a battle against Foxx are the police themselves. It was a historic blunder by the Fraternal Order of Police (FOP) not to fight the consent decree and the Obama DOJ investigation that gave it life. The lawsuit that created the consent decree was an momentous opportunity for the FOP to address the fraud upon which the anti-police movement is built, from Black Lives Matter to corrupt elected officials like Foxx who embrace their radical theories.

Now the FOP needs to focus on the myriad evidence of corruption in the Foxx administration and compel other elected officials to join the union in opposing Foxx, as well as asking Lausch to put the full weight of his office in revealing, then pursuing the corruption of her administration.

This must happen before it is too late.