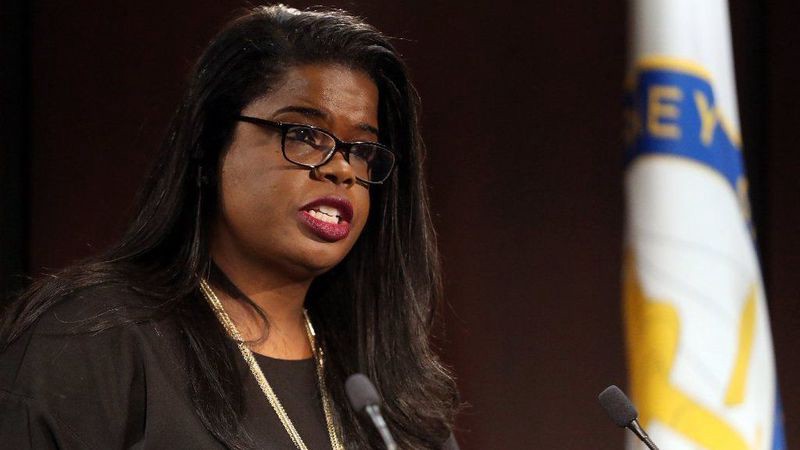 Although most Chicago residents are deeply cynical about the ethics of their elected officials, most lawmakers and appointed officials in the Windy City oddly enough do manage to avoid trouble. While Cook County State’s Attorney Kim Foxx’s burdens come nowhere near former alderman Willie Cochran, who was recently convicted for wire fraud or Alderman Ed Burke’s legal woes, her difficulties are steadily mounting. Owing to Ms. Foxx’s amateurishness and, of course, her warped “holistic” prescriptions for the prosecution of criminals, what was barely six months ago a routine legal action against B-list actor Jussie Smollett has now transformed into a botched circus act. While Smollett continues to recite from the script he suffered through a heinous ordeal, Foxx’s handling of the matter only breaks new ground in exposing her clumsiness, her hypocrisy, her two-tracked system of justice, and turning the City of Chicago into a punch line. Moreover, Foxx’s behavior incurred an embarrassing personal toll: Following Foxx’s office issuing a dispensation to Smollett, Chief Ethics Officer April Perry and Director of the Conviction Integrity Unit, Mark Rotert, abruptly departed the State’s Attorney’s Office.

While the circumstances of Smollett’s absolution remain bizarre if not altogether unlawful, Foxx’s latest uphill battle revolves around what only her gullible supporters would refer to today as her February “recusal” from the matter. Shortly after Foxx’s office dropped all charges against the former Empire actor, one of the only honest actors involved in the case, retired judge Sheila O’Brien, filed a petition demanding a special prosecutor launch an inquiry into Foxx’s office’s treatment of Smollett. Although Foxx’s explanations for her “recusal” have shifted frantically from countering false rumors she was related to Smollett to serving the best interests of the city, neither interpretation of her actions is entirely convincing. However, while Foxx was engaged in mitigating the damage wrought, O’Brien’s case was swiftly winding through the Cook County court system. Finally reaching the courtroom of Judge Michael Toomin, in a June 21 decision, Foxx discovered the Cook County State’s Attorney’s Office may be her manor, but she would have to abide by the same rules as do peasants. In a 21-page ruling reprimanding Foxx, Toomin determined the county’s chief prosecutor had no legal authority to appoint top deputy Joseph Magats to oversee the Smollett case, and described Foxx’s handling the Smollett case as rife with “unprecedented irregularities” before approving O’Brien’s request for a special prosecutor to conduct a legitimate inquiry into the Smollett flap.

Overruled by the system she is determined to dismantle, Foxx’s furious efforts to reduce the harm of her lousy judgment did not halt with Toomin’s decision: In a dire miscalculation, Foxx assumed the worst had passed and indulged in a politician’s lowest instinct, dishonesty. Searching for a villain, Foxx took the path of least resistance and scapegoated former ethics officer April Perry over Foxx’s disqualification from the Smollett case. In a statement e-mailed to media immediately following Toomin’s decision, Foxx wrote: “Regarding recusal, I followed the advice and counsel of my then Chief Ethics Officer.” A plainly ludicrous claim, Foxx was unaware the world was about to fall upon her from a great height. Outraged with Foxx’s craven mendacity, Perry re-appeared without delay to exonerate herself from the stain of scandal and in an e-mail blast to local media declared Foxx’s account of events to be pure fiction.

“My advice was that First Assistant Joseph Magats seek the court’s approval and request a Special State’s Attorney appointment in this matter. I prepared a motion and order to that effect, and e-mailed it to the First Assistant on February 20. Shortly after sending that email, the First Assistant advised me that State’s Attorney Foxx determined that the motion and order should not be filed. It is a Chief Ethics Officer’s job to provide the best advice and guidance possible based upon the facts given to her at the time. Sometimes that advice is followed, sometimes it is not.”

Bewildered by Perry’s contradiction, Foxx bore the resemblance of cartoon character Wile E. Coyote, who, scorched and disoriented, gaped with an addled mind how her elaborately-designed bomb detonated in her hands. A public humiliation to which Foxx has by now grown accustomed, her insistence on uttering lies brought with it a hard lesson: Cook County’s self-serving prosecutor learned Ms. Perry is a former courtier whose allegiance rested not with her one-time employer but to the truth. Moreover, Perry’s public scolding also served as a teachable moment for Ms. Foxx, who discovered the former ethics adviser has a less-than-sterling regard for her former boss. Since Perry delivered her rebuke, Foxx has clung to her fabrication like a security blanket and declined to offer a rebuttal, preferring refuge in fundraising for her re-election bid.

Oversight and accountability for thee, but not for me.

Although Ms. Foxx’s flat-footed attempt to publicly disgrace her former ethics officer revealed the ease with which she was willing to bear false witness against a former aide to redeem herself, it also provided a window through which Chicago residents caught a glimpse of Foxx’s glaring hypocrisy. Despite the fact Judge Toomin’s ruling presented no evidence Foxx was entangled in a conflict of interest, the court decision put the brakes on Foxx popping the cork on cheap bubbly and swinging from chandeliers by sanctifying Judge O’Brien’s petition for a special prosecutor. Elated with the judge’s ruling no conflict was found, Foxx’s triumphant statement to Chicago media turned dyspeptic as Foxx made it a point to express her displeasure with the fact Judge Toomin forged ahead with the sanctioning of an outside review.

“I respectfully disagree with the court’s conclusion that, in the absence of any conflict, the appointment of a special prosecutor is required. As always, I remain committed to transparency, justice, and the public safety of the communities we serve,” Foxx’s statement read in part.

The paradox here is Foxx protesting the appointment of an independent investigator following the court ruling on June 21 suffers a terrible contradiction from her editorial piece appearing in the Tribune in late March and in public statements she delivered at the anti-police pep rally at Rainbow/PUSH in early April. A previous position of which Foxx openly contended she heartily welcomed an outside appraisal of her office’s disastrous handling of the Smollett matter, the sharp reversal after the judgment of the court plainly demonstrates Foxx believes it is beneath her dignity to be held accountable for her bearings while presiding over the Smollett matter.

An inconsistency yanked from the pages of a wily politician’s dog-eared playbook, Foxx’s assertion raising doubt over the efficacy of an outside probe implicitly suggests Chicago’s celebrity prosecutor considers any examination into the Smollett flub beyond the inquiry conducted by Cook County Inspector General Patrick Blanchard to be superfluous. An irony of ironies, for all of Foxx’s rote incantation over “accountability,” stale platitudes about the need for “transparency,” and her worn out cliché on the subject of “fixing a broken system,” Cook County’s bumbling prosecutor is disputing the need for further oversight of her behavior in office while relentlessly demanding it elsewhere. For Foxx to cry foul over Toomin’s ruling is rich: Shortly after assuming her post in 2016, and in the name of “accountability” and “transparency,” Foxx immediately used the power of her office to draft and see through to passage legislation expanding the realm of the State Appellate Prosecutor to include reviews of fatal shootings involving Chicago police officers. Another stratum of inspection adjacent to existing oversight Chicago police encounter after involvement in fatal shootings, Foxx insisted in 2017 the review by the appellate prosecutor was an essential safeguard against potential corruption. A curious contrast with her opinion balking at Toomin’s decision over a special prosecutor rummaging through her office, after the events of the past six months, we suppose Foxx could be accurately described as a liar or a hypocrite. Indeed, why choose?

At what point are we to finally take Kim Foxx at her word?

The holier-than-thou routine doesn’t suit Ms. Foxx. After two years in office and so many failures, if nothing else, what the Jussie Smollett matter tells us is Ms. Foxx is not by a long chalk a systematic woman, but rather an improviser. One of the more blundering persons ever to hold public office in Chicago, Foxx’s haphazard conduct in the wake of the fallout over Smollett reveals her as a sloppy fibber, fundamentally unserious about enforcing the law, and unfit for office.

Although Ms. Foxx publicly maintains the condition of the State’s Attorney’s Office under her direction is all tickety-boo, she fails to recognize how the floor is crumbling underneath her. In the past six months alone, in addition to losing two key aides, a current assistant in her office anonymously penned a mortifying opinion piece spilling embarrassing secrets in cwbchicago.com, a former election foe rhetorically bludgeoned Foxx in the Tribune, and crime rates remain virtually consistent with the onset of her term.

Worse for Foxx is the fact Chicago’s lazy media is, for once, not engaged in its customary practice of “oh-look-a-squirrel” to conceal Foxx’s errors and misjudgments. Since the Smollett debacle erupted, the Chicago Tribune’s resident brainiac, Eric Zorn, has predicted Foxx will be ousted from office, and the appalling Mary Mitchell has expressed reservations with Foxx. In Chicago, having Mitchell and Zorn abandon you indicates support across across most Chicago media is evaporating. While Foxx still maintains backing from her radical base, she has yet to make it to the election before her record on crime and Smollett is fully litigated. Foxx’s dreadful judgment has earned her a fair share of blistering articles and op-eds, but when her term is thoroughly debated in the arena of public opinion, she may face a backlash at the ballot box.

Chicago is in the midst of a crisis of confidence in the State’s Attorney’s Office. A mistrust which is well earned, should Ms. Foxx ever be impelled to search for the taproot of the trouble, a moment of introspection will reveal the fault rests with the seed, not the soil.