John Arena, COPA, and the Defaming of Chicago Police Officers 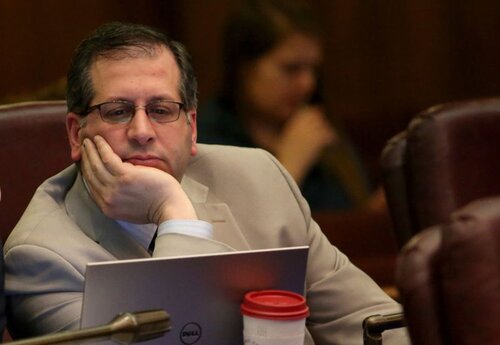 Like the party guest who just refuses to leave, former 45th Ward alderman John Arena recently returned to capture headlines. Months after he was booed offstage in February’s aldermanic elections, Arena extended his losing streak by abruptly resigning his position with the city’s Department of Planning and Development (DPD). A plum post with the DPD widely thought of as a sinecure to prevent the failed alderman from being forced to walk the streets with a begging bowl, Arena departed his office in January after it was revealed he had engaged in guerrilla activism targeting his successor as alderman. Once described by Mayor Lori Lightfoot as an “asset” to the city, the machisma mayor discovered too late Mr. Arena was not merely a liability, but an outright embarrassment.

However, in the period between Arena’s spectacular February election loss and his sudden resignation in January 2020, a curious development presented itself, a matter with which the defeated ex-City Council member will forever be associated. In early December 2019, the Civilian Office of Police Accountability (COPA) quietly revealed 29 of 31 Complaint Registers (CRs) Mr. Arena lodged against members of the Chicago Police Department (CPD) residing on the Northwest side of Chicago were determined to be utterly groundless. A noxious affair rooted in Arena’s reaction to opposition to his proposed mixed-income housing project at 5150 North Northwest Highway (5150), an abridged version of events begins with Arena ignoring residents’ legitimate and principled opposition to his proposal in early 2017. Instead of shrugging off criticism of the plan, Arena, in the attempt to silence dissent, lashed out at his critics from his official Facebook account. In a series of grammatically illiterate posts designed to portray opinions differing from his as villainous, sinister, or heretical, Arena publicly branded his detractors racist and painted a portrait of the Jefferson Park neighborhood as a pantheon of deranged bigots. A charge Arena deployed with lamentable regularity over the next two years, following his being hounded out of a community meeting addressing the proposal with residents in February 2017, Arena spent the next several months employing all sorts of ruses to advance the 5150 proposal in the Chicago City Council. Despite a few minor successes in the city’s legislative chamber, eventually the plan stalled, but opposition to the project within his ward intensified. A battle waged almost exclusively online, when residents continued to express objections to the proposed development plan on social media, Arena, his pride now a throbbing purple bruise, resolved to exact a grim revenge and damage city employees professionally. In a letter delivered to COPA dated January 4, 2018, acknowledging Arena’s office had logged an official complaint with the City of Chicago’s Office of the Inspector General (OIG) two months earlier, 31 residents of the Northwest side of Chicago, all police officers, were accused by the former alderman of transgressing CPD policy for allegedly using “racially charged” language on social media platforms.

As alarming as Arena’s misuse of public office to choke the livelihood of city employees is, the exploration into the matter conducted by COPA should shatter the illusion the watchdog agency is committed to transparency and impartial investigations. An investigation which more closely resembled a star chamber than an objective review of grave charges, from the onset of the probe in January 2017, irregularities persisted. In the first of numerous breaches to COPA’s essential principles, the 31 accused were entered under one single CR number instead of indexed individually. A feature which bespeaks a violation of investigatory procedure, among the other peculiarities surrounding COPA’s investigation included the fact few of those accused were ever formally notified they were subject to the probe, in at least one case COPA investigators demanded one of the accused reveal their political convictions, and in a flagrant contravention of the oversight agency’s founding tenets, COPA also disregarded the norm of regularly informing the accused in writing over progress during the course of the inquiry.

An obstructionist ploy COPA abused to conceal the depths of its probe and to extend the length of its investigation, it was only through the repeated filing of Freedom of Information Act (FOIA) requests did any of the accused learn particulars over the ongoing investigation. An action which exposed COPA’s shady maneuverings, FOIA requests also uncovered Arena’s office had carried out surveillance of residents, the nature of which can only be described as Orwellian. According to FOIA requests, an employee working in Arena’s office, Leslie Perkins, monitored social media activity, maintained and regularly updated an elaborate Excel spreadsheet containing dozens of residents’ names, job descriptions, city departments in which residents worked or previously worked, and social media accounts under which residents posted comments. FOIAs also disclosed Perkins had “scoured” the Web in an effort to dredge up incriminating information on the accused dating back to 2013, communication between Arena’s office and the Anti-Defamation League (ADL), and how evidence of “racially charged” comments Arena’s office furnished to COPA originated from the former alderman’s political supporters in the ward. For a case as serious as Arena alleged, in an irony of gargantuan proportion, FOIAs exposed the fact the former alderman’s case against the police officers crumbled under scrutiny: E-mails between Ms. Perkins and the ADL showed the liberties group disputing the validity and severity of the residents’ social media posts. Apart from the ADL raising doubts over Arena’s ridiculous allegations, another factor which nullifies the legitimacy of COPA’s investigation is the oversight agency refuses to tender to the accused written verification Arena’s charges have been determined to be unfounded.

You can’t shame the shameless.

Even from a distance of two years, this entire episode remains difficult to stomach. A reckless attempt to destroy the lives and careers of 31 Chicago police officers, John Arena’s throw at the dice to mute criticism of his plan to build a Progressive Xanadu in the 45th Ward was an assault on free speech. While posing as a de-facto moral censor, Arena overlooked free speech is a fundamental right secured in the American political compact known as the Constitution, free speech is an important tenet to a free and healthy society, and free speech applies to all private citizens irrespective of their career. Furthermore, while attempting to brutally suppress private citizens’ freedom of expression on social media, Mr. Arena also ignored the First Amendment guarantees freedom from governmental suppression of thought and the expression of ideas, regardless of whether the ideas in question are revered or despised. Last, Arena dismissed the fact a government agency and public official cannot and should not have the power to subordinate individual liberties to their personal sensitivities.

If we move past Arena’s assault on free speech, it is also important to note how Mr. Arena’s petty rage with opposition to his 5150 plan inspired him to transform his ward office. An office the purposes of which was outreach to constituents, following residents’ backlash against the Dear Leader’s wishes, Arena converted his ward workplace into a fortified bunker from which he and political aide Leslie Perkins amassed and stored political intelligence on residents. A task achieved through the preservation of a database complete with the personal particulars of the 31 accused, the mere fact Arena’s office cobbled together such information should raise eyebrows over the potential abuse of office, city property, and use of official time to perform non-official chores. Beyond questions arising over the likelihood a city employee may have engaged in non-official duties while on city time, a lingering question remains whether Arena or anyone in his office became absorbed in dubious contact with COPA as the investigation occurred. While no evidence has been produced to suggest either Arena or Perkins used a labyrinth of back channels to conspire with COPA to substantiate the false charges, no evidence has emerged to indicate either Arena or Perkins did not trespass over ethical limitations to pursue the cases against the police officers. Worse, as the investigation protracted and many of the accused retreated from political conversation on social media, residents in the 45th Ward allied with Arena subjected the 31 accused to a campaign of online harassment. Although no verification exists to demonstrate Arena himself or any city employee in his office personally directed surrogates to conduct online reprisals, a gaggle of poorly socialized, unruly, and functionally illiterate troublemakers are known to rattle around in the bleaker corners of Mr. Arena’s political hive. A bevy of political hoodlums known to abide by Mr. Arena’s radical Progressive ideals, by virtue of the fact Arena is leagued with such a crowd, we cannot foreclose the possibility Arena did play some role in online retaliation.

As unsettling as Arena’s use of his former office was, it is also worthwhile to explore the possibility Mr. Arena’s and Ms. Perkins’ actions may have courted legal jeopardy. Charges which the accused have long contended were inspired by the politics of grievance and leveled by souls crying for revenge, to willfully table a false complaint against a peace officer carries with it some rather stiff legal ramifications. Under the Uniform Peace Officers’ Disciplinary Act, (50 ILCS 725/3.8), section (b) reads:

Hardly a narrow classification, both Mr. Arena and Ms. Perkins likely fall under “anyone” according to Illinois’ written code. As well, consistent with FOIAs, there is every indication Ms. Perkins personally endorsed the 31 sworn affidavits which are legally required in the wake of an official complaint. If the eager beaver Ms. Perkins was motivated by private grudge over her public duty or the truth, the next thump of a letter on her doormat could bring the unwelcome news a perjury charge looms.

John Arena should forever be tainted as a determined demagogue.

All of this is rather sickening, and Mr. Arena is due all the opprobrium he is receiving, perhaps more. A string of events between 2017 and 2019 which demonstrate Mr. Arena refused to discuss the 5150 issue in a responsible way, Mr. Arena’s actions against 31 residents represents a dark, unprincipled side of Chicago’s political character which many residents have grown to detest and dread.

John Arena’s decision to file the complaints against 31 men and women who both serve the city and reside on the Northwest side of Chicago was not founded on principle or sound leadership, nor was it either random or semi-conscious, but rather a savage attack to flog his critics. A classical-model demagogue, Arena spent his final two years in office distorting the truth to build power. However, what is particularly abominable with Arena’s behavior is the fact he consciously exploited race, an issue to which police have been particularly vulnerable, for his political gain. An attempt to permanently tarnish the reputations of his opponents and blacken the image of law enforcement, by adopting the lunatic tactics and language of anti-police activists John Arena should always be remembered for cynical gambits to advance his ideological objectives at the expense of neighborhood comity.

A man who led the 45th Ward into one of the darkest chapters in its history, residents on Chicago’s Northwest side should never expect the former alderman to offer an apology, issue a retraction, or make any correction. That is the John Arena way.