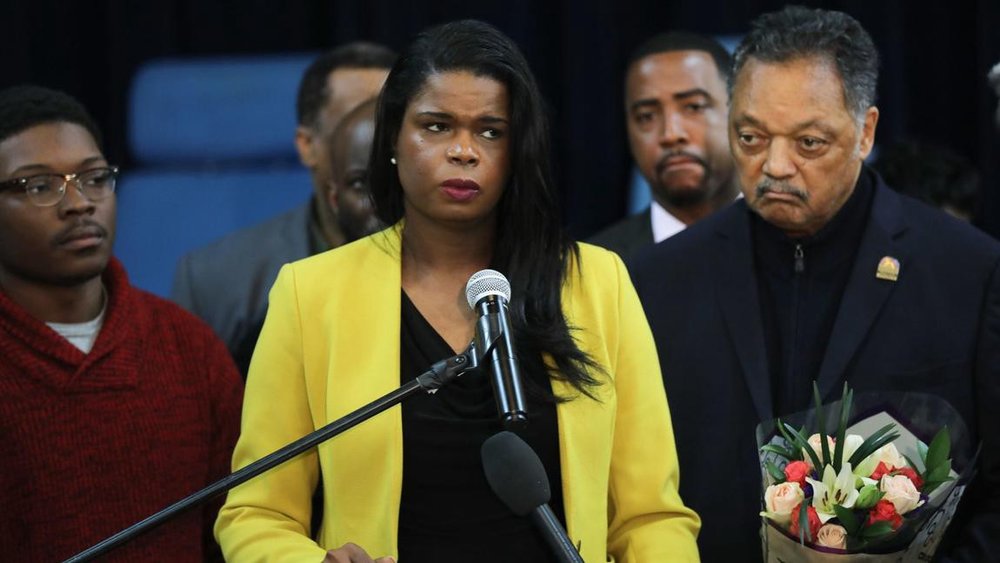 Quack clergymen, anti-police activists, elected lawmakers attempt to dig “Crimefightin’ Kim” Foxx out of the wreckage of the Smollett fiasco.

It’s been a rollercoaster few days for Cook County State’s Attorney Kim Foxx. Weeks after a Cook County grand jury indicted Empire star Jussie Smollett on 16 charges of disorderly conduct for staging a hate-crime attack near his Streeterville home, in a head-snapping reversal on March 26, Foxx’s office announced it had dismissed all charges against the budding thespian.

Citing Smollett’s forfeiture of a $10,000 bond and performance of community service with Black AIDS Institute (BAI), City Lights Orchestra, and Rainbow/PUSH Coalition, in which he hawked Rainbow/PUSH attire, Kim Foxx’s office stated Smollett would face no further punishment for his peculiar involvement in the phony attack. A curious departure from legal norms even for Foxx and Chicago, under the agreement Smollett attorneys negotiated with Cook County prosecutors, the actor was not required to admit guilt for orchestrating the fraudulent hate-crime. A decision beyond parody, Foxx’s office enabled Smollett to walk out of a courtroom on March 26, piously proclaim his innocence in front of national media, pose for selfies with admirers outside the Leighton Criminal Courthouse, and allowed his attorneys to stubbornly maintain Smollett was the victim of a hate attack.

Foxx turns to her cheering section at the Tribune.

While Smollett was making a mockery of the law, Foxx was left to her own devices to confront the growing crisis. A case which offered another glimpse into the calamitous two-and-a-half-year tenure of Ms. Foxx, the abrupt decision to excuse Smollett’s Class 4 felony drew swift rebukes from the National District Attorneys Association (NDAA) and the Illinois Prosecutors Bar Association (IPBA), both of which lambasted Cook County’s celebrity prosecutor for her amateurish handling of the Smollett case. Although Ms. Foxx is a woman with dreadful political instinct, she was clever enough to recognize both the weight and velocity of the ton of offal about to drop on her to appeal to her enablers in Chicago’s media. Feeling obliged to sound off in public as the imbroglio threatened to spin out of control, Foxx re-appeared in the editorial page of the Tribune two days after the charges were dropped to “have a conversation” about Jussie Smollett. Hoping to escape the unsparing scrutiny for her incompetence and shadowy handling of the Smollett matter, in a gaudy, babbling commentary published in the dark of night on March 29, Cook County’s Progressive heroine issued a public “triple-dog-dare” to probe her office’s management of Smollett case. Zig-zagging from earlier statements in which Foxx had confidently announced the action against Smollett was grounded in such solid legal landscape it was hermetically sealed, Foxx retreated in her Tribune piece and expressed doubts over the certainty of achieving a conviction. Drifting from the commentary’s expressed intent to explain in full the Smollett decision, Foxx randomly expressed her anger and fear with those who disregard the law or falsely report crimes. Then, in a quite predictable, deliberate and unprincipled deflection, Foxx engaged in her routine blame-the-cops refrain by invoking the lingering memory of Laquan McDonald. A pitiable compulsion with roots in her animus for the Chicago Police Department, Foxx’s diversion only revealed her intent to shift the chatter from her misjudgments to enhance the non-stop opprobrium of police on any law-and-order issue confronting Chicago. An utterly unconvincing interpretation of the events of the Smollett matter, Foxx’s printed words barely disguised how she had personally countenanced the Empire star’s farcical put-on and only demonstrated her desire to perform face-saving damage control after the damage had already been done.

Chicago gets a skewed lesson in history from an anti-police mob.

While Foxx was gracelessly immersed in a campaign for self-preservation, the Fraternal Order of Police Lodge 7 (FOP) was engaged in the adult work of defending its members and Chicago residents by organizing a no-confidence vote in her haphazard stewardship of the county prosecutor’s office. A gesture which roused Foxx’s anti-police base, the vote coincided with a protest arranged by the FOP outside her offices and resulted in a unanimous decision among dozens of heads of Cook County law-enforcement agencies demanding Foxx’s resignation. Amid the spate of bad news consuming Foxx, a mood of panic among Chicago’s anti-police posse spread. A group which specializes in the art of dirty warfare, to resuscitate Foxx back to life inspired the the anti-police brigade to descend into the gutter and concoct a narrative the FOP and police had winked at the presence of a hate group which turned out to protest Ms. Foxx on April 1. Mobilizing for battle with whips and cudgels, supporters of Cook County’s legal Second Coming led by the Reverend Jesse Jackson convened an assembly at Rainbow/Push headquarters on Chicago’s South Side.

Although the April 6 rally to support Foxx was heralded as a press conference, the gathering promptly slipped off the rails and mutated into a carnival atmosphere in which several of Chicago’s seasoned anti-police operatives were joined by a handful of youthful understudies to cynically re-cycle racial incitement and lob outrageous slander at both police and the FOP. In the race to the bottom at Rainbow/Push, a procession of speakers offered statements so obviously filled with convenient fictions and digressions, it is entirely possible an unenlightened observer witnessing the spectacle unfold could have departed the event with the notion the FOP and Chicago police resembled a reptilian mob systematically involved in extrajudicial killings, racial profiling, and pillaging Windy City neighborhoods.

But from behind the Maginot Line of which Foxx’s anti-police accomplices formed to impale police and the FOP, three men distinguished themselves for their inflammatory rhetoric. Lacking the personal grace to keep it brief, the first in the roster of false prophets to denounce police and the FOP was “people’s lawyer,” Flint Taylor. Taking the podium appearing as if he had slept in the back seat of an abandoned car, Taylor ebulliently mentioned his five-decade crusade against the Chicago Police Department and the FOP, and accused both organizations of cheerfully representing Chicago’s “racist and reactionary” forces. A preposterous allegation by the activist attorney, the intrepid Taylor continued with a condemnation of former police commander Jon Burge, but failed to mention Mr. Burge deserved support from the union, Burge was tried twice, and never found guilty in a court of law for torturing suspects.

Shortly after Taylor finished hyperventilating, failed mayoral candidate and adolescent racial huckster Ja’Mal Green accelerated the anti-police tempo and attempted to pose Ms. Foxx as a Solomon-like figure culled from the Book of Ecclesiastes for her reform efforts. Failing to compose an argument in defense of Foxx with hard, uncontested facts, Green quickly pivoted and revealed himself a racial arsonist: He referred to the FOP as the “Blue Klux Klan.” Both a sickening and deeply ahistorical claim, Green’s comment failed miserably to acknowledge the police department employs and the FOP represents countless minority members.

Despite 40 minutes of intemperate and unrestrained criticism of police, no speaker invited more disgrace and ignominy upon himself personally than Representative Bobby Rush. Taking the mic early on in the car wreck at Rainbow/PUSH, Rush began by ruminating wistfully over his old adversary Edward Hanrahan and, in a stomach-turning, savage, and premeditated attack, dropped a 100-megaton nuclear bomb to help stir apoplectic rage at Foxx’s alleged tormentors.

An utterly unconscionable and despicable libel, Rush’s fabrication coarsened the tone of discourse in a way few would have previously imagined. A comment in which he overstepped prior constraints on civility, Rush’s vicious remark represents an unparalleled hatred for the FOP and police and his penetrating lust to stir anti-police paranoia. Moreover, Rush’s comment denigrating the FOP and police illustrated how the even a member of the U.S. House of Representatives cannot rise above the vitriolic noise which often passes for political discussion among Chicago’s anti-police mob. For Rush to sink this low, the radical congressman has relinquished the authority to speak on any issue related to policing or law and order, and his comments oblige formal censure from colleagues in the lower chamber of Congress.

What occurred at Rainbow/Push scarcely qualified as a press conference. An event tightly controlled by Jesse Jackson, the entire thrust of the pro-Foxx rally was to paint the FOP as verging on a hate group which has created fraternal space for and shares the common interests of white nationalist groups.

But while Foxx and her anti-police sidekicks at Rainbow/PUSH were diligently howling intentionally misleading propaganda and portraying the police union a malevolent institution, Lodge 7 had fully addressed a matter related to a hate group following a media inquiry four days earlier. In a statement unequivocally disassociating itself from a hate group, the Proud Boys, which was said to have been present at the April 1 rally demanding Foxx’s resignation, the FOP release read:

“The suggestion, implication, or even correlation that the FOP would in any way associate itself with a racist hate group is a sign of just how biased, malevolent, and extreme the media is in their antipathy toward the police.”

The FOP’s gesture, however, did not discourage the Reverend Jesse Jackson from staging the whole shabby show at Rainbow/PUSH. Despite the fact both the Proud Boys and Chicago’s anti-police movement are equivalent in principle, intent, and impact to humiliate and dehumanize specific individuals and groups, only the FOP carried out its duty to reject any backing offered by any and all hate groups. In striking contrast, at Rainbow/PUSH, Kim Foxx unapologetically consolidated a formal alliance with a venomous movement whose members rarely appeal to reason, routinely stoke outrage, heighten tension and mistrust, occasionally gin up violence, and convulse with anti-police fictions. Utterly shameful behavior, while this startlingly unqualified prosecutor was portrayed as a tragic figure, a victim of FOP machinations rather than the vain, self-regarding architect of her own downfall, by a coterie of professional anti-police provocateurs masquerading as a constituency of conscience shouting anti-police invective, Foxx stood silently in a near-vegetative state and showed no sign of apprehension. No minor gaffe, for Foxx, the chief prosecutor in Cook County, to stand stoically while the FOP and police officers were depicted as armed racists or corrupt, licensed bandits by the most-powerful figures in Chicago’s anti-police movement is not merely a tragedy, but a complete disgrace. For Foxx, an affiliation with a rowdy mob of anti-police activists is easy and natural.

However, nowhere was Foxx’s iconoclasm more evident than her insertion of race to insulate herself from the Smollett lapse. By placing a racial frame around the FOP’s call for her to resign, Foxx is consciously choosing to deepen the divide within already problematic race relations in Chicago. Although race played no role in the FOP’s decision to demand Foxx step down from her role as State’s Attorney, Foxx’s determination to superimpose a racial narrative to tamp down public indignation with the Smollett debacle is a signal she is intent on using race to stifle any meaningful dialogue over how to improve difficult relations separating police and minority communities in Chicago, and a beacon indicating her readiness to exploit racial grievances in the future to assure her survival in office. In Foxx’s mind, if she can manage the narrative, she will escape the consequences of her errors.

A woman of staggering incompetence, Kim Foxx never spoke ill of police at Rainbow/PUSH, she simply stood by and egged on a mob of anti-police race baiters do it on her behalf.