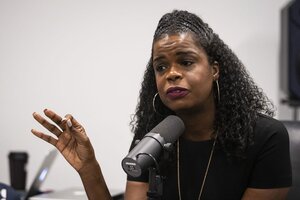 Cook County State’s Attorney’s Office should be re-named the Temple of Denial.

It is no secret Kim Foxx has never done the job she was elected to do.  Since being sworn in as Cook County State’s Attorney in 2016, Foxx has faced a barrage of criticism directed at virtually every reform measure she has imposed from her vacated convictions, favoring lower bonds for the accused, and the prosecution of firearm offenses.  Policies which are viewed by many Cook County residents as both unduly lenient and reckless, it should not be too startling to learn Ms. Foxx has directed prosecutors in her office to dismiss charges against demonstrators arrested for minor crimes committed during protests in Chicago over the death of George Floyd in Minneapolis.

Under new guidelines unfurled by Foxx, Marny Zimmer, and Joseph Magats on June 30, 13 crimes would be separated into two categories.  One category, which includes Disorderly Conduct, Public Demonstration, Unlawful Gathering, Criminal Trespass to State Supported Land, and Violation of Curfew, are charges under which Foxx’s office as a matter of course will presume dismissal.  A second category, which includes more serious offenses such as Resisting or Obstructing Arrest, Assault, Misdemeanor Aggravated Assault, Battery, Aggravated Battery to a Police Officer, Reckless Conduct, Mob Action, Obstructing Identification, are infringements to law among which Foxx’s office will not proceed with prosecution without evidence furnished from body-worn camera.

Foxx’s refusal to prosecute is a reward to the activist Left for civil disobedience.

To begin, it is virtually impossible to prosecute every crime committed, irrespective of how trifling the offense may be.  An effort to prosecute all crimes would place a lasting onus on a prosecutor’s office, which is precisely why elected prosecutors are vested with extensive authority to set perimeters, determine how and which crimes will receive less enforceable action, and converge on the most serious crimes.  Naturally, the power to apply the law in areas emphasized by a prosecutor comes at the expense of other laws, minor though they may be.  While it is a general rule for the Cook County State’s Attorney’s Office to dismiss curfew and municipal disorderly conduct violations, the circumstances which led to the thousands being charged during the George Floyd demonstrations which took place in late May into early June demand Ms. Foxx’s office commit itself to the prosecution against those taken into custody.

Violence enough the brush you back on your heels, against the backdrop of Floyd’s death, Chicago convulsed in a mass uprising.  As protests formed at the end of May, demonstrators in the downtown area engaged in loud and disruptive displays, cars were torched and overturned, monuments were vandalized, buildings were set ablaze, stores were looted, and protesters frequently fought running battles with police.  Although some legal and dignified protests did occur, it would be a colossal mistake to presume the widespread social disorder which engulfed Chicago was the work of a small cabal of rogue actors.  As demonstrations percolated throughout the city, the divisions separating virtuous protesters and those engaged in unabashed rioting and looting became blurred, with many embracing violence out of sheer opportunism and self-interest.  As night fell over Chicago, the demonstrations took on a far more unattractive character and involved wanton violence, more frequent incidents of rioting and looting, and increased clashes with police.  It was a hellish and costly moment in Chicago’s history, which briefly turned the Windy City into the world’s largest outdoor insane asylum.

Woefully for Chicago, Ms. Foxx saw none of this ugliness.  While Chicago was in the grip of savage riots, what held Ms. Foxx’s rapt attention was not the utterly implacable vileness of rioters and looters, but the constant denunciations of law enforcement, cries against alleged police brutality, and protests of economic marginalization.  As Chicago’s matron saint of social justice, Ms. Foxx declining to prosecute crimes committed during rioting is more than a wink in the direction of rioters or a quiet round of applause for looters, but her means of laureling a nasty element of the public with whom she looks favorably upon and to whom she is sympathetic.

In Ms. Foxx’s worldview, the law is an impediment to social justice and has historically failed to deal with societal ills.  Under Foxx’s deluded thinking, those who were moved to this expression of rage are part of a long-ignored, diffident movement whose daily lives are marked by poverty and repression and who have suffered unconscionable prosecution at the hands of police and Chicago’s system of justice.  To Foxx, violent civil unrest is the response to these injustices to which protesters must resort.  A woman who is obsessed with using her office to concentrate on social inequities as opposed to enforcing the law, Foxx declining to prosecute is a reward conferred to a political cause which has been nursed into existence by the Progressive Left which extols fanaticism and sees no virtue in either forbearance or tolerance with dissenting views.  A decision rooted in politics and not the law, according to Foxx’s foolish worldview, the determination not to prosecute what will likely become thousands of offenders is the state’s attorney’s method of countenancing the antics or otherwise criminal behavior of rioters and looters and treating criminal behavior as if it were the battlefield heroics of a powerless minority involved with a righteous movement.

Though Foxx views granting absolution to those culpable of rioting and looting is an entirely moral action, and her office’s intervening to prevent a miscarriage of justice, her passivity with enforcing the law is certain to incur breathtaking consequences.  Principally, Foxx’s inaction only encourages lawlessness.  An appeasement of criminal behavior, Foxx declining to pursue criminal charges enables criminals who participated in creating chaos on Chicago’s streets to perceive themselves immune from the law and only emboldens future demonstrators to project more anger, become more violent and, above all, be more uncompromising.  More dangerous, Foxx’s failure to prosecute is teaching a small circle of ignorant louts there is honor in moving straight away to violence during an organized protest.  Similarly, by insulating criminals from their actions, Foxx is inviting crime to flourish in conditions separate from public demonstrations as criminals have no incentive to halt illegal activity if they consider themselves protected from prosecution.

Equally important, for Chicago Police officers the implications of Foxx’s guidelines could be severe.  For Foxx to decline charges against arrestees, officers are now vulnerable to the charge of committing a false arrest.  A gesture which exposes officers to the possibility of legal action, Foxx’s decision allowing demonstrators to evade prosecution provides an impetus for criminals to resist arrest and assault peace officers with impunity.  Similarly, Ms. Foxx’s decision not to pursue criminal charges is unconstitutional:  No legal grounds exist for Foxx to contend body-worn camera is a condition to proceed with criminal prosecution.  A devious tactic exploited by Cook County’s prosecutor to place officers at an extraordinary disadvantage, Ms. Foxx is acutely aware officers who mobilized at Guaranteed Rate Field to respond to the civil unrest in Chicago were not in possession of body cameras.

What occurred during the George Floyd protests was criminal.  Although Ms. Foxx prefers to see the anti-social behavior illustrated by a grievance brigade as the faithful execution of noble plans, the random mayhem of rioting, looting, and attacks on police officers are criminal acts.  Prosecutorial power run amok, Ms. Foxx’s decision to drop criminal charges against rioters and looters is proof she rejoiced in the chaos created on Chicago’s streets, she views rioting and looting as sagacious and essential expressions of dissent, and confirmation Foxx has converted her office into an engine of Left-wing policy.  A raw expression of power, Foxx dismissing charges is furthermore a declaration of war on police.