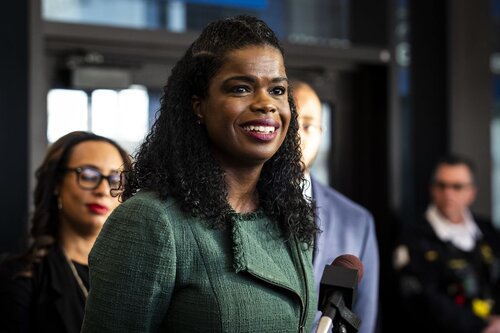 Embattled Cook County State’s Attorney dials up the diversions to 11.

Cook County State’s Attorney Kim Foxx took advantage of the opportunity to embarrass herself again, this time in a new campaign advertisement.  In a new spot Foxx’s campaign unfurled on January 27, just prior to the March 17 primary contest, Foxx raises the hot-button issues of immigration, health care, poverty, and housing.  A deflection to help Foxx avoid facing the more malignant problem of crime and violence on Chicago’s streets or the Smollett matter, for those willing to see reality, the campaign ad is Foxx’s obvious attempt to build support for her re-election by embracing a wider range of Progressive politics.

A campaign promo released ahead of two meetings Foxx held with the editorial boards of the Chicago Tribune and Sun Times on January 27 and February 4, to get you up to speed, Foxx has muddled through her first term so incompetently she has drawn three primary rivals, attorneys Donna More and Bill Conway, and former alderman Bob Fioretti.  Despite being in front of members of media who have treated her chronic blundering with cordiality in their editorial pages, Foxx discovered on both occasions when seated next to her opponents she was exposed to a grilling from both those vying to replace her and her media enablers.  Under a barrage of questions from the editors and all three primary foes, Foxx was exposed to be a bit tetchy when attempting to swerve from criticism of her tenure, particularly over gun crime, her support for bail reform, her office’s failure to responsibly prosecute retail theft, and the Smollett matter.  Unable to offer convincing explanations for her mishandling of the Smollett case, Foxx’s temper boiled; she bobbed and weaved for almost the entirety of both meetings, and in front of the Sun Times Editorial Board carelessly referred to Dan Webb’s probe investigating her office’s treatment of Smollett as a “review.”  A remark to which rival Donna More offered a pointed reminder Foxx’s office is the target of a special prosecutor for showing a casual contempt for the law, Foxx attempted to evade further withering criticism by insisting Webb’s inquiry would be harmed by publicly commenting on the matter.  A dodge, Foxx is free to discuss the ongoing probe, but has opted to remain silent over her concern any public statement would amount to auto-humiliation and reveal her untrustworthiness.

Although Foxx’s wobbly appearance before the editorial boards of the Sun Times and the Tribune did not mortally wound her re-election bid, she certainly did herself no favors in the peculiar ad her campaign released on January 27.  In the 30-second ad, Foxx apathetically gazes right through the camera to deliver some fine words on social issues and to advertise her office’s battle against the Progressive Left’s favorite bugbears, the National Rifle Association (NRA) and President Trump.  In her confrontation with the president and the NRA, Foxx haughtily declares she had the pluck to challenge the president over healthcare and immigration policy and the NRA’s objection to Cook County’s ban on assault rifles and large-capacity magazines.

While it may appear as if Ms. Foxx’s campaign has lost its bearings, this ad only signals a shift in tactics, but not strategy.  A woman with neither a robust nor comprehensive strategy to confront or defeat crime, the objective of this campaign ad is to broaden her appeal to voters through virtue signaling.  Although the new ad does not compare to the absurdity of her November 19, 2019, digital ad in which she served up the woe-is-me, self-pitying narrative, by presenting herself as a sober and practical voice on social ills, notably homelessness, poverty, healthcare, and immigration, Foxx is branding her campaign morally superior to her opponents.  A finger wag, Foxx’s ad exhorts voters to re-discover moral tradition and character, respect her for her sensitivities, credit her for her good intentions, and distinguish her for being a model of societal progress, and thereby return her to office.  An unproductive argument to justify re-election, while society’s ills are indeed marketable issues for a political campaign, the concerns to which Foxx refers have no bearing on the office she holds.  Moreover, while attempting to cast a spell with her oratory on matters wholly unrelated to her office, Foxx fails to explain how this raft of social issues should exceed the importance of her primary duties as Cook County prosecutor.

A cowardly abdication of the responsibilities of her office, while it is refreshing to see Ms. Foxx is, for once, invoking society’s scourges instead of demagoguing the death of an armed teen, reciting the name Jon Burge or shrieking over the real or perceived injustices of the past, none of what Foxx lays out in her campaign promo is in any way pertinent to her position as prosecutor.  While Foxx’s base may be jazzed with the fervor with which Foxx preaches from a social gospel and expresses an urgency with which these matters require attention, Cook County residents are owed more than virtue signaling or smarmy lectures on morality from their prosecutor.  What Cook County residents are owed is prosecutor with a passion to fulfill the obligations of her job.

All of this would be superb for Cook County residents if Foxx’s chief responsibilities were a social worker finding shelter for the homeless, finding job training for youth, or helping a legal immigrant fight deportation, but Foxx is the state’s attorney.  If we throw out percentages, a figure which should send a shiver up Foxx’s spine is the number of January homicides.  At 34 for the first month of 2020, the upward trajectory halts a two-year decline.  A figure which Foxx has routinely leveraged to substantiate her policies, if Foxx is ever moved to address crime in Chicago in a meaningful way, instead of pontificating piously about her devotion to societal problems, perhaps she could explain the upsurge in homicides at the end year three of the “Foxx miracle.”