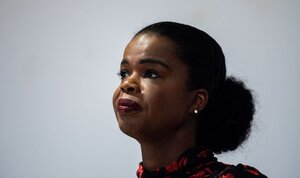 Kim Foxx is seeking re-election, but by the sound of her recent public remarks it does not appear as if Cook County’s amateur prosecutor has too many concerns over being returned to office in November.  A woman who has dispensed with any concerns over rising crime or worry about the Smollett fiasco, Foxx recently returned to the public arena to implore lawmakers to decline campaign contributions from one of her favorite bugbears, the Fraternal Order of Police (FOP).

Under a campaign launched by anti-police group Color of Change, Foxx has signed a pledge, the “Say no to money from police” campaign, vowing not to accept any campaign contribution from a police union.  Part of a broad, nationwide strategy targeting police following of the death of George Floyd in Minneapolis, the call for politicians to refuse FOP money coincides with the fetish surrounding ultimatums to defund police departments or hysterical demands some cities abolish police departments altogether.

Explaining her decision to bandwagon with an anti-police group, with pious rhetoric Foxx said in a statement her decision to refuse FOP donations was inspired by the need for elected officials to remain fully independent from police unions. Though Foxx has never received a donation from the FOP, numerous aldermen in the Chicago City Council as well as several politicians in statewide offices have.  In Chicago, three aldermen are known to have accepted FOP contributions:  Alderman Chris Taliaferro (29); Alderman Walter Burnett (27); and Alderman Nick Sposato (38).  Although Taliaferro backed Foxx’s call to decline FOP donations, he stated he would not return the $200 he accepted from the police union.  Walter Burnett, who received $1,100 from the FOP, declined comment and dodged questions over whether he would return police money.  Refusing to yield to pressure from Foxx or an anti-police group, only Alderman Sposato acknowledged $3,800 he has accepted from the FOP and announced his unqualified support for both the police union and its members.

Money talks, and the volume only rises when the money machines get cranking.  Though Ms. Foxx explained her endorsement of Color of Change’s campaign under the trite slogan “independence” between lawmakers and police is critical, it is a disguise to shut down the remaining support police enjoy in the Chicago City Council, to paint dark FOP money, and saddle police with a reputation for attempting to buy the outcomes of investigations into alleged police misconduct.  Though utter falsehoods, now is an appropriate time to lift the shroud of mist around the logistical partners involved with Ms. Foxx’s fundraising hauls.  A woman who has accepted donations in the millions from Chicago businessmen Fred Eychaner and Michael Sacks, and labor organizations such as the SEIU, a vast sum of money Foxx is reported to have raked in to become Cook County State’s Attorney has originally come from George Soros.

A man who has traded and speculated his way to amassing a multi-billion-dollar fortune, Soros has donated over $30 billion to liberal and Left-wing causes in the past 35 years.  A Left-wing moneybag, some of Mr. Soros’ profits have come from global economic disasters.  A master in the art of currency manipulation, Soros’ wealth comes at a high cost:  His career hedge fund plays often resulted in retirees living on fixed incomes seeing their pensions hollowed, while untold others were left penniless.  When the subprime mortgage crisis hit the United States in the 2000s, Soros cleaned house while homeowners in an overvalued and underfinanced housing market were turned into the street. Though Soros prefers to work deep undercover, through an elaborate constellation of foundations he is able to donate his loot to various Left-wing causes.  In Chicago, Soros’ marauding hands recently slipped $2 million into a Super PAC supporting Foxx.  The group, Illinois Justice and Public Safety PAC, spent over $500,000 in an effort to thwart Foxx’s 2020 primary challenger, Bill Conway.  A pittance from the $2 million Soros gave, Illinois Justice and Public Safety PAC is poised to spend lavishly on destroying Foxx’s opponent in the general election and Ms. Foxx is wringing her hands over a few thousand dollars from the FOP.

Kim Foxx does not have a problem with campaign cash or a political system which has declined due to the corrupting influence of unrestricted money.  Kim Foxx has a problem with police.  Though Ms. Foxx is bellyaching about the supposedly evil influence of FOP money, the real outrage is Ms. Foxx accepting money from groups backed with Soros’ money.  Unlike Mr. Soros’ bounty, FOP money springs from members’ dues only and prior to contributing to candidates seeking office, the FOP thoroughly examines candidates and votes on distributions.  Moreover, the FOP has donated to candidates of both political parties in Chicago.  In contrast, Mr. Soros’ prosperity and billion-dollar fortune can be traced to economic calamity, lives ruined, and millions lost in personal assets.

Another glaring hypocrisy from Ms. Foxx, though she is perfectly willing to accept support from groups backed with Soros’ dirty money, Foxx prefers to view the FOP donations as a sinister form of political activism.  To Foxx, vast sums of campaign largesse from a wealthy financier to groups propping up her bid for re-election are legitimate forms of political expression, but meager donations to local or state officials from the FOP are part of an “anti-American” conspiracy to defraud the republic or buy the acquittal of a police officer. To Ms. Foxx, the FOP is venal while Soros’ networks are principled.  Foxx’s pledge not to accept FOP money is every bit as much a push to shut down political speech as it is an attack on the Lodge itself. While Foxx may profess her disgust at the FOP’s money in politics, the FOP’s ideas have as much right to be heard as those of Soros’.

Ms. Foxx can deliver smarmy lectures and virtue signal as it pleases her.  Ms. Foxx can be lauded a figure of unparalleled bravery and poise for taking on those big, bad police unions on the political Right.  However, for all her criticism of police and FOP donations, Foxx fails to see the gobsmacking ignorance of her pledge:  Campaign contributions give a voice and a leg up, but it does not win an election.  Moreover, Foxx fails to see Soros still holds the whip hand over the political Left, and as long as Soros finances her campaigns, Foxx is duly obliged to bow her neck to him.